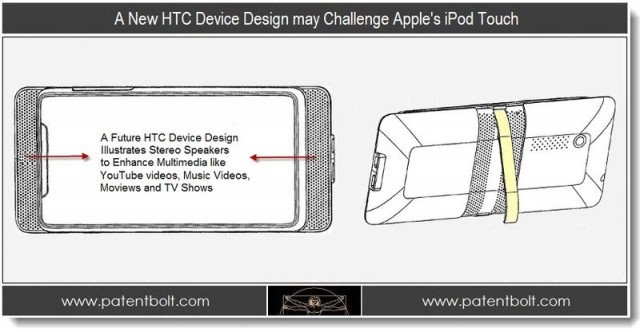 The iPod Touch reigns supreme in the baseband-less world of portable media players, but that hasn’t stopped other companies from trying to eat into that market share. Samsung has released a number of its Galaxy Player devices over the years, which run Android and provide access to hundreds of thousands of apps in Google Play.

HTC filed a patent in early 2011 which was granted this week, outlining plans for a similar such portable media player, this time with a few interesting twists. Though we can’t tell the screen size from this vague outline, the design points to two very interesting features that would make it perfect for the avid traveler.

First, there are stereo speakers on either side of the wide screen (the aspect ratio looks to be around 16:9 or even 16:10) and, around back, there is a nice vertical-facing stand.

Whether HTC will follow through with the patent and bring something like this to market remains to be seen. Its initial attempts at such a device, the HTC Surround Windows Phone, which launched in October 2010, was not entirely successful.

Would you buy a device like this, running Android, if the price was right?