Play on, Google, but you really need to fix the app search problems 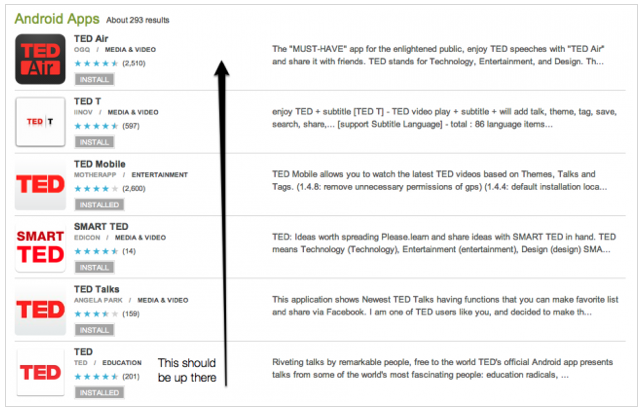 Yesterday Google rebranded its Android Market to the Play Store, but ultimately it’s the same product with a different logo. It’s also a great product, a vastly improved experience both on the web and mobile. Features like being able to download an app online and push it to your device is astoundingly convenient; being able to see a reviewer’s device and version number is common sense.

But the Play Store has a big issue, and it was one that has been brought up time and time again. As Android’s rise to popularity was somewhat protracted, companies were reticent to release official apps for their services. But as people are want to do, they filled the apps; individuals created myriad apps for services, either real or fake, with identical names and lacklustre features. But Google is the search company, and should be able to separate the wheat from the chaff, right?

On Sunday, TED Conferences released its official Android app to much acclaim. It is a stunning example of what a beautiful and functional Android app should look like, without being cluttered by overextended UI promises and confounding UX problems hiding in the menu bar. But go to the Play Store and search for ‘TED’. It’s OK, I’ll wait.

What do you see? TED should, by all rights, be the first choice in that group. Every other app, all of which have the acronym somewhere in their names, are either old (two haven’t been updated since early 2011), or poor adaptations of what the real TED organization is trying to accomplish. While individual developers should have every right to create apps to serve an unmet purpose, and unofficial apps are occasionally better than the real ones, but in this case Google has made no effort to promote the real mccoy. Indeed, if you look at the first app’s byline — “The “MUST-HAVE” app for the enlightened public, enjoy TED speeches with “TED Air” and share it with friends” — you’d be forgiven for mistaking it for the official one. Problem is, TED Air hasn’t been updated since May 1st, 2011.

But being the sixth choice, as TED happens to be, is not even that bad. A worse issue occurred when Clik was released. According to the company’s Twitter account, which spent much of late February tweeting out direct links to users, the app is basically impossible to find in the Store. Yes, the uni-syllable name is a bit generic, but it’s not spelled “click” and shouldn’t be confused as such. Google’s search algorithms, at least when using its search engine, are pretty smart and can usually figure out when you’re spelling something wrong or generally searching for a product. At the very least, the Play Store should search for the specific word and at the top ask, “Were you searching for ‘Click?'”

The Android Market has always been finicky when it comes to searching for specific apps, and there are far too many poor clones or illegal ports to know what is and isn’t safe to download. Sure, we may know better but a first-time user will likely download the first choice on the list, not realizing that the publisher name is someone’s name and not that of the company whose app you’re trying to obtain. Worse, Google seems to care little and less for this practice and doesn’t intervene unless the offending app(s) has been reported for malware.

All this is to say the Play Store has hundreds of thousands of apps, and only a few thousand good ones. As users, we should be able to more easily find the gems without having to rely on Google to put them on the ‘Featured Apps’ page.