How does the new iPad stack up to the iPad 2? Here are all the details 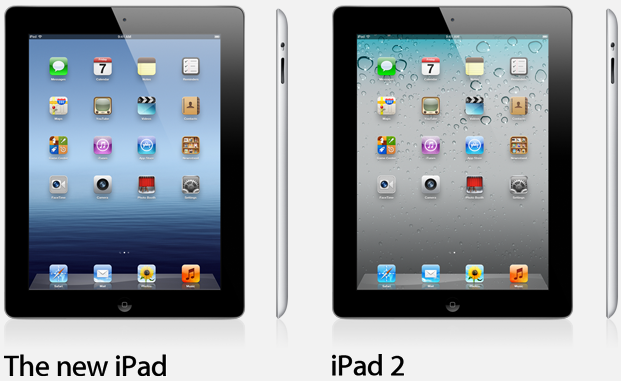 The new iPad was just announced, and while many of the improvements are minor, there are a couple features like the Retina display and quad-core graphics that make it stand out. While the processor is a higher-clocked version of the A5 chip in the iPad 2, there are now four graphics cores instead of two, theoretically able to push 133 million polygons per second (assuming the core is running at the standard 200Mhz). This is theoretically more than the Playstation 3 and the Xbox 360, but the fill rate is still limited by RAM speed.

We’re assuming the amount of system RAM has doubled to 1GB, but we have to wait until retail copies are released to verify. The 5MP autofocus camera is a nice, if not superfluous addition, since it’s always going to be awkward taking pictures with a tablet no matter how common the practice may be (and, alas, it is becoming more commonplace).

The crown jewels in the new iPad are the 4x resolution display, 2048×1536 as opposed to the previous model’s 1024×768, doubling the pixel density from 132ppi to 264. And Apple has also crammed in a 4G LTE chip with fallback HSPA+ capabilities up to 42Mbps (on TELUS and Bell only — Rogers will fall back to 21Mbps). Rogers, TELUS and Bell are confirmed as launch partners.

In terms of battery life, the two models seem identical, but the new iPad is sporting a new LTE-capable chipset (likely the Qualcomm MDM9615) which uses a 28nm manufacturing process, making it significantly more battery-efficient than previous LTE chips. But, as a result of the new camera, display and internals the new iPad is 60g heavier and just under 1mm thicker than the iPad 2.

Check out all the specs below. 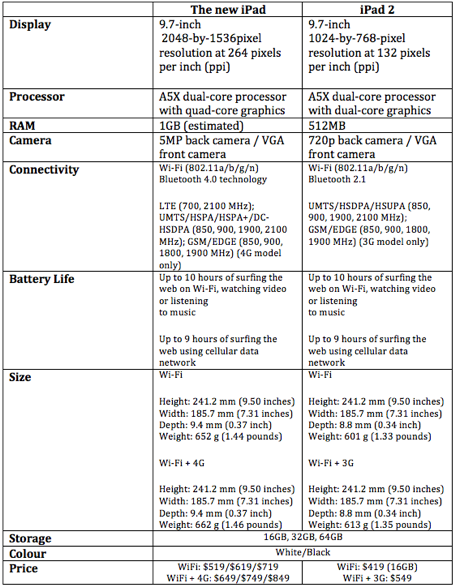 What do you think of the upgrade? Is it good enough for you to throw away/burn/sell your previous model(s) and pick up a new one? What are you disappointed with? Let us know in the comments!