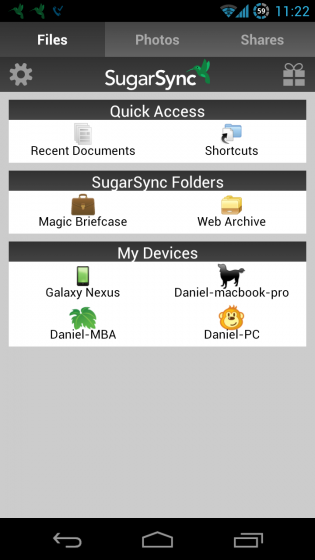 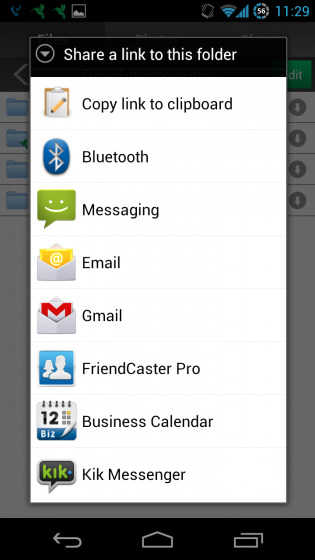 Sugarsync is my go-to syncing service, mainly because it is less expensive than Dropbox and does many of the same things. Instead of the “single folder” idea, Sugarsync allows you to manually sync any number of folders on your home PC or Mac to other computers on which the app is installed. The desktop interface has always been a little complicated but very powerful; you can sync certain folders to one PC while sharing your main documents folder with all of them, for example.

On mobile, the app has never been pretty but it works much the same as its desktop counterparts. You can sync entire folders or individual files which are stored on a My Sugarsync folder on your SD card. Previously, however, you were limited in how much you could manage your entire Sugarsync account on a mobile device, and with today’s Android update this has been rectified.

The app has seen a major overhaul in design, with support for Ice Cream Sandwich and a new icon to boot. It’s a little cleaner, though certainly not as nice as the newly-launched Dropbox 2.0. You can now copy, move and delete files, and more easily sync entire folders to your phone. Sugarsync has also added in the ability to share a private link to download entire folders or files, which is very convenient if you’ve got an entire collection of vacation photos or need to pass along some important documents.

Sugarsync is also pushing users to use its referral links to sign people up to the service. For every new member obtained through a referral link, both users get 500MB of permanent free space. This rises to 10GB for both members if the new user signs up for a paid account (free accounts max out at 5GB).

If you haven’t tried Sugarsync, or find Dropbox too expensive, check out the new Android app and let us know how you like it!