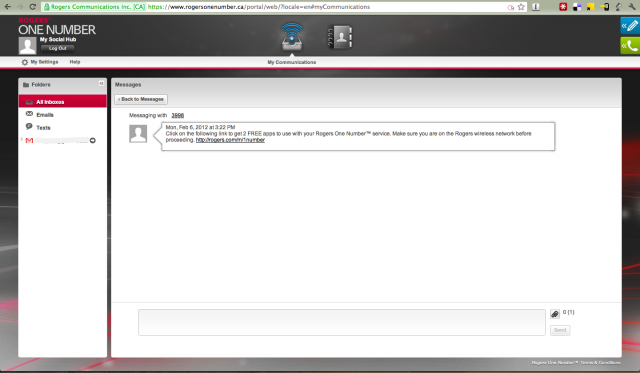 Rogers One Number is here, and it’s legitimately great. Not only is it useful if you are in front of a computer all day, but if you have multiple numbers (for example, a landline, work cell and personal cell) it can set them all to ring at the same time. It supports audio and video calls to anyone across Canada, for free, from a web browser, and its Contacts app integrates your existing smartphone contact list with your Rogers one and keeps them in sync.

First, let’s start with the concept: you have a Rogers cell phone. Rogers One Number, or RON, allows you to register that number with the service. Once that happens, you download an application to your computer (Windows or Mac), which sits in your task bar. Read on for the full details.
You then log into the www.rogersonenumber.com portal, at which time you can register a Gmail or Yahoo email address to fetch any emails you may wish to integrate. Once the registration process is complete, you will be able to receive phone calls and texts on your computer, even if your cell phone has no reception. You can also make free audio or video phone calls to any Canadian number, without accruing long distance charges.

The website uses your existing hardware, so any built-in microphone, webcam or speakers will work. Voice quality is good — I made quite a few since the launch, and the recipients couldn’t distinguish between my headset connected to the PC and my cell phone. Any phone calls I make come through as my cell phone number — no “0123456” Skype-like numbers here.

Calls, wherever they’re made, assume your local calling area. That means that even if you’re in Florida and sign into RON over WiFi, you can make calls anywhere in Canada for free. This also applies when you’re receiving a call, as it’s assumed you’re “local” even if you’re not. This alone is worth the price of admission. The only charges you can possibly be charged is for making international long-distance calls if you don’t have a plan to compensate. 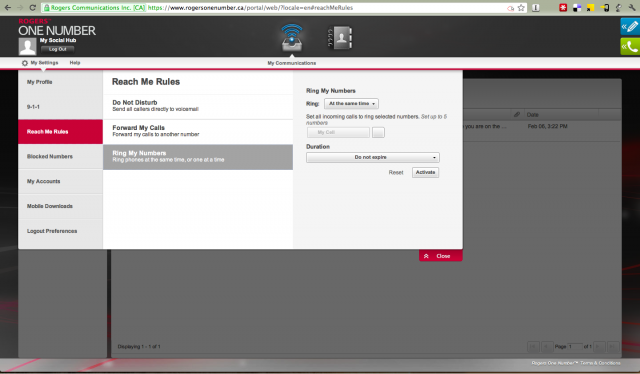 One of the biggest benefits to RON is the Google Voice-like feature called Reach Me Rules. This allows you to set Do Not Disturb hours, which will send all calls straight to voicemail between, say 11pm-7am; Forward My Calls allows you to redirect incoming calls to another number; and Ring My Numbers allows you to assign up to five different numbers to ring simultaneously when your main Rogers number receives an incoming call.

I tested this third feature out extensively, since I am often juggling multiple demo lines. It works like a charm, with a few caveats. I set two additional numbers to ring, one a Galaxy Nexus and the other a LG Optimus 7. Both phones, and the web interface, began ringing almost immediately after my iPhone (which is the Rogers line) but when picking up a call on the alternate lines, you are prompted to “press any key” to pick up the call. This means that, on most smartphones, you must manually bring up the dialler and press a number. This resulted in me missing the call a couple times, since I didn’t manage to hit a number in time. While I understand the need for this feature — you’re not usually going to pick up a phone call on an alternate smartphone — there should be an option to pick up the call without additional prompting. 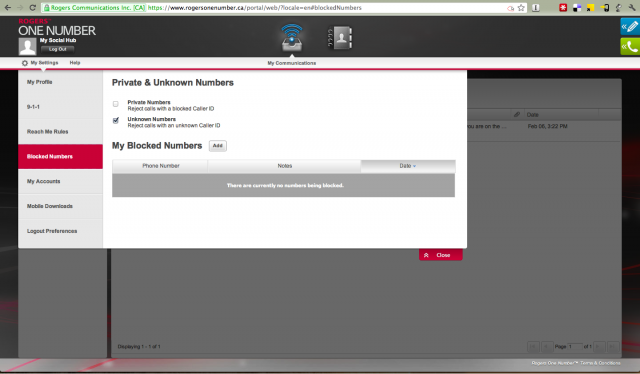 One more important feature is RON’s ability to block not only specific numbers but incoming calls with Private or Unknown names associated with them. The level of granularity here is something Rogers has been pushing since its Extreme Messaging feature debuted, but this takes it one step further, applying a blanket filter that can be accessed and managed from your phone or computer. 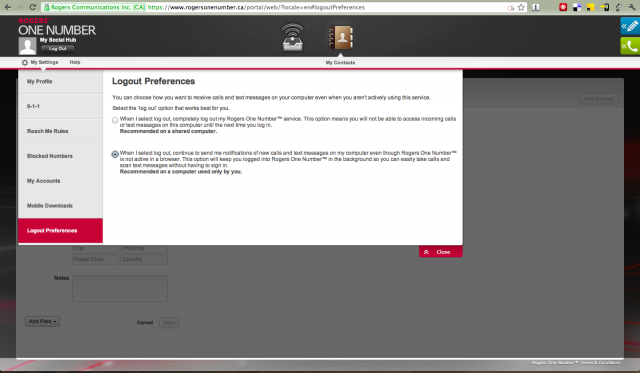 Conveniently, you don’t have to be logged into the web portal to still receive calls or texts on your PC. As long as you have the One Number App open and installed, it will continue notifying you of activity. You do have to be logged in to make calls, but when logged in the app gives you quick shortcuts to your dial pad, messages, Reach Me Rules and contacts.

And, as for 911 access, unlike Skype or another VoIP alternative, you can make emergency calls with the RON service. 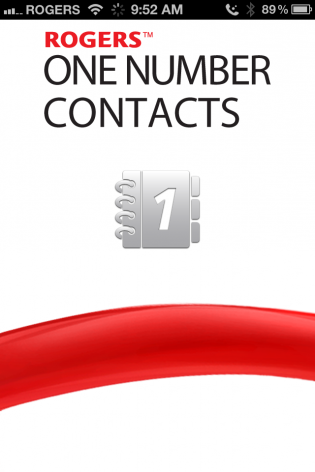 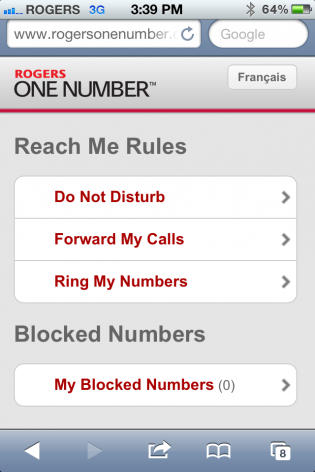 On the mobile side you can control your Reach Me Rules from RON’s mobile website. This way if you want your home phone to stop ringing when you leave the house, you can set it on the go.

Rogers has also released a mobile app entitled One Number Contacts in the iPhone App Store that allows you to sync your phone contacts to the web.

While this isn’t quite the Google Voice alternative Canadians wanted — you cannot use your existing Rogers number to call out on multiple handsets — but it’s a comprehensive, convenient and, best of all, free way to be more available to more people across more platforms.

Check out Rogers One Number and let us know what you think.

Rogers releases its One Number app for Android tablets