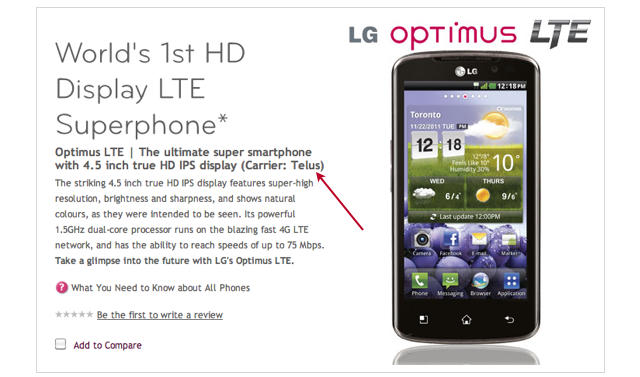 TELUS’ LTE plans are coming together very nicely. We already know they’ll go live in the next few weeks and will be launching a few powerful devices: the Samsung Galaxy Note and the Samsung Galaxy Tab 8.9 LTE. With the limited number of LTE devices available it’s expected to see some overlap, thus brings us to the LG Optimus LTE. Bell released this 4.5-inch “True HD” dream back in November and it also seems to be heading towards TELUS’ lineup.

The above image is straight from LG Canada’s site which clearly shows TELUS as one of carriers who’ll be selling it. There’s no official word from TELUS yet, and no indication of its availability. The TELUS model number is LG-P935, while Bell’s is LG-P930.

This Android device is currently running OS 2.3 Gingerbread, but will be upgraded to OS 4.0 Ice Cream Sandwich in Q2. In addition, LG recently announced that the Optimus LTE passed over the one million sales mark. Check out our full review here.

More here at LG
(Thanks Kirill!)