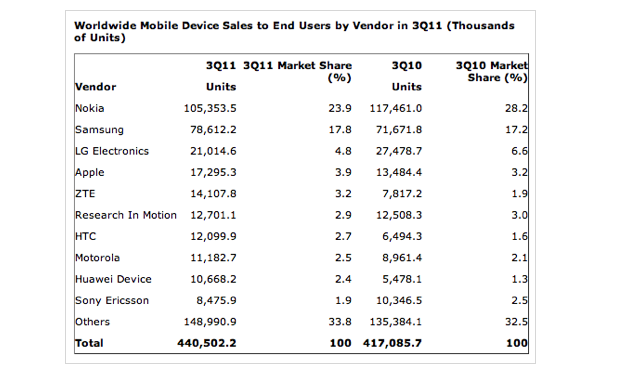 We know there are always analysts saying something about Android vs. iOS, but hear us out, because this is kind of significant: for the first time ever, Samsung shipped more smartphones than Nokia or Apple in the previous quarter, Q3 ’11. While Nokia still sold more phones — 105m to 78m — Samsung not only increased their sales numbers overall but sold 24 million smartphones to Apple’s 17 million.

Indeed, it appears that Samsung and its Galaxy powerhouse is stealing marketshare from pretty much everyone. Year over year Nokia’s sales were down some 6% while Samsung’s were up slightly, but smartphone sales tripled — those higher prices account for a large portion of their windfall.

According to Gartner, “Samsung became the No. 1 smartphone manufacturer worldwide as sales to end users tripled year over year to reach 24 million … Samsung was the No. 1 smartphone manufacturer for the first time, ahead of Nokia in Western Europe and Asia. Gartner attributes this to the strong performance of Samsung’s Galaxy smartphones, which now cover a broad range of prices, and a weaker competitive market. Analysts expect more competition in the fourth quarter of 2011, not least because sales of the iPhone 4S, 4 and 3GS will capture share from Android manufacturers.”

Some of the increase has been attributed to the lack of an iPhone in Q3, which is traditionally when Apple releases their upgraded product. The real test will be to see whether these gains can be sustained in Q4 ’11 as the iPhone 4S is distributed into multiple channels worldwide. “Gartner believes Apple will bounce back in the fourth quarter because of its strongest ever preorders for the iPhone 4S in the first weekend after its announcement.”

Perhaps the more significant news is that Android as a platform is up to 52.5% market share worldwide. Though this is attributable to low-cost solutions flooding the market, it also gives a good indication that OEMs and carriers both love the OS and its flexibility. While we’re not fans of low-end Android devices and tend to think the platform performs rather poorly on meagre hardware, being able to sell cheap “smartphones” to consumers across the world has brought Android into the forefront of marketshare and, to some extent, mindshare.

“Android benefited from more mass-market offerings, a weaker competitive environment and the lack of exciting new products on alternative operating systems such as Windows Phone 7 and RIM. Apple’s iOS market share suffered from delayed purchases as consumers waited for the new iPhone. Continued pressure is impacting RIM’s performance, and its smartphone share reached its lowest point so far in the U.S. market, where it dropped to 10 percent.”