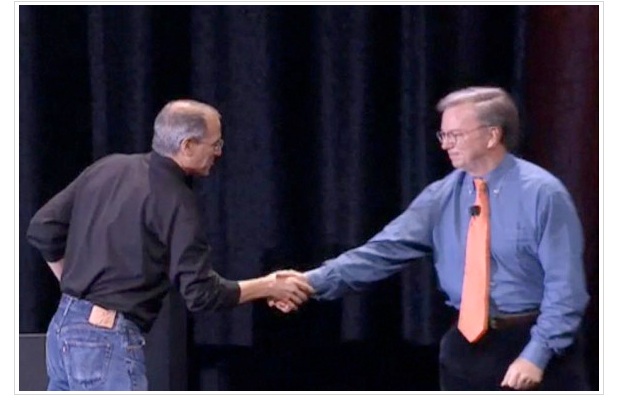 The upcoming authorized bio of Steve Jobs by Walter Isaacson will uncover much about the man. The book goes on sale on Monday but somehow the Associated Press purchased one ahead of time. They took the time and wrote some initial thoughts, which are quite revealing of how Jobs operated and his quest for perfection and simplicity. However, there was a side of Jobs that was downright nasty. According to the book the relationship with once Apple Board member Eric Schmidt, who was also CEO of Google, was immediately tarnished when Android was officially launched in 2010. Apparently Jobs “was livid” and accused Google “grand theft” for how the OS operated.

Jobs stated “I will spend my last dying breath if I need to, and I will spend every penny of Apple’s $40 billion in the bank, to right this wrong. I’m going to destroy Android, because it’s a stolen product. I’m willing to go thermonuclear war on this”. I would say that’s a bit more than being “livid”.

Majority of the manufacturers are helping with the growth of Android, Samsung, HTC, LG, Sony Ericsson and Motorola have all committed to releasing more devices with the Android OS. A recent Gartner study predicts that Google’s Android OS will capture 48.8% of the smartphone market share by 2015, Apple will have 17.2%.

Ninatic and NBA partner to create an AR basketball game