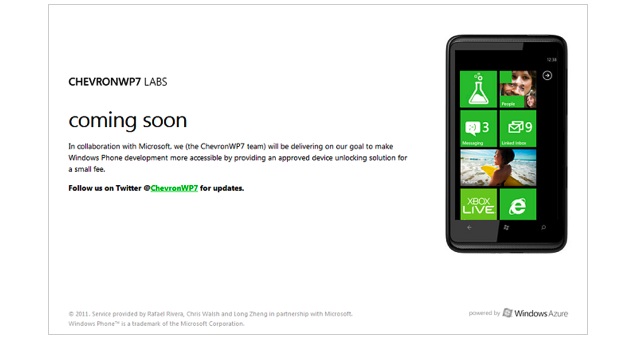 Late last year, a month or so after the launch of Windows Phone 7, a group called ChevronWP7 released an “unlocking” tool that allowed for sideloading of applications onto the nascent platform. At first this was merely useful for allowing devices without Marketplace support to load third-party apps they would have otherwise downloaded directly from Microsoft.

But as time went on individuals created homebrew applications that opened up functionality not originally shipped with the OS, such as a torch feature or screenshot capture. Microsoft quickly learned about the project and asked the creators to shut it down until they learned of the implications for software piracy that inevitably comes from jailbreaking any closed platform.

The project was shut down a short time later, and now the team has announced Chevron WP7 Labs, a collaborative project with the company to allow homebrew developers the ability, for a small fee, to jailbreak their phones.

The unknown variables right now are the most important: how much is the “small” fee; and will it allow for true root access the way the original did? Whatever the conclusion, one must  applaud the company for working with the hackers rather than fighting an ongoing losing battle against those who would want to find ways around Microsoft’s security measures.

This brings to mind recent overtures by HP and Samsung to supply homebrew application and ROM developers with free hardware. Manufacturers such as HTC, Motorola and Sony Ericsson have also opened up their Android devices to developers in recent months to curry favour with the homebrew community.