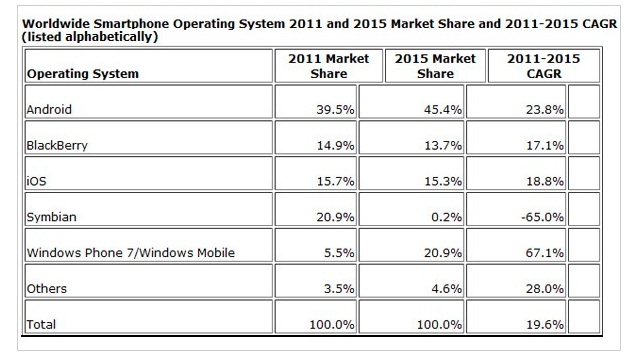 IDC has released their Worldwide Quarterly Mobile Phone Tracker report and believe this year manufacturers will ship over 450 million smartphones. The mobile OS that’s capturing the hearts of users worldwide is Android. IDC says by the end of this year Android will have attained 39.5% market share and officially become the number one mobile OS in the world. Second place is Nokia’s Symbian with 20.9%, Apple’s iOS follows with 15.7% market share and Canadian-pride RIM’s BlackBerry OS is next in 4th spot with 14.9% market share… trailing far behind is Microsoft’s Windows Phone 7 with only 5.5% market share.

However, IDC is projecting into the year 2015 where things are looking much different. Still leading the way in mobile OS is Android with 45.4% market share but skyrocketing to 2nd place is Windows Phone 7 OS with 20.9% market share. The recent partnership between Nokia and Microsoft to make Windows Phone their primary OS “will have significant implications for the smartphone market going forward” IDC stated.

Also, Apple and RIM are still battling it out for 3rd and 4th spot respectively.

Ramon Llamas, senior research analyst with IDC said “Up until the launch of Windows Phone 7 last year, Microsoft has steadily lost market share while other operating systems have brought forth new and appealing experiences. The new alliance brings together Nokia’s hardware capabilities and Windows Phone’s differentiated platform. We expect the first devices to launch in 2012. By 2015, IDC expects Windows Phone to be number 2 operating system worldwide behind Android.”