Upcoming Rogers Acer Liquid mt to be priced at $399.99 no-contract 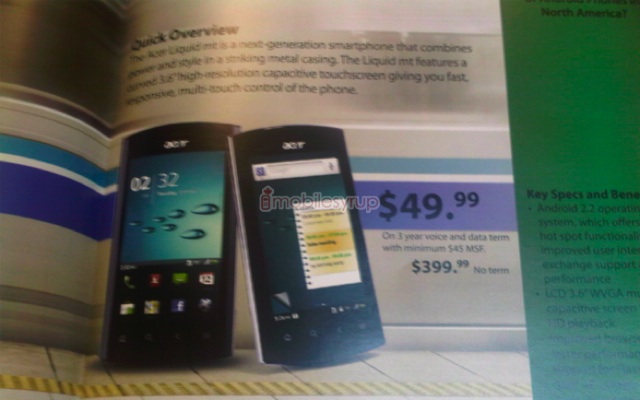 Back in November of last year Acer held a press conference announcing the Acer Liquid Metal was coming to Rogers. There was no word on when or what pricing… but we’ve got them for you now. This will be released as the “Liquid mt” and will be $399.99 no-contract or $49.99 on a 3-year term. In addition, this will be launched sometime in Q1 (probably in March).

The Acer Liquid mt runs Android OS 2.2 (Froyo), is finished in chrome with the back cover is stainless steel, has a 3.6-inch capacitive touchscreen display with a resolution of 480 x 800, 5 megapixel camera with auto-focus, LED flash and can record 720p HD video, 800 MHz Qualcomm 7230 processor, 3.5mm headset jack, WiFi, Bluetooth, holds up to 32GB, weighs in at 135 grams.