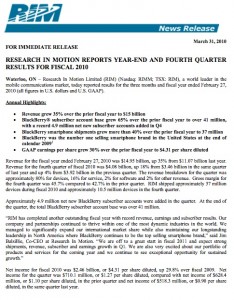 Waterloo-based Research In Motion (RIM) has announced their year end and Q4 results and quickly looking at the release it shows that revenue increased 35% over last year to a whopping $15 billion. In addition, RIM shipped 37 million BlackBerry devices and increased the subscriber base by 65% over from last year to over 41 million “with a record 4.9 million net new subscriber accounts added in Q4”.

Jim Balsillie, Co-CEO at Research In Motion said “RIM has completed another outstanding fiscal year with record revenue, earnings and subscriber results. Our company and partnerships continued to thrive within one of the most dynamic industries in the world. We managed to significantly expand our international market share while also maintaining our longstanding leadership in North America where BlackBerry continues to be the top selling smartphone brand. We are off to a great start in fiscal 2011 and expect strong shipments, revenue, subscriber and earnings growth in Q1. We are also very excited about our portfolio of products and services for the coming year and we continue to see exceptional opportunity for sustained growth.”

Now let’s see some new devices like the much talked about Slider and Pearl 9100/9105.  More here over at RIM