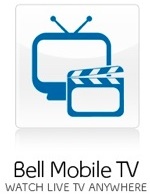 After the 2008 Beijing Summer Olympics, Nauby Jacob of Bell Mobility stated “It’s a new behaviour. You have to educate the market”. He was speaking about the adoption of Mobile TV and how only 1,000 subscribers signed up for the monthly $8 charge. During the Vancouver Winter Olympics Bell is a major sponsor and has taken the Mobile TV up a notch. They still have the monthly $8 subscription rate, plus have added a $10 watch all you want Olympic Mobile TV coverage. When it comes to statistics, Bell is stating that mobile viewership of live TV has increased 198% during the Games.

Bell also states that its just not about numbers, but to showcase what your smartphone  can actually do. Bell Mobility president Wade Oosterman said “It’s a nice confluence of events and technologies”. Scotia Capital analyst Jeff Fan says “It will be a litmus test of whether people will be paying for this type of content on their mobile”.