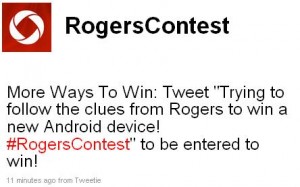 Rogers has decided to hold another contest and promote their Android powered HTC Dream. The contest is called “Rogers Get The Hint Twitter Contest” and is a scavenger hunt of sorts where there are differet hints such as “For hint number one, we’re giving you the start of the secret phrase. All you need to say is, “Can I pretty, pretty, pretty please…” or as hint number 2 says “To find the location, start by typing “Toronto” into Google Maps”.

They are giving away HTC Dream devices and you can win two ways. First is to follow the hints on Twitter clues to find out where the Rogers rep is located and what the secret phrase is (we’ve been told the Rep is in a different city every day) Second, enter your name RT @RogerContest and you could randomly be picked in a draw.