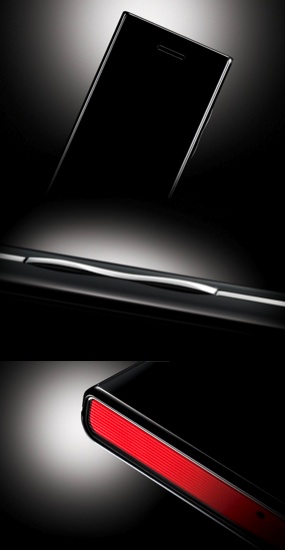 From the XML file we posted the specs show this could be one of the upcoming devices to be launched on TELUS’ HSDPA network. LG pegged an official launch date of sometime in August, there is no word if this will in fact be available in Canada.

But more importantly are the very odd specs that come with this: screen resolution of 345×800 pixels, “MaxMessageSize” of 614400 characters and also a “MaxImageResolution” of 2560 x 1920. There are no soft keys so it could be a touchscreen of some sorts. This will also come with a 5 megaixel camera and has video capabilities, stereo. Also, more details from Tweaters.net has stated “The touchscreen of the latest mobile phone in LG’s Black Label series has an aspect ratio of 21:9 and a resolution of 800×345 pixels.”

Skott Ahn, President and CEO of LG Electronics Mobile said “We’re returning to an all-time favorite to re-create the original experience. Over 21 million Chocolate handsets have been sold across 54 countries to date and we believe the next generation Chocolate will have a tremendous impact on the market, extending the growth that LG experienced during the first half of this year.”