I used the laptop on a full nine-hour work day that included a roughly 30-minute video meeting, constant image editing on Photoshop, typing on WordPress, with YouTube and Slack in the background, and the laptop still had juice left 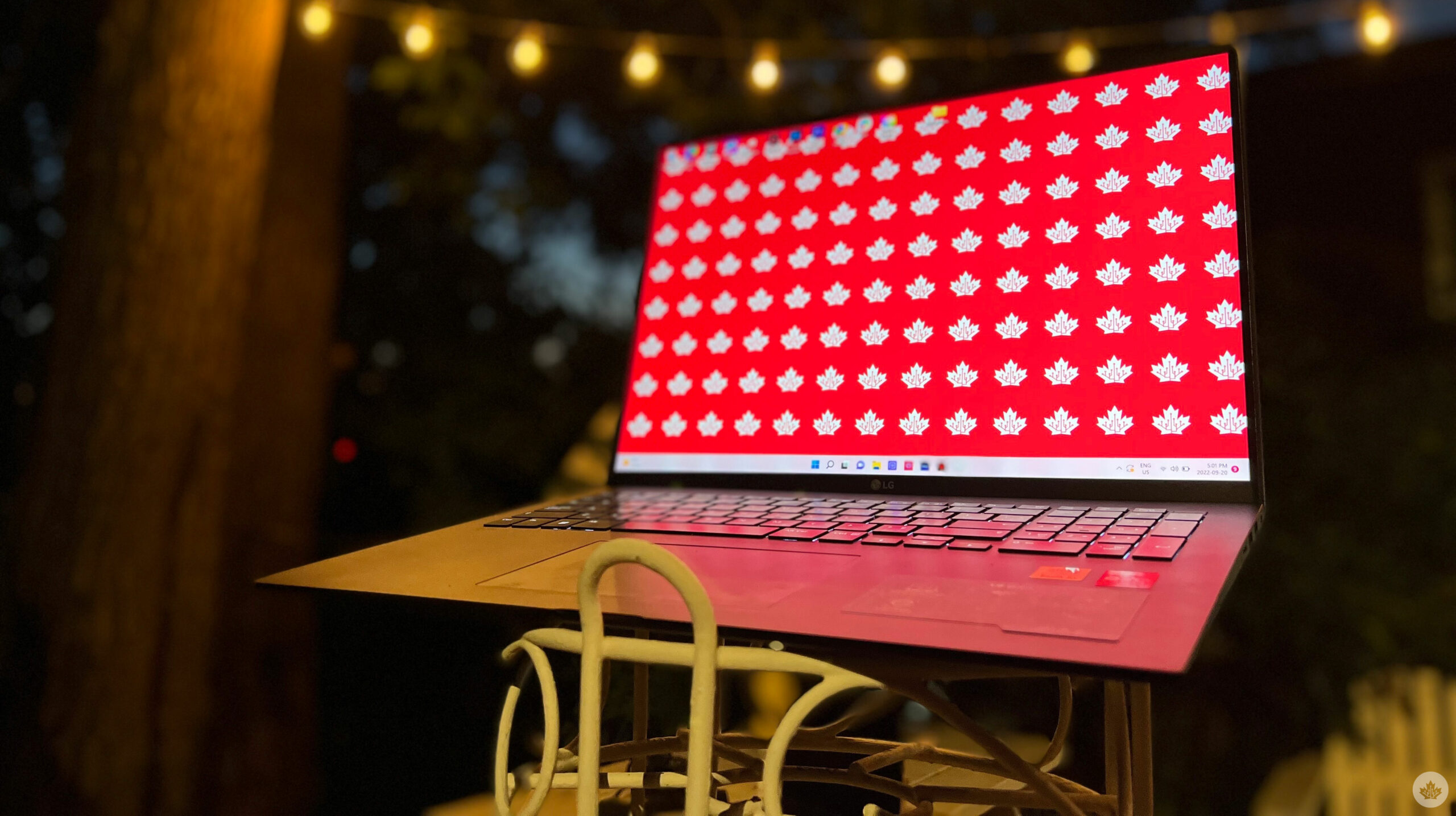 LG’s 2022 edition of the 17-inch Gram (179oq-k) is a true workhorse if you’re looking for a productivity-focused Windows laptop.

Where LG’s Gram 17 (2022) compromises is its build quality. Aesthetically, the matte-finished machine looks sleek and clean, though feels flimsy when held. The lack of a dedicated GPU also weighs the laptop down in the eyes of a gaming enthusiast, while those looking for a work/school laptop likely won’t mind the omission.

On the design front, the 2022 LG Gram is identical to its 2021-released predecessor, with the same ‘Obsidian Black’ colourway and a matte black finish to the entire body, with skinny bezels that are thinner than its predecessor. At first glance, the only noticeable difference between the two iterations is in the webcam bulge, likely due to the addition of infrared for face unlock, dual microphones, and an overall better 1920 x 1080 webcam resolution.

The laptop looks clean and professional, with an aesthetic that seems like it was thoroughly thought through. The centre-aligned trackpad is clicky but without the added noise. It’s super responsive and features gesture support, while the keyboard is backlit and includes a numpad and function keys that are easy to identify in a dark room or outdoors at night. 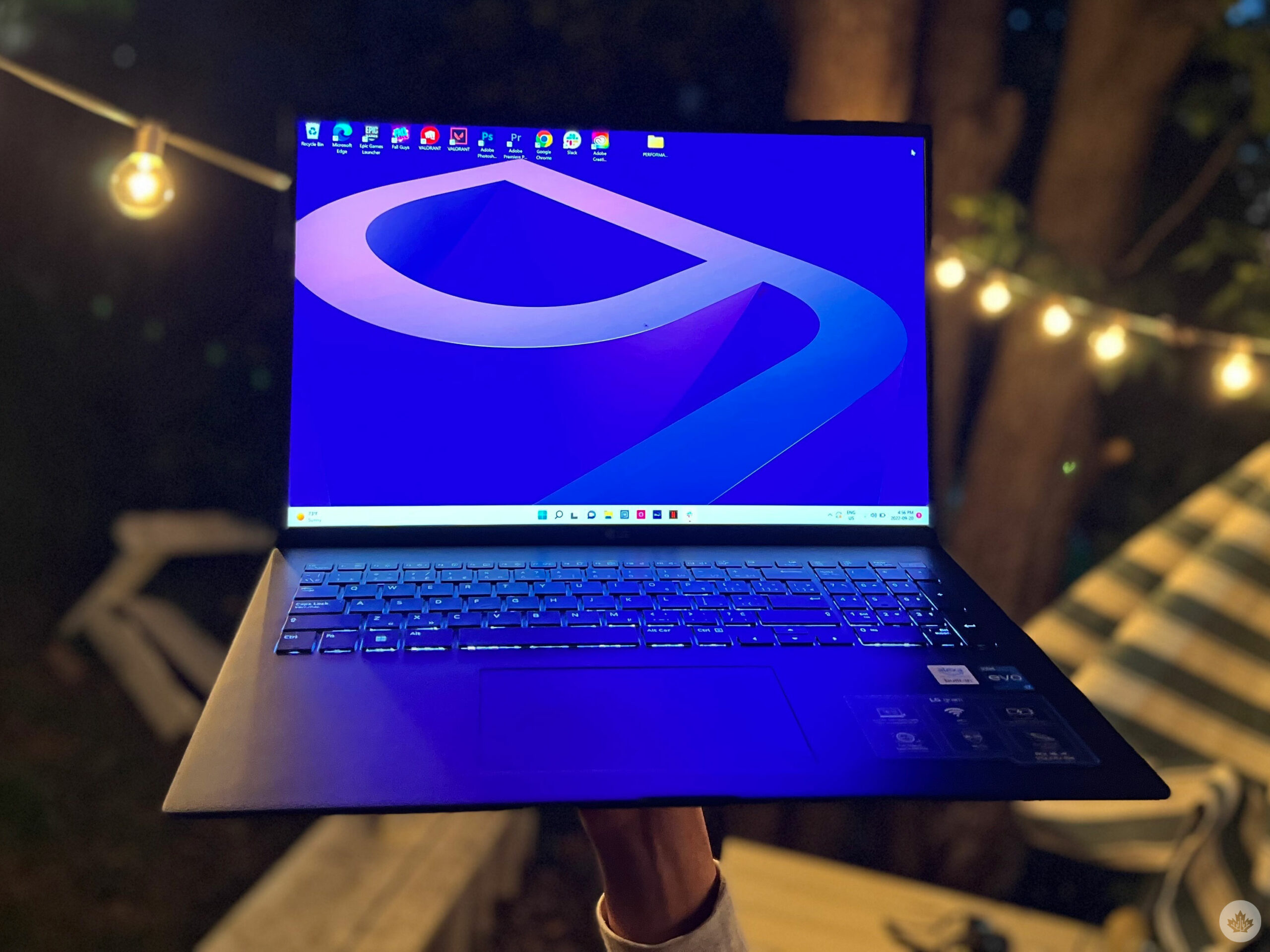 The keys, despite being island-style/chiclet-style, are still easy to press, with a familiar layout.

The 2560 x 1600 pixel resolution display, although only 60Hz (without variable refresh rate), is a visual delight, with vibrant colour reproduction, crisp detail and 350nits peak brightness. It features a non-reflective coating to disperse glare, so streaming movies, scrolling through Twitter, attending virtual meetings, or editing images on Photoshop, all look punchy on the Gram’s 17-inch 16:10 aspect ratio display, be it indoors or outdoors. The laptop can easily double as an entertainment or casual use machine and your daily school or work driver.

One off-putting aspect of the 2022 Gram, regardless of how professionally built it looks, is that I feel like I could snap it in half without trying. The thin bezels and top lid look aesthetically pleasing but feel flimsy when held, just like the 2021 version of the laptop. Similarly, pressing the chassis around the touch bar makes the laptop bulge in, making it prone to damage over time, especially for clumsy users like me.

Considering that the productivity laptop is to be carried around every day, be it to school or work, I feel it needs to be a tad bit sturdier, but I guess a flimsy frame is a price you pay for an ultra-light 1.350kg / 2.98lbs 17-inch that you can carry around with one hand.

On average, the laptop boots up in 5-7 seconds, and performs everyday tasks like streaming, video conferencing, photo editing, holding several Google Chrome tabs and more without a hiccup. It’s responsive and snappy, with applications like Photoshop starting up without delay. The laptop can handle more strenuous tasks like video editing or 3D rendering easily, without its fans sounding like a jet engine, albeit only while plugged in. When using Premiere Pro on the Gram without it being plugged in, I noticed repeated stuttering and freezing, only for it to go away when plugged into a power supply.

And while the laptop is suitable for multitasking and can be used for work and entertainment, one area where it falls short is gaming. The Gram doesn’t have a dedicated gaming graphics card and instead, uses an integrated Intel Iris Xe GPU, so if you’re someone looking to pick up a laptop that also doubles as a reliable gaming machine, you’ll likely want to pass on the 17-inch Gram. 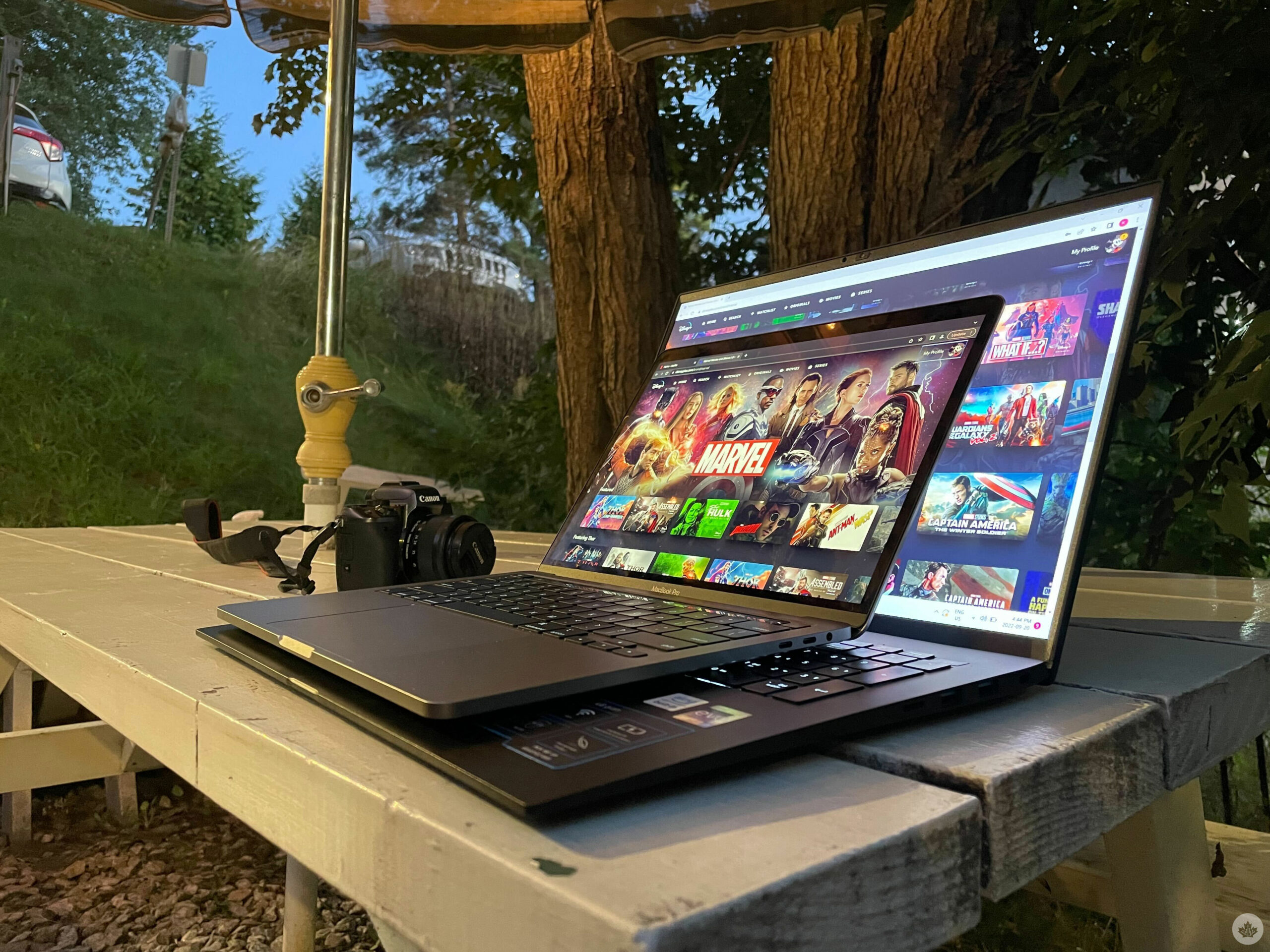 On the other hand, if you’re not a serious gamer, and are fine with playing titles on low settings with 30-50 frames per second on a 60Hz display, like a MacBook owner, or play less intensive titles, like Fall Guys, which by the way, works perfectly on the Gram when plugged in, the laptop can be quite accommodating.

Running all day, every day

LG’s 2022 17-inch Gram sports an 80 Wh Li-Ion battery that can allow you to forget the charger at home, and not have to worry about your laptop dying.

With regular work use, the laptop takes roughly 15 hours to drain out fully, while more intensive tasks cause the battery to give up in about ten hours, which is more than impressive, considering the laptop’s 17-inch QuadHD display and high brightness.

“Students and those looking to pick up the device for office work should note that the laptop should last you the full day without having to plug it in.” 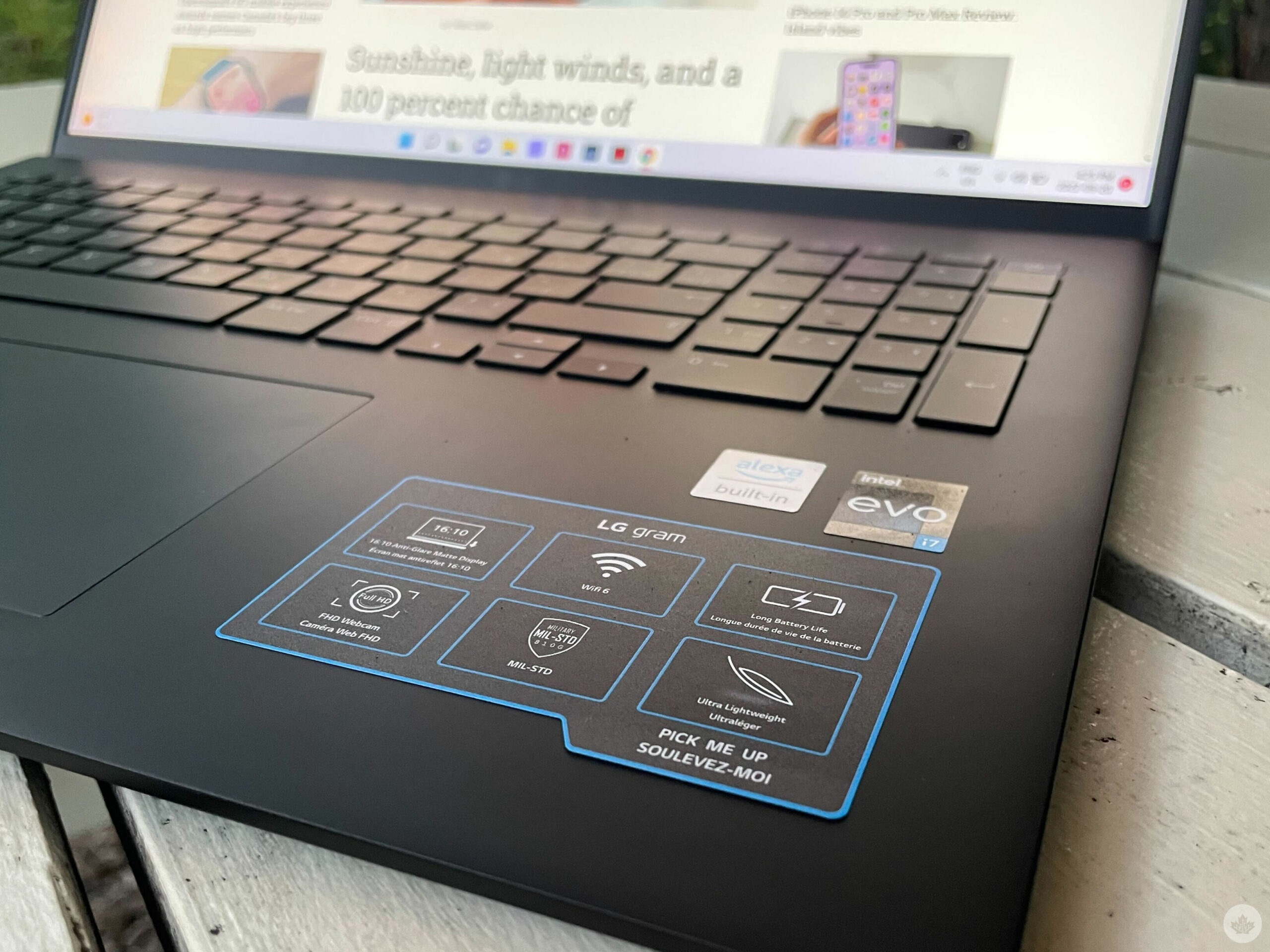 I used the laptop on a full nine-hour work day that included a roughly 30-minute video meeting, constant image editing on Photoshop, typing on WordPress, with YouTube and Slack in the background, and the laptop still had juice left

Gram 17 offers Wi-Fi 6E, and while I do not have a 6E modem yet, it’s good to know that it is future-proof in a way, and that when I decide to upgrade my modem, the laptop would be able to take advantage of a less congested 6GHz radio band. Bluetooth 5.1 is also a plus, for fast and reliable peripheral and audio devices. 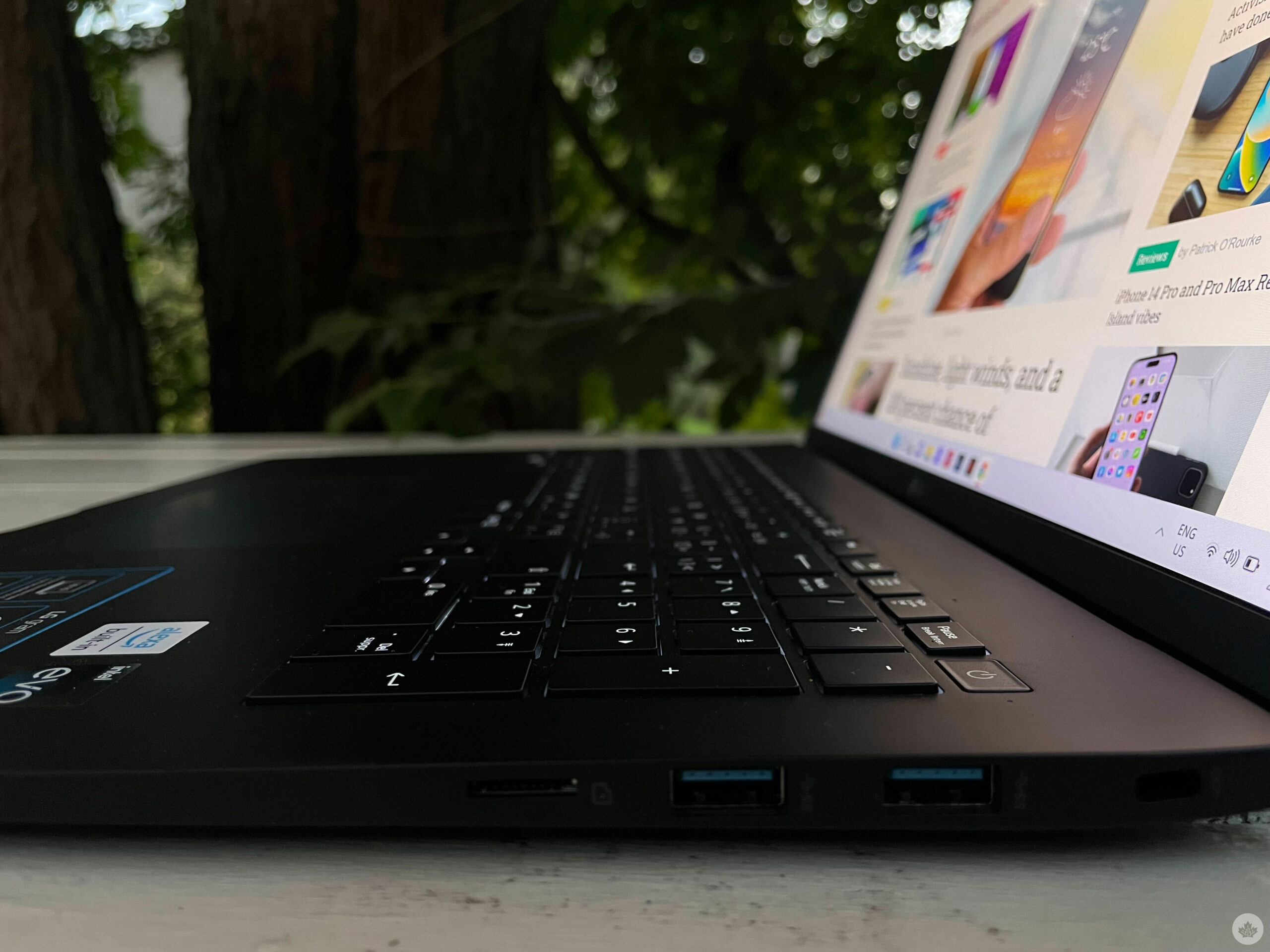 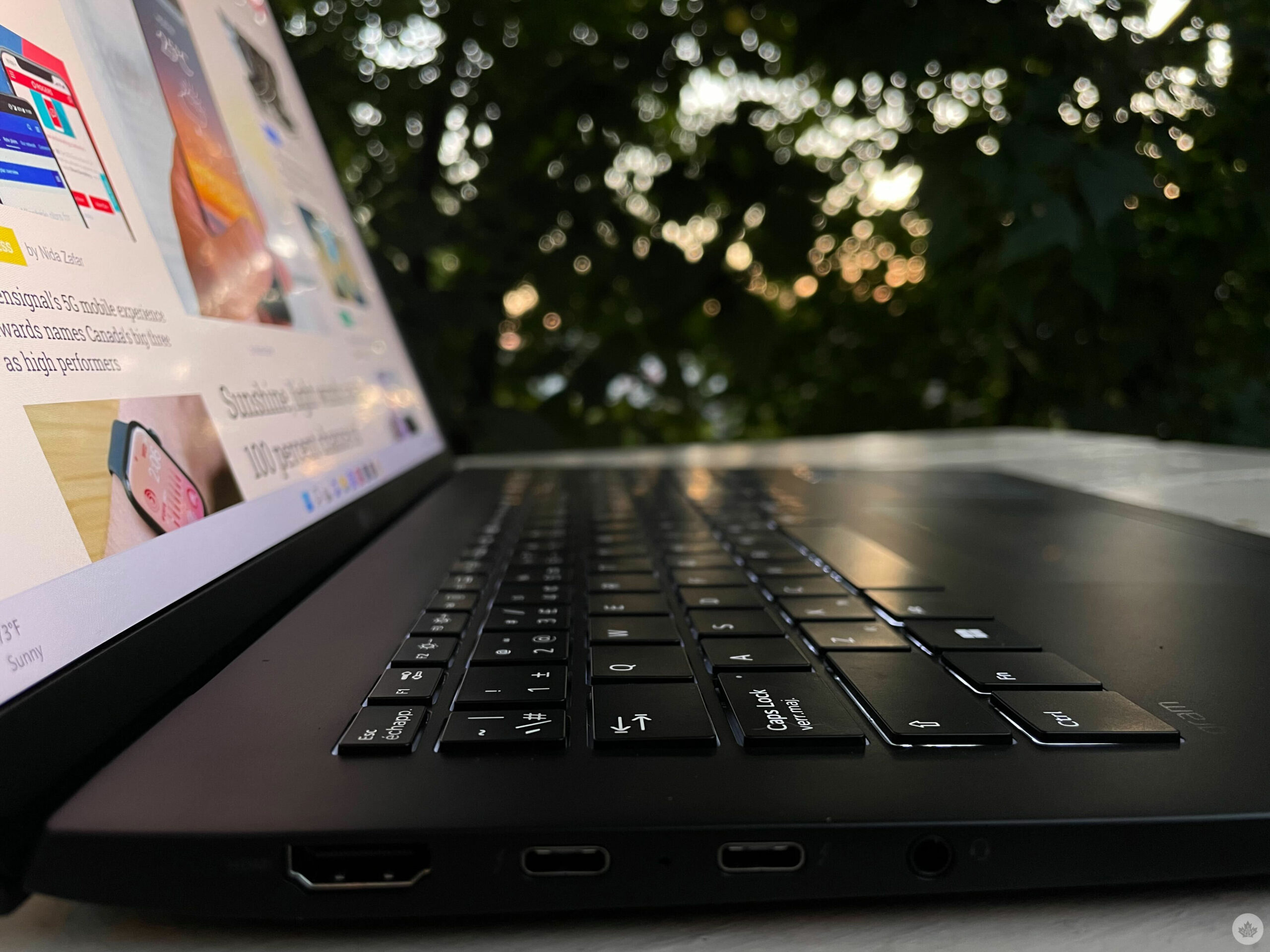 The laptop doesn’t compromise on ports either. On the left sits an HDMI out port, two Thunderbolt 4 USB-C ports and an audio jack, while on the right sits a Kensington lock, two USB 3 ports and a MicroSD card reader, a great addition for those looking to use the laptop to edit images off their DSLRs.

The Gram is the first laptop I’ve used that has traded out Cortana in favour of Amazon’s Alexa, and it’s safe to say I don’t miss the former. However, that doesn’t mean the Alexa experience is smooth.

I regularly use the Echo Show 15, and it is my daily driver when it comes to background music, reminders, shopping lists, and smart home controls, though the experience doesn’t translate 1:1 on the laptops. For starters, by default, Alexa on the Gram would only listen to you if you have the Alexa app open in the background, which takes up roughly nine percent of the total memory on board. There is an option to wake Alexa when the app is off, but it takes up about 10 seconds, which negates the convenience of a smart voice assistant. On the other hand, having my laptop connected to the same Amazon account as my Echo Show means I can control devices in my house from a different room, and hop back in to my to-lists and calendar without having go near my Echo.

It comes with McAfee Live Scan pre-installed, alongside some LG bloatware, including LG Smart Assistant, which allows you to enable/disable the laptop’s webcam, microphone, and touchpad.

It also features a cooling mode where you can set the laptop’s fan speed, alongside settings for display colour temperature, and AI noise cancelling. Notably, power settings and keyboard settings are also available in the app, making it a one-stop app for several of your laptop customization needs. 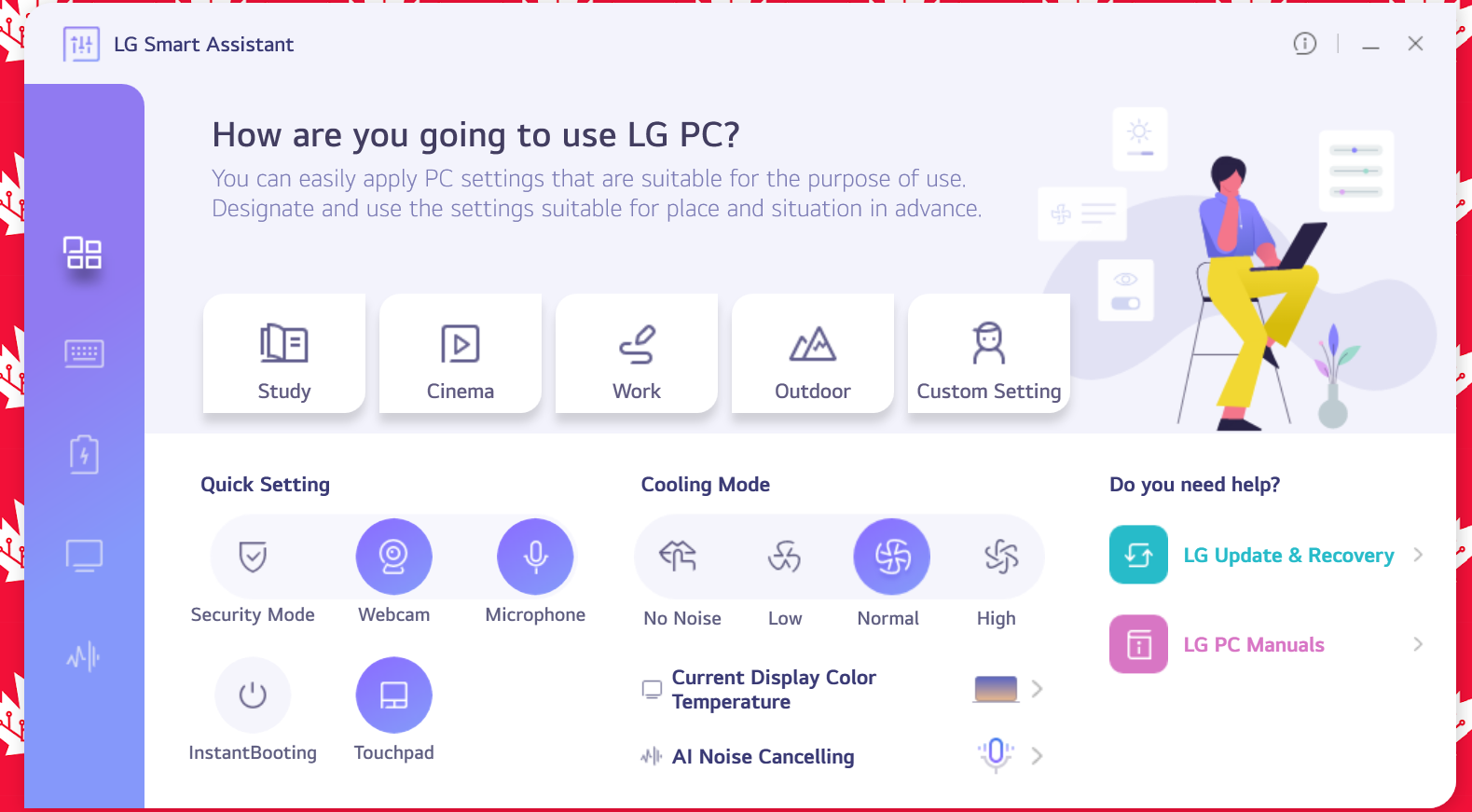 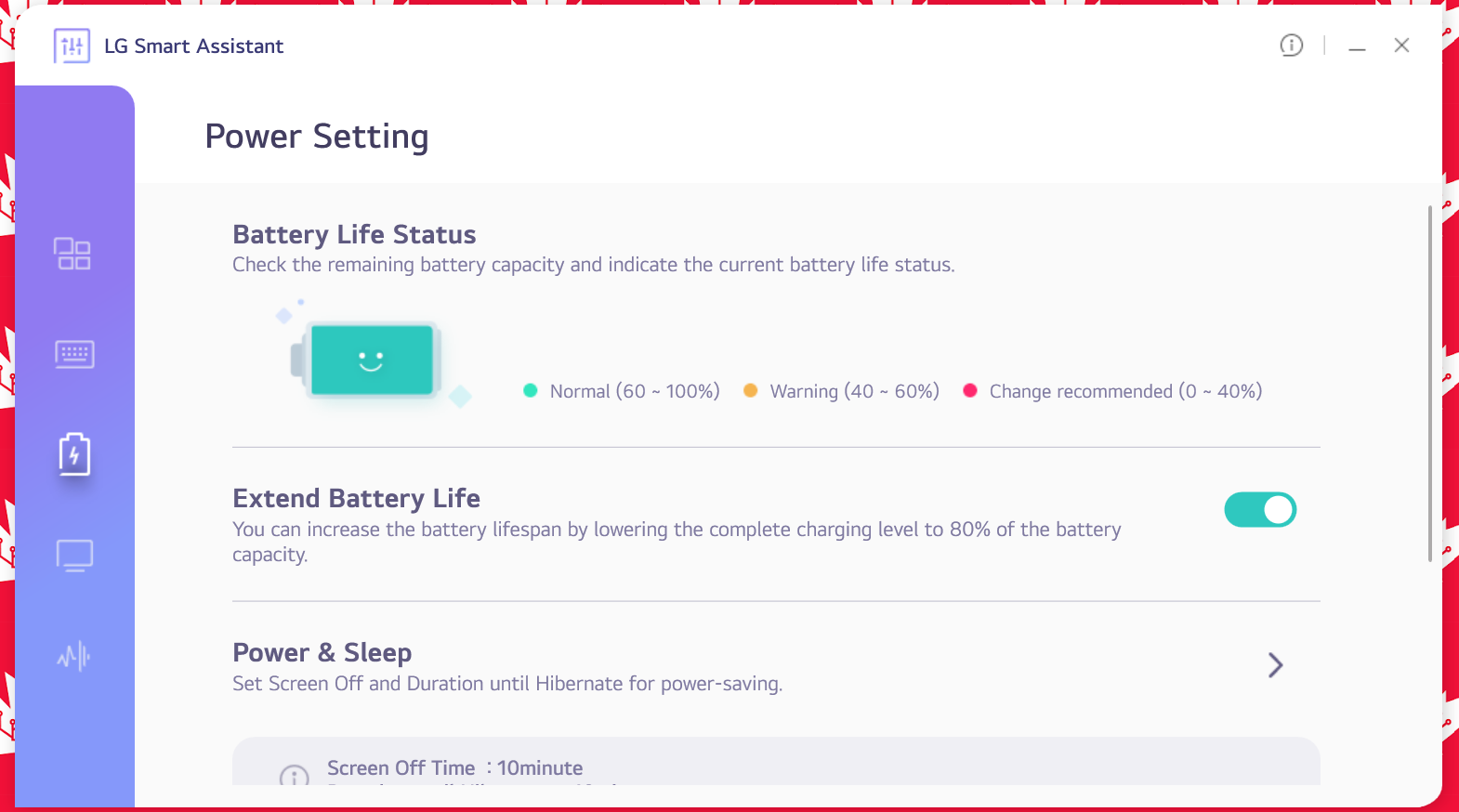 Other pre-installed apps include a bunch of software from a company called Cyberlink. For example, ‘Audio Director,’ is like Adobe Audition, ‘Photo Director,’ does what Photoshop does, while ‘Color Director’ is a mix of Photoshop and Illustrator. The pre-installed apps don’t necessarily take up a lot of space, but I feel they don’t offer anything that I can’t find on more reliable apps that I’m already familiar with, like Adobe’s suite of products. Uninstall away.

On the audio side of things, the LG Gram 17 doesn’t offer anything special. It features two bottom-placed 1.5W stereo speakers that get fairly loud, up to 88 decibels, but lack any significant bass. The only thing going well for the speakers is that the audio is clear, with easily decipherable vocals, even when the volume is cranked all the way up, while all the other audio aspects sound lifeless. They’re fine if you want something playing in the background while working or studying, but if you want a rich audio experience, you’ll have to plug your headphones in.

Large screen and light weight is a solid combo

LG's 2022 Gram 17 is a powerhouse when it comes to productivity. Its all-day battery life means you can afford to forget the charger at home and not have second thoughts for the rest of the day, while its large 2560x1600 display makes anything you're doing on it a visual delight.

It is super light, coming in at 1.350kg / 2.98lbs, making it a portable machine that you can carry around with one hand with ease, though the lightweight comes with trade-offs. The laptop feels flimsy, and I'm constantly under the impression that slight pressure can break the laptop, and that's not something you want if you're spending $1,900 on a work machine.

It features several ports, including a MicroSD card reader, which makes it a desirable laptop for those looking to transfer files on and off the device, though struggles when it comes to handling intensive games due to the lack of a dedicated GPU.

I would recommend the laptop to someone who's always on the move, like a university student, who needs a portable laptop with a bunch of screen-time throughout the day, while those looking for a rugged machine that can double as a gaming gadget need to look elsewhere.

"LG's 2022 Gram 17 is a powerhouse when it comes to productivity. Its all-day battery life means you can afford to forget the charger at home and not have second thoughts for the rest of the day."