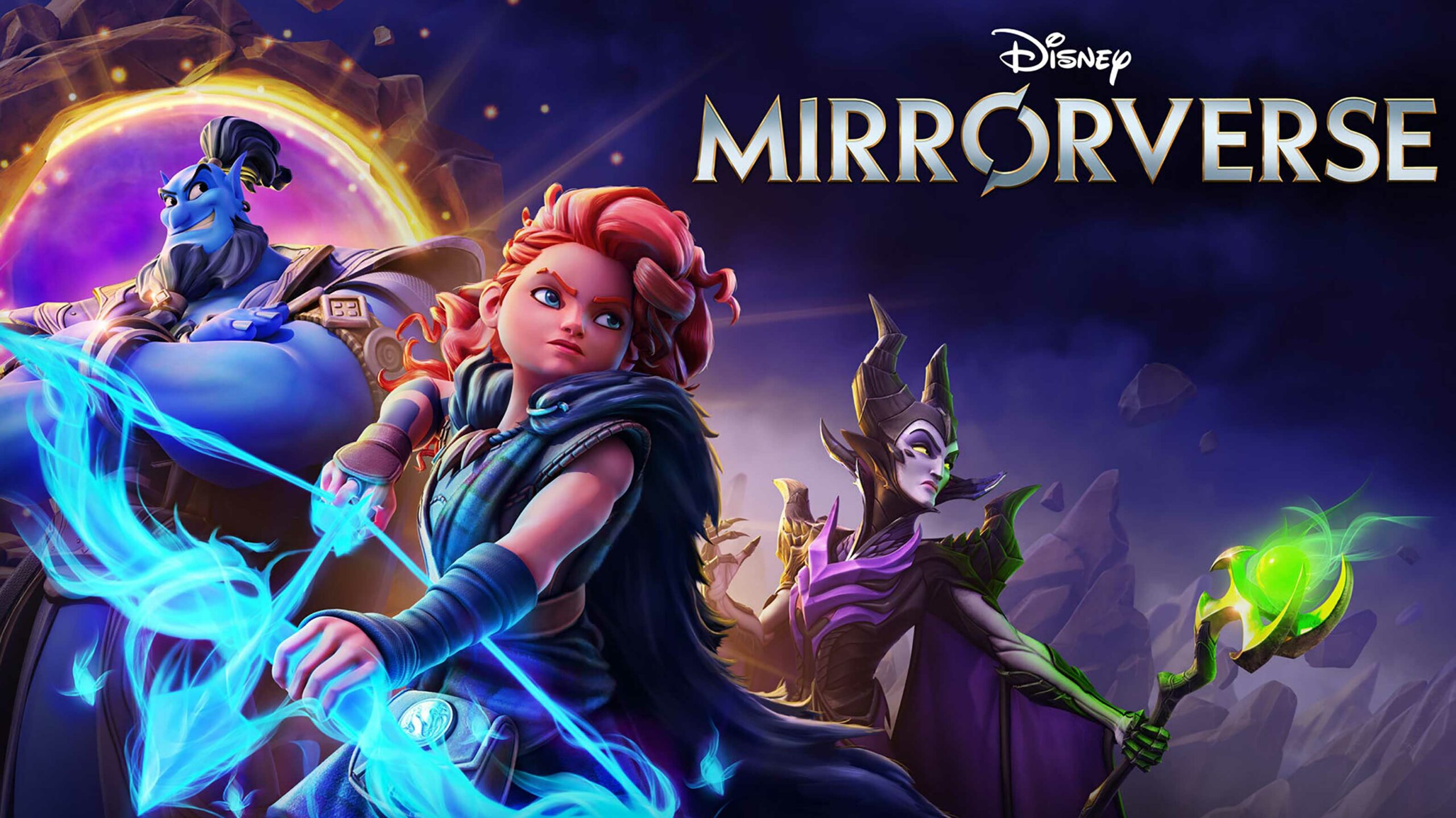 “Multiverses” are all the rage right now.

Whether it’s the plethora of Spider-Man heroes and villains in last year’s Spider-Man: No Way Home, the apparent franchise crossovers in May’s Doctor Strange sequel or the pair of Batmen in next year’s The Flash, audiences are clearly loving possibilities of multiverse storytelling.

That’s what makes Disney Mirrorverse so interesting. Developed by Vancouver-based Kabam, the team behind the massively popular Marvel Contest of Champions, Disney Mirrorverse is a mobile action-RPG that sees Mickey Mouse assemble a slew of iconic Disney and Pixar heroes and villains to protect the multiverse from the dark forces known as The Fractured.

While that premise would be undoubtedly appealing in and of itself to many fans, the key twist here is that each character gets their own unique spin.

“We’ve been taking a new approach to creating games at Disney — really focusing on telling original stories, and evolving our iconic characters and worlds to form unique experiences that only games can offer,” said Luigi Priore, VP of games at Disney and Pixar, during a media briefing. “So when we started working together with Kabam, we began by building an entirely new universe, one based on the Disney and Pixar stories that we know and love, but different in new and unexpected ways — one that really allows us to explore how these well-known Disney and Pixar characters are evolved in that new universe with a wide range of unique stories we could tell.”

The novelty of this approach becomes apparent quite quickly upon watching the reveal trailer. Recognizable Disney and Pixar characters soon appear, but something’s… different. Sulley from Monster’s, Inc. is wearing shiny armour and a matching shield, Beauty and the Beast‘s Belle is sporting a full sorceress garb and staff, and Brave‘s Merida is wielding Scottish warrior clothing to go with a magical bow. If that weren’t enough, Kabam says it took special care to incorporate classic elements of each Disney and Pixar property into their respective characters. With Sulley, that means his shield is, quite literally, one of the “scare” doors from Monster’s, Inc., while Belle’s staff is actually powered by the enchanted rose from Beauty and the Beast. 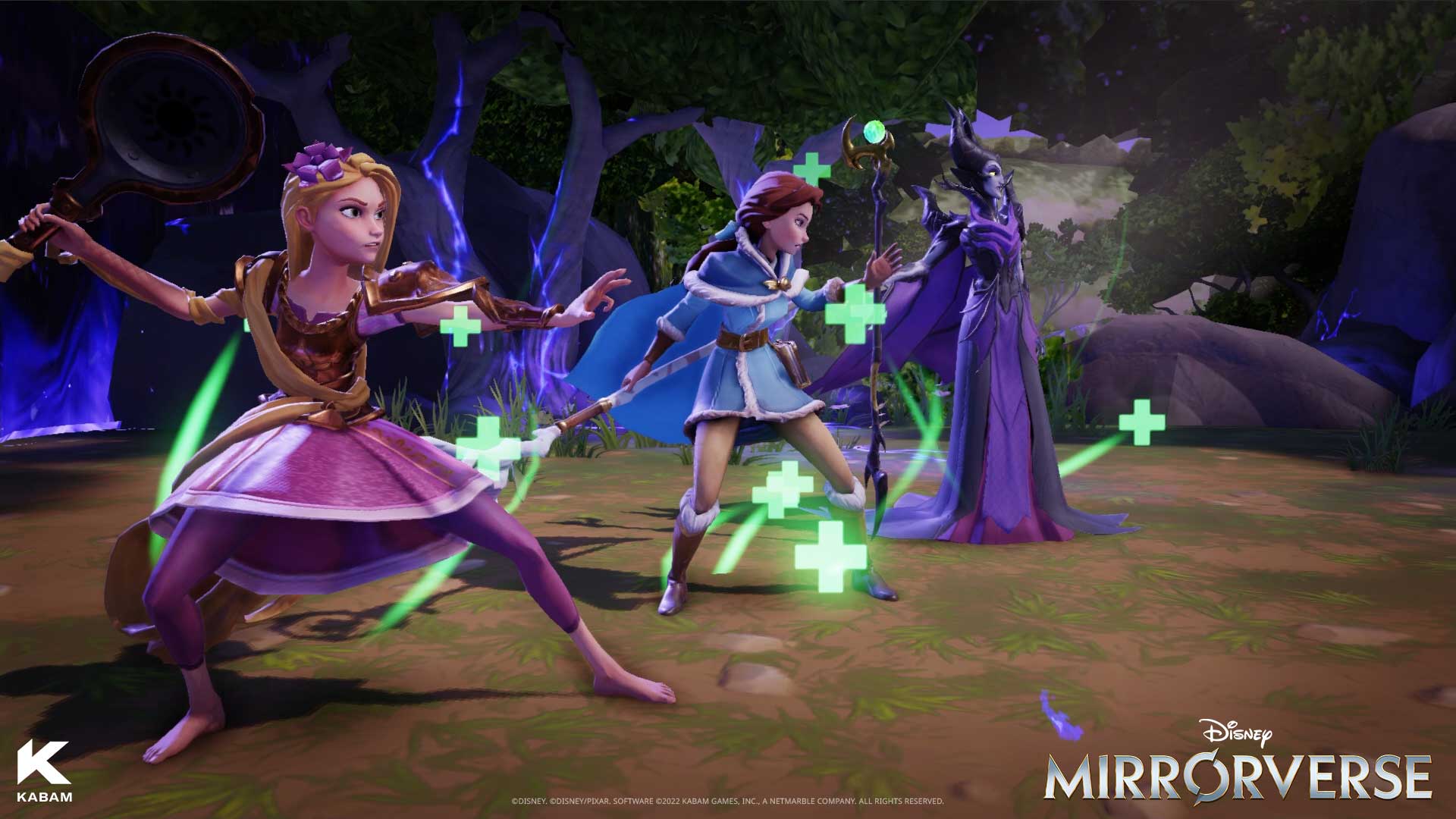 All told, it was quite fun to see these otherwise innocent and friendly characters get these decidedly badass makeovers. But how the characters look is only half of the equation. As Kabam character designer Dennis Lever tells it, the team set out to answer “two big questions” when designing the gameplay for Mirroverse.

“First, what kind of gameplay will best satisfy players who have these strong emotional connections to these iconic characters? And second, how can we make sure that our game is both easy to play and challenging to master so that Disney fans of all ages and all walks of life can have fun in our new worlds?” he said.

The answer, per Lever, was “a cinematic style of action gameplay with intuitive controls” through which you have “full control” over the characters. While I didn’t get to go hands-on with Mirrorverse to experience this myself, the briefing did include a brief gameplay demo as played by Kinda Funny‘s Greg Miller and Tim Gettys. 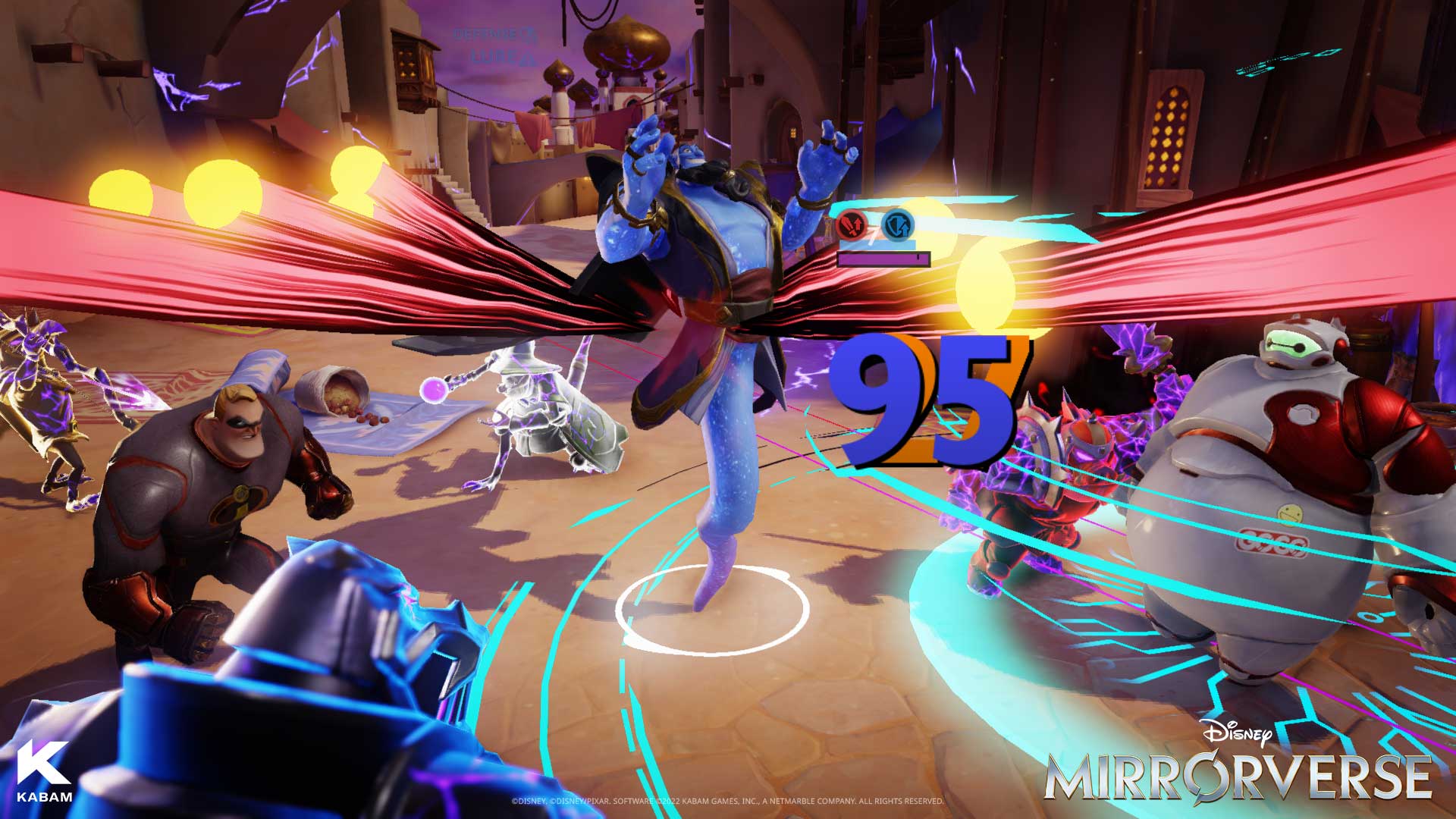 Based on what I saw, Mirrorverse‘s combat seemed reminiscent of the fun Marvel Ultimate Alliance games, albeit in a solid mobile-friendly form. As Lever said, you’re able to fully move around your characters and tap the ground to avoid attacks, which should make it feel less automated than some other mobile titles. (An “auto-play” option will be available for those who want it, though.)

From there, each character has their own unique abilities to effectively give them “classes,” like Belle having healing and buffing spells, Merida using ranged arrows and Sulley throwing heavy melee attacks. Other characters range from Sleeping Beauty‘s Maleficent (switches between witch and dragon forms for lightning and fire attacks) and Toy Story‘s Buzz Lightyear (can fly and shoot lasers) to more unorthodox picks like Zootopia‘s Judy Hopps (quick melee attacks) to The Jungle Book‘s Baloo (a pilot who turns parts from ships into weapons). While I’d still like to go hands-on at some point, the variety of characters looks quite impressive so far.

On top of that, Kabam is also promising a breadth of content, including many Disney and Pixar worlds to visit. 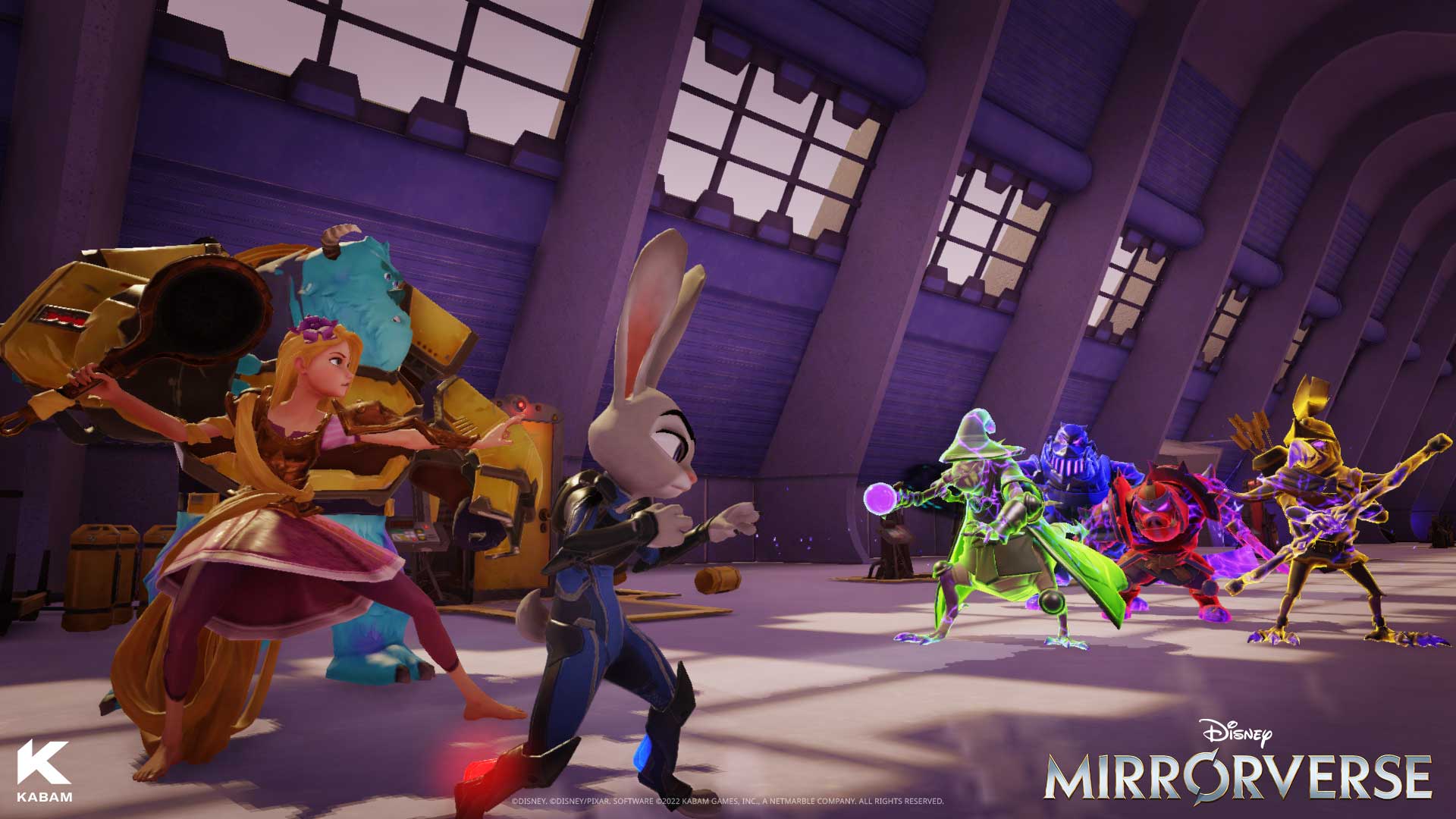 “Since the Mirrorverse worlds were created by a collision of light and dark, it was important for us to pull that same dramatic tension through intimate design of the game world,” explains Johnson Truong, lead artist at Disney and Pixar Games. “We created a visual language to continue to tell the story of light solar magic, clashing with dark Fractured magic that is always threatening to seep in. And their visual story plays out across several Mirrorverse worlds, like Agrabah, the Monsters, Inc. Scare Floor, Port Royal from Pirates of the Caribbean and the Corona Forest from Tangled.”

Other Mirrorverse content will include limited-time quests for rewards, and monthly updates to add new characters, events and more. My two biggest remaining questions, though, surround the story and monetization. With respect to the former, I didn’t get a clear look at the unique character backstories or potential banter they might share, which would certainly be some highlights of a multiverse plot like this. More importantly, though, it remains to be seen how extensive the inevitable in-app purchases will be. Hopefully, they’re not egregious like some other mobile games.

In any event, I’m looking forward to seeing more from Disney Mirrorverse as we lead up to its worldwide release on Android and iOS on June 23rd, 2022. Pre-registration is available here.