This is a machine designed for business professionals.

The first thing you’ll notice about the Summit is its unique aesthetic. To describe it in a single word: elegant.

The matte-black aluminum body with rose gold accents is clean. It’s both subtle and eye-catching in equal measure. It feels solid to the touch, but isn’t too heavy to take on the go. Its slim profile makes it only slightly larger than a tablet, and that’s where the name Flip comes into play.

The Summit E13 is designed to act as a fully-featured laptop and a touch screen tablet. The display can be flipped 360 degrees to lay flat against the back of the laptop, or stand up as a vertical screen. This allows it to be used as a workstation, presentation tool, or e-reader.

Paired with MSI’s pen, the Summit can be used to create detailed pieces of art, or jot down notes during meetings with ease.

But it’s the user experience that stands out for the Summit. MSI has done a great job of thinking about the needs of their users and building solutions directly into the external and internal design.

Secure for work and life

Let’s start with the security features.

If you use a webcam, there’s a legitimate concern about whether people can access it without your knowledge. To address this, MSI has built both a software and hardware solution to stop people from accessing your data.

You can turn off the camera on a system level using F6, but if that’s not enough, you can toggle the physical switch on the right side of the laptop to turn off the power to the camera, eliminating any risk.

When it comes to using the laptop for calls, the 720p IR camera produces clean images even in dark light thanks to the noise reduction software. I tried this out by streaming in the evening with only soft LED lighting, the laptop was able to create images that are better than those on my personal laptop. The image is bright, sharp, and has significantly less noise in the shadows than most webcams I’ve used.

Even more impressive is the new noise-cancellation feature for audio. Instead of traditional acoustic wave noise reduction, the Summit uses AI to reduce background noise. The issue with traditional noise cancellation is that it’s limited to very particular bands of sound. The AI algorithm is able to compensate for more variances in background noise, creating a cleaner sound.

When running my dishwasher, washing machine, and dryer in the background, it was able to keep my voice clear on calls with only the occasional bump picked up from the dryer. It’s not perfect, but it’s a significant improvement. 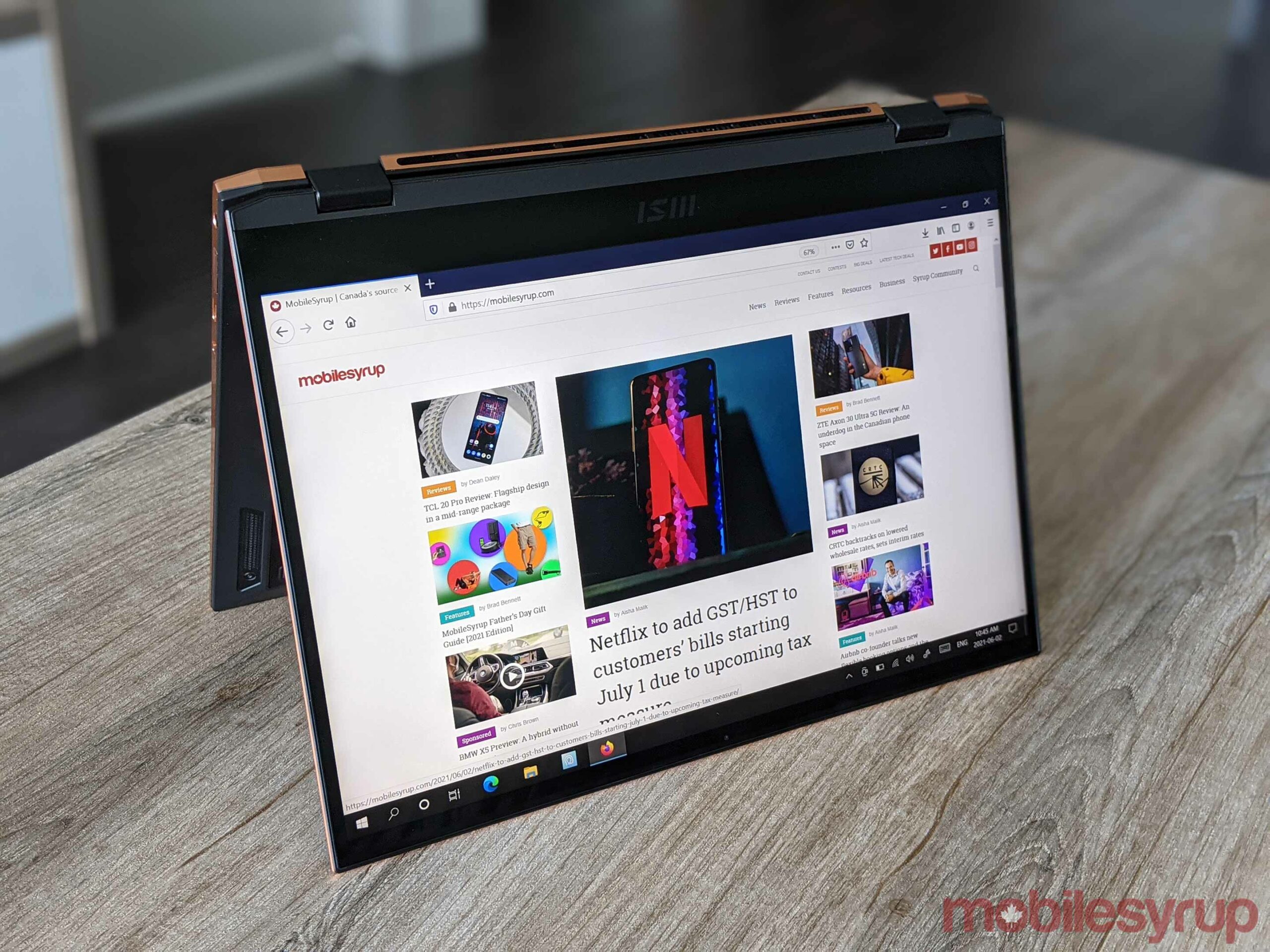 The Summit E13 tailors its specifications to business professionals, packing a punch for users that want the smoothest experience.

With an 11th Gen Intel Core i7 U-series processor, Intel Iris X Graphics, LPDDR4X memory, and an NVMe PCIe Gen4x4 M.2 SSD, this is a business-oriented laptop that can handle multitasking across multiple screens.

Thanks to multiple thunderbolt ports, USB-A, and USB-C ports, its ready to power your workstation.

To put this to the test, I did what all reasonable people would do: I opened 50 browser tabs.

Once I’d had my fun, I downloaded BlackMagic’s Davinci Resolve and imported some of my recent footage. This was made easy thanks to the hidden micro SD card reader. So long as you have micro SD cards lying around, it removes the extra step of uploading your files to the cloud before working with them.

I didn’t run any official benchmarks, but the Summit was able to handle 1080p footage, WAV files, and basic edits in real-time. When colour correction was applied, frames were being processed more slowly, but even my purpose-built workstation stutters at times when running Resolve. Needless to say, I’m impressed.

When it comes to multitasking, I imagine most people are going to be more in line with the tab test. So I turned to some design work to test out the processor.

I booted up a Figma session in Chrome and broke out MSI’s Bluetooth pen.

Without the bluetooth features, the pen functions similarly to a traditional sketching tablet. With the Nluetooth enabled, however, you unlock a wealth of additional features.

Working simultaneously in Figma, Google Slides, and OBS, I was able to seamlessly create new overlays and scenes efficiently thanks to the quick sketch features of the pen, and test out flipping between the scenes using the Bluetooth button on the top of the pen.

The buttons on the pen allow for quick corrections, and other mappable features, such as running slides in Powerpoint. It’s a dream for live presentations.

The touch screen is responsive using a finger, but the pent allows for extra fine control. Similar to other digital pens, the MSI pen reacts to pressure and angle, making it possible to replicate numerous styles of pencils, pens, and brushes. 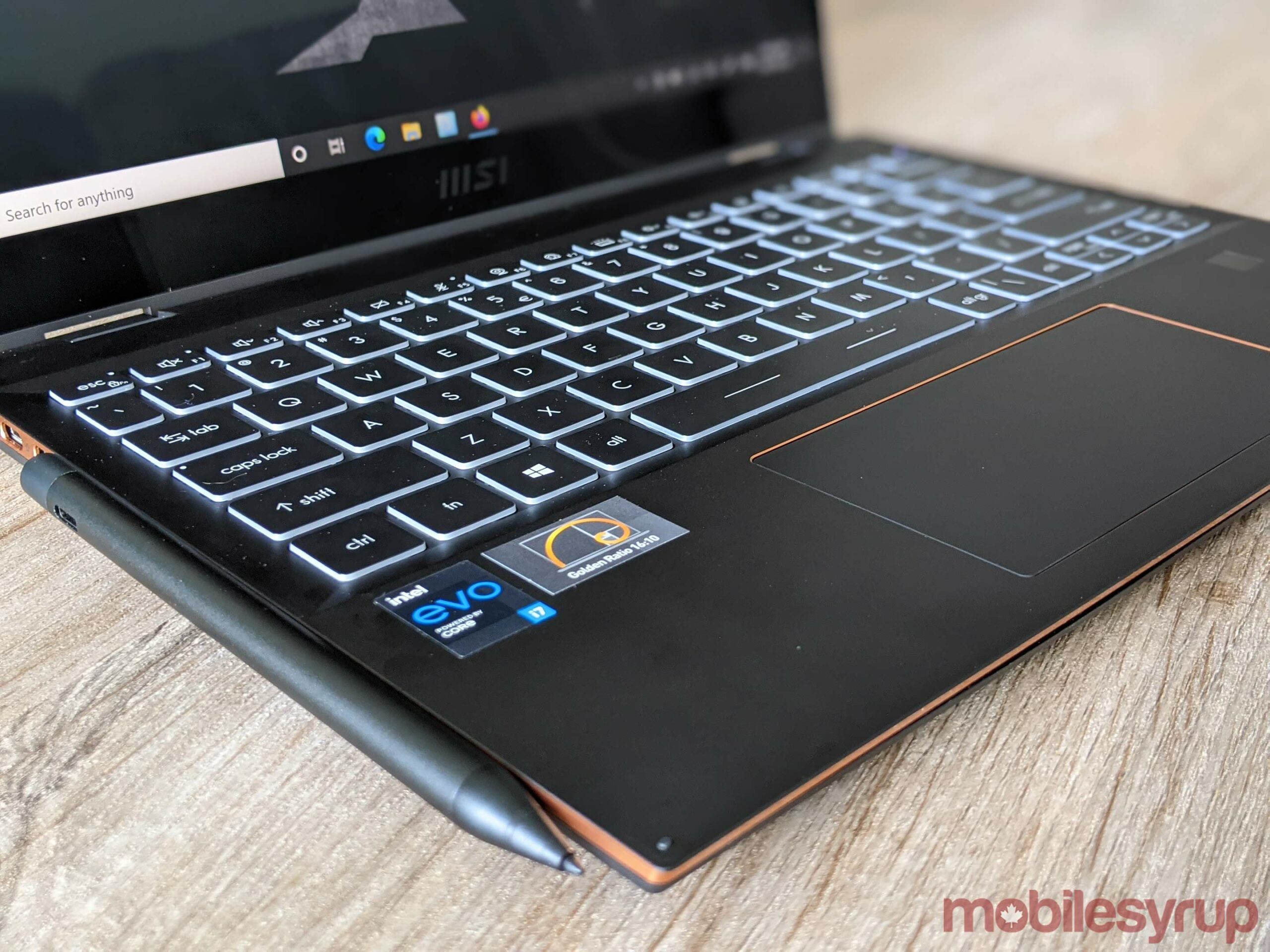 And for those that are working in a shared space, the Summit is a surprisingly quiet device.

The low-travel keyboard means that unless you’re a very heavy typist, you likely won’t be disturbing anybody next to you. Better yet, the cooling has yet to kick in to the point where I’ve noticed the sound

In direct opposition to most laptops, the Summit has a battery life that can be bragged about. I worked on the E13 for the entire day and never hit the battery warning. There are caveats there, as I plugged the charger in while working in Resolve, but the fact that I was able to move about my home without having to bring the charger everywhere I went is a good sign that this is a laptop that will be ideal for travel once everything opens up again.

With my hands-on time with the Summit E13 Flip EVO, I’ve yet to find any major pain points. It feels like the designers have thought of almost everything.

I haven’t tested the screen in an outdoor setting to see if the 500 nits display is bright enough to work without squinting, but I had no problems working next to a bright window, so this doesn’t feel like a concern next to its bevy of features.

It’s a sturdy travel laptop, a powerful workstation, and a multi-purpose tablet.

When I’m back to meetings in the same space, the Summit will change the way that transitioning from personal work to brainstorms will work.

But for now, it’s pushing what laptops can do for those working from home.

There’s a reason that MSI has pushed into the business space, and this is it.

You can find more information about the MSI Summit E13 Flip EVO on the company’s website or through its official retail partners: