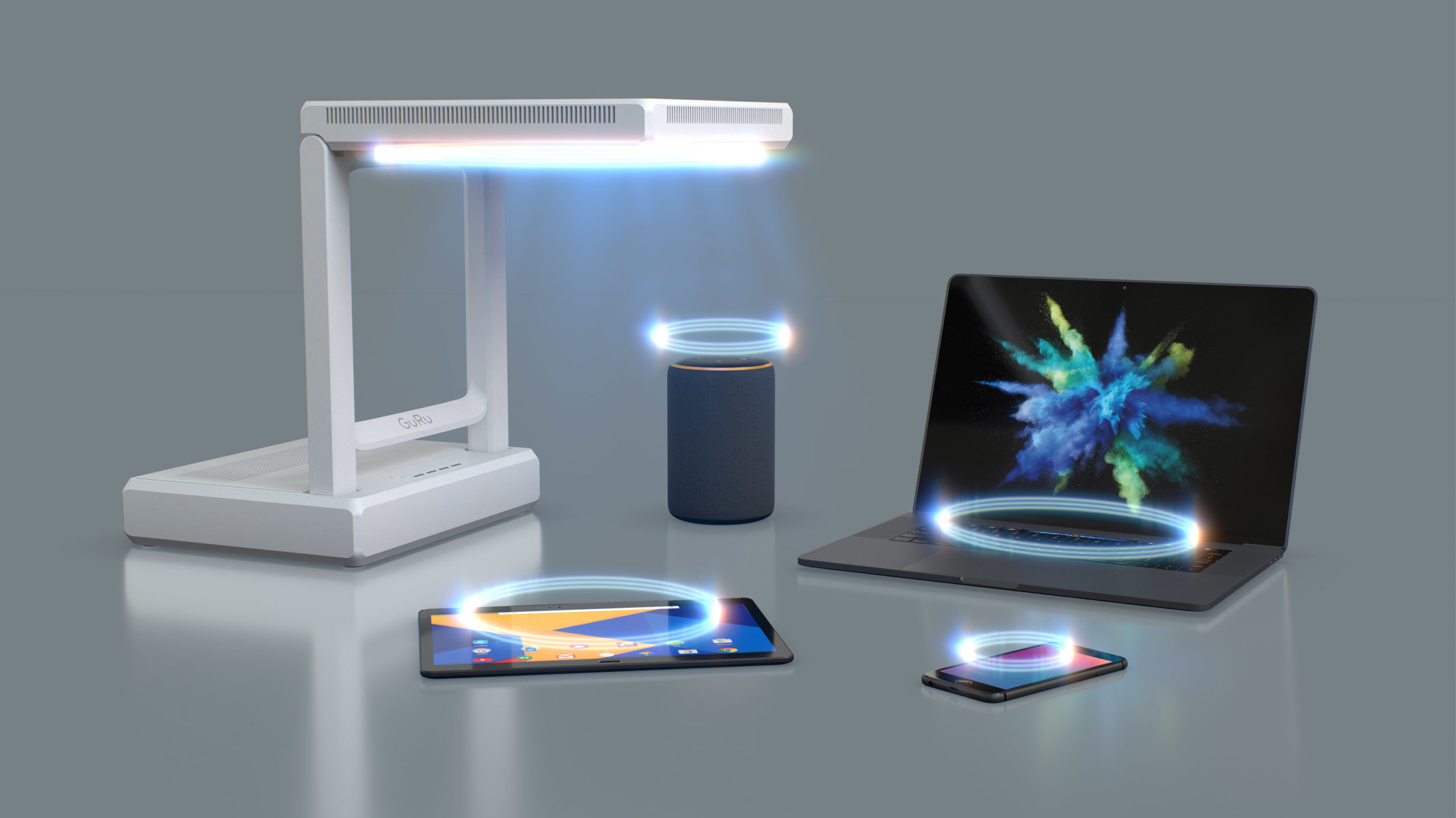 The tech industry has been chasing true wireless power transmission — charging without cords or charging mats — for a long time, but a startup from the California Institute of Technology thinks it’s figured out how to do it.

The company, called Guru, claims it has a wireless charging system than can transmit electricity through high-frequency radio waves. Specifically, it uses millimetre waves (mmWave), one of the crucial technologies behind 5G.

Guru plans to unveil three prototypes at CES 2020, but thanks to an interview with The Verge, we’ve got an early peek at the tech. The three prototypes include a desk charging system that can power up almost any gadget within a few feet, a bigger version about the size of a ceiling fan for powering gadgets in a room, and a Roomba-like roving charger that can move around a space and charge devices.

In a video call will The Verge, Guru demonstrated the desk system. About the size of a large heating lamp, it was able to power a lightbulb sitting a few feet away. A Guru employee put his hand between the objects, which broke the flow of power and caused the light to turn off.

Guru demoed the moving charger as well, which rolled up to a light switch and activated it when it came in range.

The company stressed that lighting isn’t the purpose of its products, but serve as an excellent test case to show how it all works.

The technology behind wireless charging 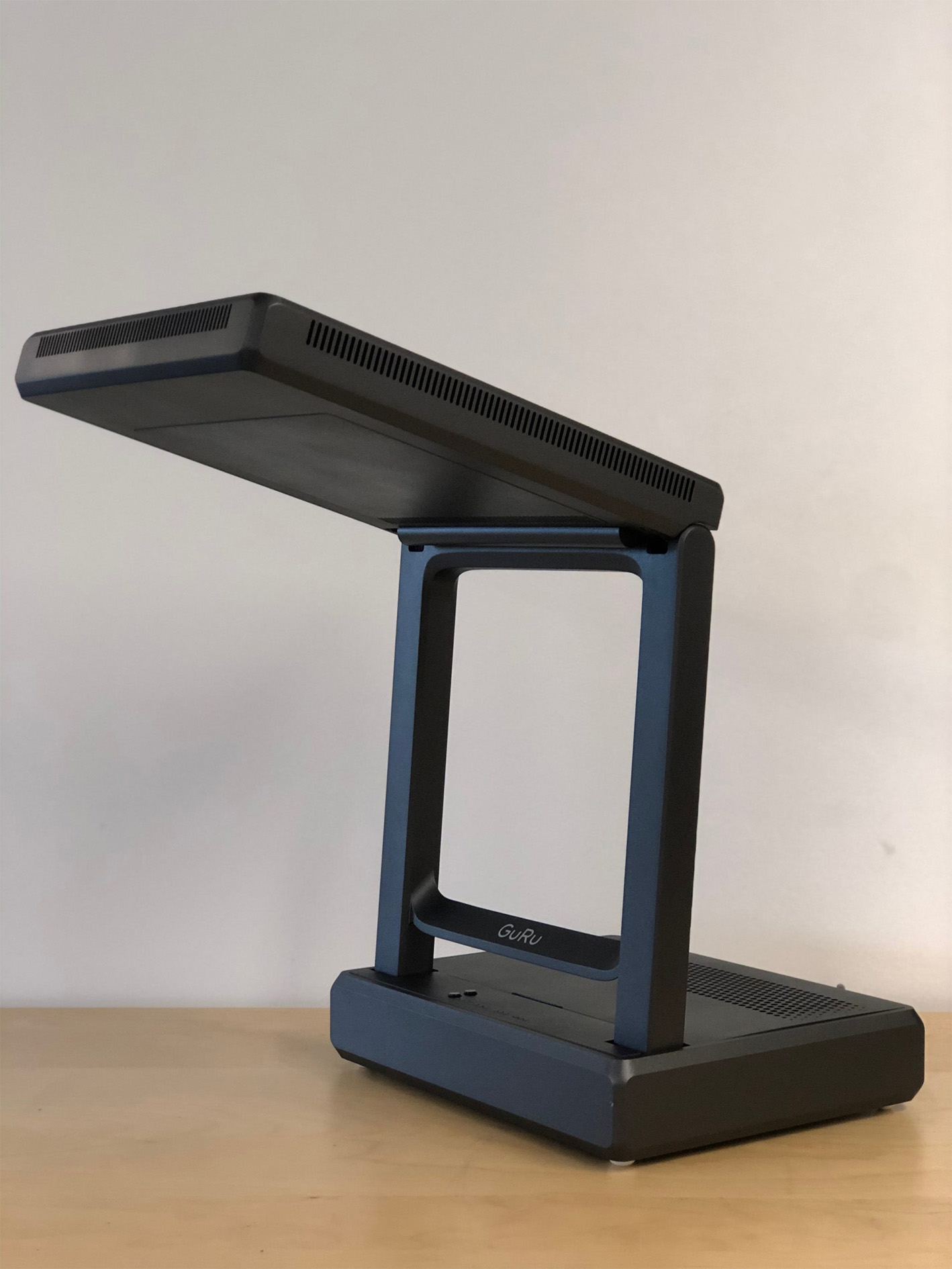 So, how exactly does it work? Guru’s CEO, Florian Bohn, told The Verge that the idea of wireless power isn’t new. “Nikola Tesla had that same idea that power should be sent wirelessly,” Bohn said. Further, scientists have already proven that wireless power transmission works.

Guru isn’t the first, and it’s definitely not the only company bringing wireless power tech to CES this year. It is, however, one of the few using mmWave, which are extremely high-frequency radio waves. That allows Guru’s chargers to send localized beams of electricity transmitted by radio waves to devices that need a charge, which works better than lower-frequency waves.

The company’s other advantage is a technology it pioneered, called RF Lensing, which allows Guru to send multiple beams of energy to tiny receivers. The benefit is that Guru can significantly shrink transmission devices so they can fit on a desk or mount to a wall. It also allows Guru to charge small electronics like cellphones, smart home products or IoT devices.

Bohn says the core technology behind all these applications is fundamentally the same, just at different scales, power levels and ranges. Guru’s tech is able to be more versatile, delivering lower-power over short distances and large power over long distances.

Safety and a vision for the future

The first question most will have is if wireless power transmission is safe. Guru says it is.

Bohn told The Verge that the beams are safe to travel through humans. However, the company also wants to enable a system that lets users control when the charging beams are active and allow them to turn them off manually.

Further, Bohn said that Guru is going through the same regulatory approval process as other radio devices.

Currently, devices need physical receivers to work with Guru’s charging system. To use it with your phone, for example, you’d need to place a small rectangular receiver on the back of the phone. Guru is working on making smaller receivers.

Additionally, charging rates are pretty slow, more comparable to what you’d get with a slower Qi wireless charger. However, that should improve with time.

Guru’s vision is that the technology will go beyond eliminating cords. According to Bohn, a proper system for wireless power transmission will change how we use devices, as well as what devices we use. For example, a future home could have battery-powered gadgets scattered everywhere with no need for cables since power will flow through the air.

In the case of phones, the majority of the space is taken up by battery. With wireless charging always keeping you topped up, manufacturers could reduce reliance on batteries and shrink phones.

It’s a grand vision, but one that may be years away. First, Guru will have to prove their system is better than traditional cable charging or Qi charging — a challenging feat in and of itself.