National carrier Rogers is offering Manitoba residents double the data allotment when they sign up for a 10GB or 15GB Share Everything plan.

According to the Rogers website, the “extra data won’t expire and there are no speed restrictions of throttling to slow you down.”

The deal is available across all pricing tiers, from BYOD to Premium+ Tab, meaning customers can get 20GB of data for $70 on a BYOD plan with unlimited Canada-wide calling, or 30GB of data for $80 on the same tier. 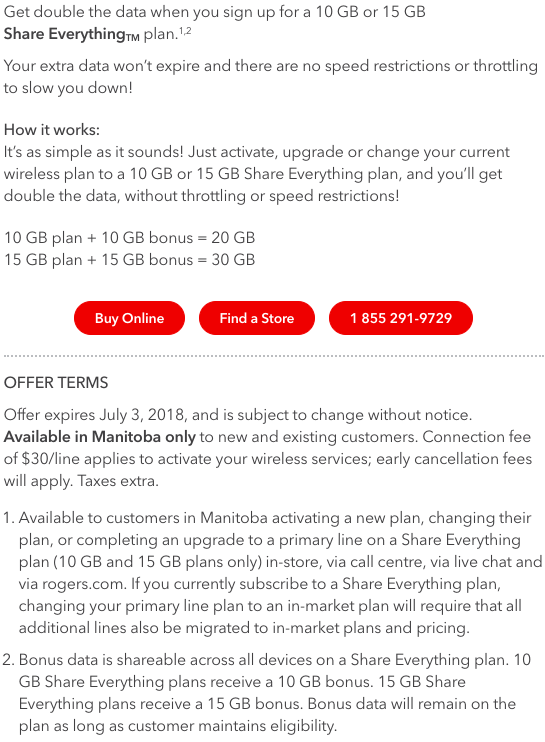 The offer expires on July 3rd, 2018, and is available for new and existing Share Everything subscribers in Manitoba.

There’s also a $30 activation fee for each line.

Subscribers can purchase the plan online, in-store or over the phone.

Rogers Share Everything plans are designed for families, and allow multiple subscribers to consume data from the same bucket. It’s worth noting that the bonus 10GB or 15GB of data is also included in the shared bucket.

This means that a family of four, for example, can split either 20GB or 30GB amongst themselves, rather than just 10GB or 15GB.

Response from other carriers

The Rogers offer is impressive, and it appears that Telus and Bell haven’t made a move to counter Rogers in Manitoba quite yet.

Both Telus’ and Bell’s Manitoba websites seem to indicate that they’re maintaining their regular pricing for family plans.

It’ll be interesting to see how Canada’s second and third-largest carriers respond to Rogers in Manitoba.

It’s also worth mentioning that regional service provider Xplornet — which doesn’t currently operate a mobile network in the province — recently posted retail job listings in preparation for what appears to be a wireless launch in Manitoba.

Once Xplornet formally launches its wireless division, it will no doubt face steep competition, especially when it comes to convincing existing Rogers Share Everything subscribers to switch to a different carrier.