Electric buses will soon hit the roads in Edmonton

Five buses will arrive next year, the rest are coming in 2020 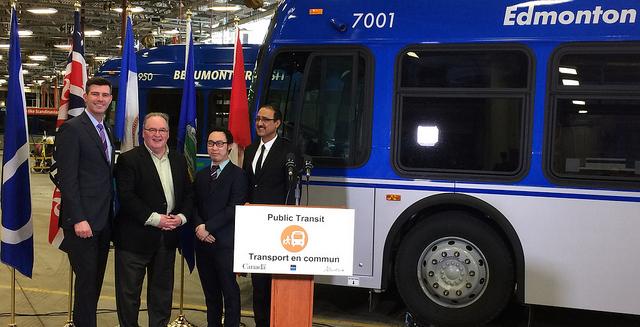 Edmonton, Alberta, will soon be a greener place.

Federal, provincial and municipal officials announced this month that the western Canadian city will soon get electric buses. The three levels of government jointly announced $43 million CAD in funding to purchase a fleet of 40 electric buses for Edmonton Transit Service.

“I am so pleased that the Government of Canada is investing in these new electric buses, which will not only decrease air pollution but improve services so Edmontonians can spend less time in transit and more time with their families,” said Amarjeet Sohi, minister of Infrastructure and Communities (IC).

The government of Canada is providing over $21.5 million toward the project, while the governments of Alberta and Edmonton are contributing roughly $10.8 million each.

The city expects to receive five buses next year, with the remaining buses hitting pavement through 2020. The buses cost about twice that of the diesel models currently in use, but are cheaper to operate and maintain, Edmonton Mayor Don Iveson told the Edmonton Journal.

Ontario also recently announced that it is launching an electric bus pilot project in Brampton and the York Region. The full cost of the project will total around $40 million.

Image courtesy of the government of Alberta.