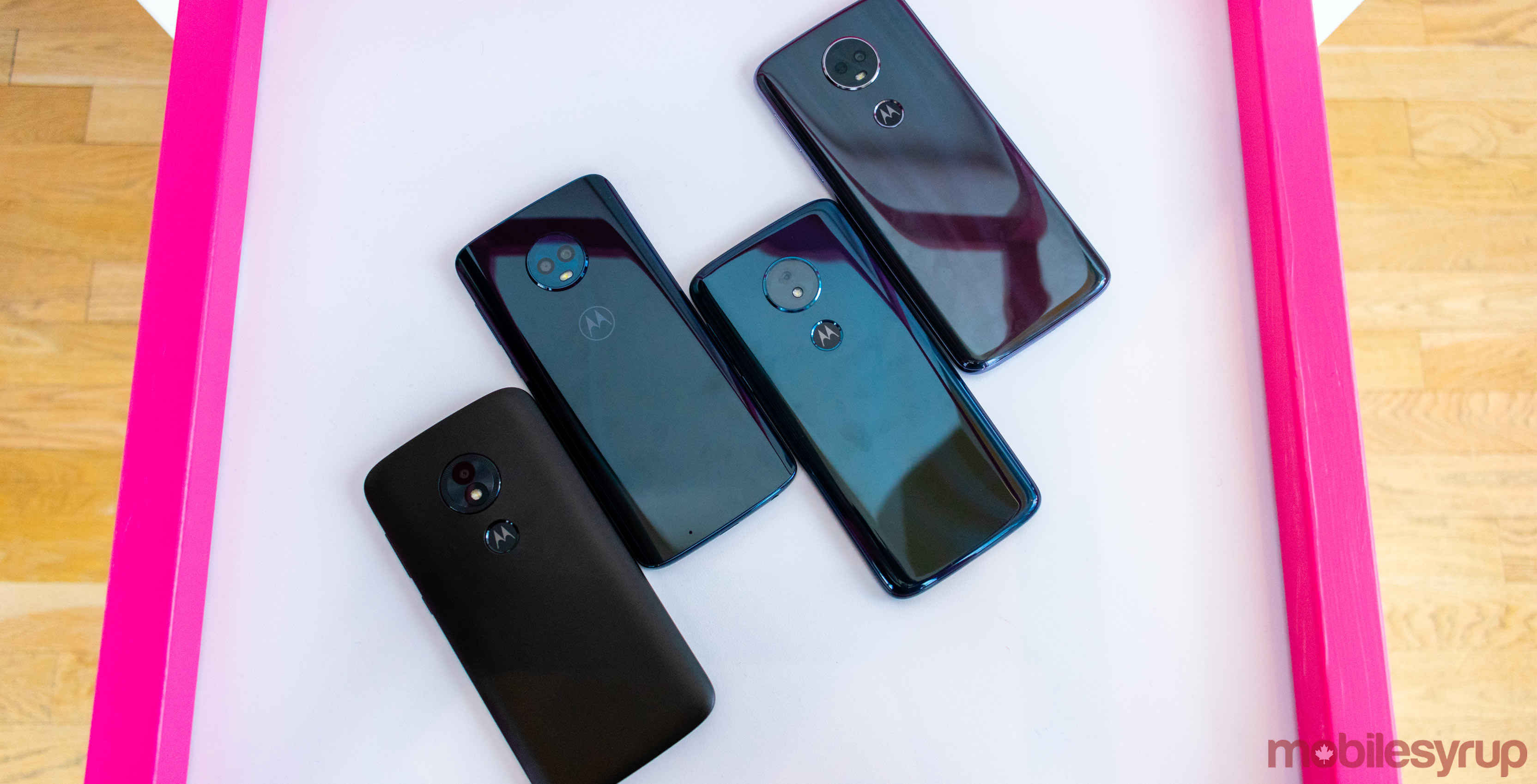 Credit is owed where it’s due, and Lenovo-owned Motorola has successfully catered to discerning — and cash-strapped — shoppers since introducing the Moto G in 2013 and the Moto E in 2014.

The Moto G and Moto E are affordable, mid-range devices aimed at incorporating as many premium features in an attractive package as possible, without forcing device-owners to overdraw their bank accounts in the process.

As the Moto G6, G6 Play and the Moto E5 Plus and E5 Play show, Motorola’s not done ensuring that mid-range devices continue to be attractive options for future device-owners. 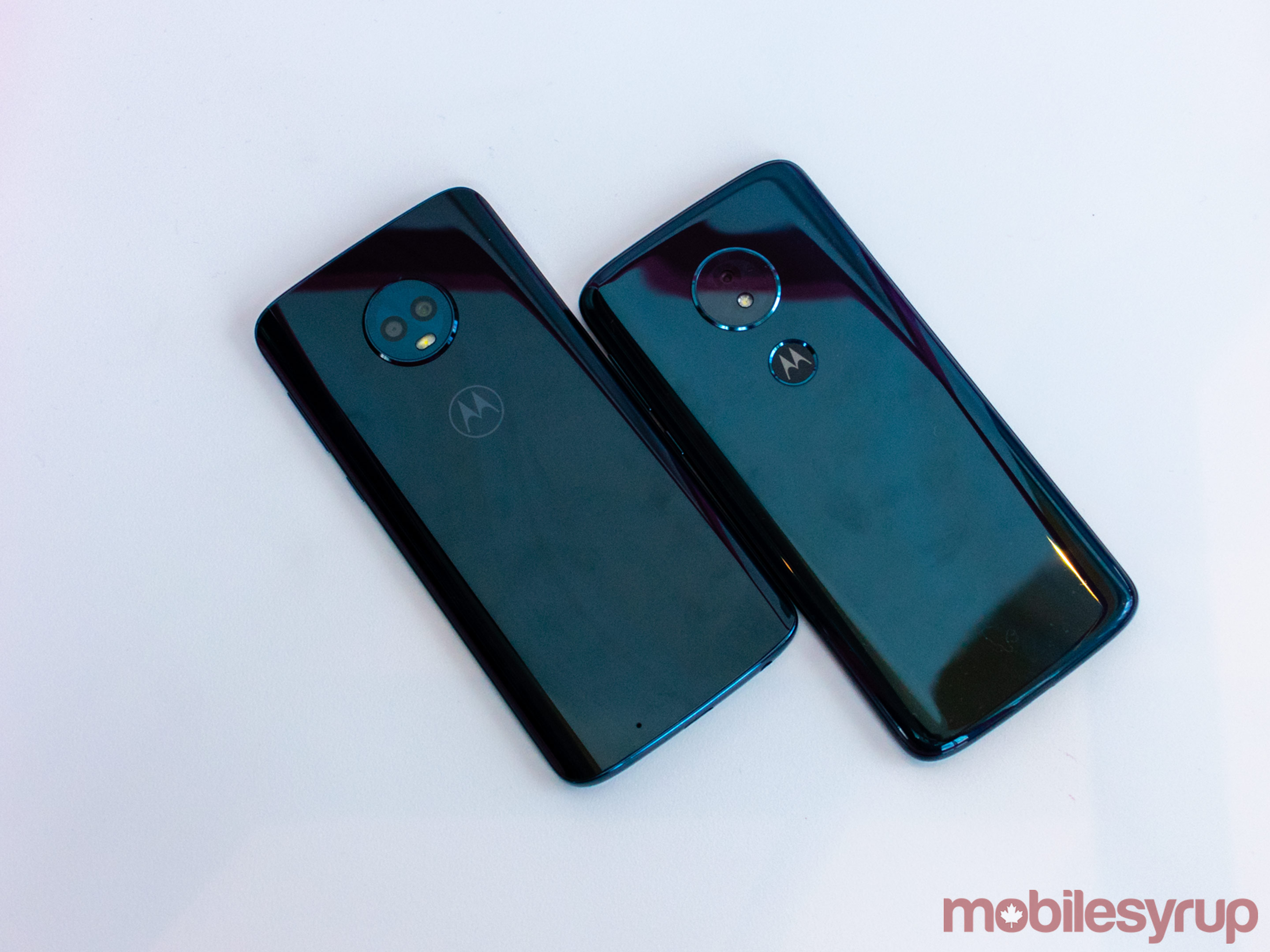 Pick up the Moto G6 and its less feature-packed G6 Play sibling, and you’ll be surprised at how premium both smartphones look and feel.

Gone are the garish lines, the giant front-facing fingerprint sensor and the giant top and bottom bezels. In their place are slimmer frames and slimmer bezels, and a more modern look.

Granted, the Moto G6 still features a front-facing fingerprint sensor, but it’s an incredibly slim one that’s reminiscent of the Huawei P20 Pro’s sensor. The G6 Play’s fingerprint sensor is on the back of the device. 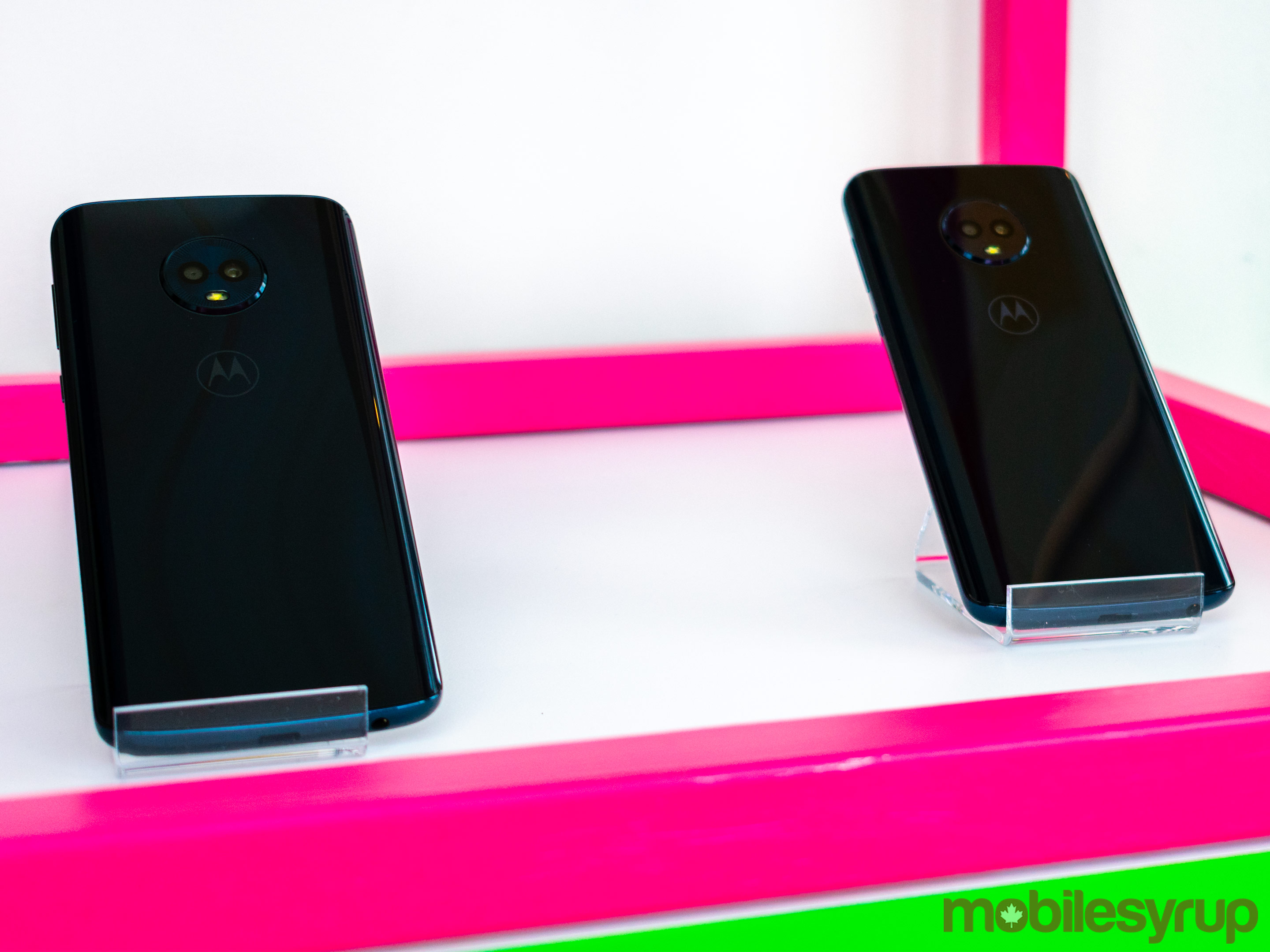 Both phones are gently curved, allowing them to fit comfortably in most hands. Even though both devices feature 5.7-inch screens, the thinner top and bottom bezels translate into easier-to-hold phones. Both devices’ are also made extra grippy thanks to their glass front and back.

That said, glass bodies mean more breakable devices, so only time will tell if these phones can survive regular wear-and-tear. On the subject of durability, both phones are coated with a P2i water-repellent nano-coating, which means they’re not water-resistant. You won’t need to worry if you spill water on the phones, but definitely don’t take a shower or go swimming with them.

One last note on the G6’s and G6 Play’s all-glass bodies: these phones are insane fingerprint magnets. In the short time that I tested both phones, it took no time at all for both devices to get covered in my fingerprints. In fact, the phones are such fingerprint magnets that Motorola executives at a pre-announcement event in New York City carried several screen-cleaning wipes to rub down the devices after everyone had a chance to play with them. 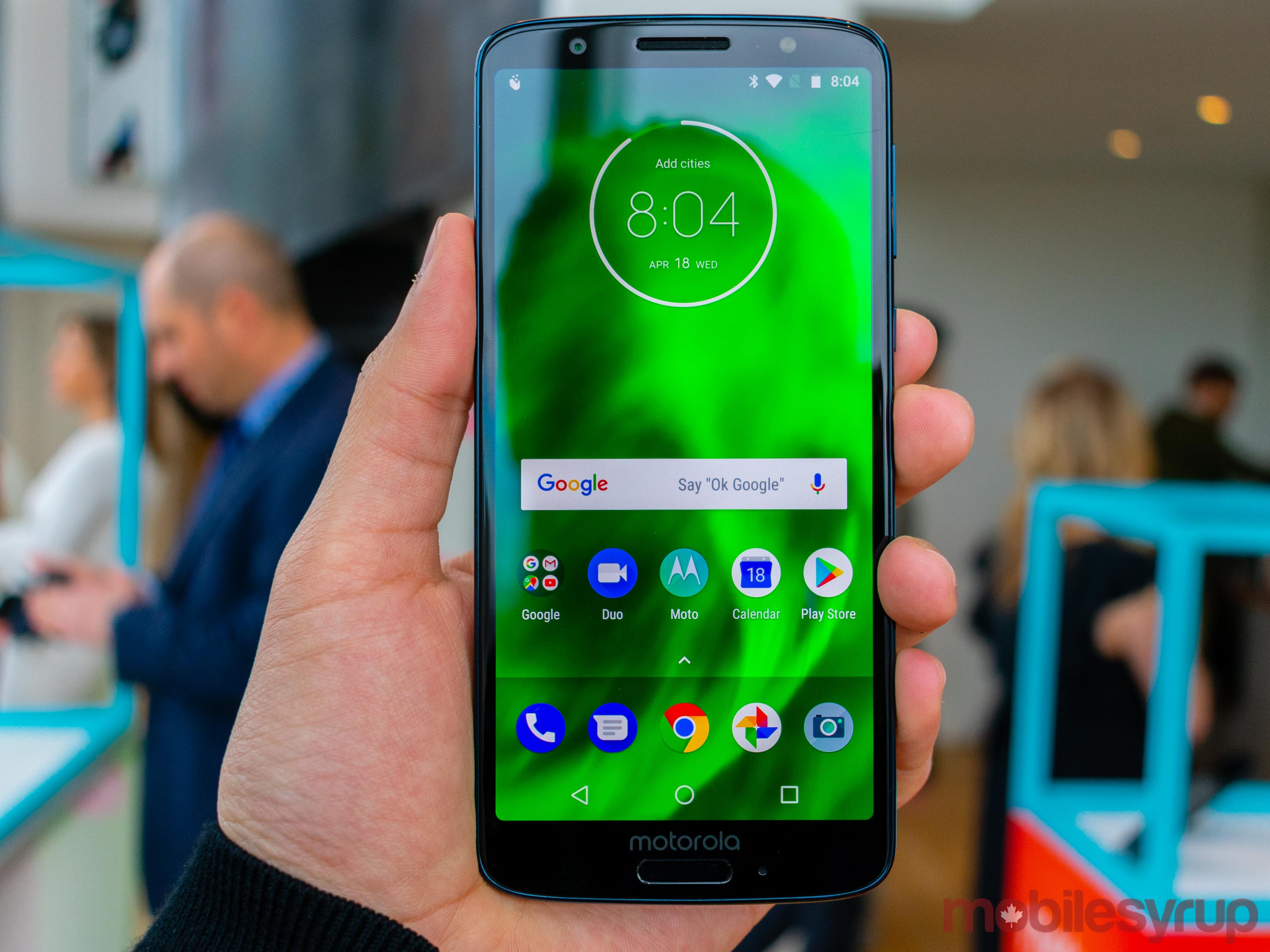 All that glass also means that the phones are also incredibly reflective. I’ll be the first to admit that the reflective surfaces are pretty to look at, but taking photos proved to be challenging. I doubt that many users will express a similar complaint, however.

A new and improved camera 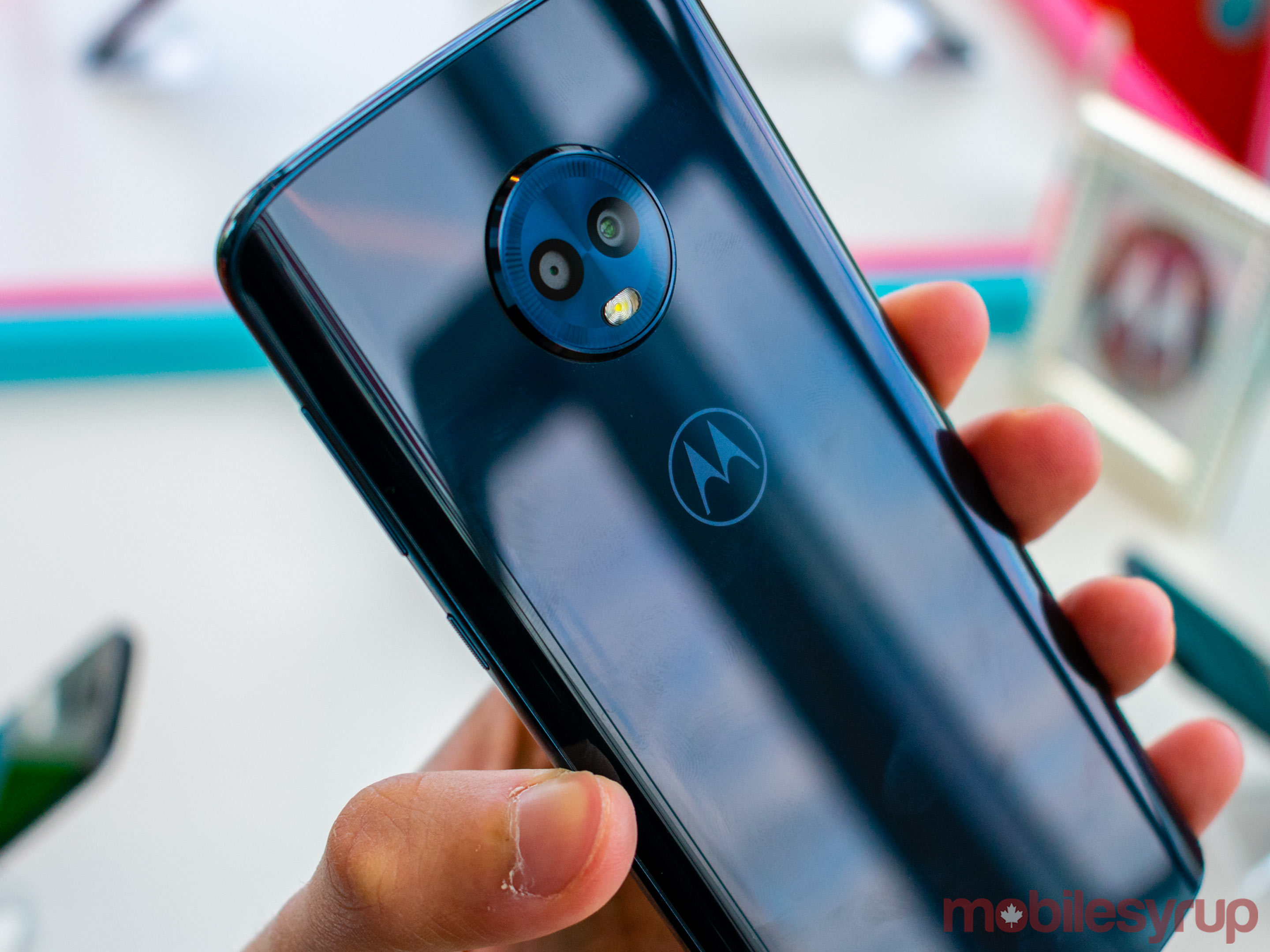 All of the newly announced Moto phones feature improved camera software and hardware, but the G6’s dual rear-facing camera setup is perhaps the most noteworthy.

The phone produced images that were, for the most part, faithfully recreated, but this isn’t a camera that’s going to compete with something like the Pixel 2 XL or the Samsung Galaxy S9/S9+. The camera consistently launched and took photos quickly, and the twist to activate Moto Action returns on this phone (and all of the other recently announced Moto phones). 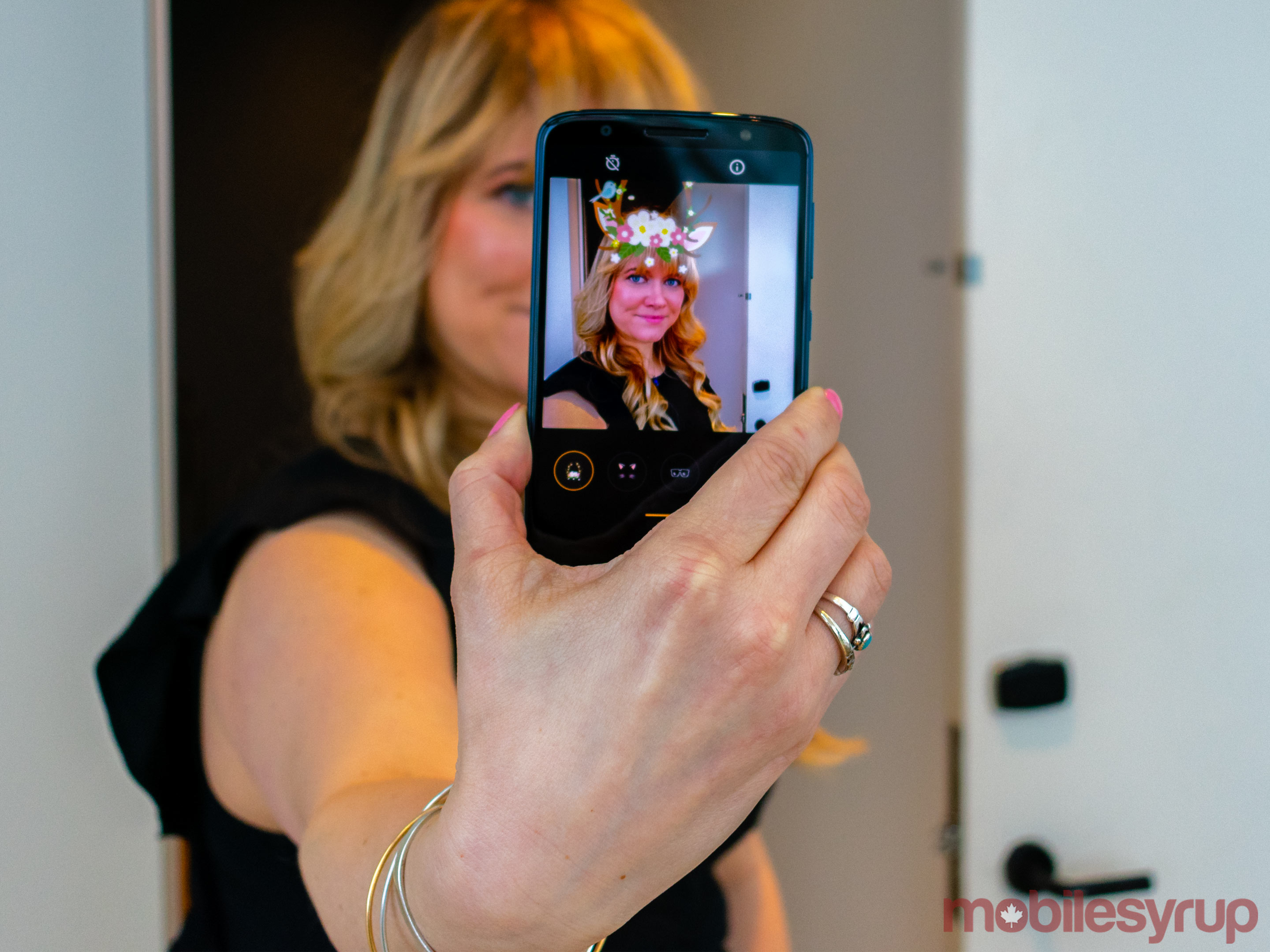 The G6 also makes use of its dual cameras by providing users with a portrait mode — that allows users to snap photos and control the background bokeh — as well as a spot colour mode that allows users to maintain the colour profile of a single object while turning everything else black-and-white.

In addition to portrait mode and spot colour mode, the Moto G6 comes with the ability to add face filters using both the rear cameras and the selfie camera. It’s yet another cute gimmick that worked quite well. 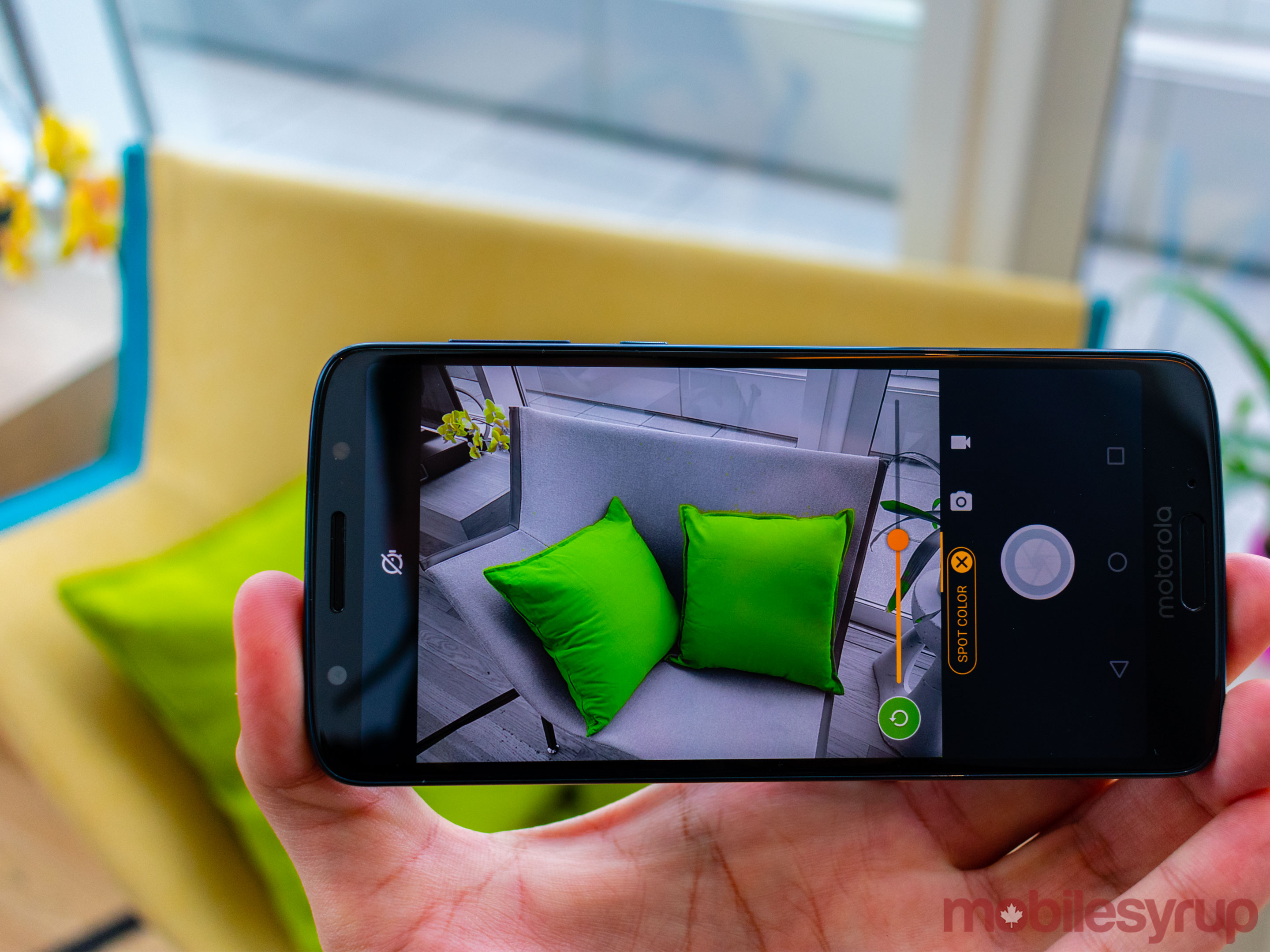 For instance, when testing out the feature on a Moto E5 Plus, the Moto G6 actually misclassified the device as a Samsung Galaxy S8 — a feat that brought a small amount of embarrassment to nearby Motorola executives, but that was nonetheless rather funny.

Landmark recognition is also a feature that will require more testing before anything conclusive can be said about it. Motorola claims that the Moto G6 should be able to accurately identify and relay information about well-known landmarks, but when the phone was pointed at the New York City’s Freedom Tower, the device was unable to even acknowledge that it was pointed at a building. 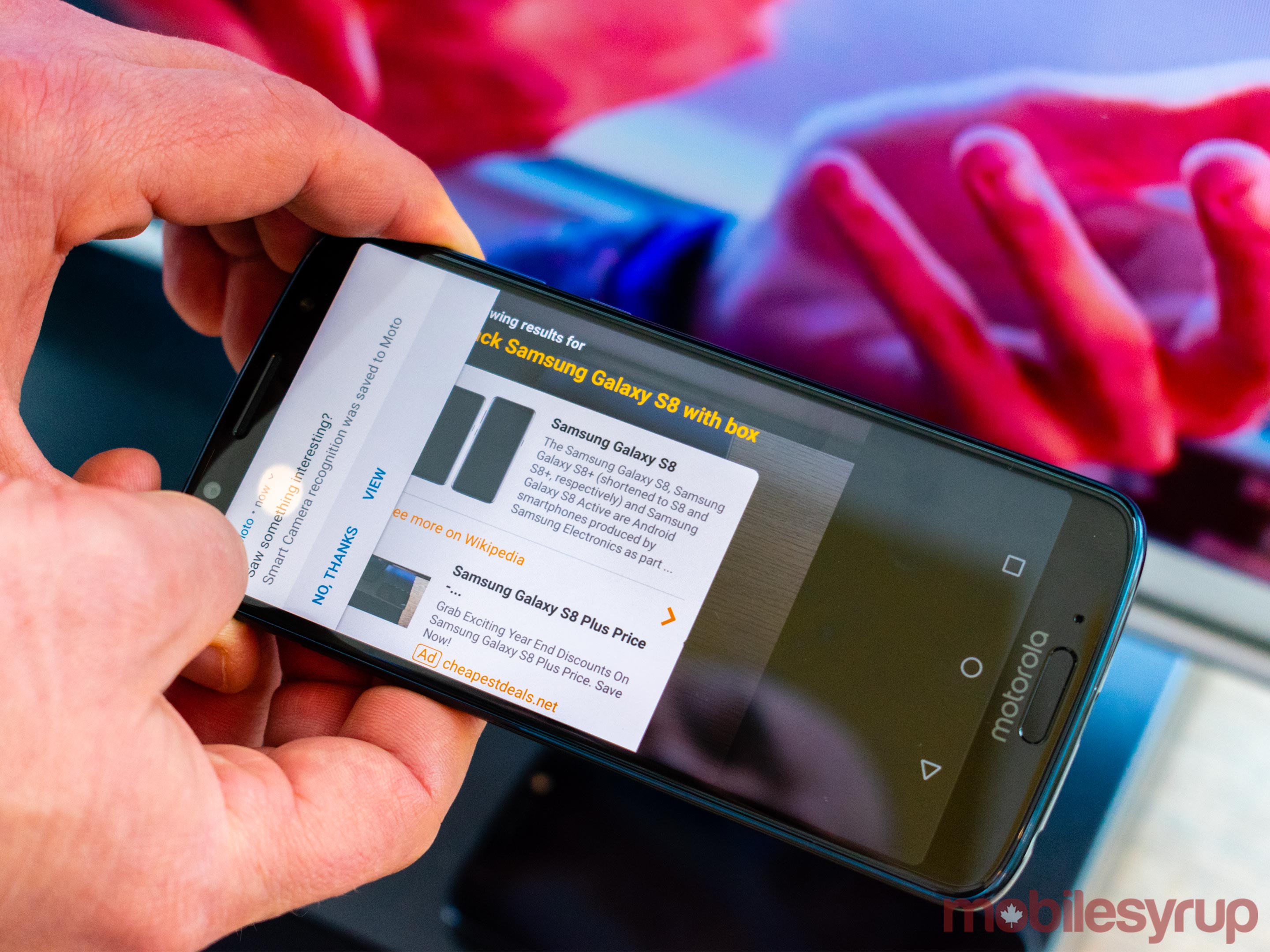 In the Moto G6’s defence, the New York City skyline is full of important landmarks, so it’s possible that the phone simply got confused. That confusion, however, could be an indication that the feature isn’t entirely ready yet. Once again, more testing is necessary for a meaningful opinion.

Motorola also promises that the Moto G6 will be able to scan non-document text and translate that text into manipulatable digital copy. However, I didn’t get a chance to test this feature myself. 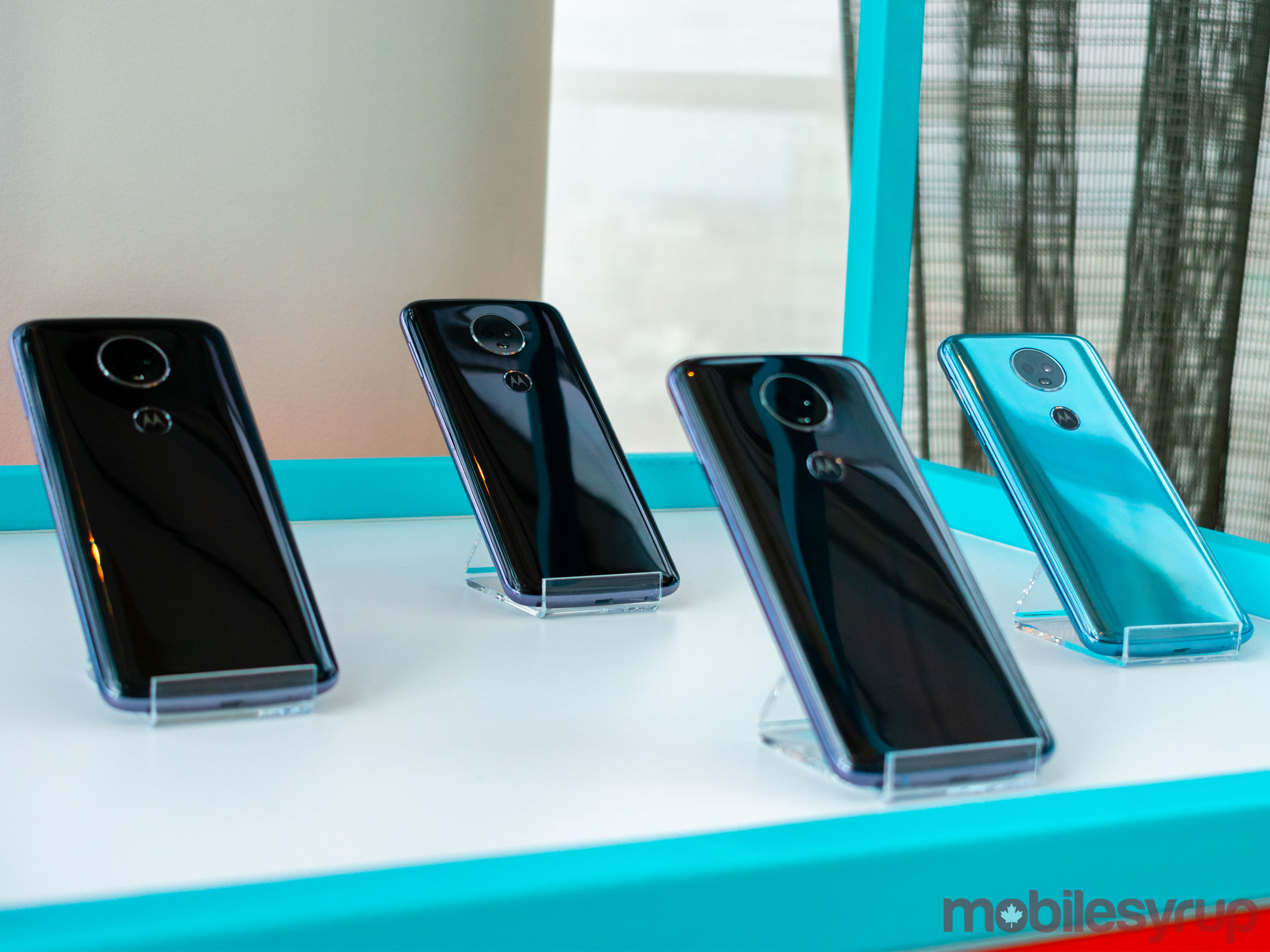 While the Moto G6 and Moto G6 Play are undoubtedly the crown jewels of Moto’s mid-range market plans, the company’s latest Moto E devices are no slouches either. Well, the Moto E5 Plus is no slouch; in comparison, the Moto E5 Play seems like a dated gamble.

Described as a device for “Weekend warriors” by one Motorola executive, the Moto E5 Plus features a gargantuan 6-inch Max Vision HD+ display, with an 18:9 aspect ratio, as well as an equally gargantuan 5,000mAh battery. It’s also got a glass back that makes it almost indistinguishable from its Moto G siblings. Like the 2018 Moto G devices, the Moto E5 Plus is supremely comfortable to hold, even though its screen is absolutely gigantic. 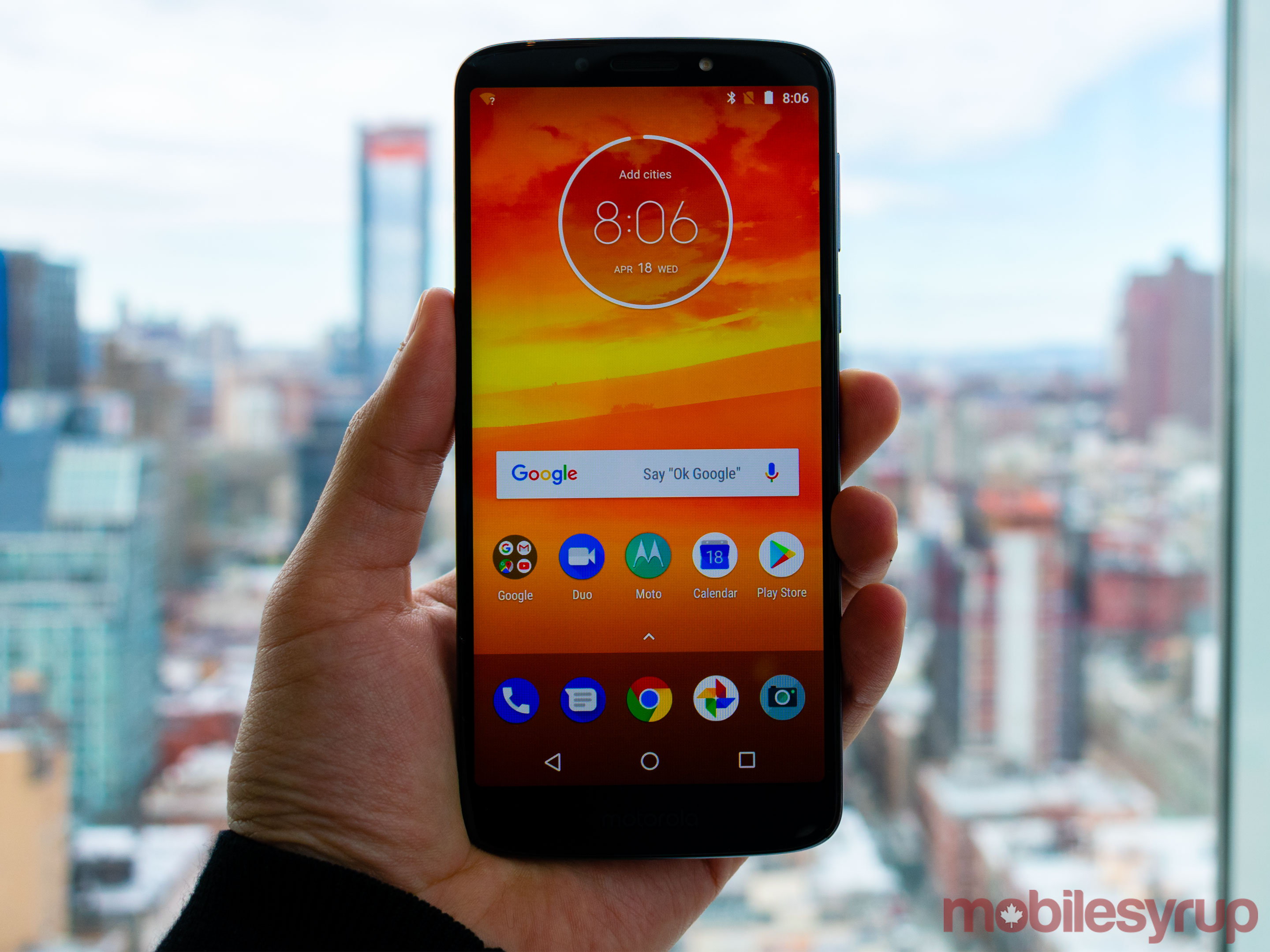 Of course, one shouldn’t mince words — the display isn’t particularly impressive. In the limited time I had to test the device, the Moto E5 Plus produced fairly accurate colours, but didn’t do anything to wow me. 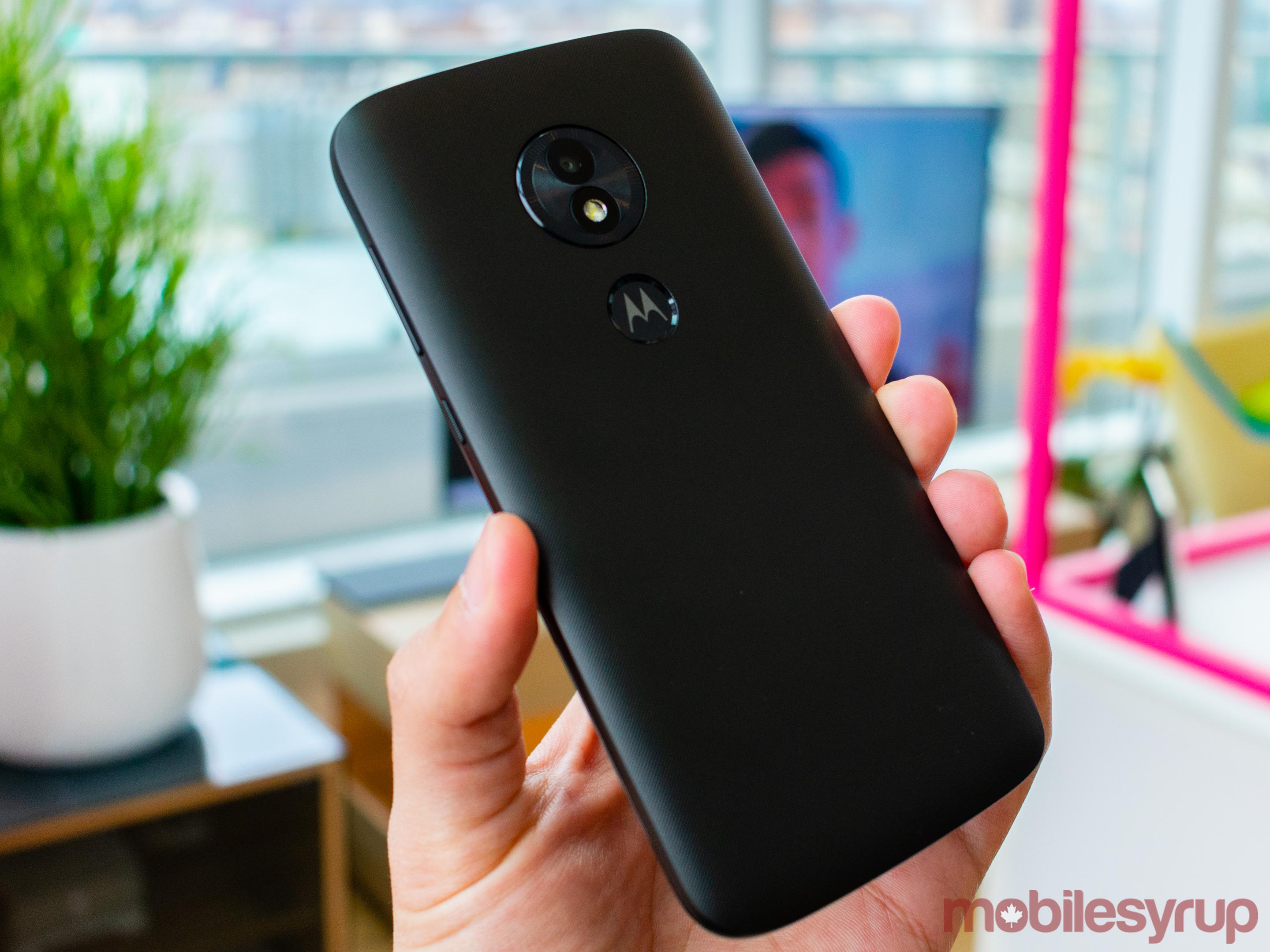 I’m not quite so sure that the Moto E5 Play will convince as many people to give it a chance, however. The device looks and feels quite dated, with a plastic body, thick top and bottom bezels, and a 5.2-inch HD LCD display. The E5 Play’s camera is adequate and photos turned out well enough, but were noticeably lower in quality when compared to the Moto G6, G6 Play and E5 Plus.

The E5 Play is very much an entry-level smartphone, but it should be a great choice for parents looking to give their younger children a small modicum of cellular responsibility. 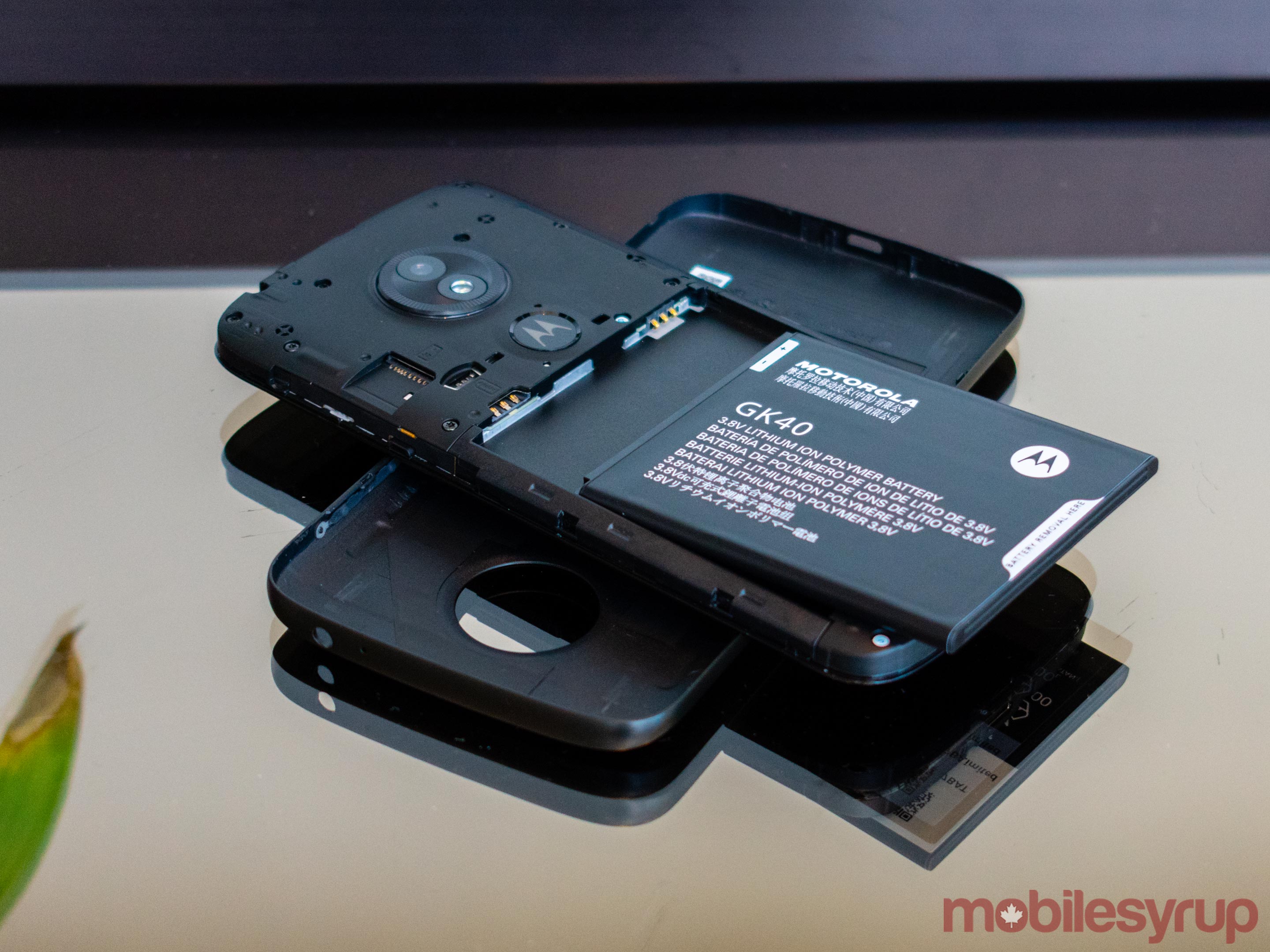 For what it’s worth, the Moto E5 Play allows users to remove the phone’s back cover and even replace its battery.

Both the E5 Plus and the E5 Play are water-repellent and both phones have a headphone jack.

In terms of carrier availability, Motorola said that the phones will be available this spring at most major carriers. This story will be updated when we receive both Canadian pricing and carrier information.