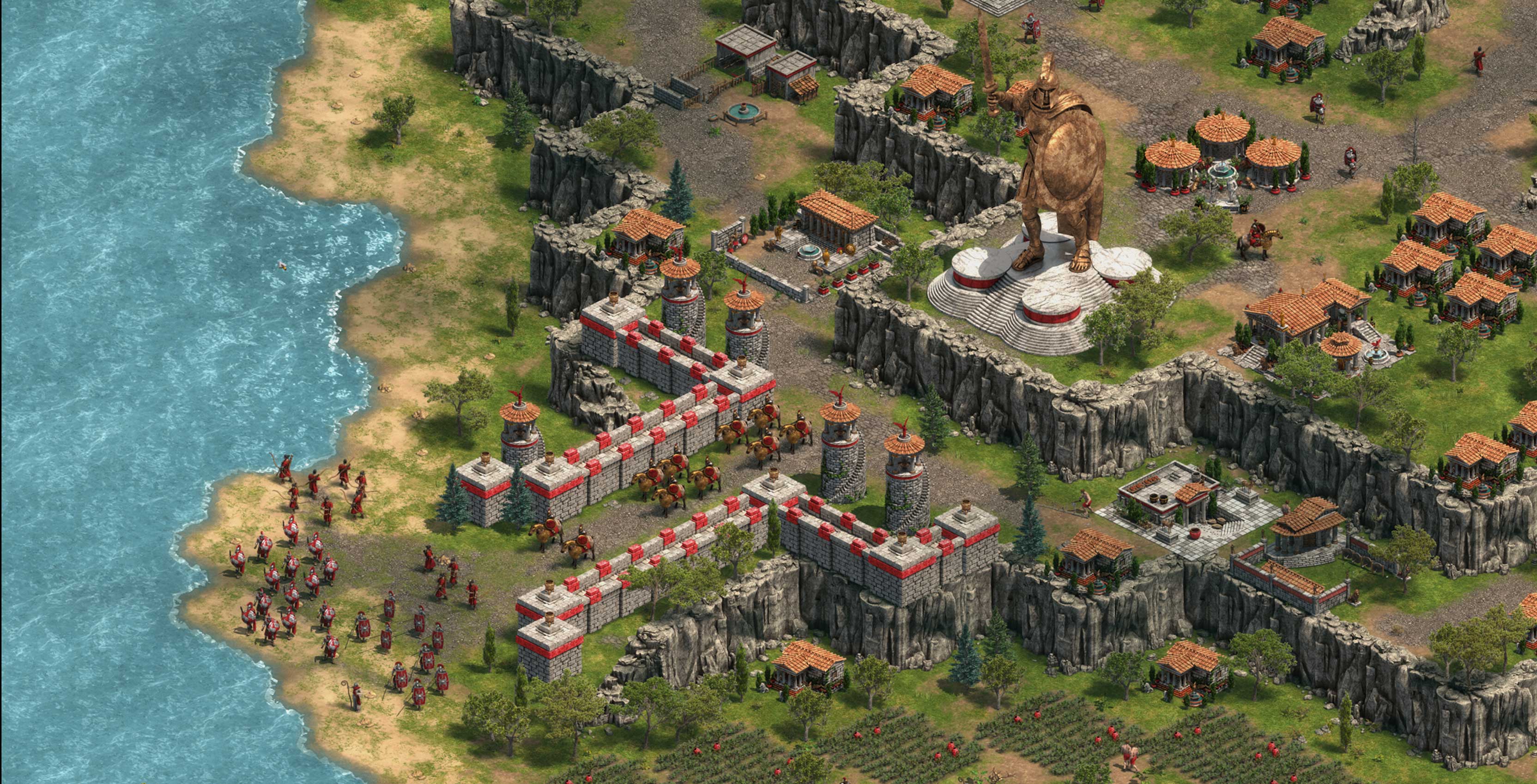 Some of my favourite childhood and teen memories involve the Age of Empires series.

My friends and I spent countless after school afternoons playing Age of Empires and Age Empires 2: The Age of Kings. We even at one point convinced one of our middle school teachers to let us create an Age of Empires club.

Yeah, we were that cool.

So it was a lot of excitement that I greeted the news that Microsoft not only planned to release a new entry in the historic franchise, but that the company was also funding a ‘Definitive Edition’ remake of each of the first three entries in the series, begining with the game that started it all, the original Age of Empires (AoE). 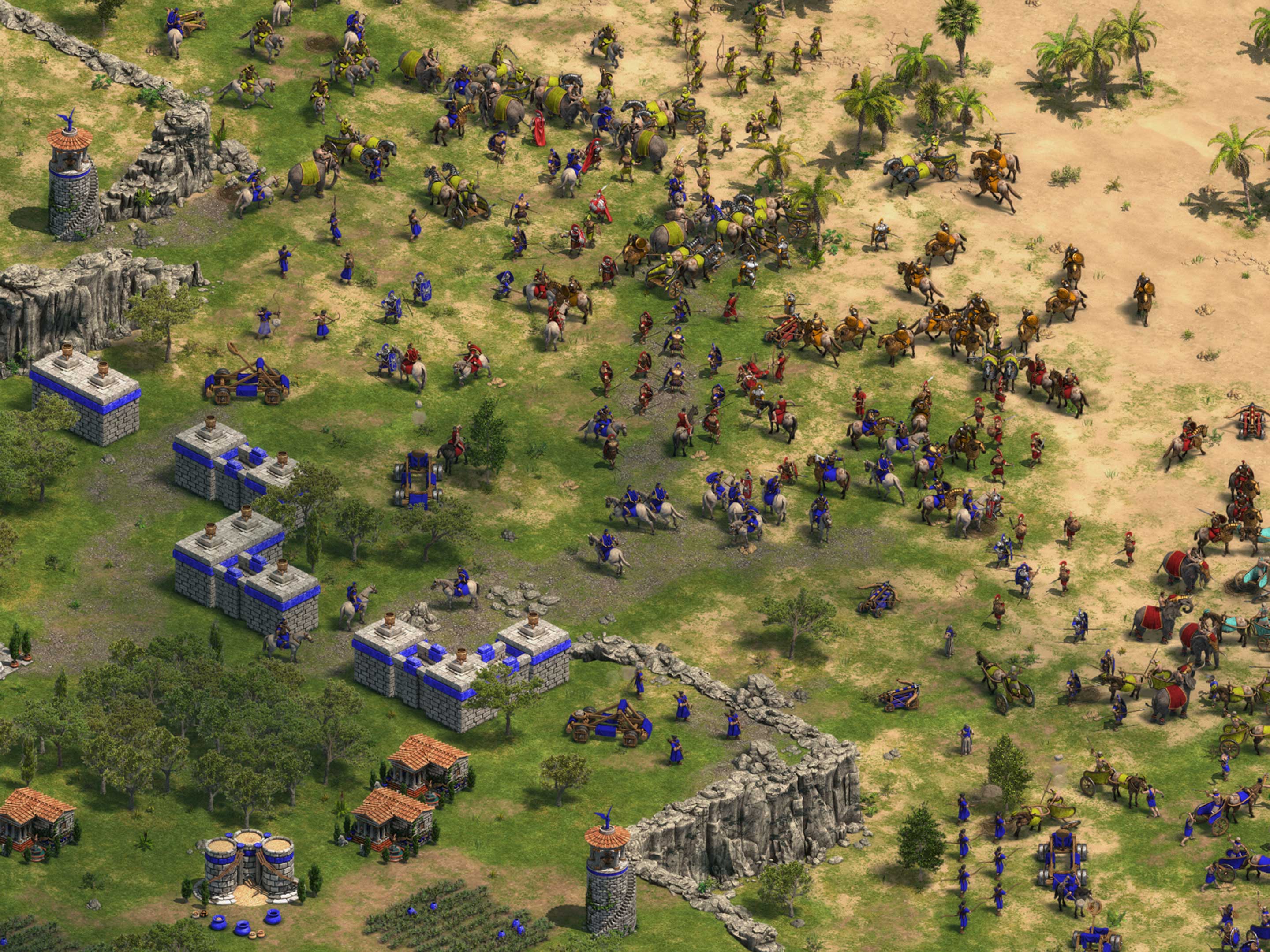 The original AoE is an interesting historical relic.

It’s undoubtedly the game that spawned one of the greatest franchises in gaming history, but so much of what series fans remember of the game is tied to its successor, the untouchable Age of Empires 2 and its expansion, The Conquerors.

With Age of Empires: Definitive Edition, which came out on February 20th, the game’s developer, Forgotten Empires, had the nearly impossible task of modernizing the first draft of a series that would become a classic. I spoke to the game’s creative director, Adam Isgreen, about how his team took on the challenge of reviving a game that’s more than 20 years old.

Q: What’s your history and the team’s history with Age of Empires?

Adam Isgreen: I’m a creative director here at Microsoft Studios. I’ve been making video games now for 25 years. My experience goes way back to 1993 when I got my start at SSI making Dungeons and Dragons Gold Box roleplaying games for the PC. I left there and went to work at Westwood Studios where I worked on all the Command & Conquer games.

I ended up leaving and going to work at Petroglyph Games and made even more RTS games; I worked on Universe at War: Earth Assault and Star Wars: Empire at War. I did my own company for a while and then ended up here at Microsoft, and Microsoft of course has Age of Empires.

As we started talking about bringing Age of Empires back, and what we wanted to do with the series, I was asked, “Hey Adam, do you want to work on this game?” 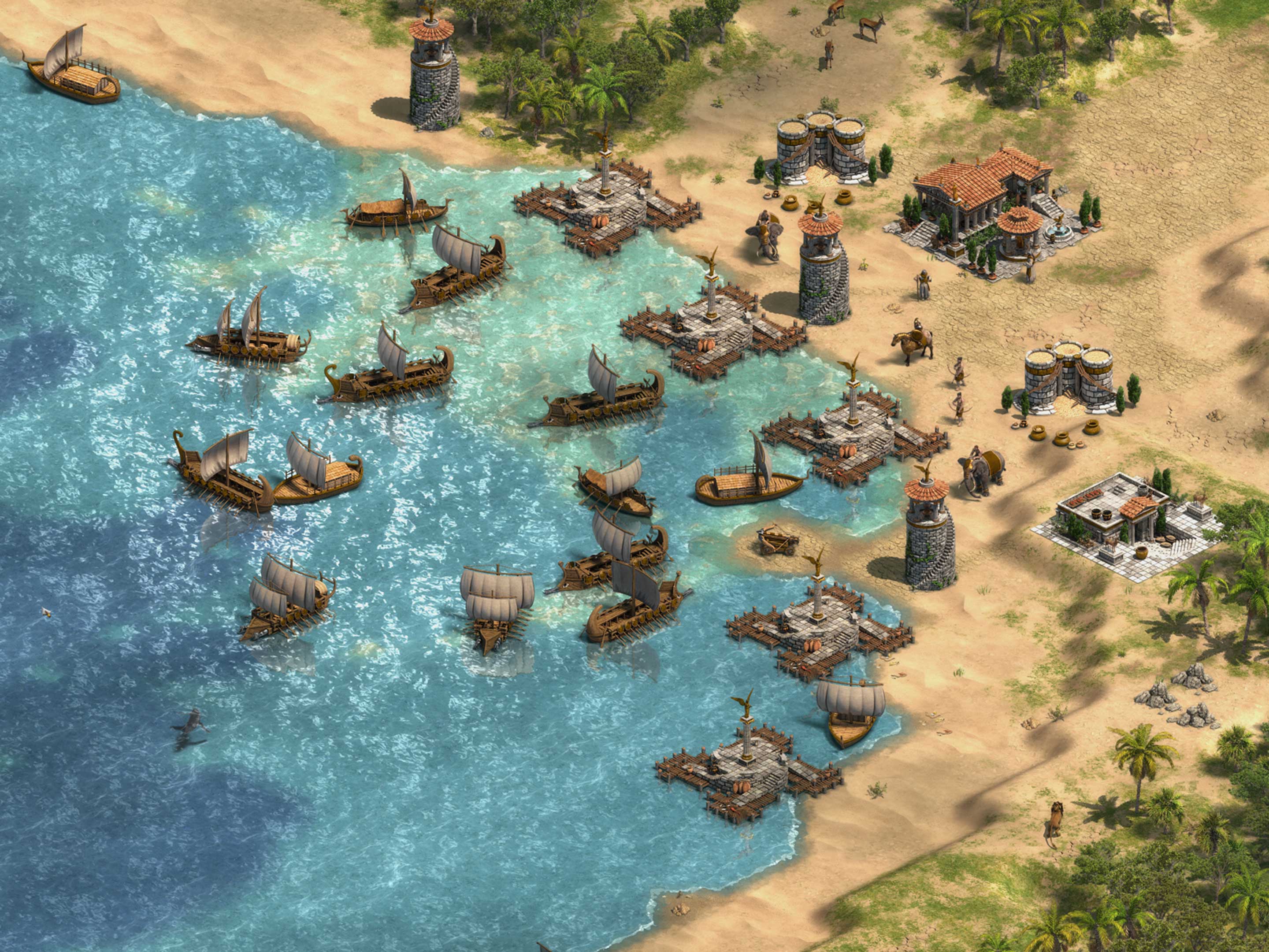 As for the team, Forgotten Empires is a team coders, designers and artists that started as modders. They made this incredible mod for Age of Empires 2 called The Forgotten (available on Steam). It was the first expansion for Age of Empires in a long, long time. We reached out to them and asked them, “Do you want to make this official?”

That’s how they got their start. From there, they’ve grown and added more people. It’s a big learning process starting a game company and being actual game developers. They’ve been great. It’s a dedicated team of very passionate Age of Empires fans, across the whole series, who finally got the opportunity to do what they love to do, which is make great games.

They’ve been working on Definitive Edition for quite a while now. They’re a distributed team across Europe and the U.S., so they always work different shifts. It’s been a real pleasure to work with group of people that are as passionate as RTS games and Age of Empires as I am.

Q: How did you approach this remaster?

We constantly asked ourselves: how do we capture the magic and feel of Age of Empires — and make sure we never lose sight of what made Age of Empires so great — but present the version that everyone remembers in their heads when the graphics were amazing because there was nothing else to compare it to?

Q: When Blizzard went back to remaster Starcraft, they didn’t touch the gameplay. You’ve taken a different approach, adding modern mechanics to the game. I imagine you had a lot of heated discussions deciding which features and mechanics to update and which ones to keep true to the original?

Isgreen: Starcraft was the third real-time strategy (RTS) game Blizzard created — they had already gone through two iterations of Warcraft and Starcraft went through multiple iterations before it came out. Starcraft is a wonderful game. It’s wonderfully balanced and it’s a classic RTS.

We had more of an advantage in that AoE was such an old game that there were mechanics that aren’t enjoyable anymore. 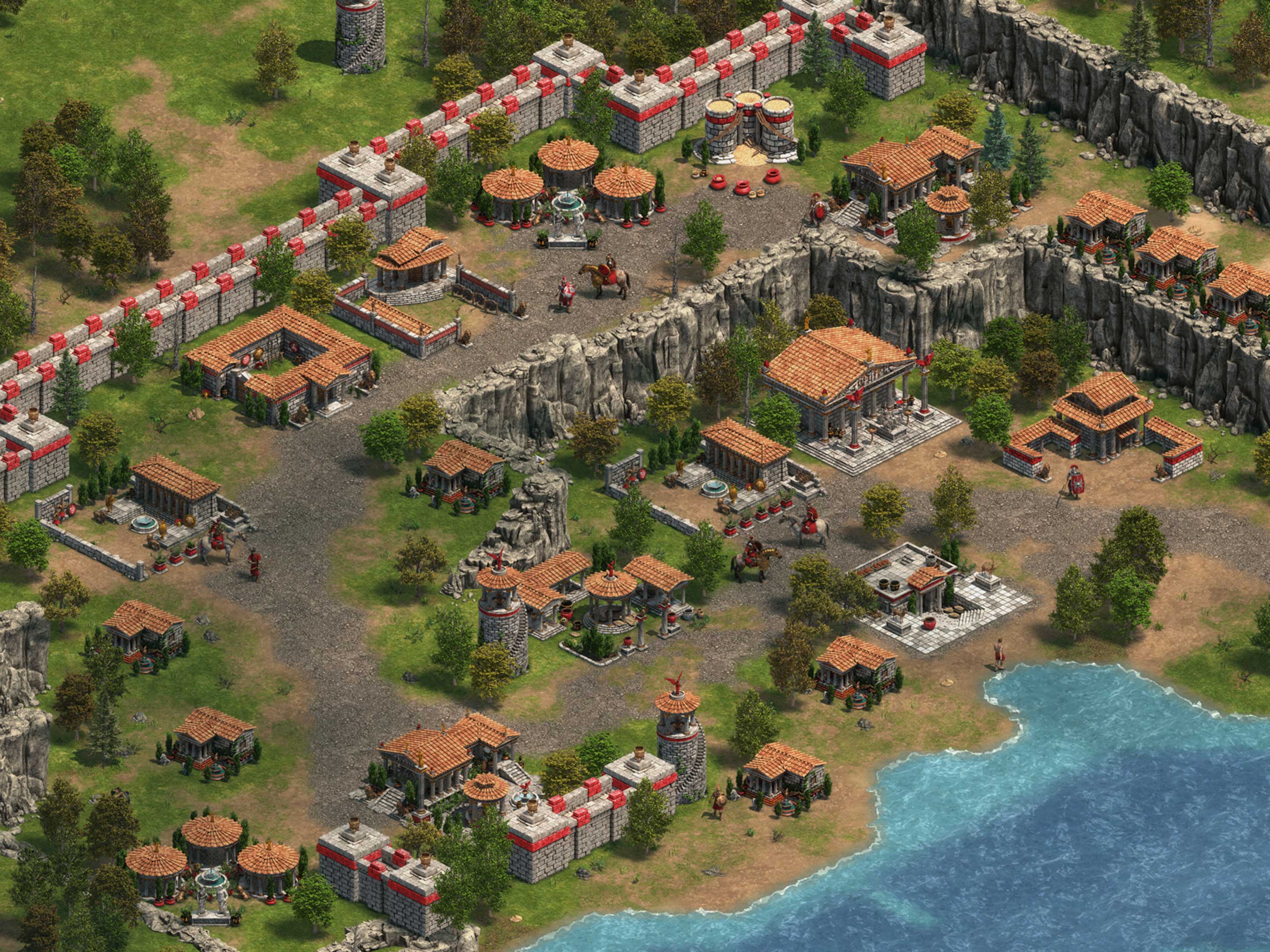 We did have a lot of discussions to determine what our line was. For example, you couldn’t queue units in the original Age of Empires. For every guy you built, you had to press the build button. No RTS game does that anymore.

We’re working on the Definitive Edition of the other Age games as well. Age of Empires 2 is a lot more sacred. We’re not messing a lot it terms of how it plays because Age 2 is so beloved and sacred to us. That to us is more like Starcraft. The advantage with AoE was that we had room to improve it in a way that wouldn’t hurt the original game. So we made those changes.

Q: What was the actual process of updating the game like? I imagine you faced a lot of technical challenges updating an old engine.

Isgreen: It was incredibly painful at points. Working with 20 year code is not fun. When Age of Empires was written, real-time strategy games were still in their infancy.

When we talk about path finding (how the units navigate the map), one of the classic ways to solve that problem is using a mathematical process called A*, most RTS games use in some form or another. That didn’t exist when Age of Empires was made.

The path finding system in AoE 1 was this completely muddled, crazy system that was so interlinked and hacked together with all the other functions of the game that our programmers were pulling out their hair out, asking “Why did they do it this way?”

So we made sure to modernize the game, make the units behave better — because one of the most stressful things when playing a RTS is when units don’t do what you tell them to do. We took a lot of time to make sure to fix and improve those things and that sometimes meant keeping and fixing the old systems and sometimes that meant replacing them with new systems.

We had to very careful about the decisions we made. Starting with the original code base allowed us to stay true to the original feel of the game.

Q: What was your takeaway the first time you booted up the original again?

Isgreen: That thing that stood out to me, as someone who has been RTS games for a long, long time, is that Age of Empires was just simple and fun.

The great thing about Age of Empires and it’s one of the reasons I think it’s as big as it is and people still love it today is that, as any genre gets long in the tooth in terms of being around in the game space, the games tend to get more complicated. First shooters were just shooters. Now they have RPG mechanics and all this other baggage.

The same happened with RTS games. The great thing about Age of Empires is that they’re just fun to play. The game doesn’t demand that you do crazy actions per minute (essentially a measure of how quickly you can play the game) — you can, but you don’t have to — you can just sit there with a big base, wall yourself in and win with a wonder. 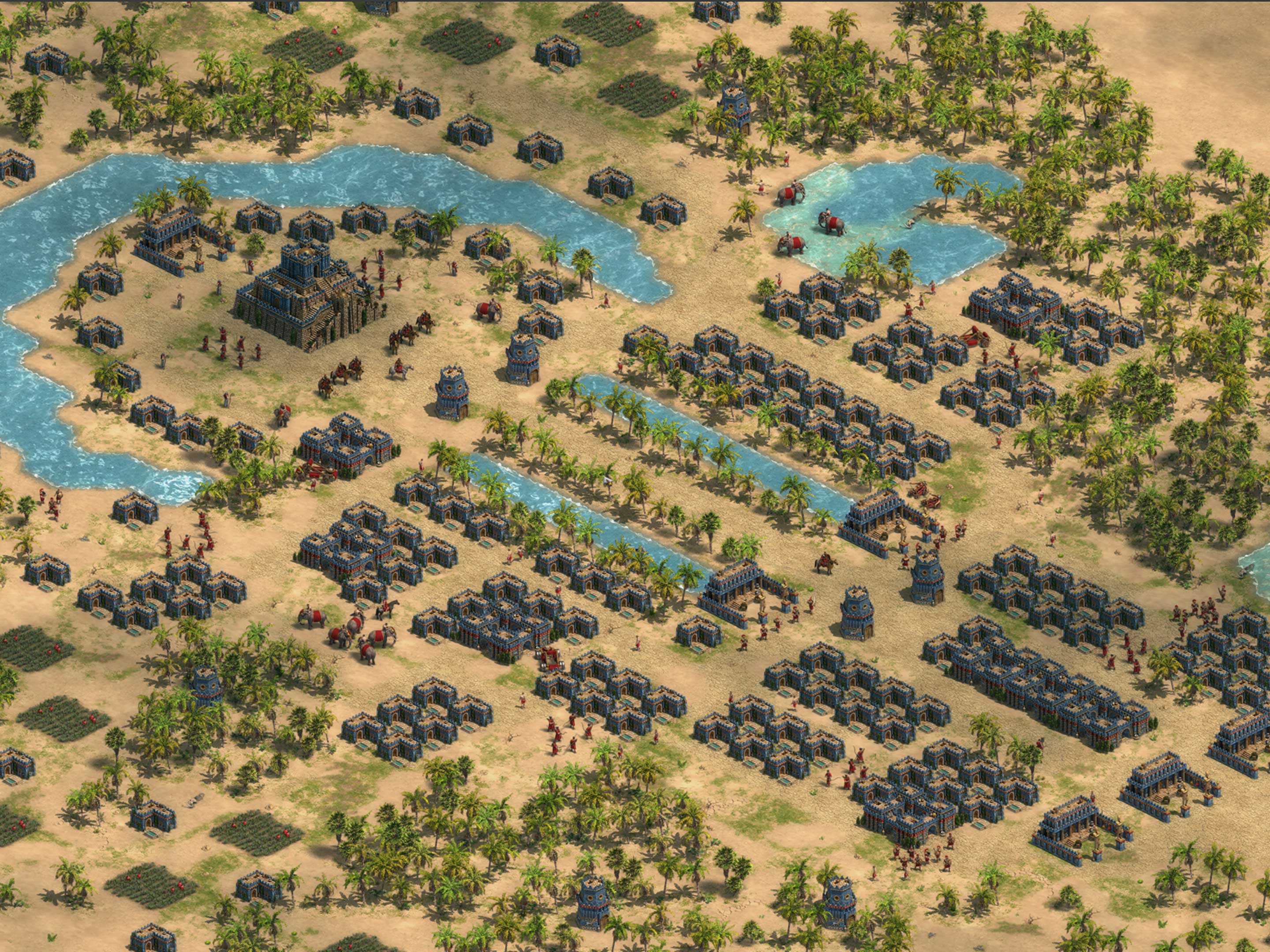 There’s this elegance to Age of Empires that I miss.

One of the brilliant things Ensemble (the franchise’s original developer) did with Age is that they gave you multiple ways to win, which was something that no RTS game had done at the time and I think that was an absolute wonderful thing to do, and just making it about history, because history is accessible.

I don’t have to explain to you what a club does, what a wheel does, what a bow does. Every human being has that built-in information of what those things do because they’ve grown up with history. Every other RTS you have to explain the units. It’s a magic that Age of Empires has had that’s made it so timeless.

Q: What do you hope players take away from this game?

For the people that have never played it before, so this is what Age of Empires is all about. This is cool. As we roll through doing the Definitive Editions of 2 and 3, and of course we’re working on 4, people can really feel oh many this series is cool.

This interview was edited for clarity and conciseness.