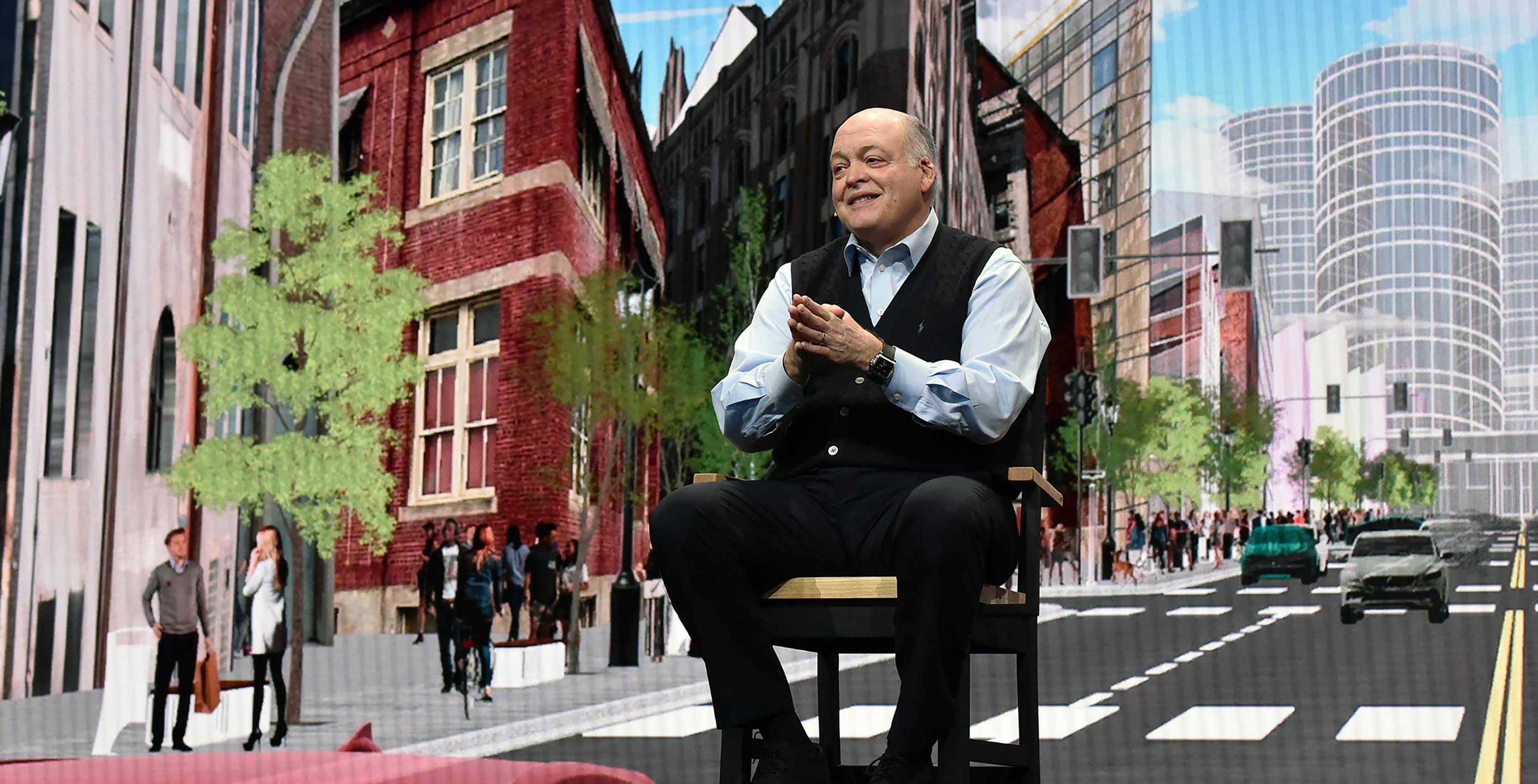 CES 2018 and the North American International Auto Show in Detroit are now over, but the implication is that Ford is making a big gamble. Putting itself in the unenviable role of trying to unite a fractious industry toward uniformity on an autonomous driving operating system, Ford is betting that its Transportation Mobility Cloud (TMC) will be the ticket.

Amidst all the talk of greater driving autonomy and the advent of 5G cellular, Ford is hinting at a total shift in priorities. CEO Jim Hackett didn’t explicitly say it, but he certainly implied that the company will need to focus on “transportation systems” rather than making more cars.

That’s almost like Apple saying it needs to focus on the way people communicate and consume content on the go, more than making iPhones. Hackett’s real point was that, while cars enabled freedom of movement, they restricted people through congestion, pollution and poor urban planning.

A systems-based approach essentially means that car ownership is going to matter less in the future. Lyft claims 240,000 of its passengers gave up their cars — and that’s only in the United States. The rideshare service entered Toronto in December 2017, but that didn’t figure into the report.

It’s not clear what similar impact Uber may have had, given its much wider reach, but it’s hardly surprising that automakers like Ford want to be on the right side of history on this one. 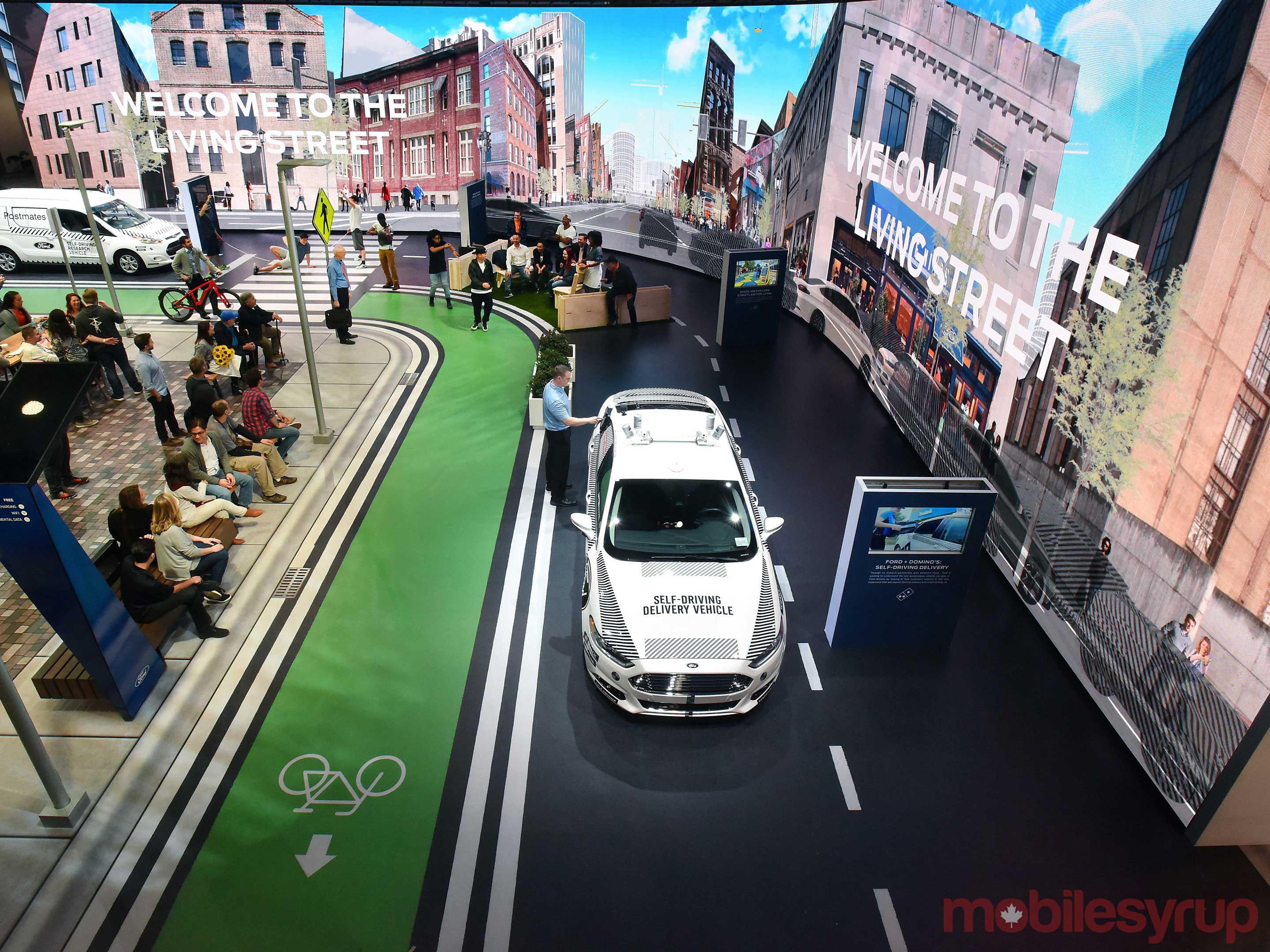 The auto industry is known for its sense of order, except the consensus has usually been forced upon it, either through regulation, liability or consumer demand. Getting all the automakers to agree on something as monumental as a self-driving OS is lofty, to say the least.

Nevertheless, Ford is giving it a go. The TMC is an initiative converging from a few different fronts. It teamed up with Qualcomm to adopt the Cellular Vehicle-to-Everything (C-V2X) platform that will be driven by 5G connectivity. It has partnered with Domino’s Pizza, Lyft and Postmates to trial self-driving cars that work within their respective businesses.

Then, there is the collaboration with a company called Autonomic, a vendor helping build out TMC. Other partners will be needed to pull off what is an otherwise idyllic vision.

More people living and working in cities, yet fewer cars. More free-flowing traffic with less parking. Vehicles driving themselves and speaking the same language to navigate roads with precision.

Where cities have felt handcuffed in finding relief to never-ending gridlock, TMC and C-V2X imagine a future where transport is efficient everywhere. With a growing population, it’s a little like swimming upstream. How would this work? 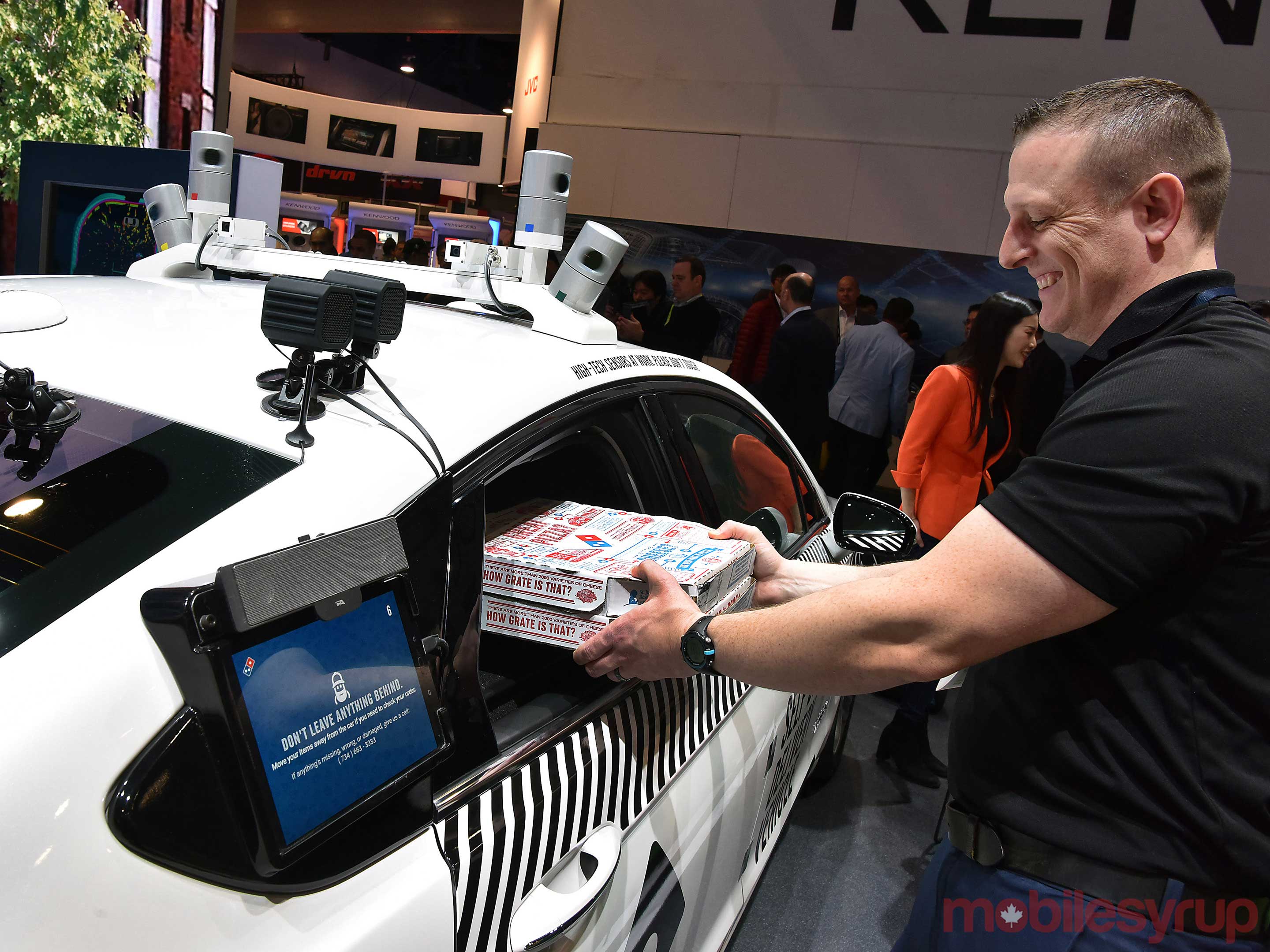 Migration to cities shows little sign of abating. The United Nations projects 66 per cent of the world’s population will live in urban areas by 2050. In the U.S., the average American spent 16 hours in traffic 30 years ago. Today, that number is 38.

“City administrators are looking for unique ways to basically address that through advanced hybrid technology — the ability to create geo-fences for hybrid electric vehicles to go into electric-only mode when inside a certain geo-fence. That’s something that’s of very much interest to those cities,” says Sunny Madra, CEO of Autonomic, in an interview with MobileSyrup.

Ford’s approach is designed to be open-source, but will everyone else see it that way? Madra confirms the automaker is going ahead with its plans, even if no else bites.

Some may be on a similar page, but with different goals. Samsung has indicated a willingness to adopt C-V2X because of its reliance on 5G, except its driving initiatives feel like an attempt to stick to a walled garden, however realistic that may be.

That sort of thing matters because the vision involves vendors from a variety of industries, plus government legislators and regulators. Madra believes Ford is “doing it at such a large scale that it will help kind of pull others into the platform because that commitment has already been made.” He cites Amazon as an example, noting that its Web Services platform became a cloud computing behemoth.

“To deliver the vision of smart cities, we really need to be able to exercise the other modes of V2X. X stands for not just vehicle-to-vehicle, but vehicle-to-infrastructure, vehicle-to-pedestrians and vehicle-to-network,” says Jovan Zagajac, Ford’s technology manager, in an interview with MobileSyrup. “It is very likely those will have many elements of a cellular solution. We want to stay very close to that ecosystem.”

Zagajac is referring to the way autonomy and connectivity are hurtling toward each other. Currently, smartphones act as the primary conduits in delivering the content drivers and passengers consume. That’s already sobering, considering vehicles increasingly have their own infotainment systems and Wi-Fi hotspots. Apple’s CarPlay and Google’s Android Auto exemplify that further, since those too run off mobile devices, too.

What’s interesting is that TMC will apparently work with vehicles running Ford’s Sync 3 infotainment system. Backward-compatibility is rare in automotive circles, but Qualcomm has already indicated that any C-V2X rollout will have to begin with 4G LTE first. 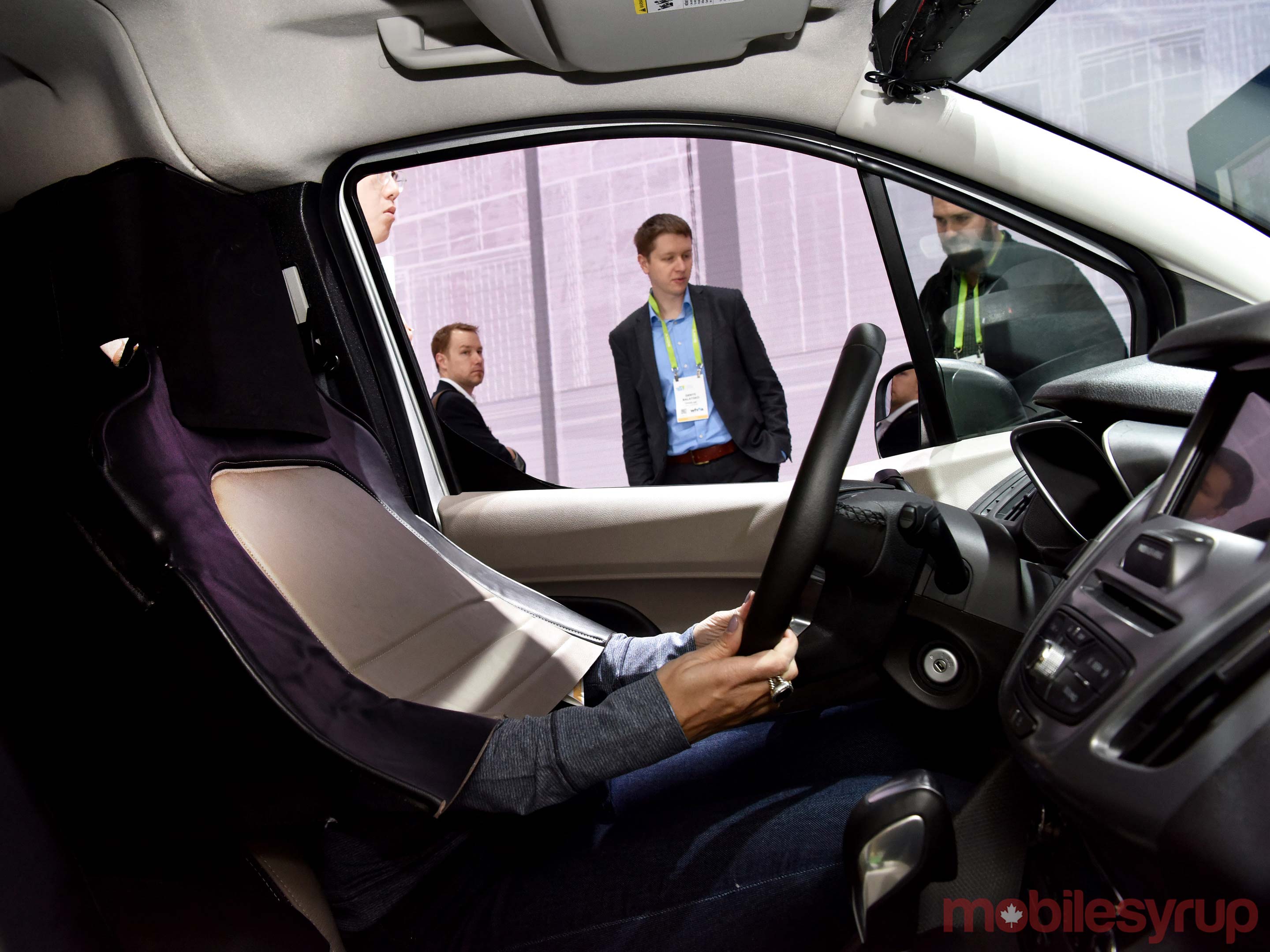 The thing about shows like CES is they envision utopic convergences. Would some of the concepts shown by Samsung, Panasonic, Toyota, Kia, and others pass regulatory safety hurdles? And if so, when?

Thinking differently about driving is central to what Ford, Qualcomm and others are trying to do. The car becomes the mobile device. It has the connectivity to stream video and audio in really high resolutions. Virtual meetings done through VR while the car is moving or not — which sounds insane by today’s standards. Only 5G bandwidth with lower latency, plus a decidedly efficient autonomous infrastructure will make both these things possible.

And, of course, they would have to pass the sniff test from bureaucrats.

“We have work to do with regulators to ensure the tech can be deployed. The current regulatory environment wouldn’t permit us to deploy this technology the way we would like to,” admits Jagavac. “We are very encouraged and thankful to the regulators for their willingness to listen, and are constantly keeping them informed about the progress we are making in testing.”

The truth is, connectivity has always been an afterthought to the auto industry. This recent wave in developing autonomous technology and electric power has forced a rethink. Automakers will have to view it more like carriers, phone manufacturers and app developers have.

“We got burned when we had to switch from 2G to 3G and then on to LTE. Now we have to think of 5G, so we’re kind of getting sharper and smarter in how we’re designing our cars,” says Jagavac. “In the long run, whether it’s 5G or some other ‘G,’ we’ll be able to provide those services without having you buy a new car.”

He wouldn’t say whether that would mean vehicles will also become more modular over time, at least when it comes to the dashboard.

Madra is fairly aggressive in projecting that “hundreds of thousands” of Level 5-capable autonomous vehicles will travel on roads by 2021. Ford has remained committed to releasing an self-driving car without a steering wheel by 2020.

Releasing it is one thing, but without the umbrella of connectivity and regulations to support its operation, the impact is still highly speculative. The mentality shift underway in the industry does at least signify automakers know car ownership is going to change dramatically in the years to come.

Ford has already gone all-in on its Chariot ride-sharing service currently operating in a handful of U.S. cities. It’s set to expand further this year.

So, while it continues on its own initiatives, Ford is hoping to draw in everyone else to adopt C-V2X and 5G as industry standards. The company’s previous attempt at unanimity with the SmartDeviceLink infotainment and telematics platform fell flat. It won’t be long until we see how this effort bears out.

Tesla Premium Connectivity trial to end in Canada in May, subscriptions to cost $13.99 CAD/month