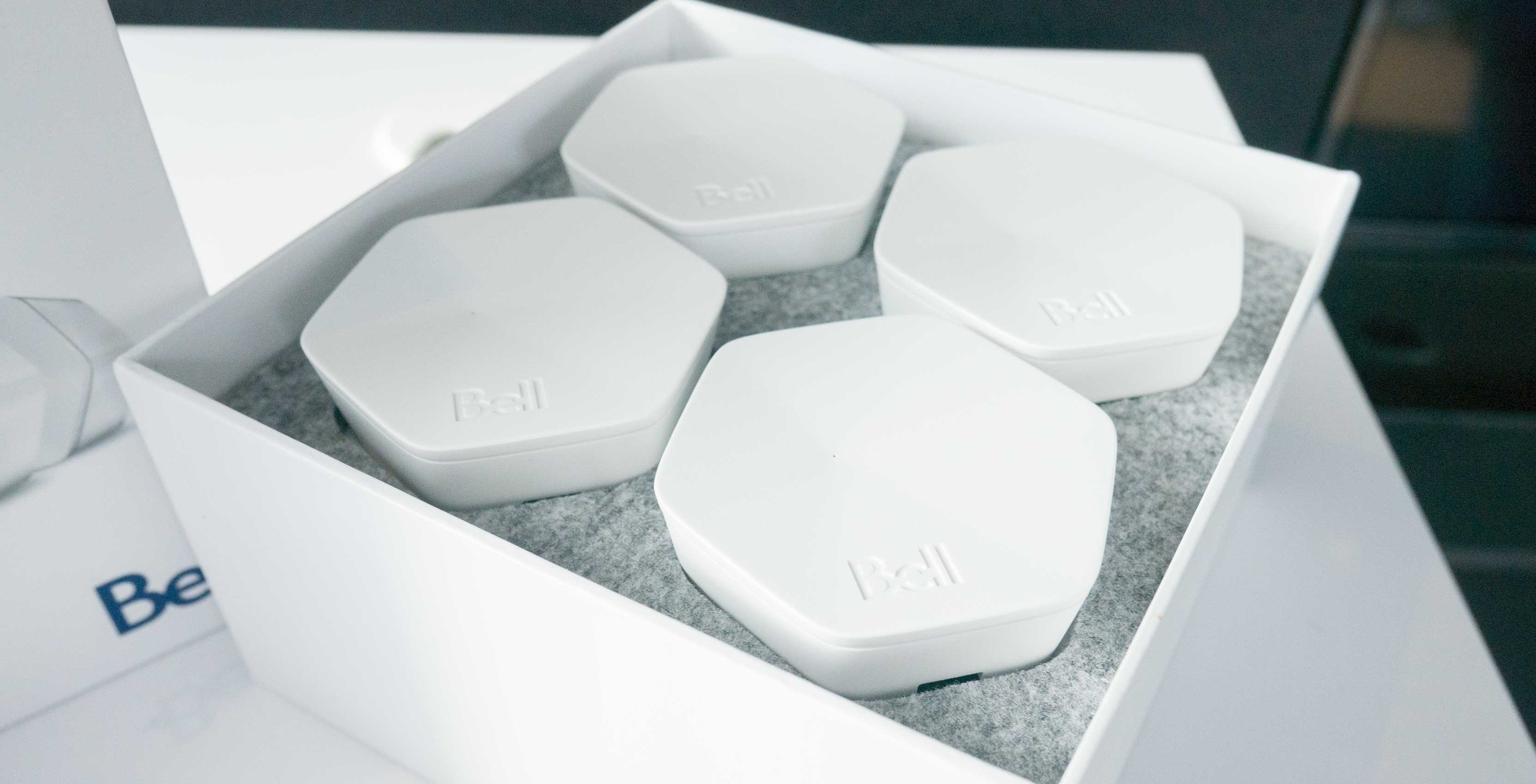 The official launch follows a quiet roll-out that began in September 2017. It is currently active in thousands of homes in Ontario and Quebec, and will hit Bell’s Manitoba and Atlantic footprint later this year.

As with any mesh network, the pods that come with Bell Whole Home Wi-Fi connect to each other and the modem to provide a more reliable and comprehensive web of connectivity across the home. Unlike mesh networks from companies like Google or Eero, however, Bell provides both the mesh network access points and the modem — providing opportunity for a more seamless experience.

“We’ve integrated the same software into the modem so that it’s no different from the pod itself,” said Shawn Omstead, vice-president of residential product development and management at Bell Canada in an interview with MobileSyrup.

This cuts ethernet cords out of the equation. Though there is an available ethernet port on the pods, customers won’t need to connect any of the pods to the modem. The pods can just be plugged in to the wall and set up through a few steps on the Bell app.

Through the app, users can see the signal strength of the pods and modem, as well as how many devices are connected to each access point, represented by small dots orbiting around each point. 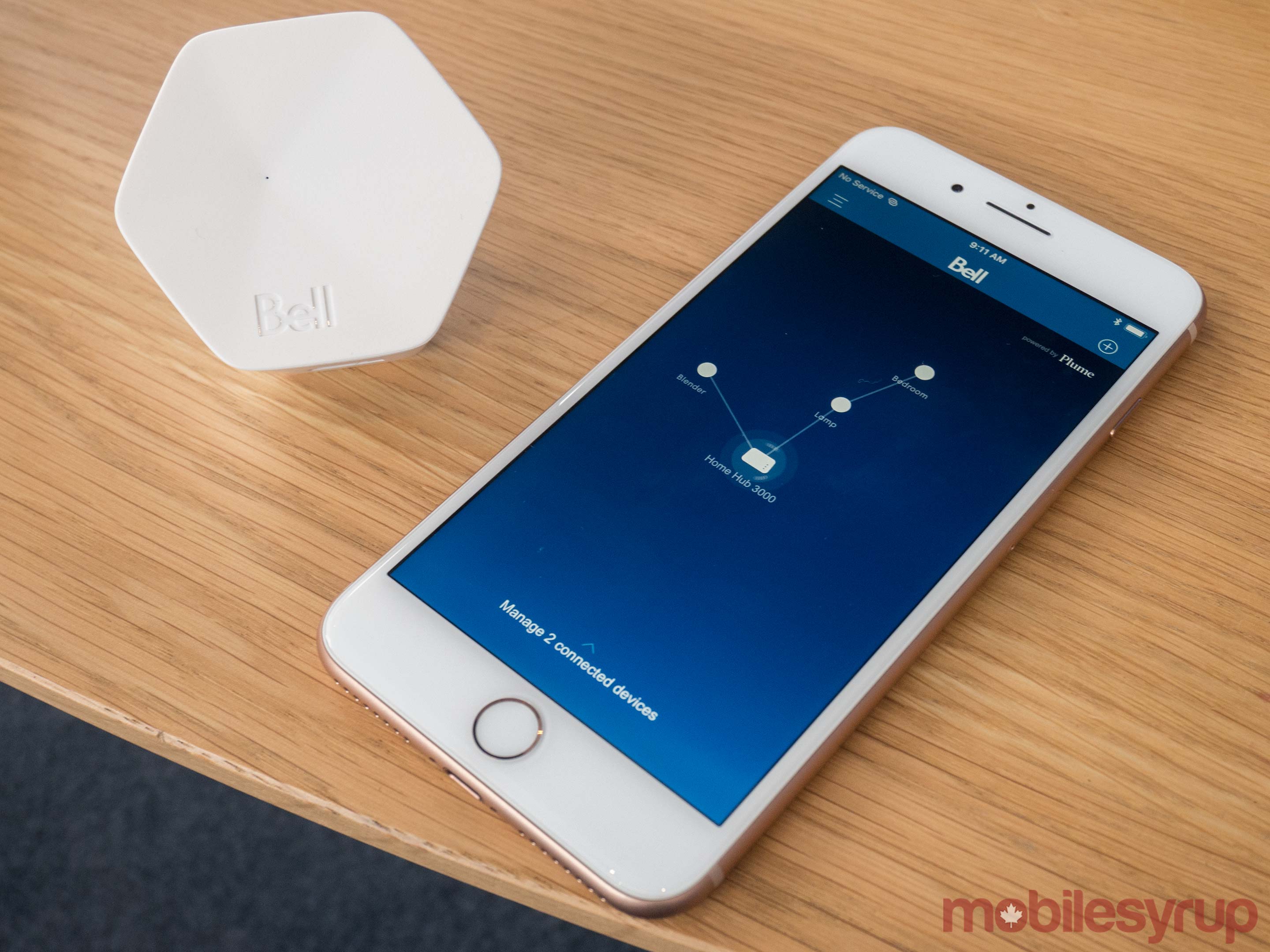 There’s also a section that lists all the devices on the network. Clicking on a particular device gives you parental control options, allowing the administrator of that account to block access for certain devices for certain amounts of time or recurring daily time periods.

Additionally, the app allows users to message Wi-Fi network name and password to guests, and Bell says more features will be added in the second or third quarter of this year.

The pods themselves are unobtrusive; they’re white, have no blinking lights (after setup) and are small enough not to block the other outlet on either side of the device. 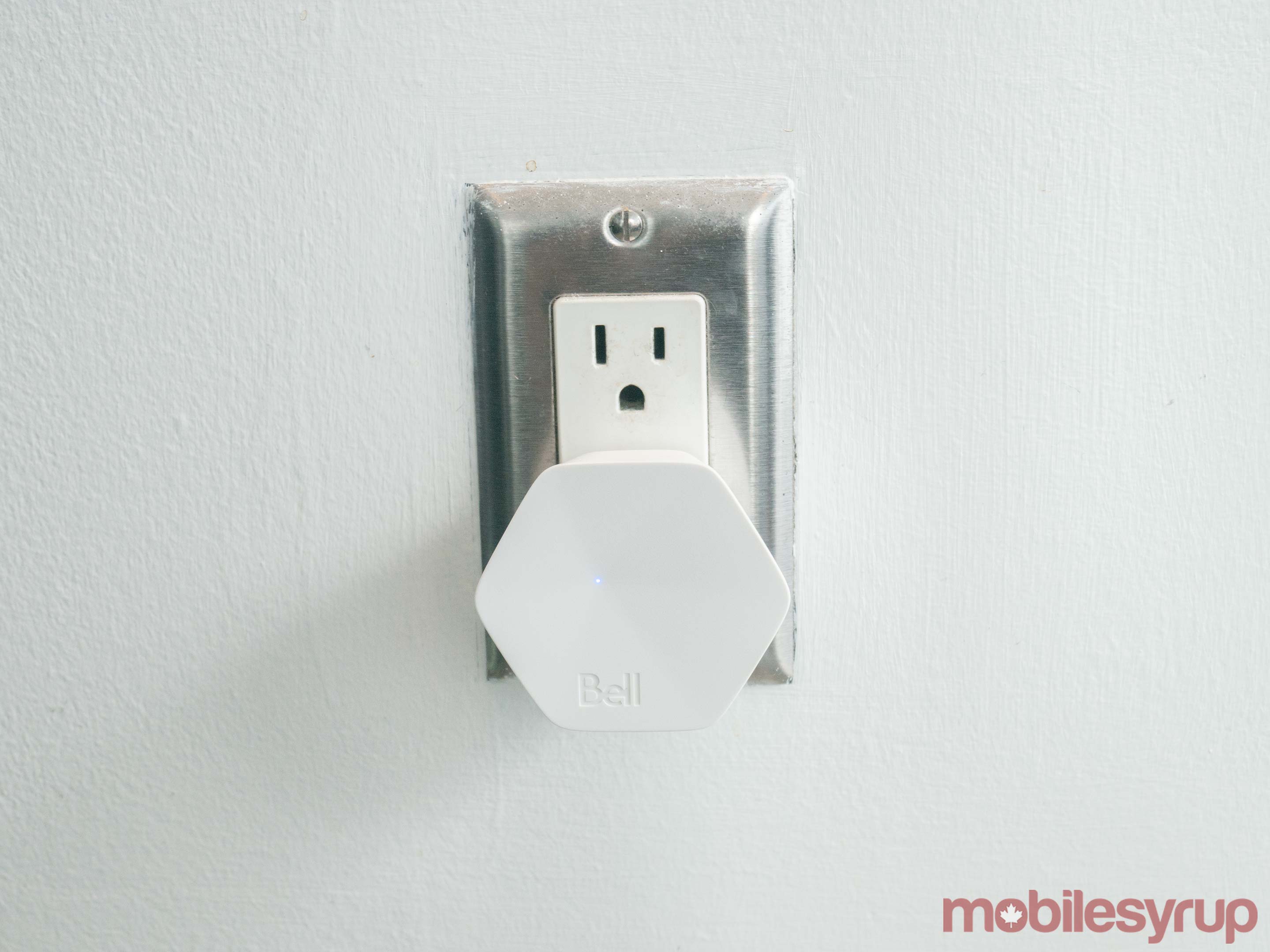 As for customers that need more than four pods — they can rent an additional pod for $2 per month, up to a total of 14 pods.

The pods aren’t available for outright purchase yet, however. In fact, no Bell internet hardware can be purchased, but there are options on some modem routers to make one payment rather than monthly payments. That option may come in the future though, says Omstead, with the price likely mirroring what Plume charges for its sets. 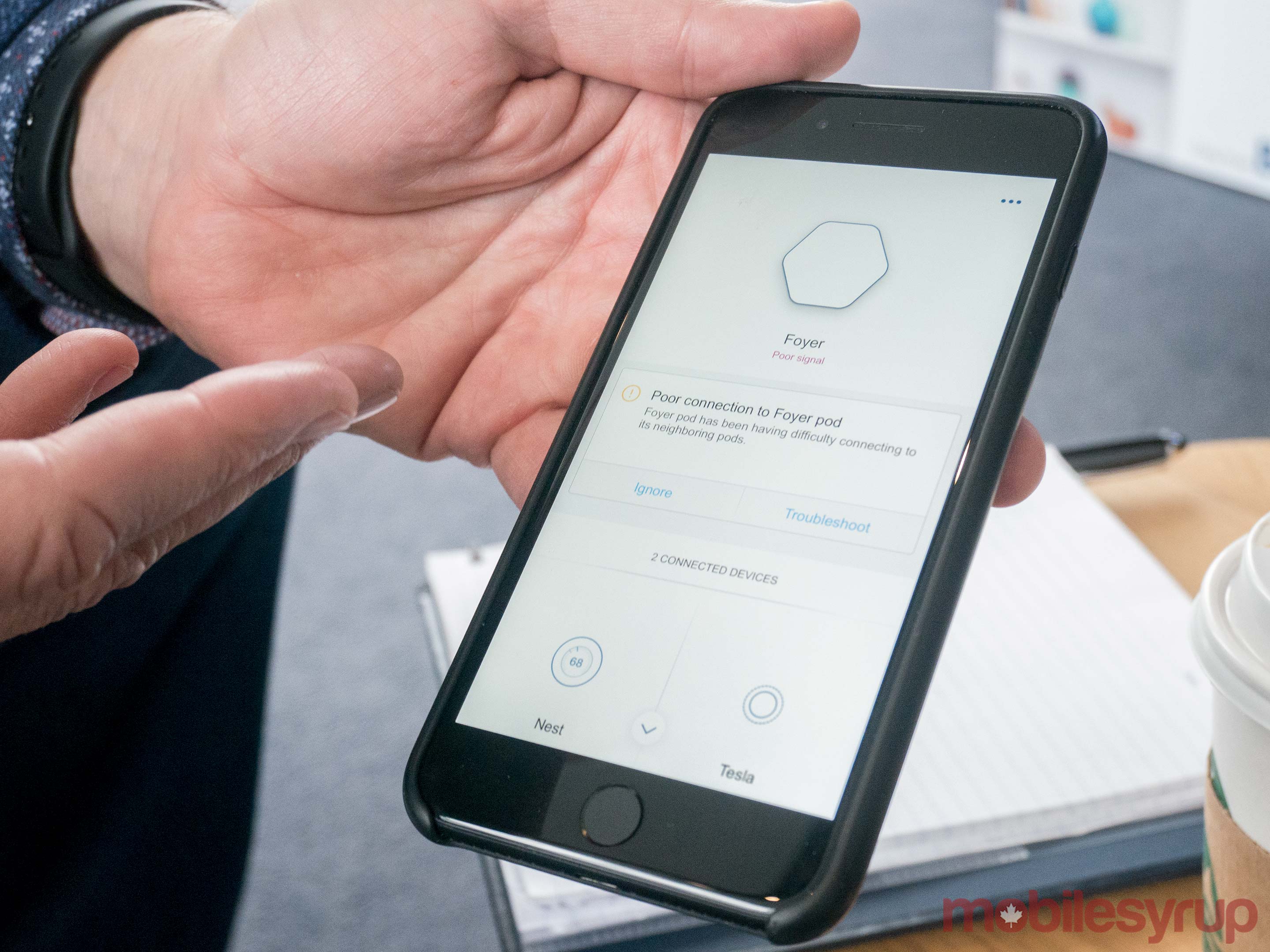 The outright price of a six-pack directly from Plume is $329 USD, just about the equivalent of three years’ rental of six pods.

Beyond the convenience of the app and the obvious benefits of mesh network coverage, Omstead emphasizes the importance of cloud intelligence, noting that the pods and modem are able to easily switch between 2.4GHz and 5GHz connections, implementing whichever is best according to scenario.

For instance, when you approach and enter your home, you naturally pick up the long-range, lower speed band — 2.4GHz — which, with some systems, leads to the issue of being stuck on 2.4GHz even after you’re well ensconced in your home. But Omstead promises that with Whole Home Wi-Fi’s cloud technology, the network will quickly bounce you to the faster short-range band — 5GHz — once you’re inside your home. 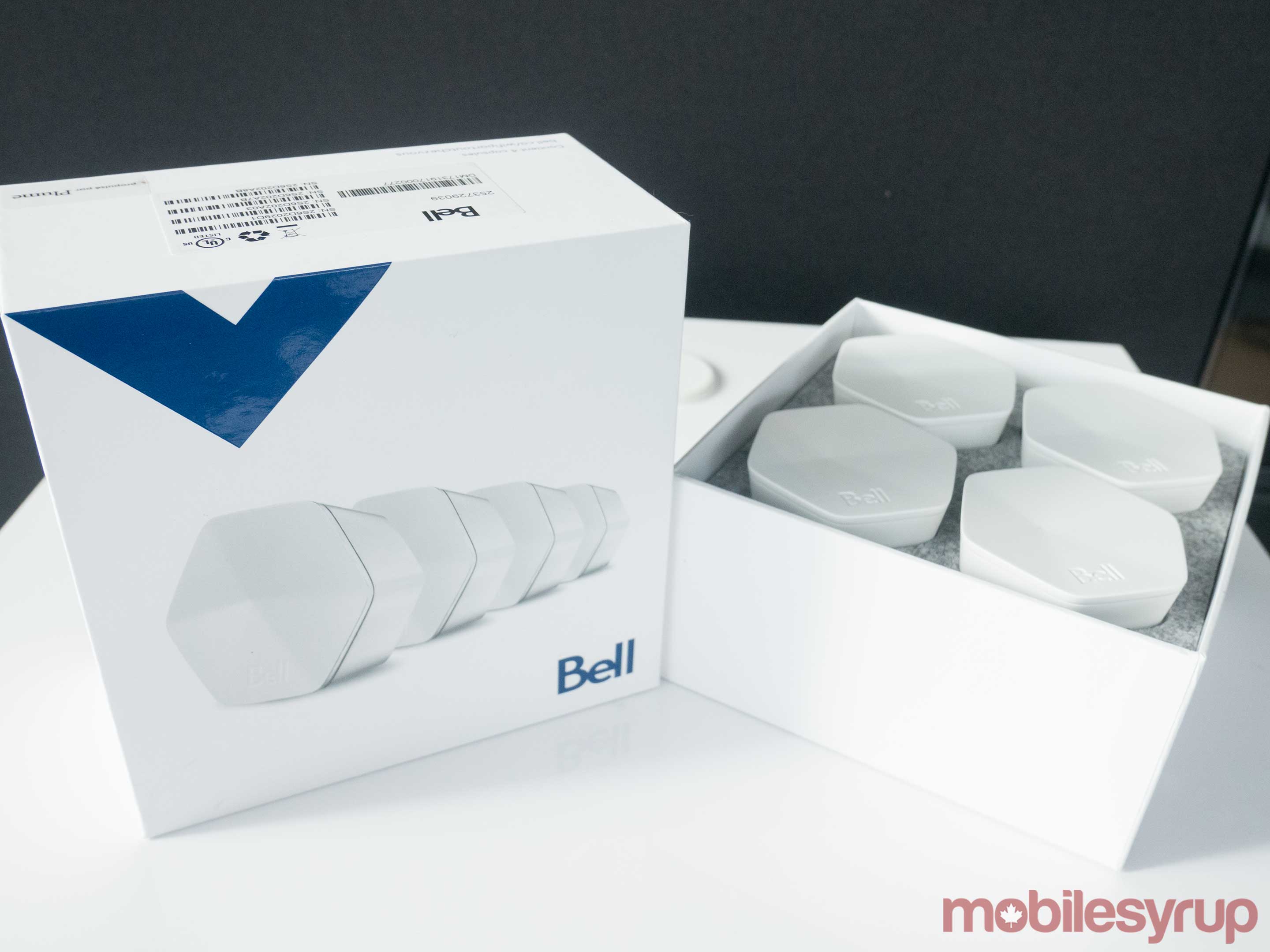 He also notes that Bell’s cloud-based technology will learn to prioritize certain traffic. For instance if your iPhone is consuming a lot of bandwidth, it will give it priority over devices that are inactive or less active.

“We are constantly learning and adapting every time,” says Omstead.

Meanwhile, options for manual prioritization are also on the way, likely to arrive by the end of the year.

Omstead says he’s confident this mix of mesh networking and cloud intelligence is the next major step for Bell’s Wi-Fi offerings and home Wi-Fi in general.

“For 99 percent of customers, this is going to be the perfect solution.”