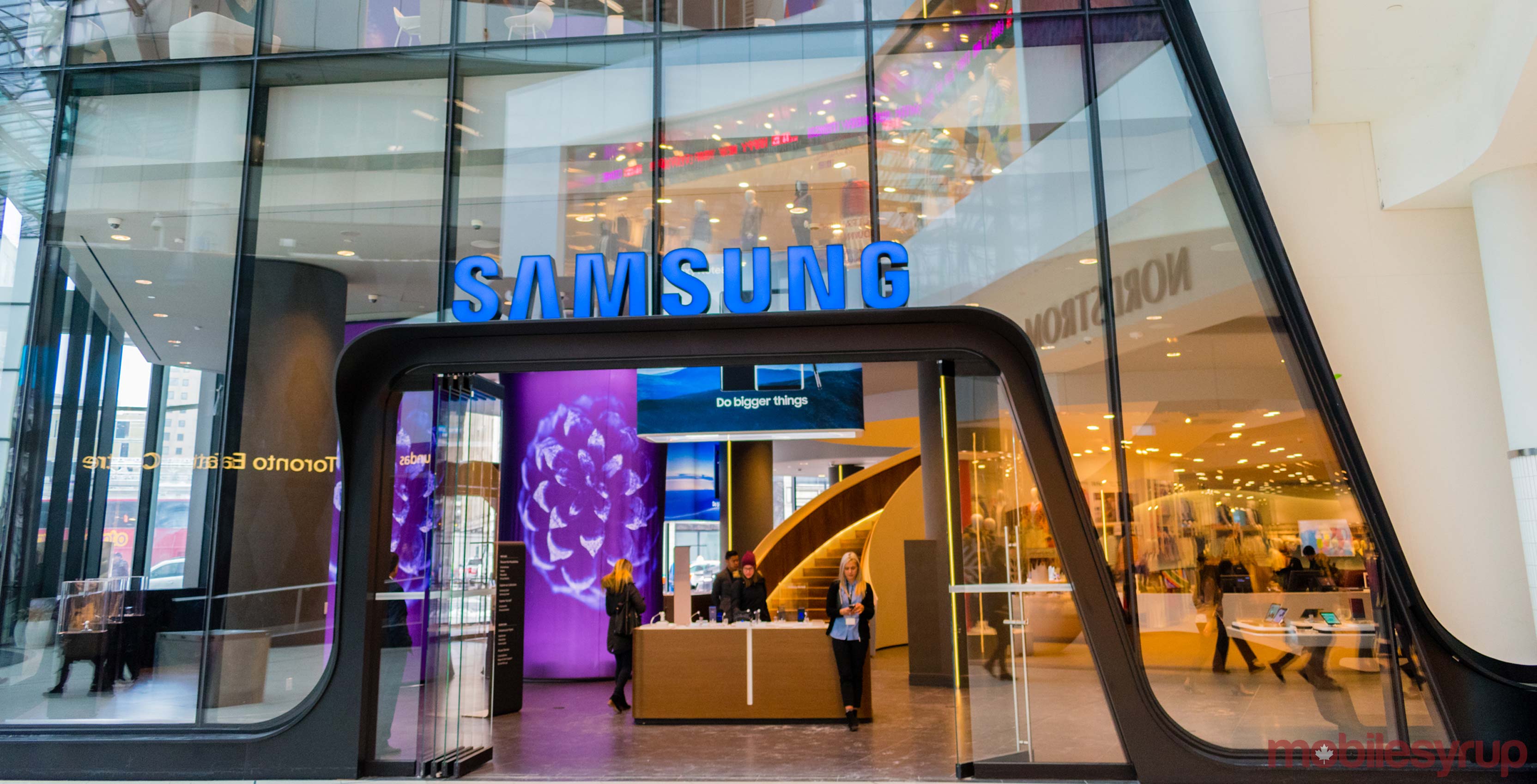 Samsung might be one of the world’s largest device manufacturers — to say nothing of their efforts in the home electronics and appliances space — but it’s only recently that opinion has shifted regarding the company’s mobile design.

When the company first entered the smartphone space with the Galaxy S Android smartphone, Samsung’s mobile devices were defined by their reliance on plastic materials and brushed chrome accoutrements. In contrast to the stainless steel and aluminum used in the South Korean conglomerate’s washing machines, televisions, speakers, laptops and fridges, Samsung’s line of smartphones and tablets looked like products out of an older era of tech design.

Of course, all of that changed with the Samsung Galaxy S6. Gone was the company’s monochromatic plastic motif, instead replaced with real metal, curved glass and gorgeous colours.

The Galaxy S6 Edge and S6 Edge+ took this renewed design philosophy one step further, with screens that gently curved and opened up the display to give users the illusion of a seemingly endless screen.

When the Galaxy S7, S7 Edge and gorgeous Note 7 continued pushing Samsung’s glass and metal motif further, the company fully shrugged off its plastic past, ushering in an age of beautiful Samsung devices — and stunning Samsung mobile design.

With the company’s new flagship store in Toronto’s Eaton Centre, Samsung is now looking to bring its postmodern design to the heart of Toronto’s shopping core.

It’s Samsung’s way of affirming its position as a tech leader, but also as a design leader.

Two storeys and a stunning staircase 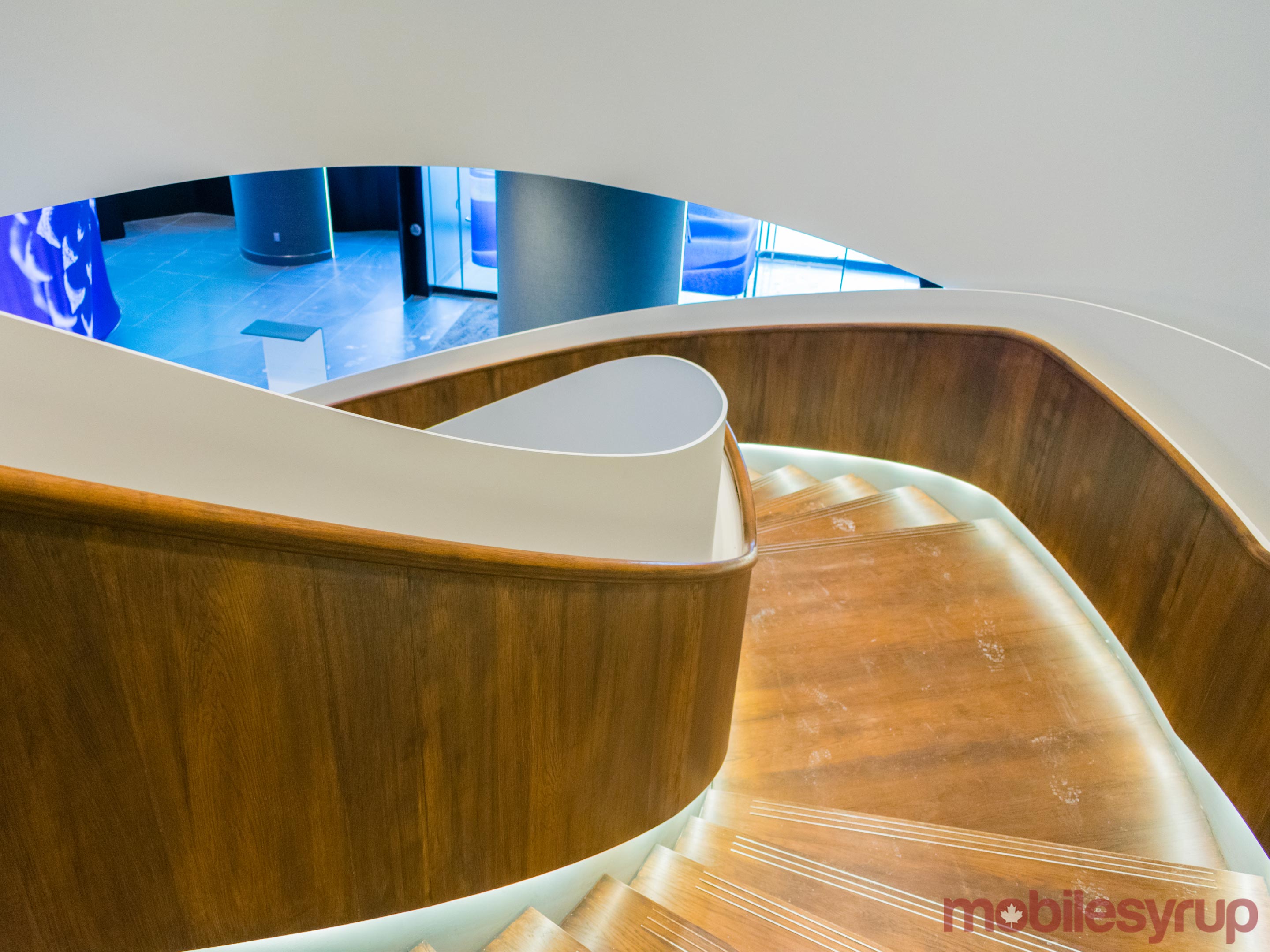 Walk into the 21,000-square foot Samsung Experience Store in Toronto’s Eaton Centre, and your eyes aren’t drawn to the tables of Samsung smartphones, tablets, smartwatches and virtual reality headsets.

Instead, your eyes immediately drift to a stunning curved staircase in the centre of the store itself. It’s a behemoth made of eggshell white walls and brown hardwood flooring that twists and turns to compliment the store’s monochromatic interior. 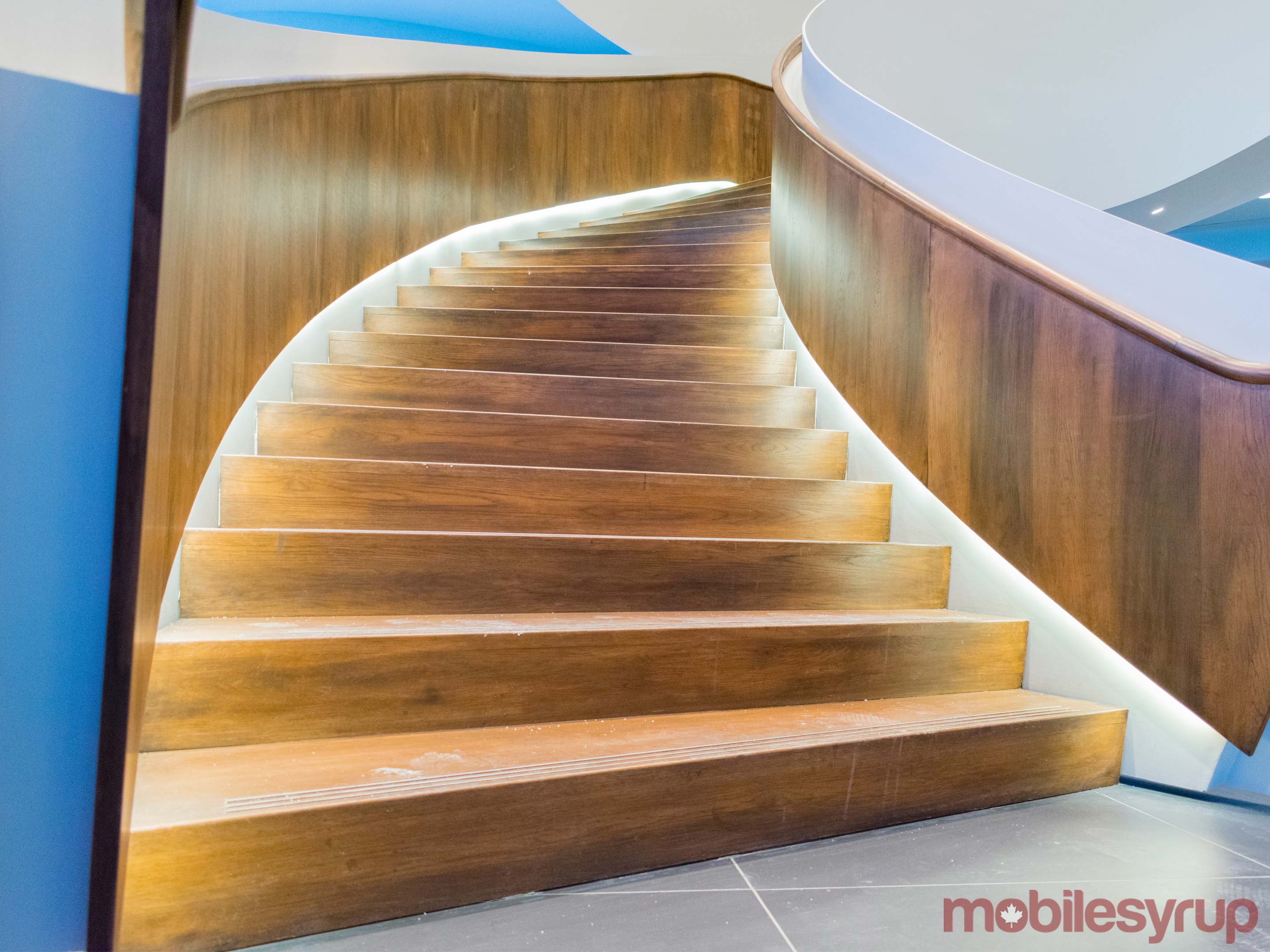 David Moisey is the director of retail marketing at Samsung Electronics Canada. According to Moisey, the staircase shipped in seven individual pieces and had to be welded onsite.

“We had to cut this huge hole in the floor, because they were separate decks,” said Moisey.

Of course, the 65,000-pound staircase is an attractive fixture in an attractive store, but its curves do more than just give it an appealing appearance — it’s meant to accentuate Samsung’s product design philosophy.

Moisey said that the whole store is designed with curves in mind. In fact, the firm in charge of designing the store — Quadrangle based in Toronto — were specifically told to look to Samsung’s product line for inspiration.

“So the beautiful curves that we notice both on our smart devices, on our [televisions] and appliances really inspired them for the approach to the store,” said Moisey. “And I think we pretty much said we don’t want to find a straight line inside the store.”

Moisey isn’t joking either. Apart from its products — and product boxes — almost everything in the Samsung store curves in some way. 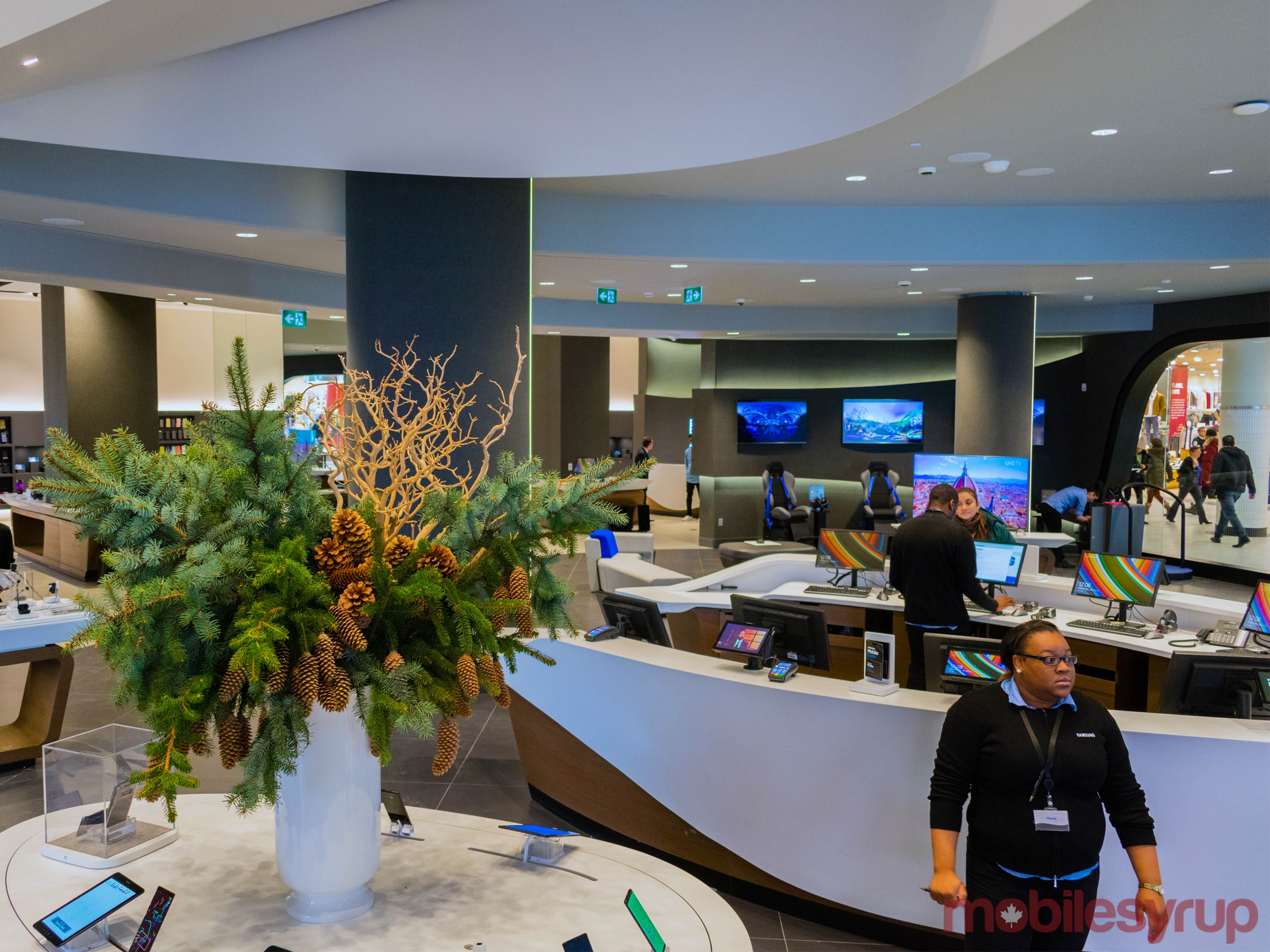 The walls, the tables, the chairs, the stools — even the customer service stations — all curve in a gentle, approachable way that’s both fluid and contemporary.

“So if we could approach that and create this continuous movement throughout the store that is also reminiscent of what’s on the product, that would be a cue that people would be unfamiliar with in terms of a retail setting,” said Moisey. “That’s [why] all the fixtures have these curves to them, the walls have curves, the outside porticos do, the ceiling does the same sort of thing.”

Moisey also explained that the store’s monochromatic colour palette — when contrasted with wooden accents — “makes it interesting and unique to us.”

Additionally, the store’s walls are made of a soft grey fabric, while tables, chairs and other key elements are white. Some pillows are Samsung’s specific shade of blue, but that monochromatic theme is present throughout the entire store.

Educational programming and the power of local art 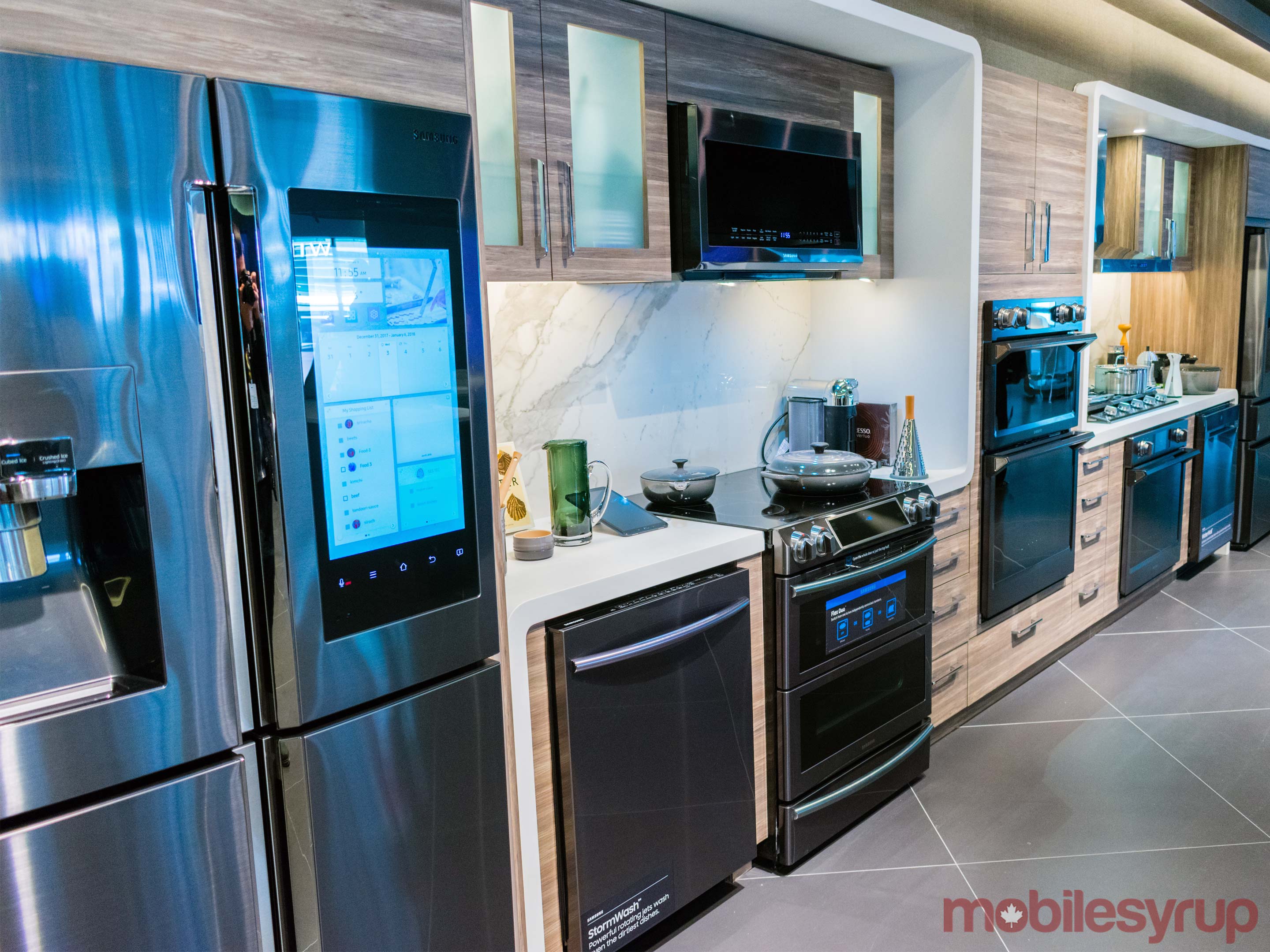 While no one from Samsung outright called the Eaton Centre location the company’s flagship Canadian store, this particular retail outlet is designed to offer a different experience than any other Samsung store in the country.

It goes without saying that the store is more distinctly designed than any other Samsung retail location, but the Eaton Centre also offers customers the opportunity to engage with the full range of the so-called Samsung experience. 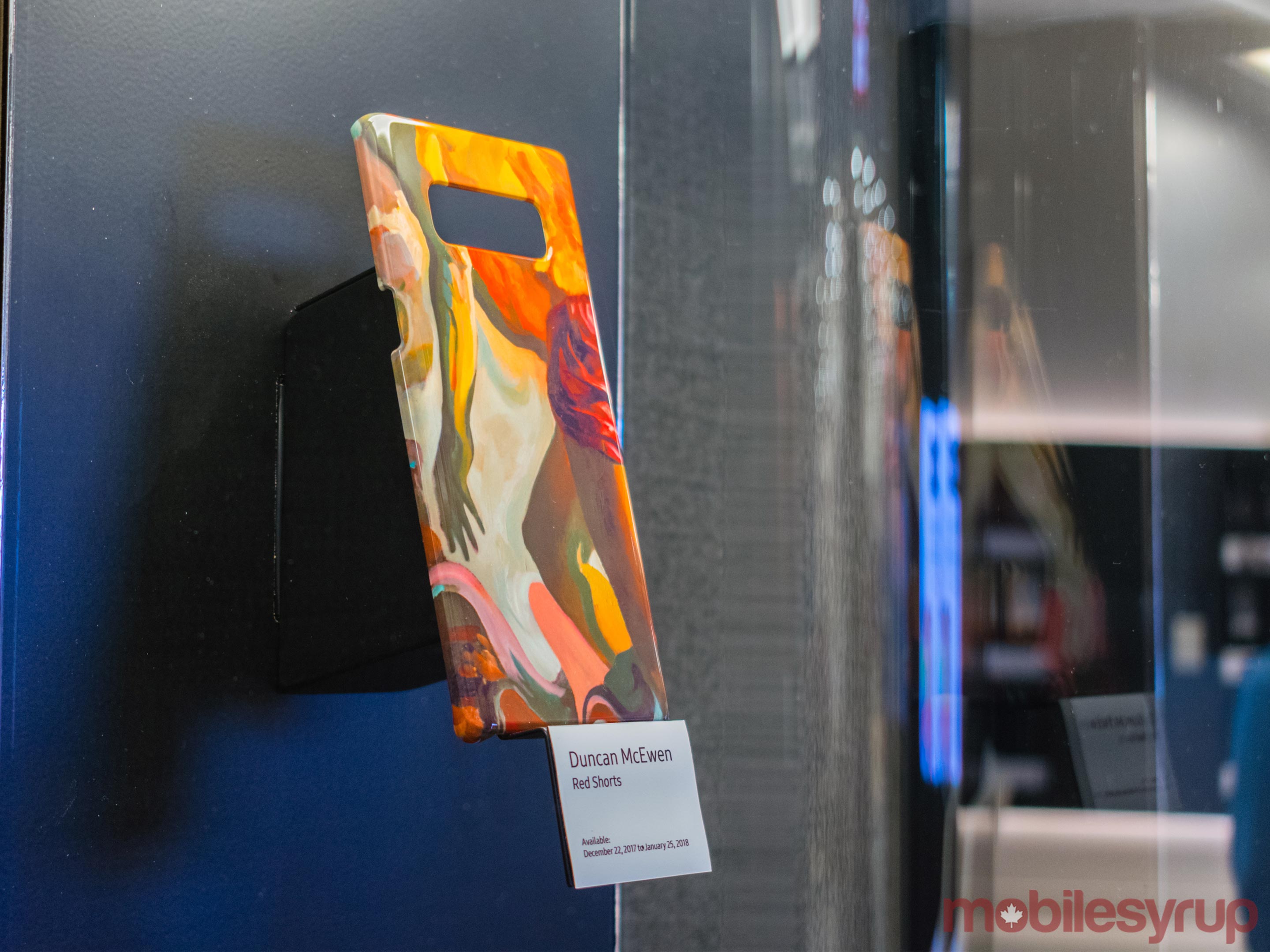 The company has also established partnerships with OCAD University and George Brown College to offer special programming and art promotions.

“We’ve been working with students and artists from OCAD and George Brown, so each month we have different artists showcased and you can select from those specific artists to have something truly unique on your [phone] case,” said Patricia Heath, Samsung Electronics Canada’s vice president of retail excellence.

“We will be cooking food in the kitchen and having people taste,” said Heath. “So this is what you can cook. This is really another level of experience.” 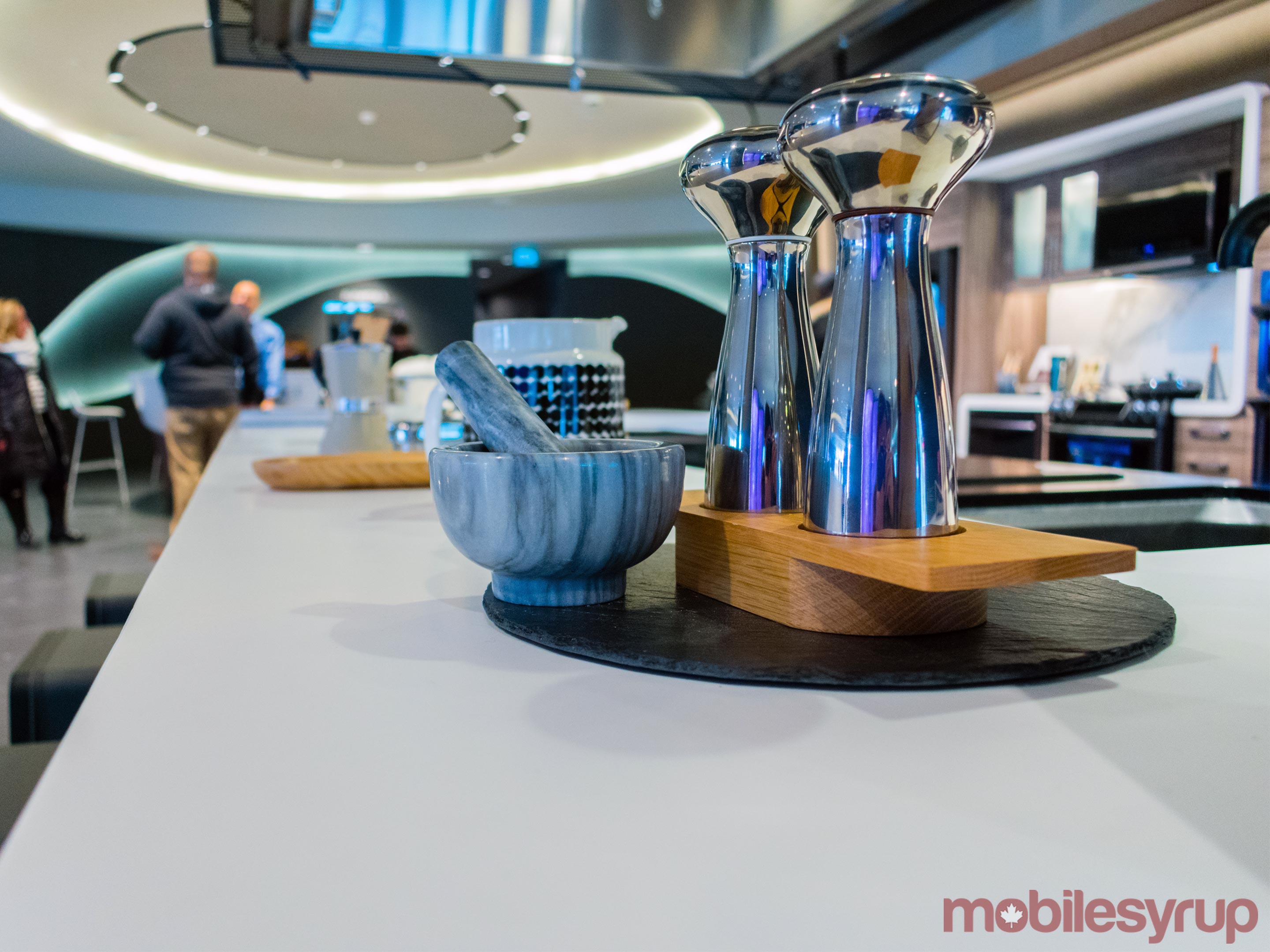 The store will also offer educational classes aimed at maximizing the use of Samsung’s product line-up — hosted by local artists.

If users want to figure out how to take the best photos with their Samsung smartphones, they’ll be able to learn from people like photographer Taha Muharuma, designer Andrew Watch and journalist Amber MacArthur. 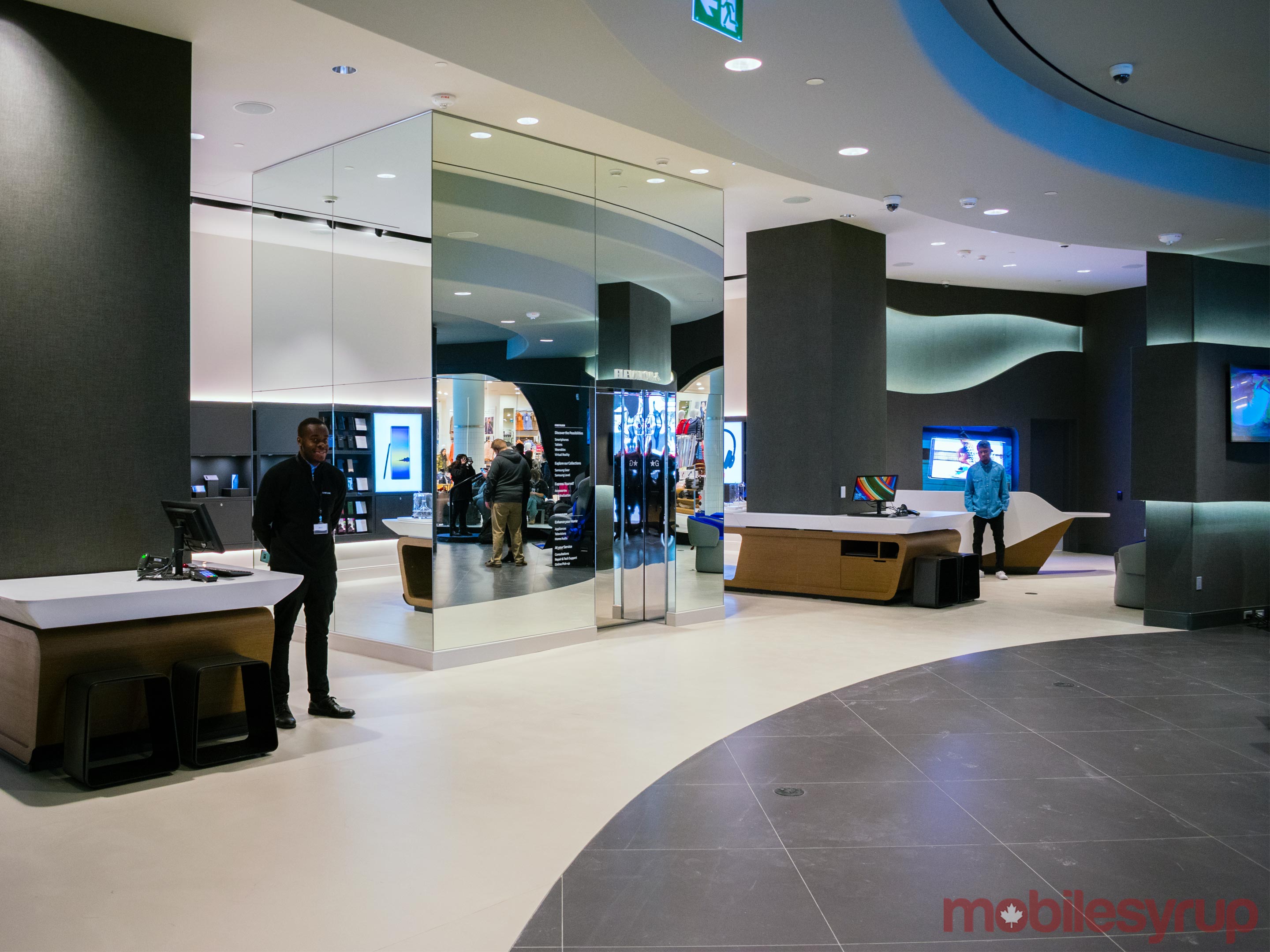 To Heath, Moisey and the rest of Samsung Canada, the Eaton Centre store isn’t just an example of Samsung’s current product offerings, it’s a location that’s meant to last the seismic shifts that often resonate throughout the tech industry.

And that’s a good thing, especially as modern technology continues to undergo rapid shifts in usability, access and, of course, design.