In the market for an underwater drone that is also “a robot pet full of emotions”?

Well, have I got the bionic robofish for you. Its name is BIKI (pronounced ‘beaky’) and it features a 4K UHD camera and it’s able to reach a depth of 196 feet.

The little black and white robot fish has a “bionic caudal fin” that can propel it to speeds of 1.12 mph and looks to be about the size of an American football.

It can be piloted via smartphone or remote and the creators, who are currently raising funds for BIKI on Kickstarter, promise that “with the bionic design, it won’t spook any marine life,” meaning you could get a close-up glimpse of fish doing secret fish stuff.

The camera also provides the opportunity to film or stream friends in the pool or just capture underwater landscapes, with a built-in stabilizer, 150-degree wide-angle lens, forward-facing lights and 32GB of internal storage.

BIKI also has built-in obstacle avoidance, so that it can navigate its own way around a pool, or users can setup their own route through the app. When it’s running low on power, the drone heads back to the surface. Though the company behind BIKI doesn’t explicitly state its battery’s spec, it promises 90 to 120 minutes of life.

As for “full of emotions” — presumably that refers to how the user feels upon seeing the underwater drone which is admittedly pretty adorable.

While I certainly can’t say definitively whether this particular underwater drone is worth forking over the cash for, I find it very intriguing. Underwater drones for consumers is still an emerging market for the most part.

A quick search of competitors — such as the Fathom One, OpenROV Trident, PowerRay and Gladius — turned up a variety of mostly unreleased drones, many of which required tethers and none of which were as cute and small. 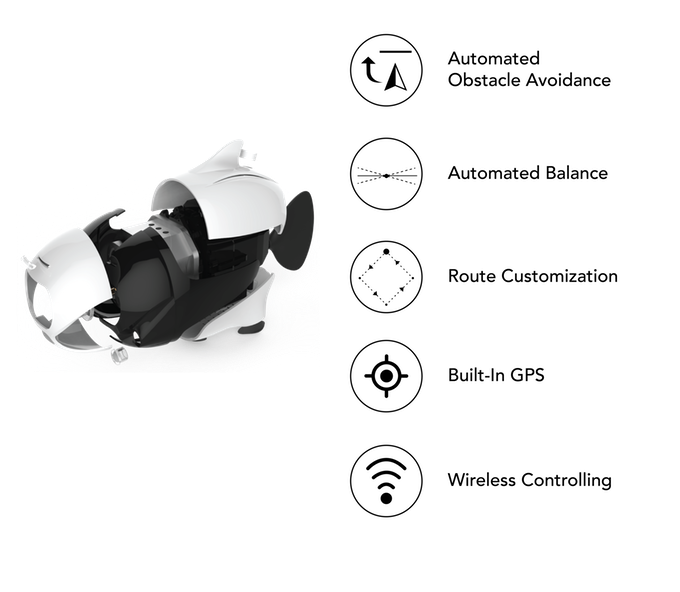 When it comes to pricing, the BIKI sits somewhere in the middle of those competitors and, naturally, that’s my main issue with the gadget.

Bump the price down, and it’d be a must-buy for me, but even at its current retail cost I have to throw this a ‘sticky.’ I’ve seen enough aerial drone shots to last me a lifetime, let’s start exploring the blue depths with our robots. And if they’re cute? All the better.