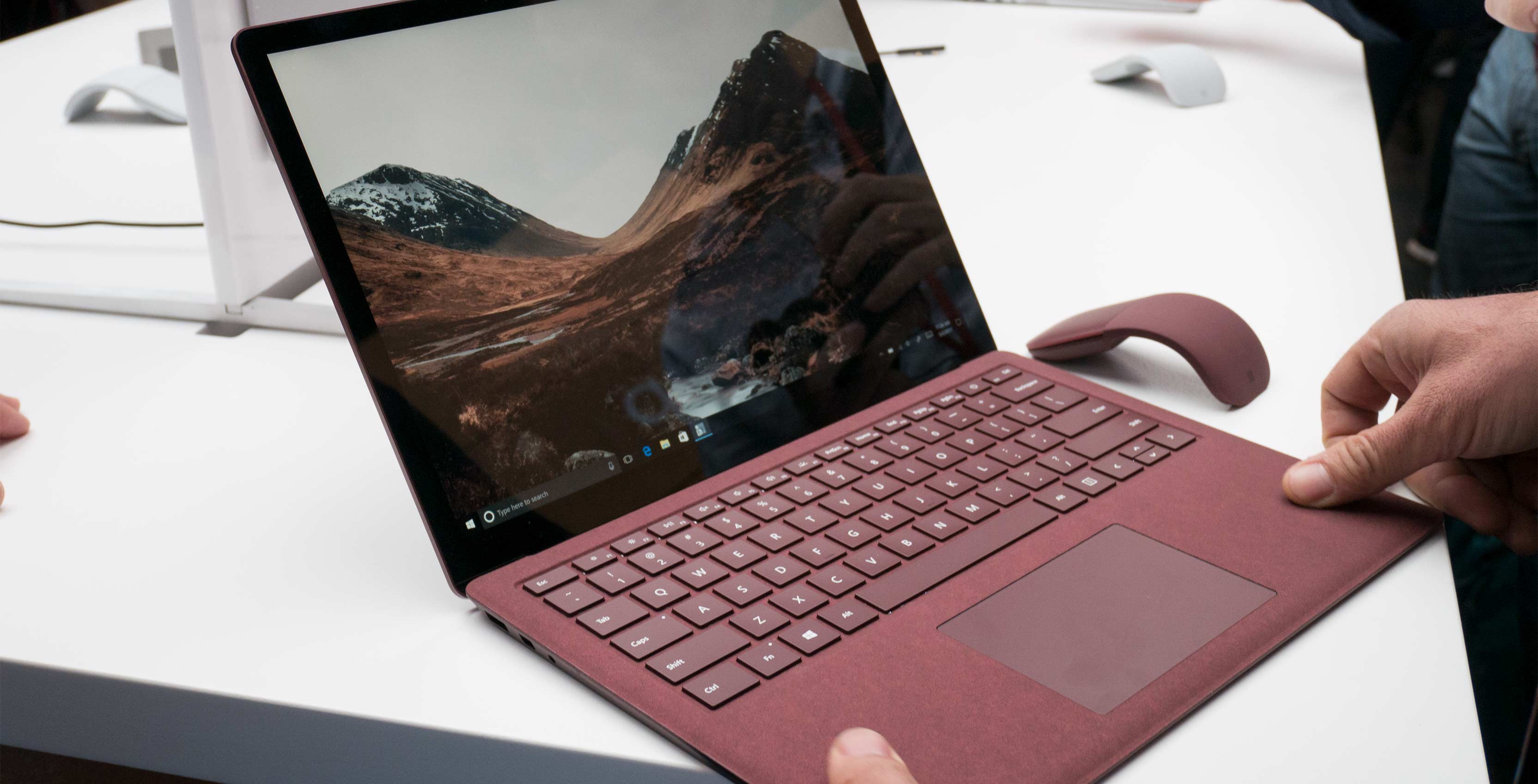 Microsoft has debuted its Surface Laptop, marking a significant step forward in the company’s aspirations to create powerful hardware to pair with its software — just don’t call it a move away from 2-in-1s.

“I think if you look at what we’ve done in the past several years,” said Ralf Groene, the head of industrial design of Microsoft devices in an interview with MobileSyrup, “Surface is a brand, not an object.”

He likened the addition of the Surface Laptop to a line that already includes the Surface Pro 2-in-1 and “transformative laptop” Surface Book to the difference between car models, stating “some people like minivans, some like sports cars.” Neither are bad, he notes, they just serve different purposes. 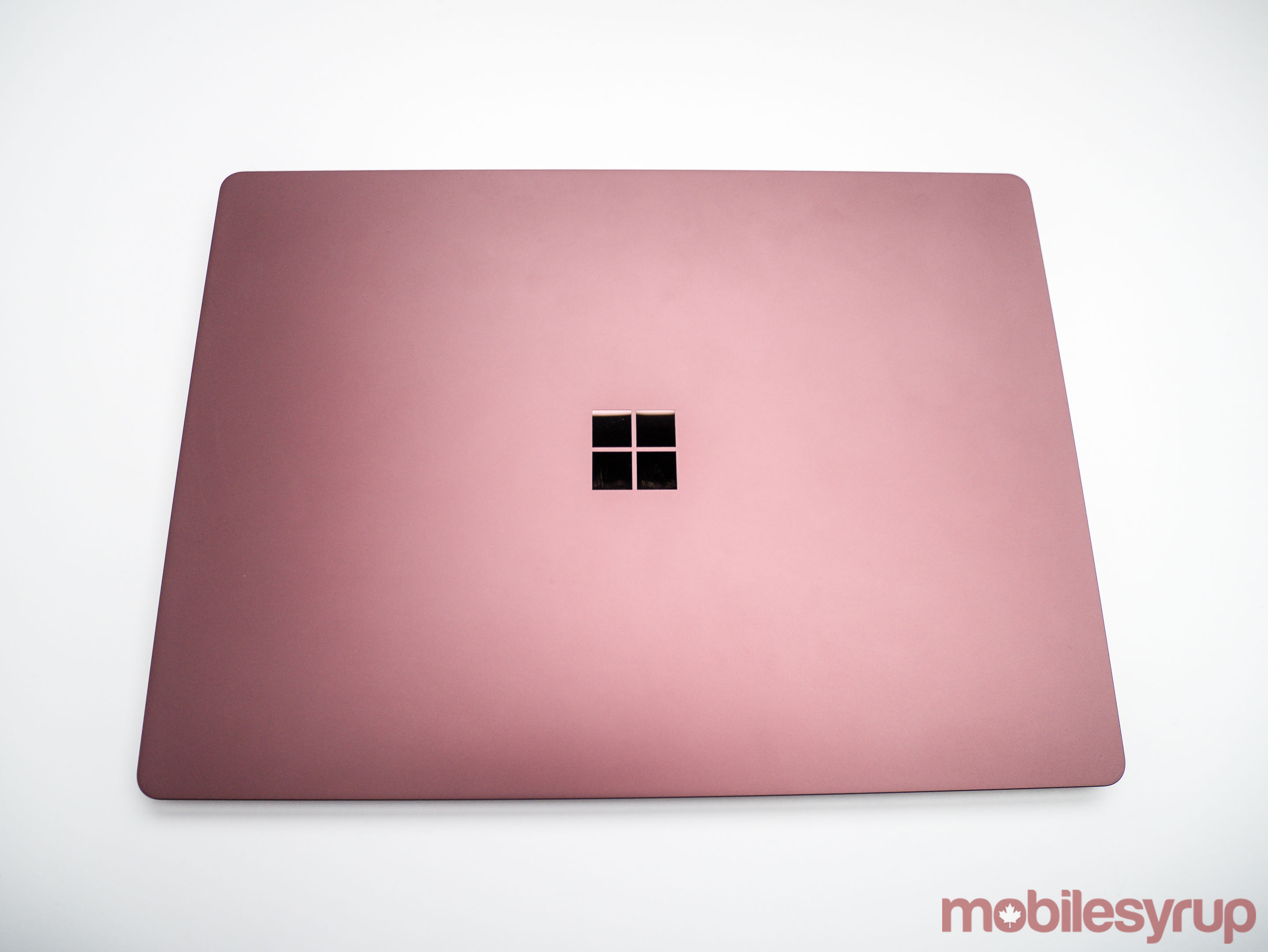 The laptop comes in four elegant metallic colours: Platinum, Burgundy, Cobalt Blue and Graphite Gold, differentiators that Groene and vice-president of Windows Matt Barlow both believe give the sort of personality that its target market of college students crave. 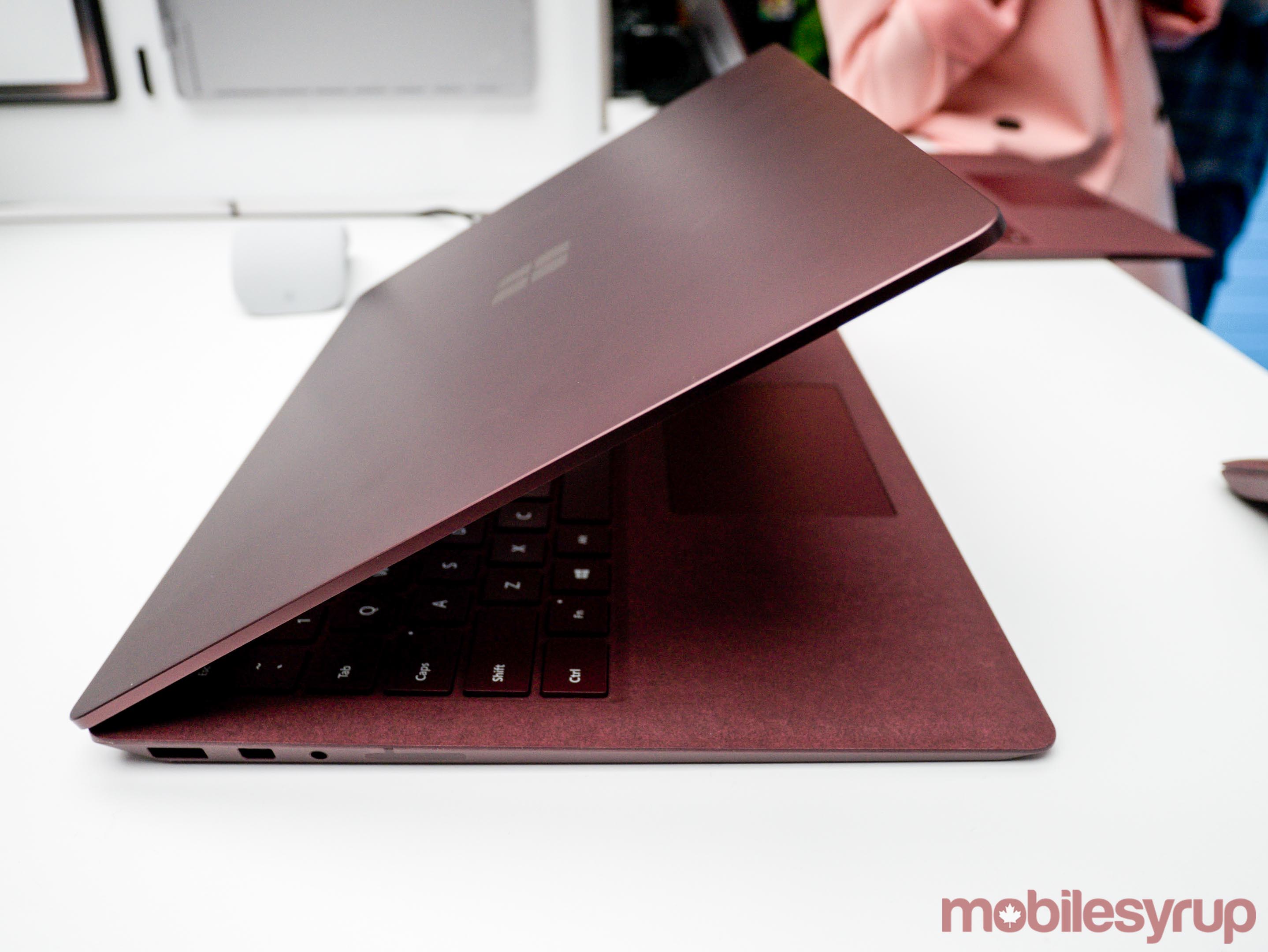 Barlow notes his own college-age daughter was sold on the Burgundy version — “not having a thing that looks like every other device out there was meaningful to her,” he said in an interview with MobileSyrup.

While this is certainly true for the Burgundy, Cobalt Blue and Graphite Gold versions, it’s not quite so true for the Platinum version which does look very much like something else out there — specifically, Apple’s MacBook. 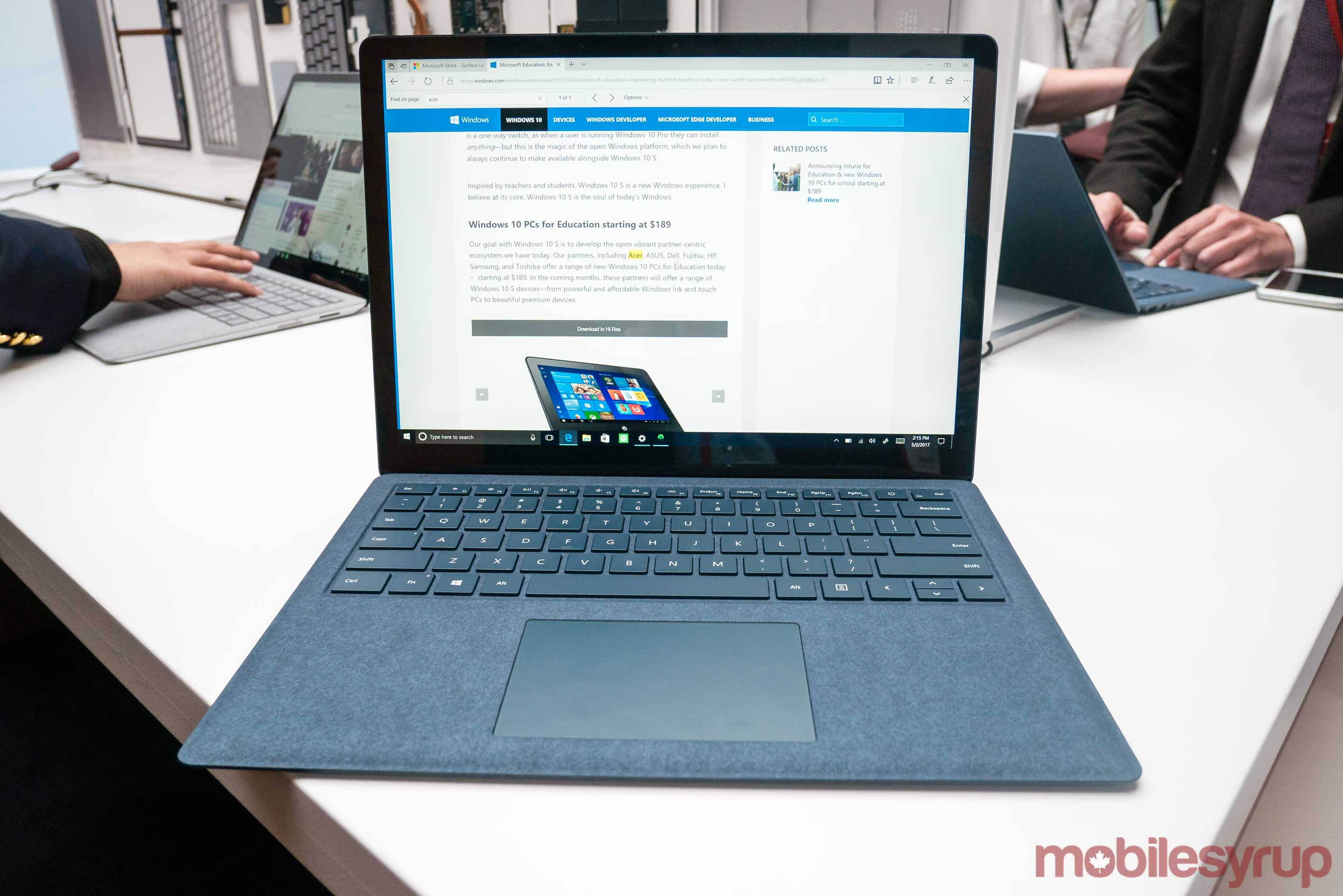 Which makes sense, because Microsoft is blatantly pitting its Surface Laptop against the MacBook, the reigning college laptop of choice.

Surface vice-president Panos Panay aimed straight for the MacBook in his presentation during the hardware reveal, stating that the Surface Laptop (presumably the Core i7 variant) is faster than the Intel Core i7-processor MacBook and has “more battery life than any MacBook on the market today.” 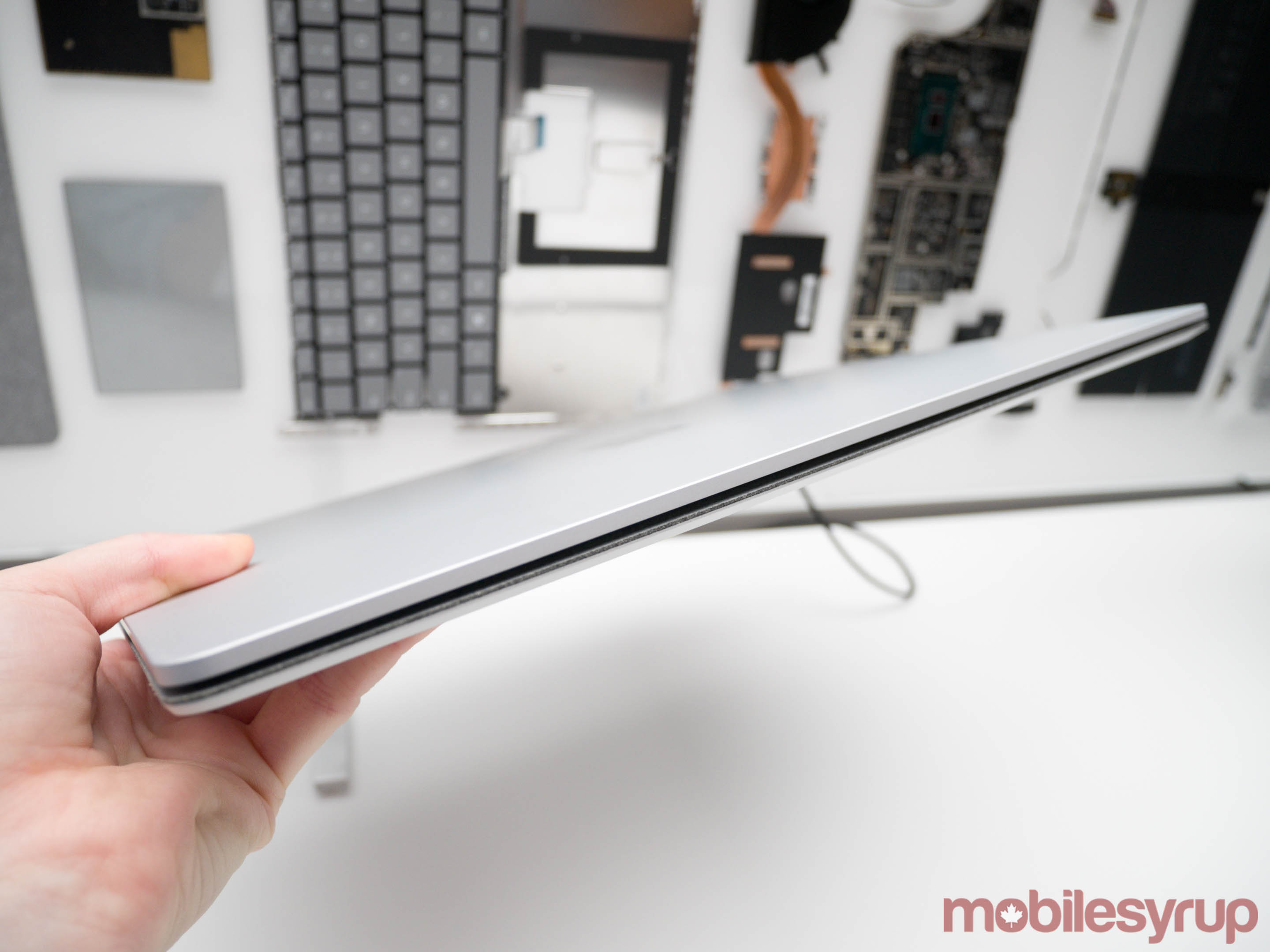 Barlow reiterated the company’s position, stating that the marriage of the hardware and software is what “makes it a great device compared to anything else on the market and specifically in comparison to a Mac.”

“Surface is a brand, not an object.”

So what are some of the bells and whistles that make the Surface Laptop such a worthy MacBook competitor?

In addition to the colour options, Microsoft is touting several other unique design elements. There’s the Alcantara fabric-covered keyboard which makes it “warm to the touch,” in Barlow’s words. 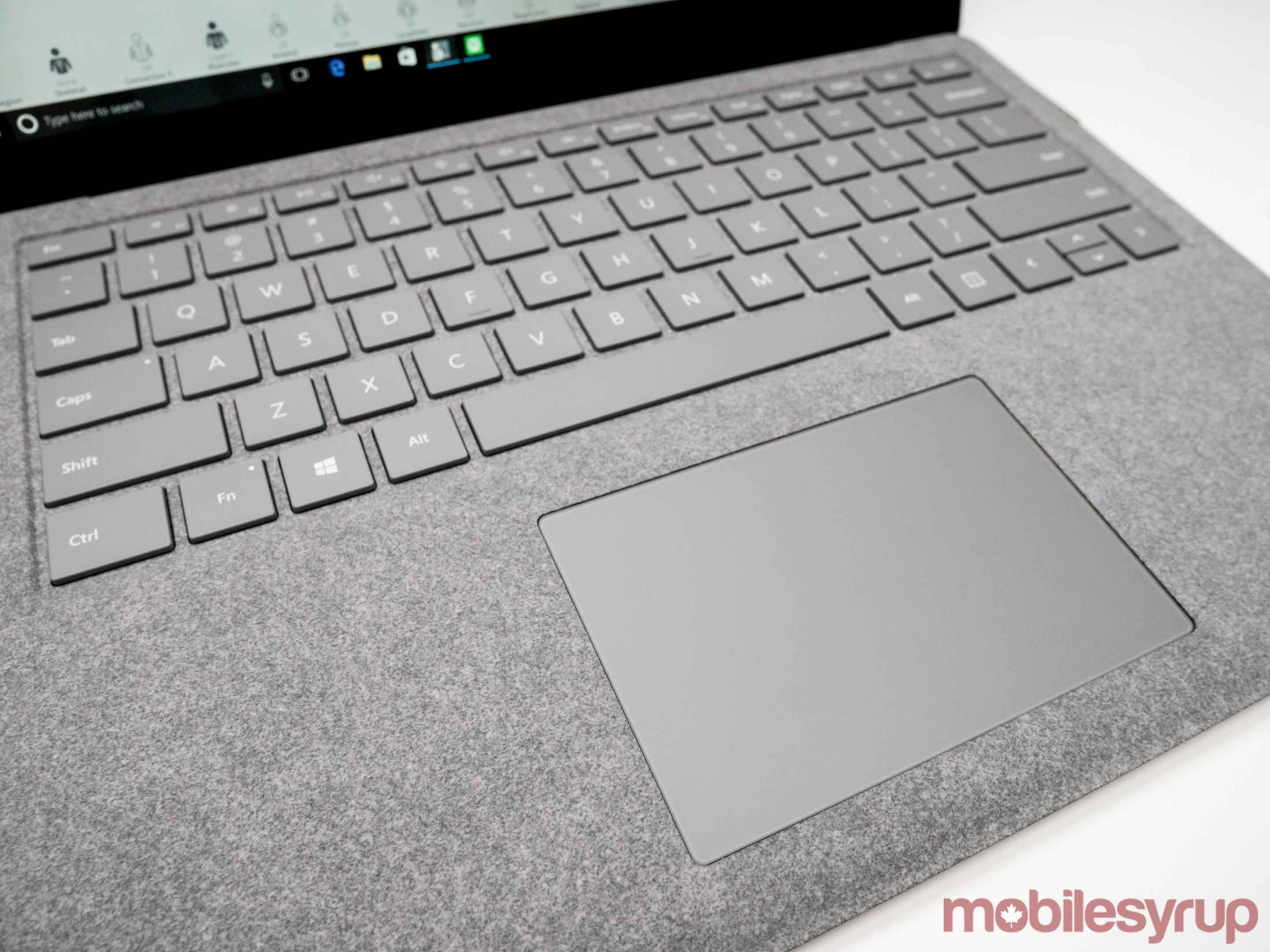 While the inclusion of fabric in the keyboard may not be groundbreaking when it comes to practical use, it does add an element of comfort and a pleasant tactile feeling that I’ve long enjoyed with my ergonomic Microsoft keyboard peripheral, which features an Alcantara wrist wrest. In my time with the device, the 1.5mm travel keys felt cushy, and the trackpad was zippy and responsive.

In my hand, the difference between my chunky 2016 Surface Book with performance base, weighing in at about 3.63lb (1.6kg), and the new Surface Laptop felt significant — the laptop would be much less taxing to tote. 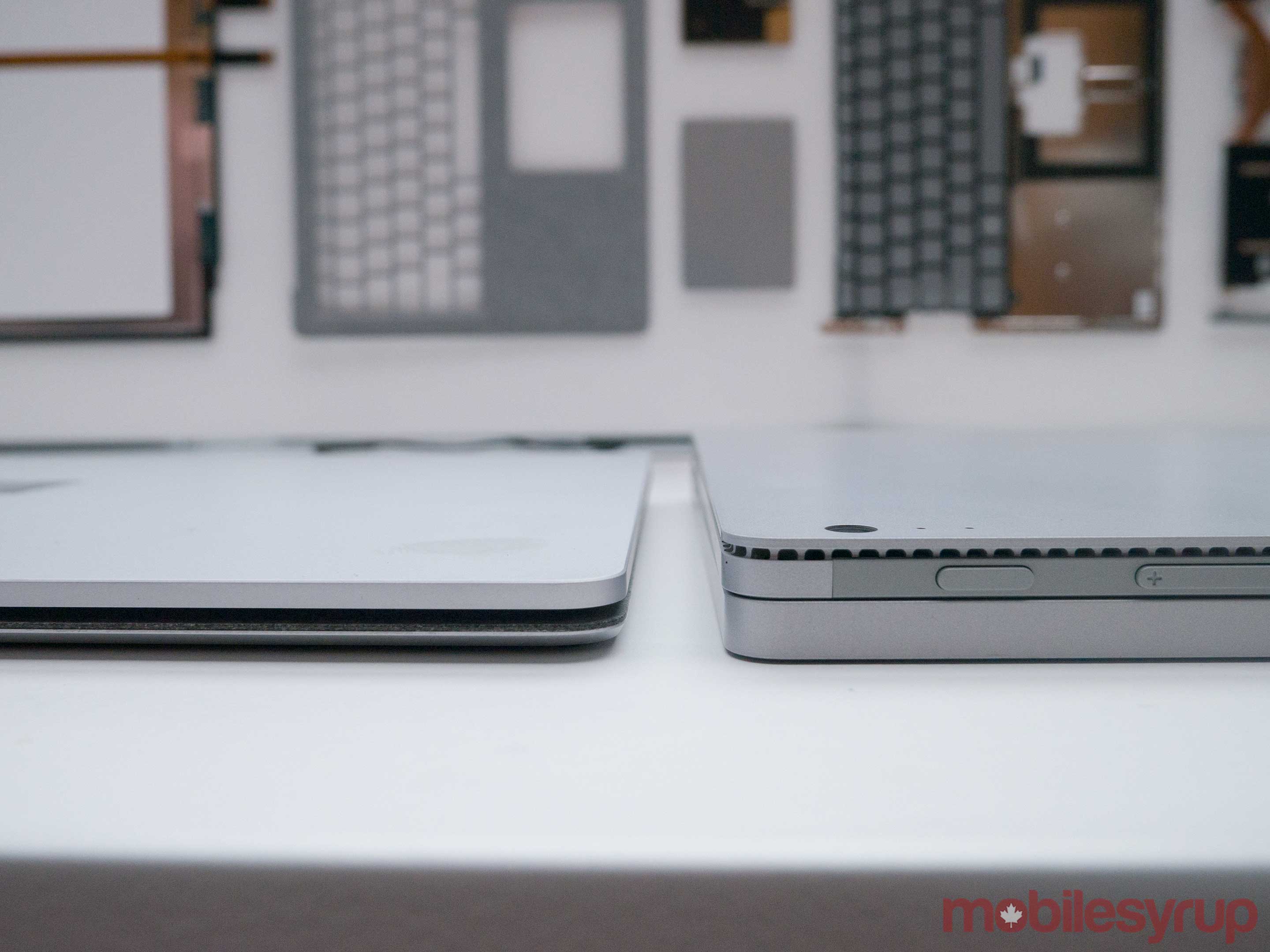 The PixelSense, 3:2 aspect ratio display is impressive in its own right, with Panay noting that it features “the thinnest LCD touch module ever created in a laptop.” The Gorilla Glass-protected display packs 3.4 million pixels and a resolution of 2256 x 1504 pixels (201 PPI), achieving a beautiful, rich look.

The display can also be used with the Surface Pen (though that’s sold separately). 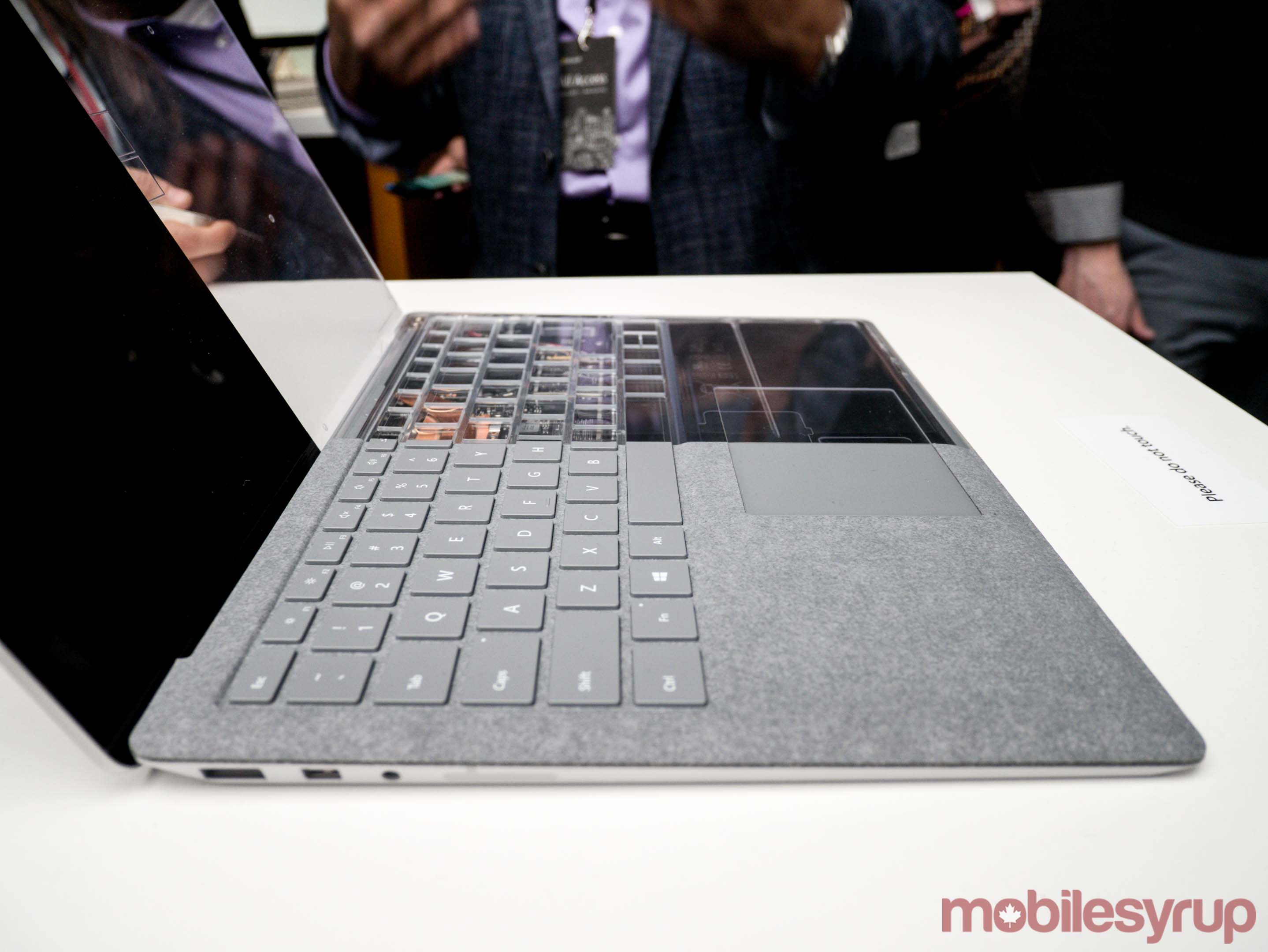 Additionally, to keep the entire design sleek, there are no speaker grilles or holes. Instead, the Dolby Audio Premium sound is pushed through omnisonic speakers under the keys, which Panay says provides a fuller sound quality.

Underneath the hood, the laptop runs on either a 7th Gen Intel Core i5 or Core i7 processor with 4GB, 8GB or 16GB of RAM and solid state drive (SSD) options of 128GB, 256GB or 512GB. Graphics are supported by the Intel HD 620 in the Core i5 version and Intel Iris Plus Graphics 640 in the Core i7 version. 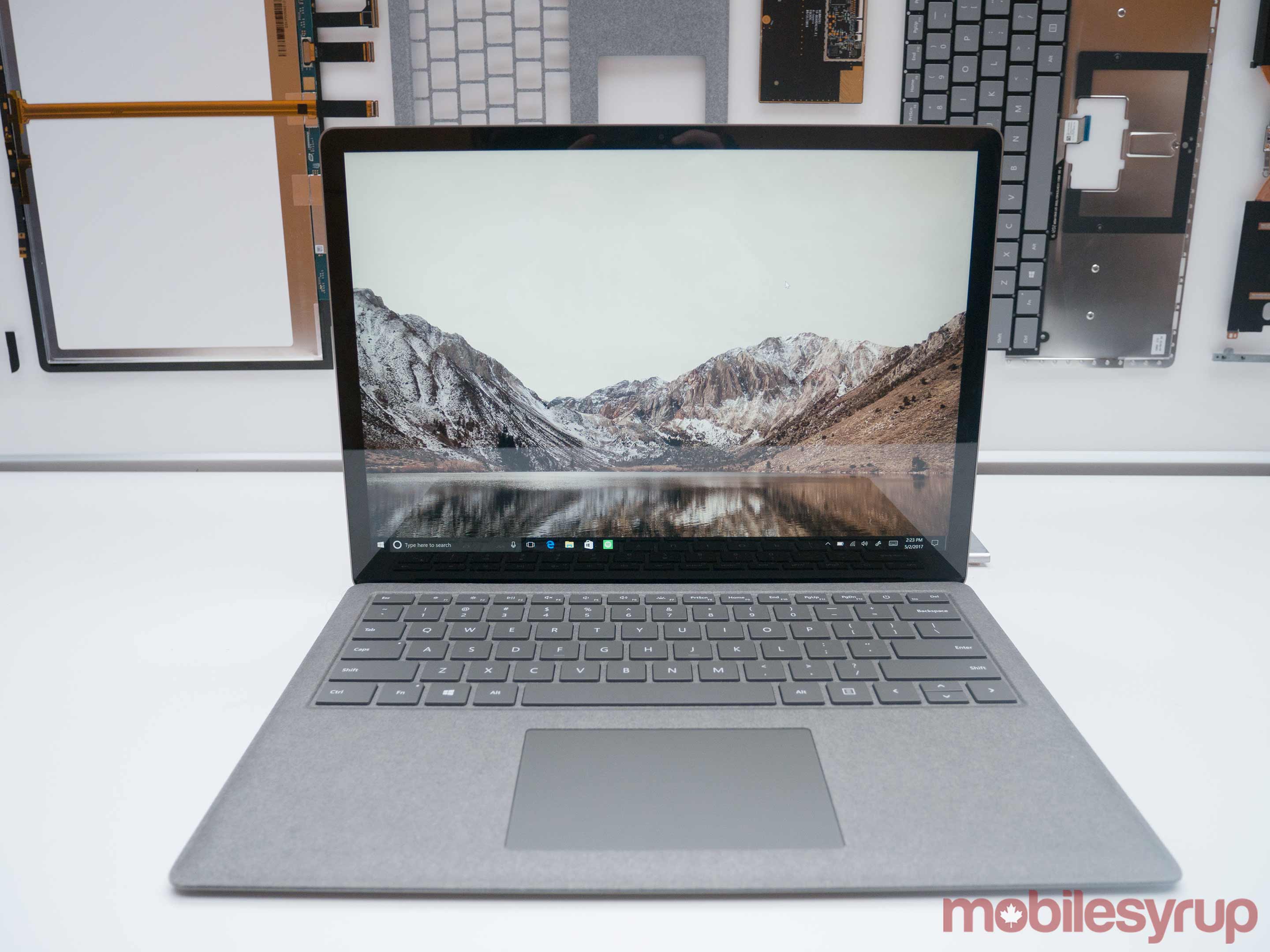 While the company isn’t detailing specifics on battery size, the Surface Laptop’s marketing states the device has an extra-long 14.5 hour lifespan, which the company attributes in part to its hardware, and in part to Windows 10 S, the simplified, Chromebook-like version of Windows also debuted at the event.

In Windows 10 S, users have access to only apps available in the Windows Store — whether Universal Windows Platform or ‘Centennial’ apps converted from desktop — which Microsoft says numbers in the thousands. The simplified operating system sips a lot less battery, according to Barlow, because there’s “nothing running in the background constantly and no unwanted apps on your system actually draining battery life over time.” 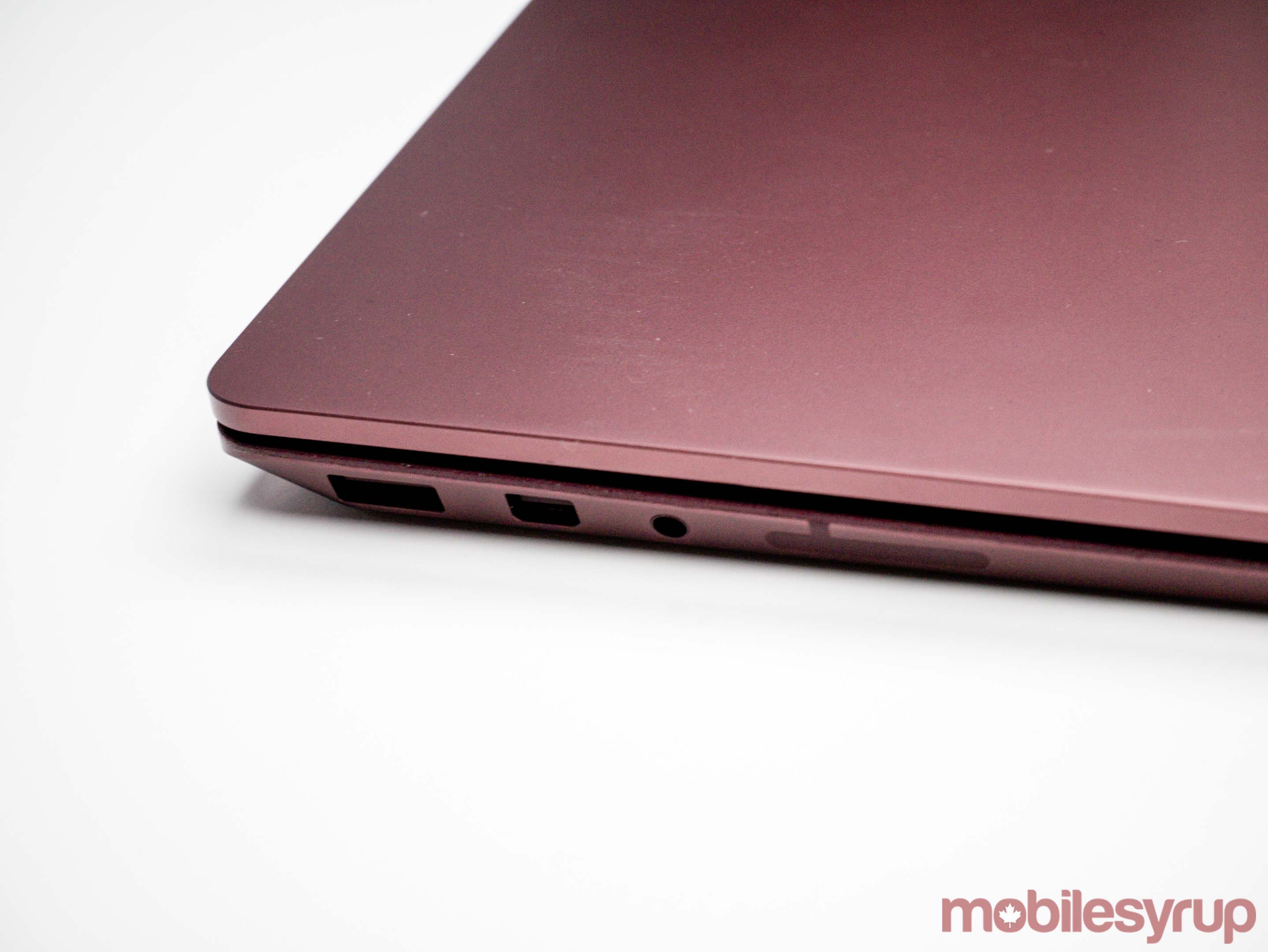 An added bonus is that all apps are verified secure by Microsoft, which allows safety-conscious users to rest easy.

But if users feel restricted by Windows 10 S, there’s also the option to upgrade to Windows 10 Pro. For education users, that upgrade is always free, while all other consumers can get the update for free until December 31st, 2017 and $49 USD after. 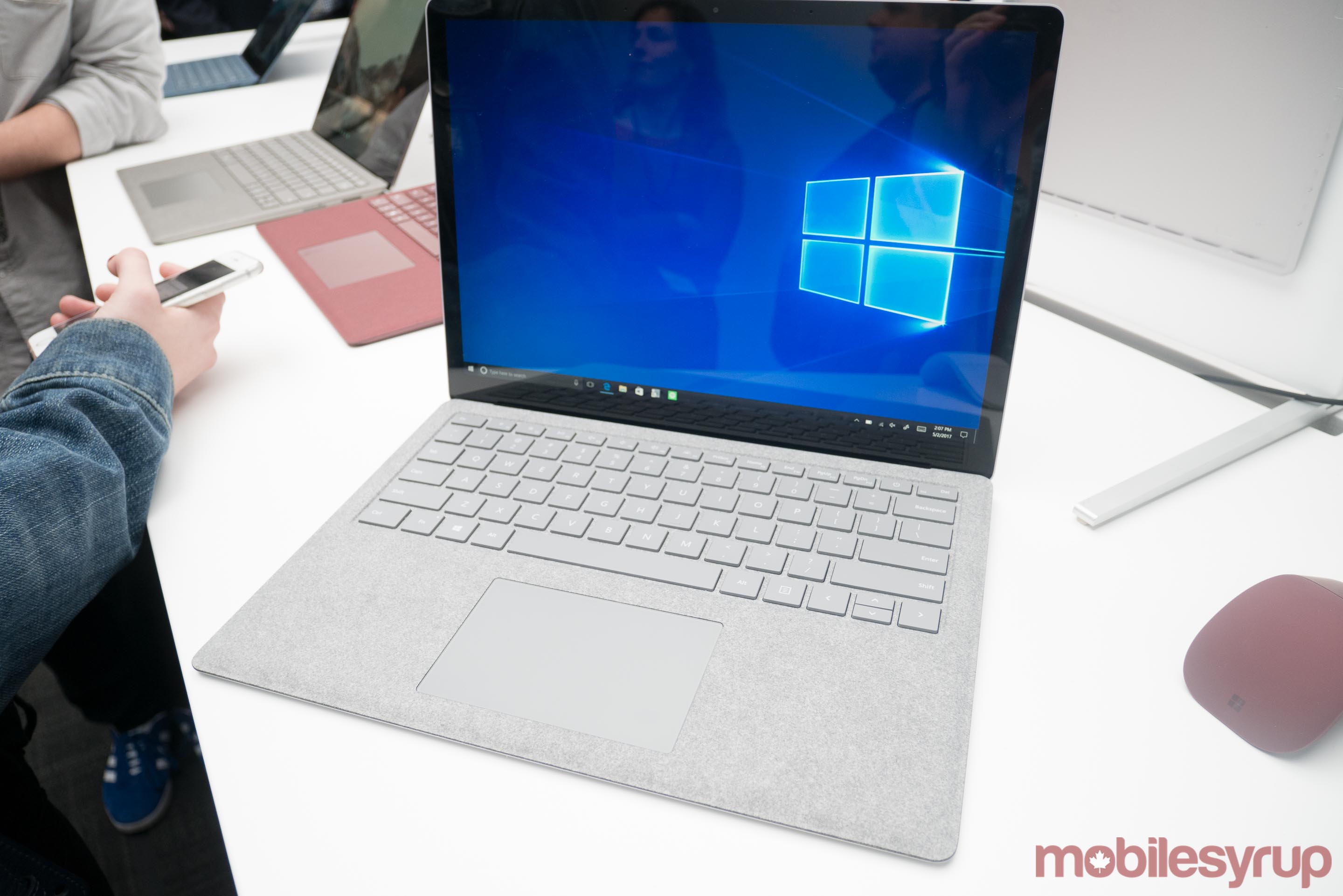 Another unique element touched on by Panay is the laptop’s cooling system, which uses a unique thermal system to keep the thin device at an appropriate temperature.

In addition to a fan and subtle vent lining the back edge of the laptop’s base, Groene notes the machine has “conductive heat spreaders that are hollow inside and have liquid,” otherwise known as vapor chambers. 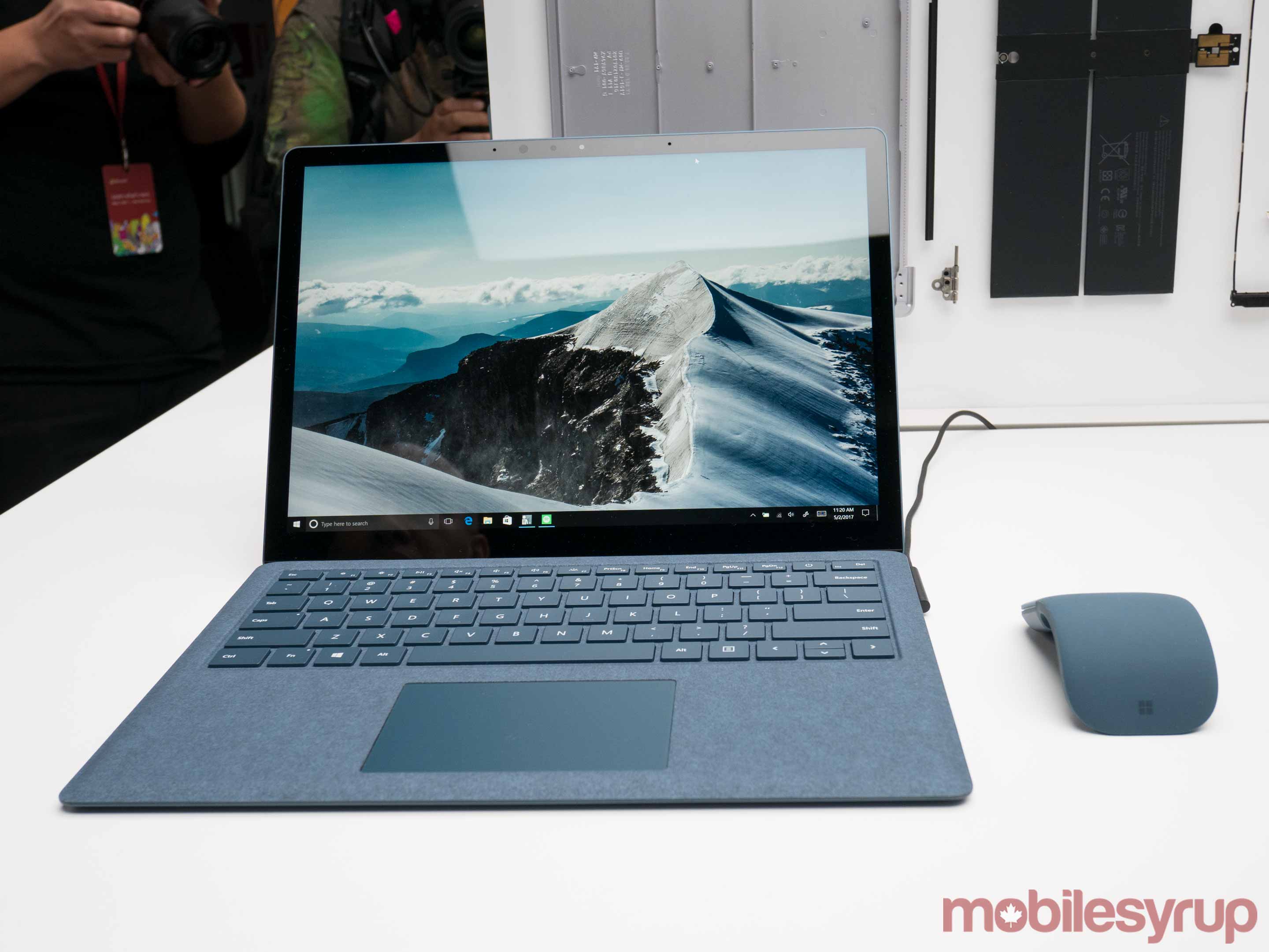 “We engineered them custom to the machine and the Surface Laptop we mounted them to thin bottom plate of aluminum,” says Groene.

This form of heat-wicking gave the designers more space to pack other elements in and provides a rigid architecture, according to Groene.

As for ports, the laptop features a 3.5mm headphone jack, USB 3.0 port, mini DisplayPort, 3.5mm AV and SurfaceConnect charging port. Many consumers have already expressed concern at the lack of USB-C port. 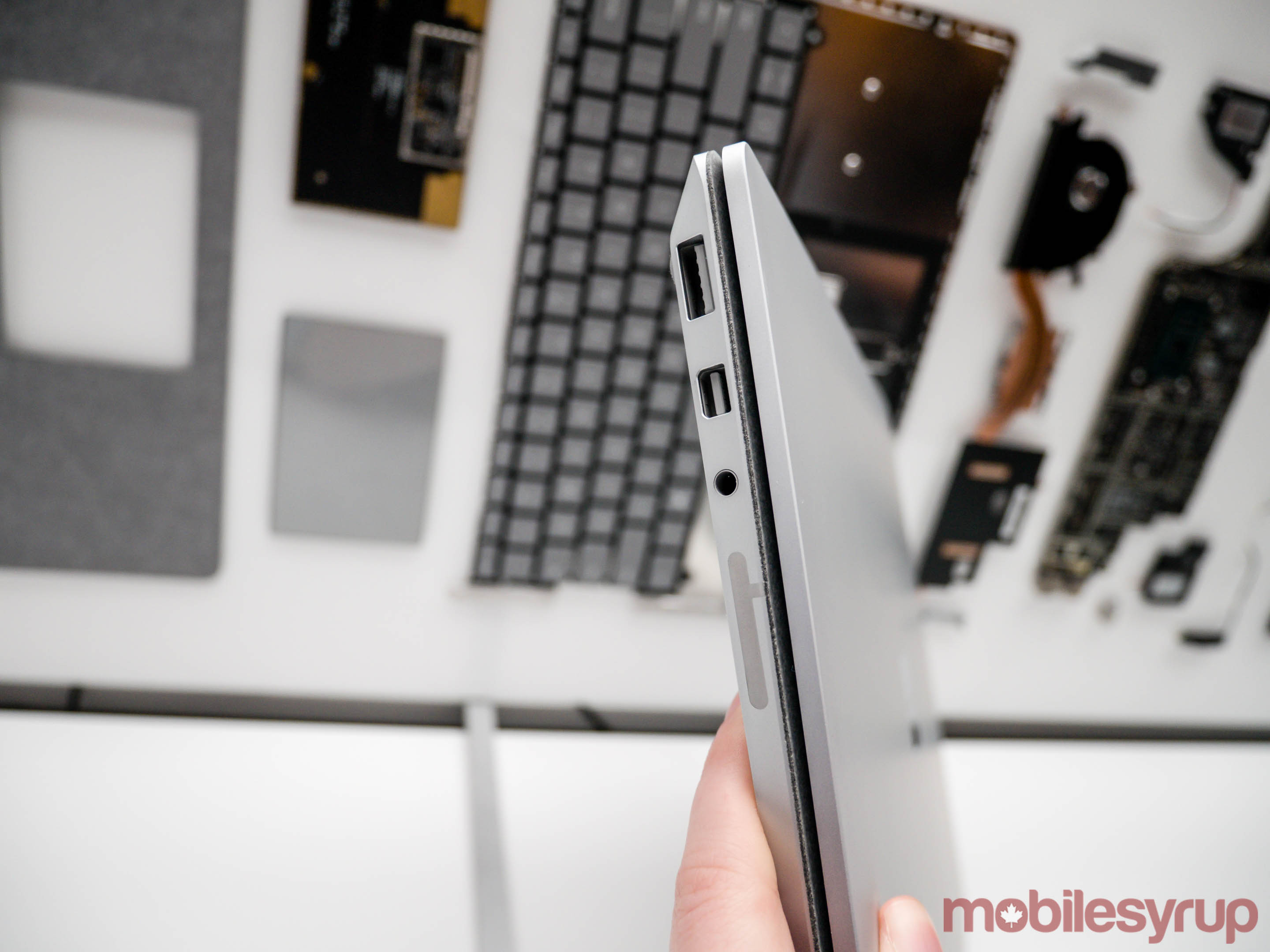 When asked about the issue, Groene said, “The USB connector is a connector in transition. If you take a snapshot of now and the next four years, people have a ton of stuff that they’ve bought and want to hold onto, that is USB-A.”

While I don’t consider this an issue, since even my USB-C devices came with USB-A to USB-C cords, this will surely count against the device in the eyes of many. 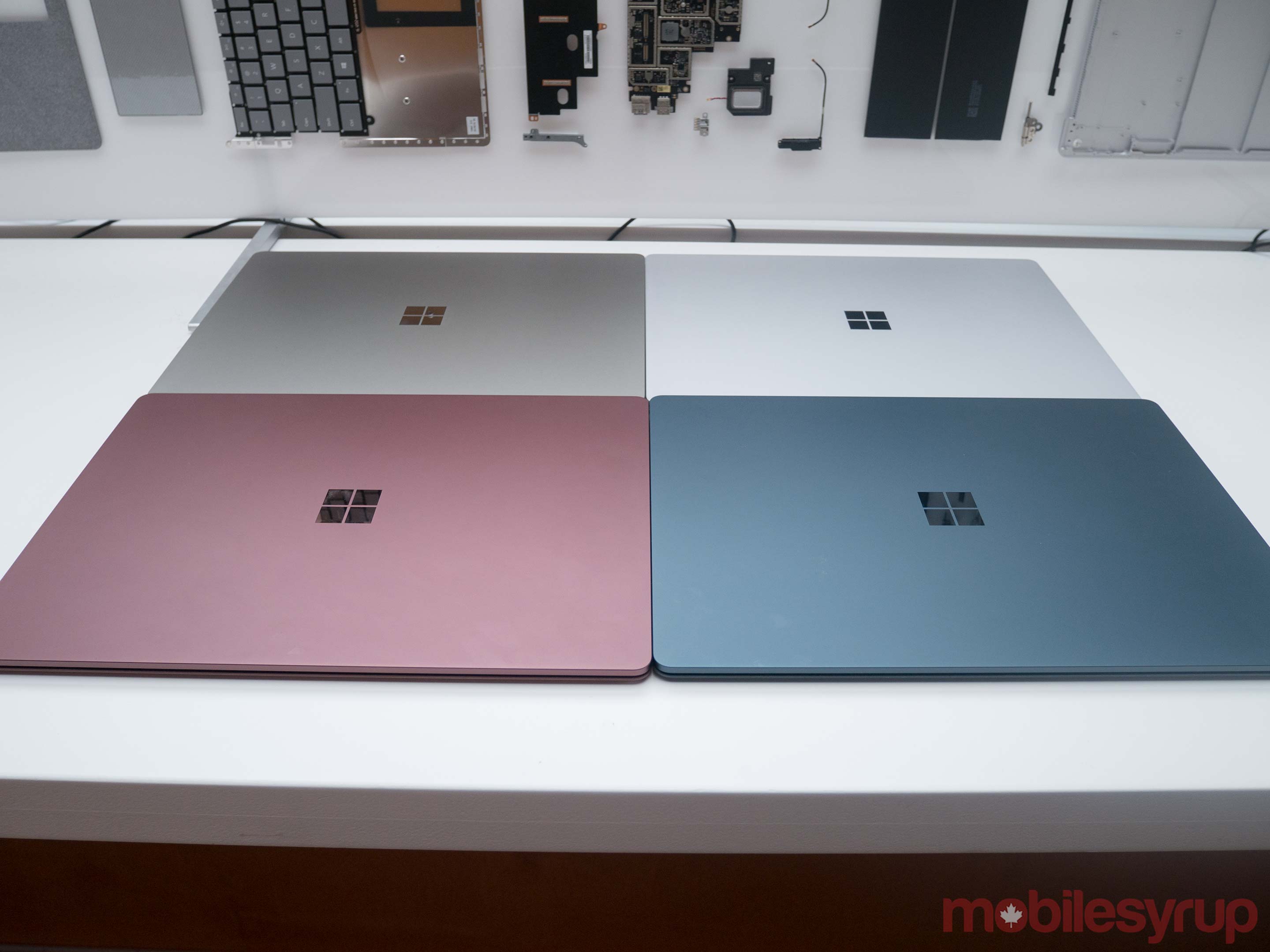 A bonus if you have a spare $129.99 CAD, the Surface Dial controller is also compatible with the laptop.

Keep an eye out for a review of the new laptop in the near future on MobileSyrup.