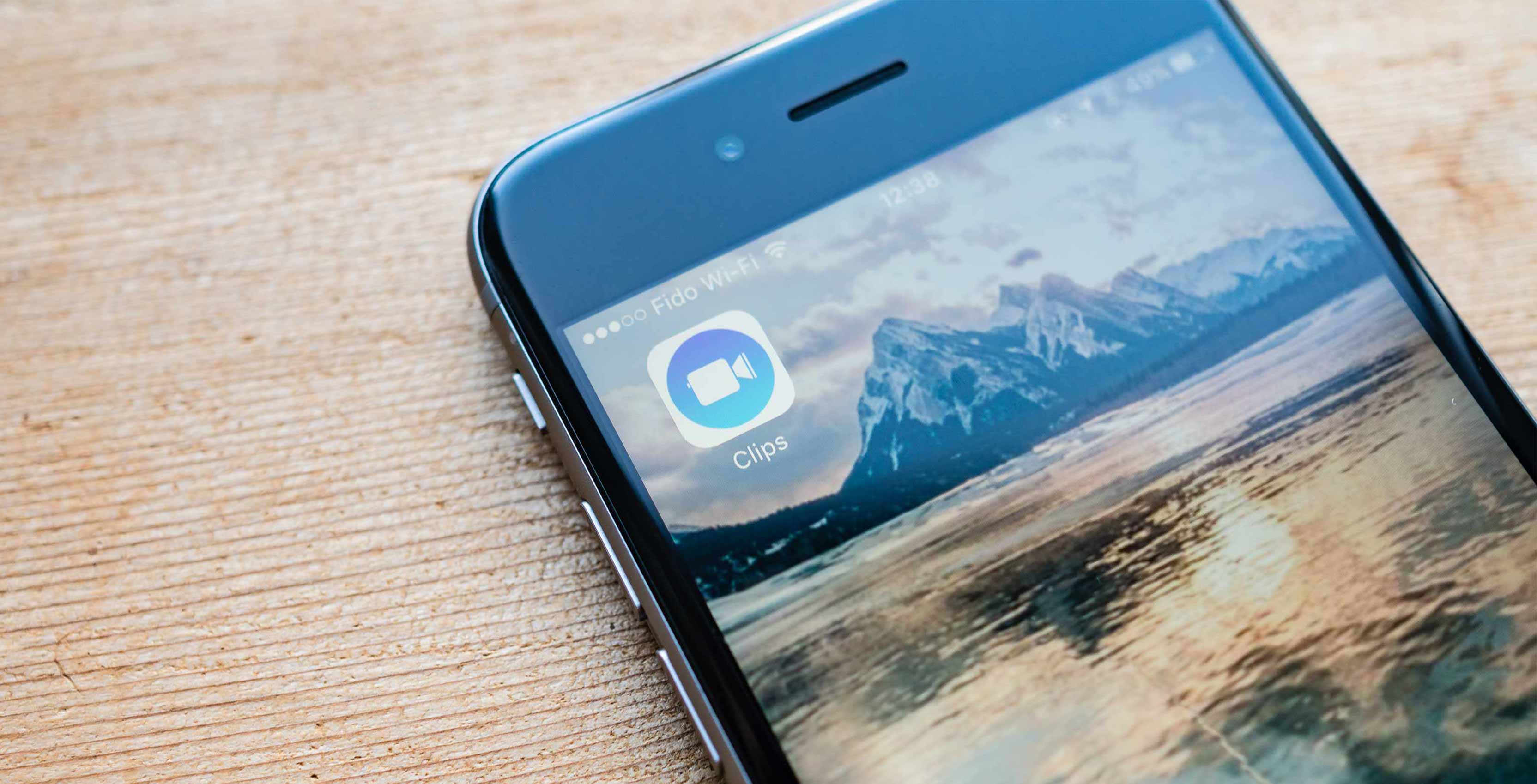 I mean that in the best way possible. The company’s new social video creation app is not perfect, but it does mark something of a return to the Apple of old.

It’s Apple doing what it does best: taking scope of the consumer tech landscape, borrowing ideas it thinks are smart and repackaging them into a slick new package. With the exception of one feature, Clips doesn’t do anything particularly new, but what it does do, it does well. Moreover, it wraps all of its functionality in an easy to learn and use package.

If you’ve ever used Snapchat or, for that matter, any other recent video and image capture app, then Clips will be an intimately familiar experience. At the bottom of its main screen, a large button allows you to capture videos or photos. Typically apps of this type combine photo and video onto one button.

Apple has instead decided to separate the two, presumably to make it clear that Clips can do both photos and video, something that isn’t obvious to everyone when they first encounter the single capture button interface popularized by Snapchat. Once you start recording, all photos and videos are captured in square format to make sharing the resulting creation to social media as seamless as possible.

Above the live screen sit four icons that represent the majority of the app’s functionality and creative avenues. 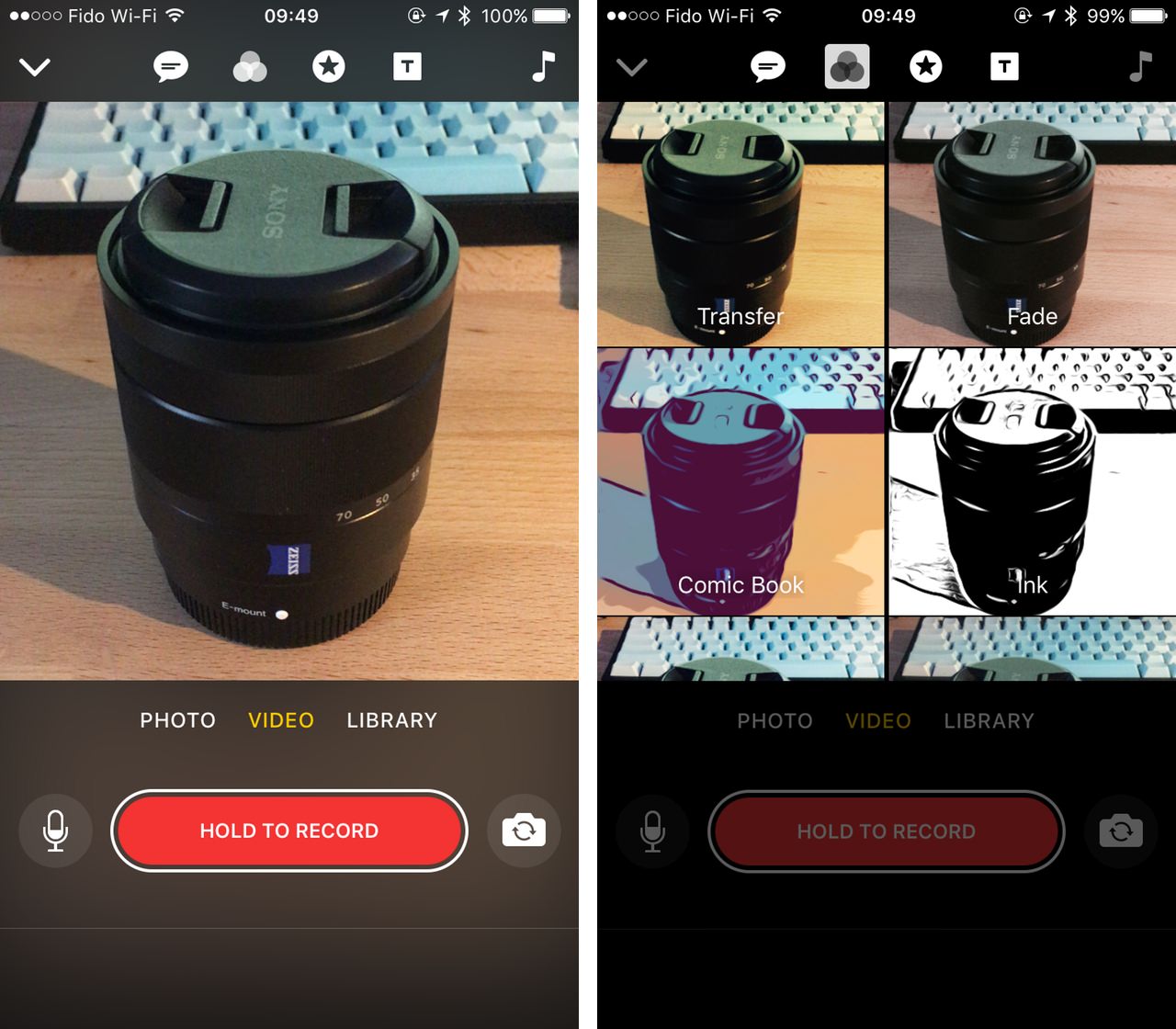 To start, there’s ‘Live Titles.’ From a technical standpoint, this is the app’s most interesting feature. Using the iPhone microphones, Clips captures and automatically subtitles dialogue during a video segment. Even better, adopt a dramatic cadence and the app will also time subtitles so that they’re properly synced with to a person’s delivery. At launch, this part of the app supports 36 languages, including Canadian French, and seven different subtitle styles.

If you’ve seen the type of social video that media publications have flooded Facebook in the past year (the type that play automatically without audio), then it’s easy to understand how this is Clips’ most useful and powerful feature. It allows users to create exactly that type of content without any type of formal video editing training.

Of course, the underlying tech is not perfect. Clips can’t transcribe audio after the fact; users need to tap the live titles icon and pick a subtitle style before recording a clip. Moreover, it won’t do every transcription, though the app is surprisingly smart when it comes to the spelling and capitalization of names and other proper nouns. Moreover, it’s easy to fix any transcription errors without too much hassle. Pacing can be sometimes an issue as well. To get the best result, it’s best to record in a quiet space or record multiple takes. 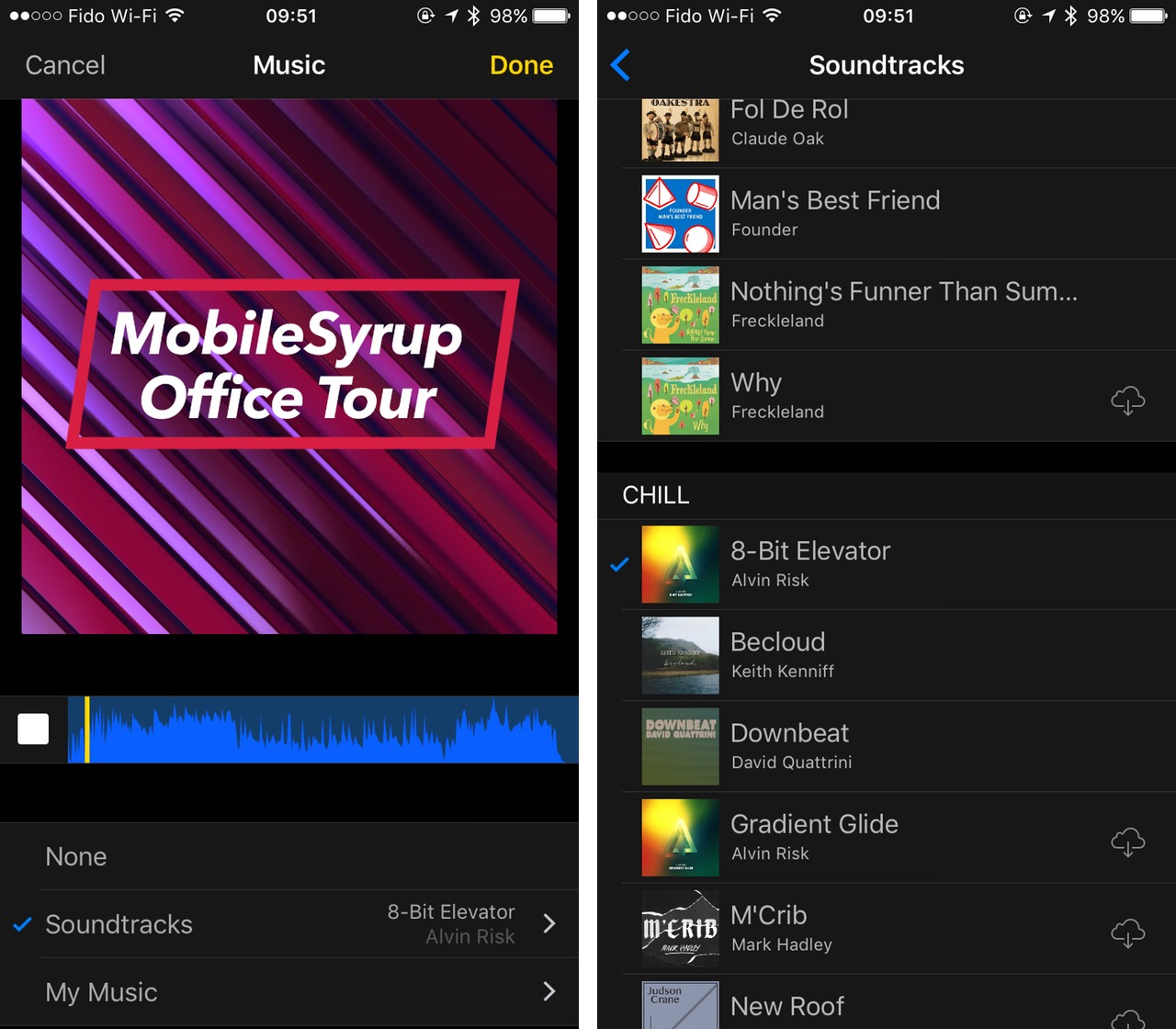 Next to the live titles tab sits the ‘Filters’ tab. It work as exactly as expected. Take a photo or start recording a video clip and the app will add an overlay to the image. Unfortunately, there are only seven filters to choose from at launch; if Clips has a weakness currently, it’s that it doesn’t have nearly enough filters to choose from, or, for that matter, live titles and other effects as well.

The app also won’t turn you into a handsome buck or doe; Apple’s handful of filters aren’t as sophisticated or fun as what’s found inside of Snapchat and Facebook. Thankfully, unlike live titles, filters can be applied after the fact.

Then there’s the stickers tab. It allows you to add colourful captions and emoji to both videos and photos. Each caption has its own special animation. With photos, you can decide how long those animations play out for by holding the record button at the bottom of app. Last but not least is the titles card tab. It allows you to add title cards to signify things like the end of a video, as well as act breaks. 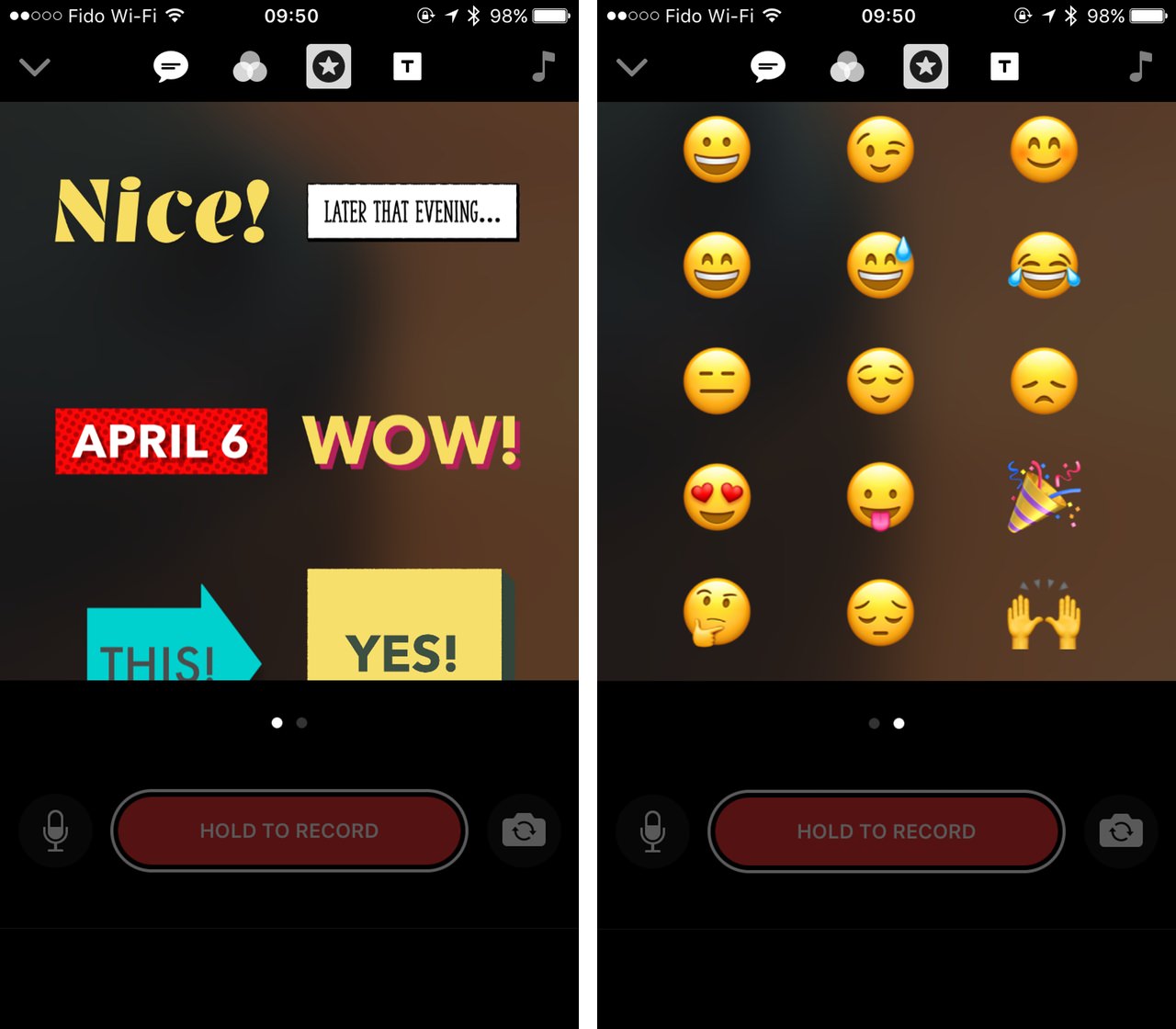 One final tab, located to the far right of the interface, allows users to add musical accompaniment to their creations. This is Clips’ second best feature. When adding music, you have two options. You can either add tunes directly from your on-device music library, or pick from one of several tracks that come with Clips.

Apple comissioned several composers to create these tracks, with one, The Summit, coming from Hans Zimmer. Each track fits into a category like “Chill,” “Action” and “Playful,” and if you do decide to upload your creations to YouTube, you can do so without worrying about copyright; all the videos are royality free.

For the most part, the user interface is intuitive though it can be a bit tricky to figure out how to complete certain edits. For instance, edit the subtitles created through the live titles feature requires the user to playback the specific segment in which the subtitles play out, meaning you can’t edit them while watching the entire clip.

However, about ten minutes with the app it’s possible to create some pretty well-made videos. Obviously, like so many tools, your mileage will vary depending on how dedicated you become to the format.

Clips is not going to be exciting to everyone, but I can see it inspiring some people to learn more complicated video editing. That’s something that’s really cool in my books.

In something of an interesting departure for Apple, Clips is available as a separate iTunes App Store download and doesn’t come preinstalled on iOS. This is not the first time the company has released one of its iPhone and iPad apps separately, but I do wonder if it’s a sign of things to come.

If you own an iPhone and have any interest in creating fun videos to share with your friends, you can download Clips from the App Store today.