Bragi Dash review: too much, too fast 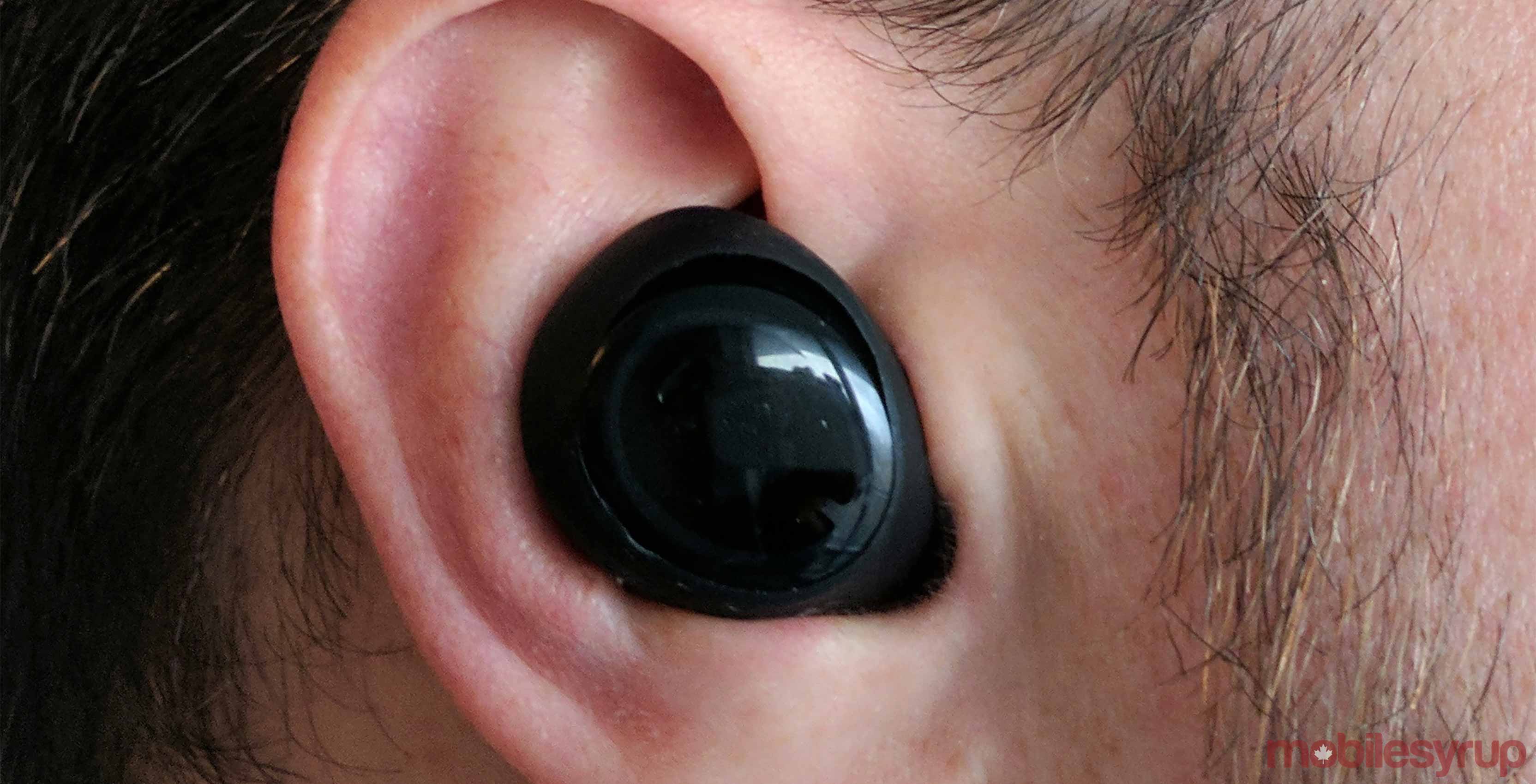 The headphone jack, or its disappearance in certain smartphones, may have been somewhat controversial, but the Bragi Dash are true wireless earbuds that cut out all the cords anyway.

The German startup originally started the Dash as a crowdfunded product through Kickstarter, and is now regularly available through retail in Canada. It’s not the first pair of Bluetooth wireless earbuds to shun all cables, but it is certainly one of the most ambitious, given everything crammed into it.

At $399.99 CAD, they would have to be. That’s almost double the price of Apple’s AirPods, so what justifies such a discrepancy? Bragi didn’t aim to only make a pair of wireless headphones, it also looked to create a ‘hearable’ device.

Listening to the Dash for over a month clarified how less is more sometimes. 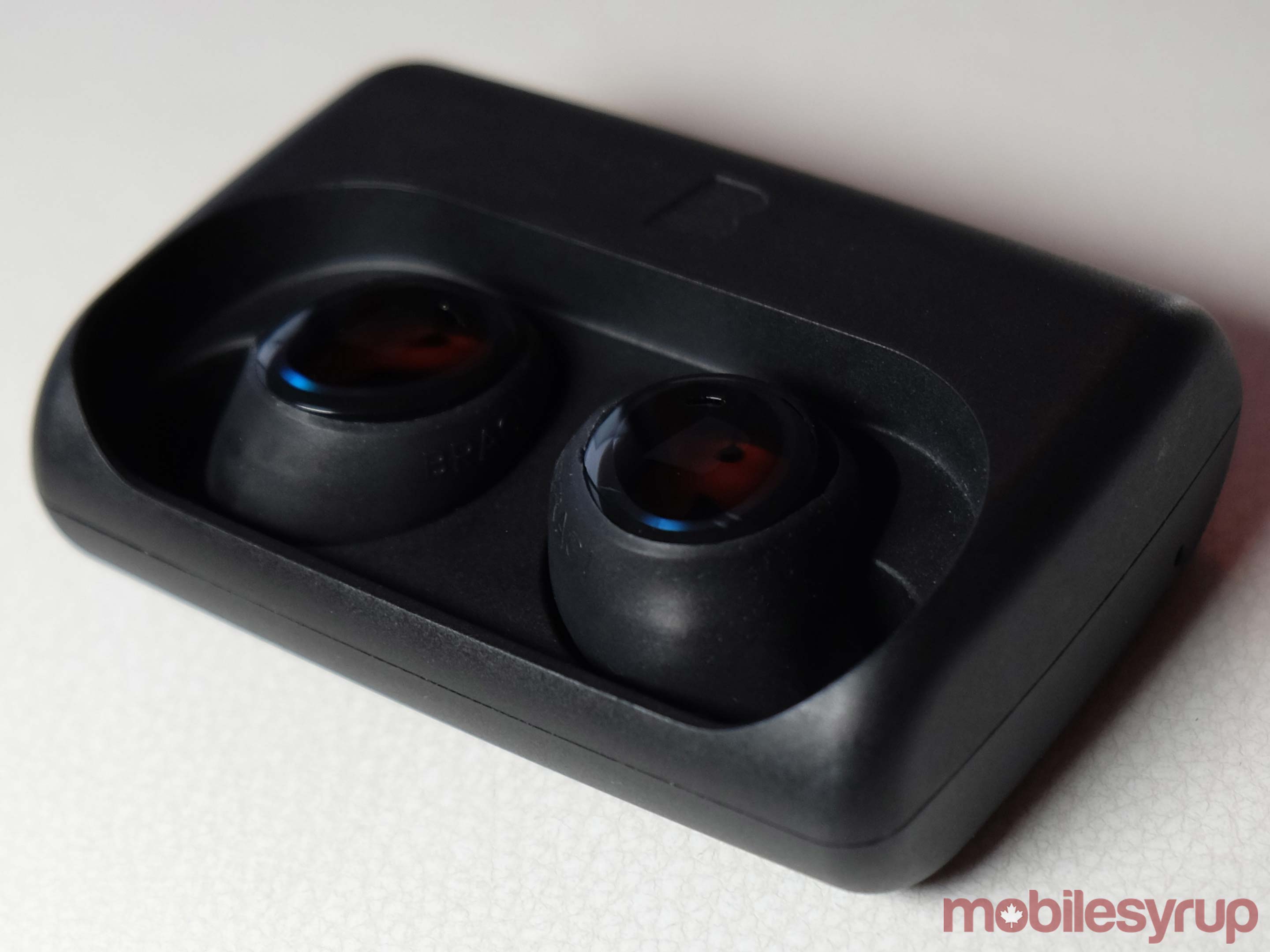 Credit to Bragi, the Dash are nicely crafted earbuds. A sophisticated and modern look with an impression there should be plenty to like under the hood. The charging case also has a certain flair to it to complete the aesthetic package.

On top of playing music, there is a heart rate monitor to help track heart rate and activity, including steps and certain exercises. An “Audio Transparency” feature can allow some ambient sound to come in to hear one’s surroundings or talk to someone without having to take off either earbud.

The 4GB of internal storage means audio files can be stored on it and played back without having to pair with a phone. The files need to be MP3 or AAC with a maximum bitrate of 320kbps, so anything from iTunes would work, except for Apple Lossless. Touch controls are built-in on either side, with instructions on how to use them shown on the iOS and Android app.

That these are even waterproof is another sign of how serious Bragi is about versatility. It’s not often that earbuds can be worn listening to music while doing laps in a pool, but alas, that is possible here.

To ensure a tight fit and avoid either one of these falling out, Bragi includes four sizes of “fit sleeves” to wrap onto the buds themselves. Actually, three of them (small, medium, large) are sleeves because the silicone bud itself is attached to a sleeve that wraps over the main earpiece. The added friction from the silicone is meant to help avoid the earpieces slipping out, even while sweating.

One exception is the extra small size, which is just a pair of earbud tips, rather than a fit sleeve. Finding the right fit is crucial to getting the best audio experience and isolate it. I ended up going with the large size, but also experimented with third-party tips to see if they made any difference. 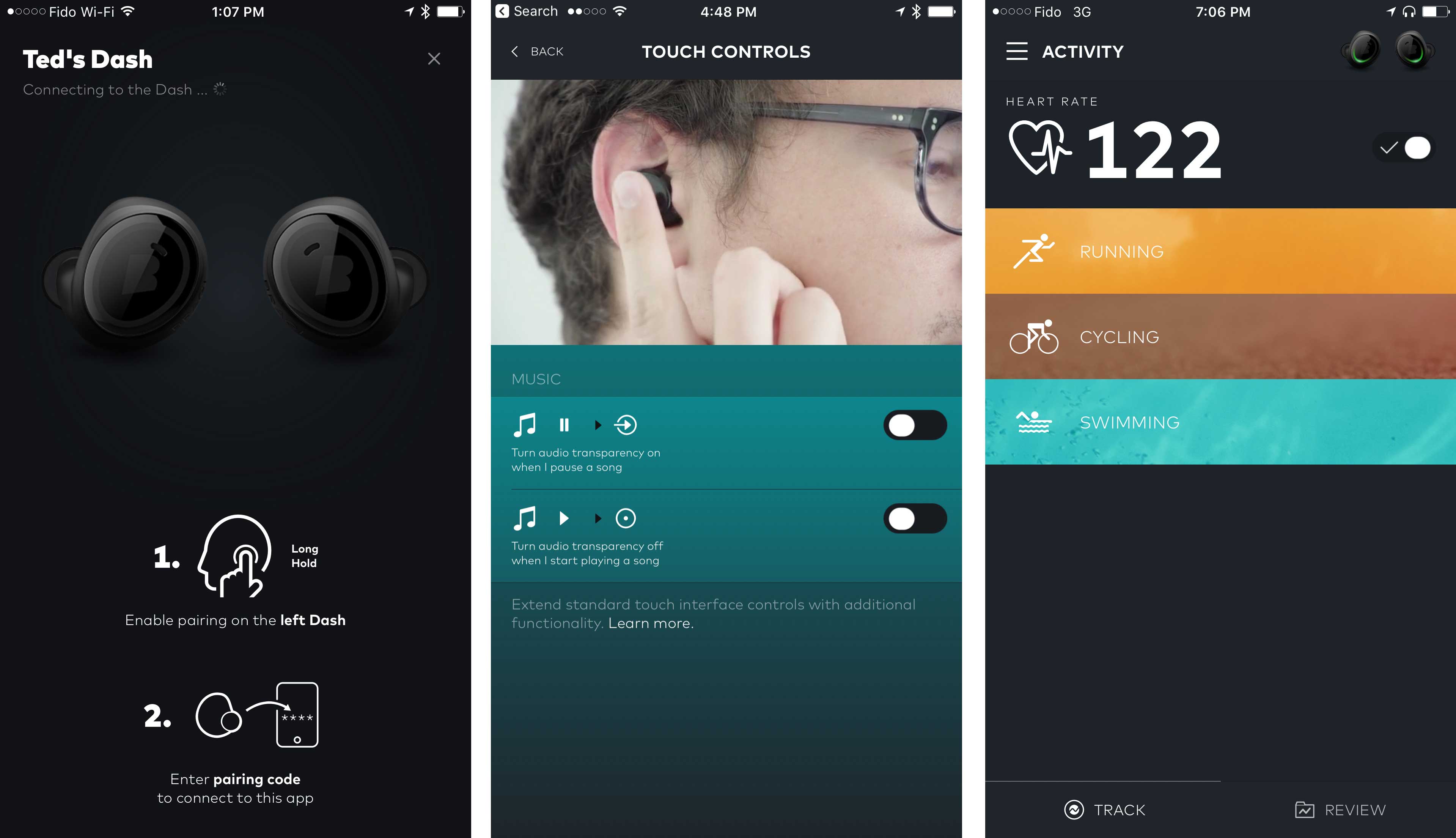 Pairing the Dash was more intricate than I expected. Unlike other true wireless earbuds that are fairly straightforward, this was a methodical process where two versions appear in the Bluetooth menu. The reason is because each one had to be paired through the Bragi app. Voice prompts cycled me through it all, tapping on the earpieces on cue to seal the deal.

Learning the various controls also took time, and even a few weeks in, I was still making mistakes. Bragi separates controls into three sections — Head Gestures, Touch Controls and Routines.

Sensors inside the earbuds can respond to head movements, like how I could accept an incoming call by nodding or reject it by shaking my head. If I wanted to, I could opt in to skip a song by nodding as well.

Touch controls were more basic. A simple tap on the outer surface of the right earpiece would play or pause. Double-tap for next track, triple-tap for previous track. Swiping up or down would control volume. Through the app, I could also turn on an added feature that would automatically turn on Audio Transparency when I paused a song, and then turn it off again once I resumed playback. Holding for about one second would trigger Siri, Google Now (or Assistant) or Cortana.

Swiping in either direction on the left earpiece would turn Audio Transparency on or off. Double-tapping it told me the time. Tapping it once started tracking exercise, with a double-tap offering verbal feedback in real-time.

Routines were more limited in scope. I could have the Dash tell me the time the moment I inserted the earpieces into my ears, or tell it to announce the time at the top of every hour. This was as far as it went for the routines, and as of version 2.2 of the software that I tested, nothing new had been added.

The good thing was that the Dash would turn on and come to life once I took them out of their case and placed them in my ears. Putting them back in the case turned them off automatically, adding to the convenience. 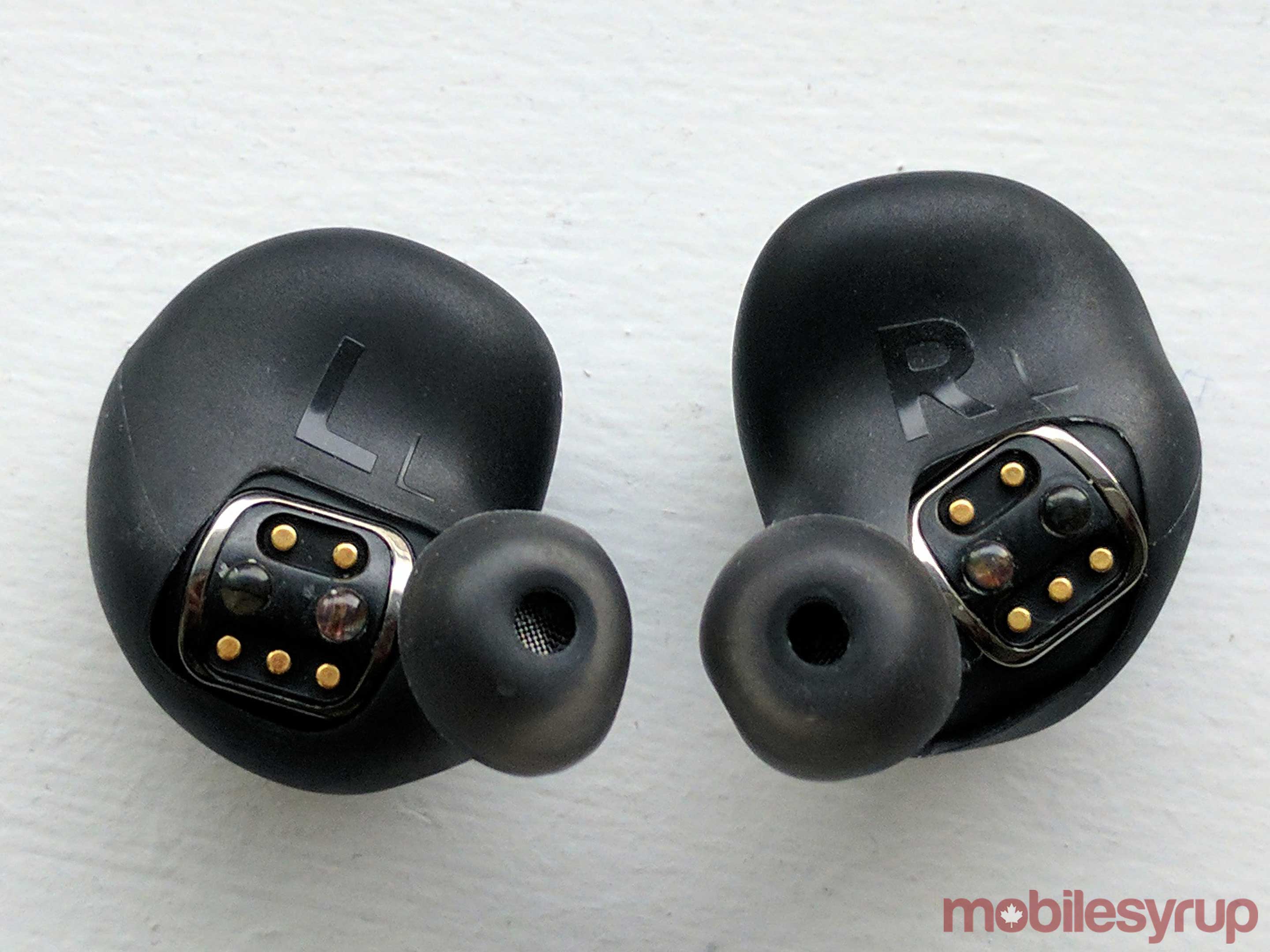 One commonality I’ve noted in both true wireless earbuds and the sports Bluetooth wireless earbuds (the type that have a cable connecting the two earpieces) is the importance of finding the right fit. Not only to keep them from slipping off, but to also keep audio from flowing out too.

Everyone’s ears are different, so this is highly subjective, but I would have preferred Bragi include an extra large size fit sleeve. The large was decent, but not airtight enough, leading to audio leakage while I wore them. I ended up finding more success using extra large gel tips and Comply Foam tips from third-party manufacturers. While these helped seal audio in, their larger size meant the earpieces couldn’t fit in the charging case without being removed first. In most cases, however, I can see that at least one of the sleeves would be a good fit.

Part of the reason for isolating audio is because leakage affects bass the most. The Dash are good at producing good overall sound without leaning too far on either end of the audio spectrum, except I was surprised at how high I had to go in raising the volume to get there.

Despite being paired via Bluetooth, the Dash has its own volume level independent of the phone, so I had to go full blast on that and then raise it further on the Dash itself. The onboard voice noted when I had reached a dangerous limit, which was also shown visually on the app. Even at that level, I found it a little too low for an outdoor or gym environment. I doubt I’m losing my hearing, so am not sure why it happened more consistently with the Dash compared to other wireless earbuds I’ve tried.

It’s liberating to listen to music in any environment hands-free and cord-free. Storing music on the Dash was straightforward too. I placed the earpieces into the charging case, plugged it into a Mac or PC and dragged and dropped music files into any of the four playlist folders. More folders could be added, if required.

Call quality was surprisingly clear, and I rarely had any issues talking to anyone. Audio transparency also proved useful in instances where I needed a little ambient sound to seep in.

Bragi has gotten heat for the weakness in the Bluetooth connection since first launching the Dash. Complaints of connections that would stop for brief moments or sound choppy, even at close distances were not regular cases I experienced. There were instances where the connection would chop up, and a couple of times where only one earpiece would play audio, but the overall situation wasn’t as terrible as I thought it might be. 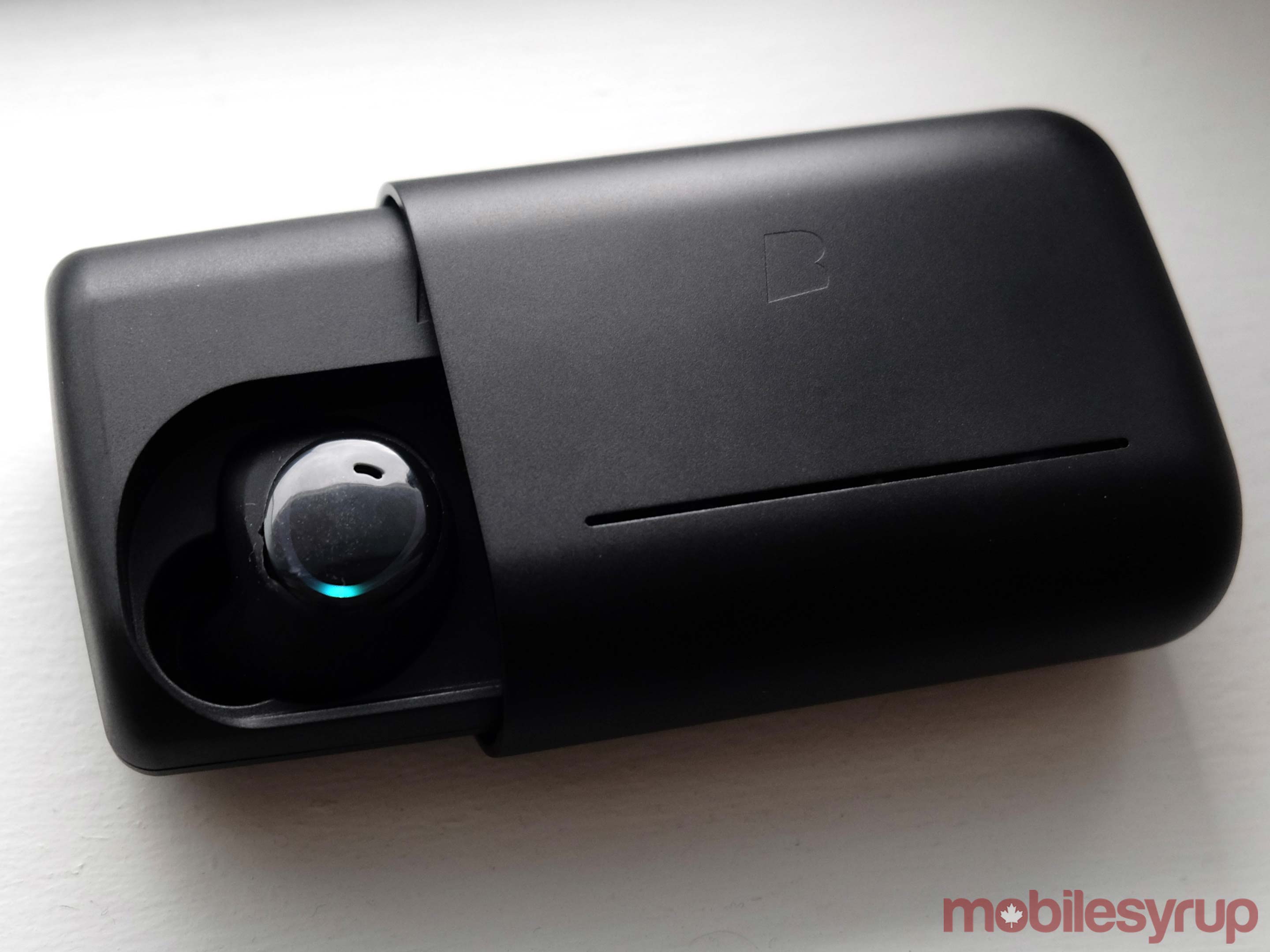 Bragi added fitness features in the app in the most recent software update, but it shouldn’t be confused as being a replacement for a more robust app. Creating a profile with weight, height and gender helps better track activity.

For now, there are only three exercises. Running measures distance, calories, duration and steps. Cycling measures speed, duration, cadence and direction. Swimming measures pool length, breaths and duration. Tapping on the left earpiece can start and stop the exercise, with a review section storing the data.

Step counts were almost in lockstep with a Fitbit Charge 2 I wore at the same time — something I found a little surprising, given previous experiences with other headphones that include fitness features. The heart rate monitor was off the mark more often than not though. I’ve long maintained that a chest strap is the best way to get a proper number. The Dash consistently exaggerated the real number, getting to the point where I didn’t really take it seriously or subtracted several beats per minute to estimate what the true figure was.

Compared to the Jabra Sport Elite, however, the Dash felt restrained. Jabra’s Sport app is more detailed, and the Sport Elite work with at least a handful of third-party apps.

The Dash is impressive for what it packs into its frame and is far more advanced than Apple’s AirPods, for example. Except the attempt, while admirable, ultimately weighs down what would otherwise be a solid product.

Battery life is another factor. The charging case has five full charges in it, which is great, and I generally heard the low battery warning after about two hours. That’s enough for most workouts, but is still too low. Battery anxiety does kick in anytime the Dash isn’t fully filled up.

And then there’s the price. At $400, the Dash are expensive. Bragi is releasing its audio-only The Headphone in Canada soon for half the price, so those looking for listening to music without all the frills will be better suited to wait for that to drop.