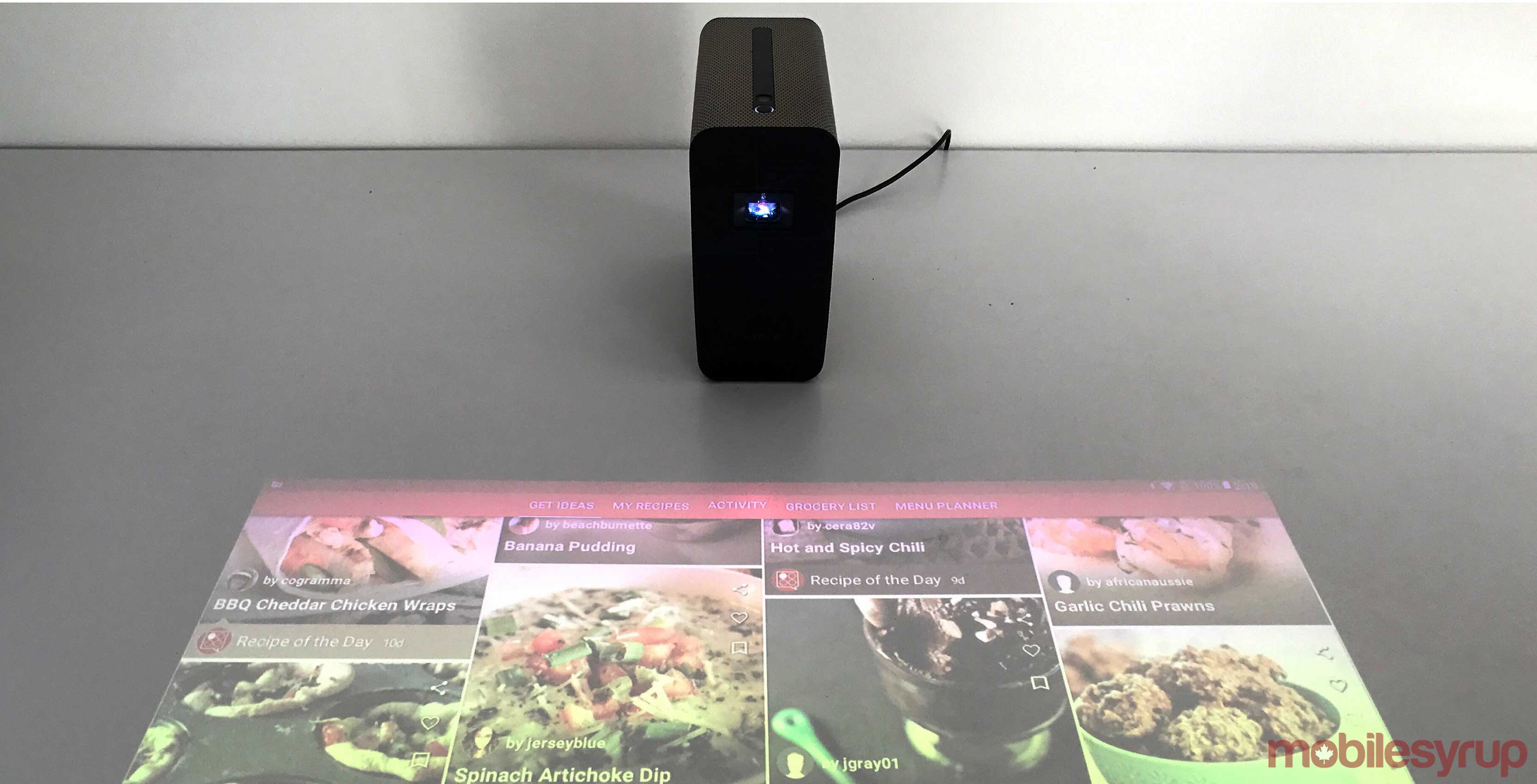 Sony has revealed its new Xperia Touch, an Android-based projector that it hopes to launch in Canada later this year.

Having shown the projector off already at CES in January, Sony had little to say about its final specs and functionality, though now there is more detail on what features the final version will include. Initially called the Xperia Projector, the projector’s name is now confirmed as Xperia Touch, and the design finalized, which is effectively the same as what was demoed in Las Vegas.

We got to see one hands-on in Toronto, though it was a pre-production unit that didn’t have all its features working. 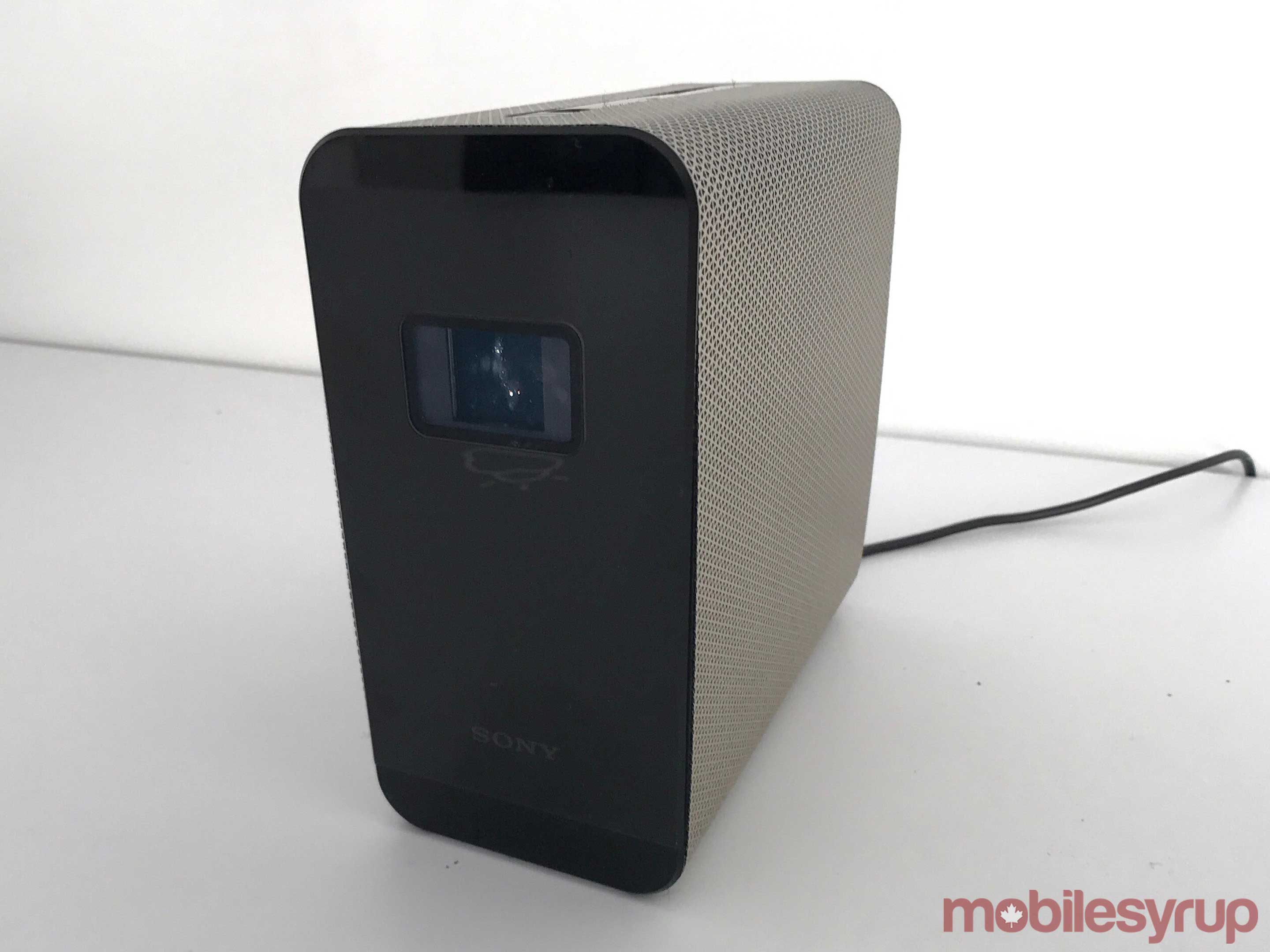 The short throw projector has 100 lumens, and is designed to work at a 90-degree angle, projecting either directly in front or above. The reason for that is because the infrared sensors need to be flat to the surface the Touch is projecting on.

The minimum display size is 23-inches, and in running on Android 7.0 Nougat, it also supports 10-point multitouch at that size, making it fully functional as a touchscreen. This is a full version of Android, not something made specifically for the device, so apps and games from Google Play are fully downloadable.

The touch capabilities are only possible at that screen size, and the Xperia Touch has to be 25 centimetres away to make that work. Moving it further away, it can go up to a maximum of 80-inches. Naturally, a white wall, table or surface offers the best canvas for projecting. 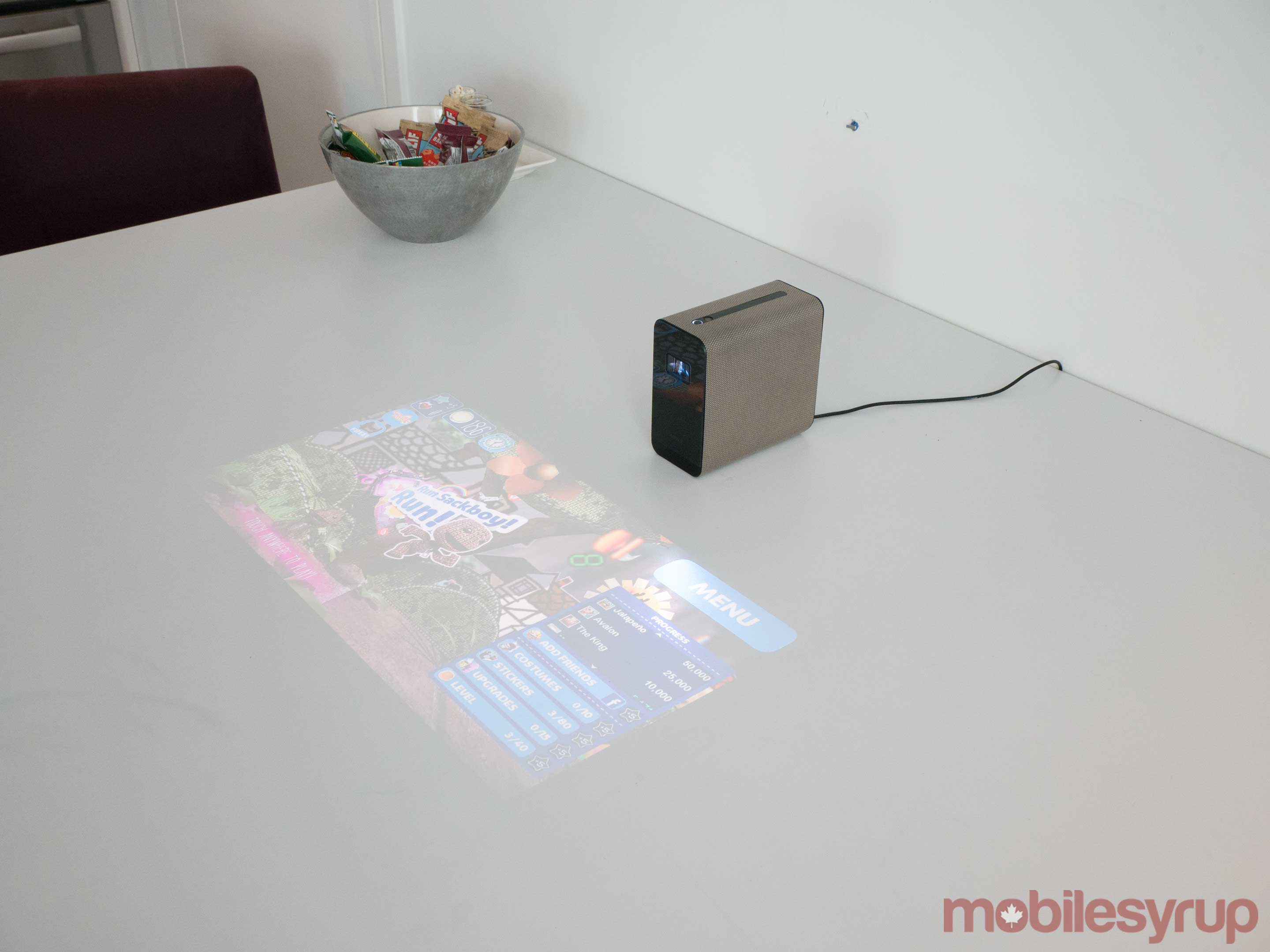 Resolution tops out at 1280 x 720 pixels, which is good for a projector at this size, though is the same as the ZTE Spro 2 pico projector that came to market in 2015. Unlike that device, however, the Xperia Touch has no onboard touchscreen. Additionally, it can project a limited display of the time and other things, like handwritten notes, in what would otherwise be a lockscreen.

The touch sensitivity was surprisingly good, and assuming that it’s going to be refined even further, playing games on a table shouldn’t be a problem, provided there’s enough shade to illuminate the screen. 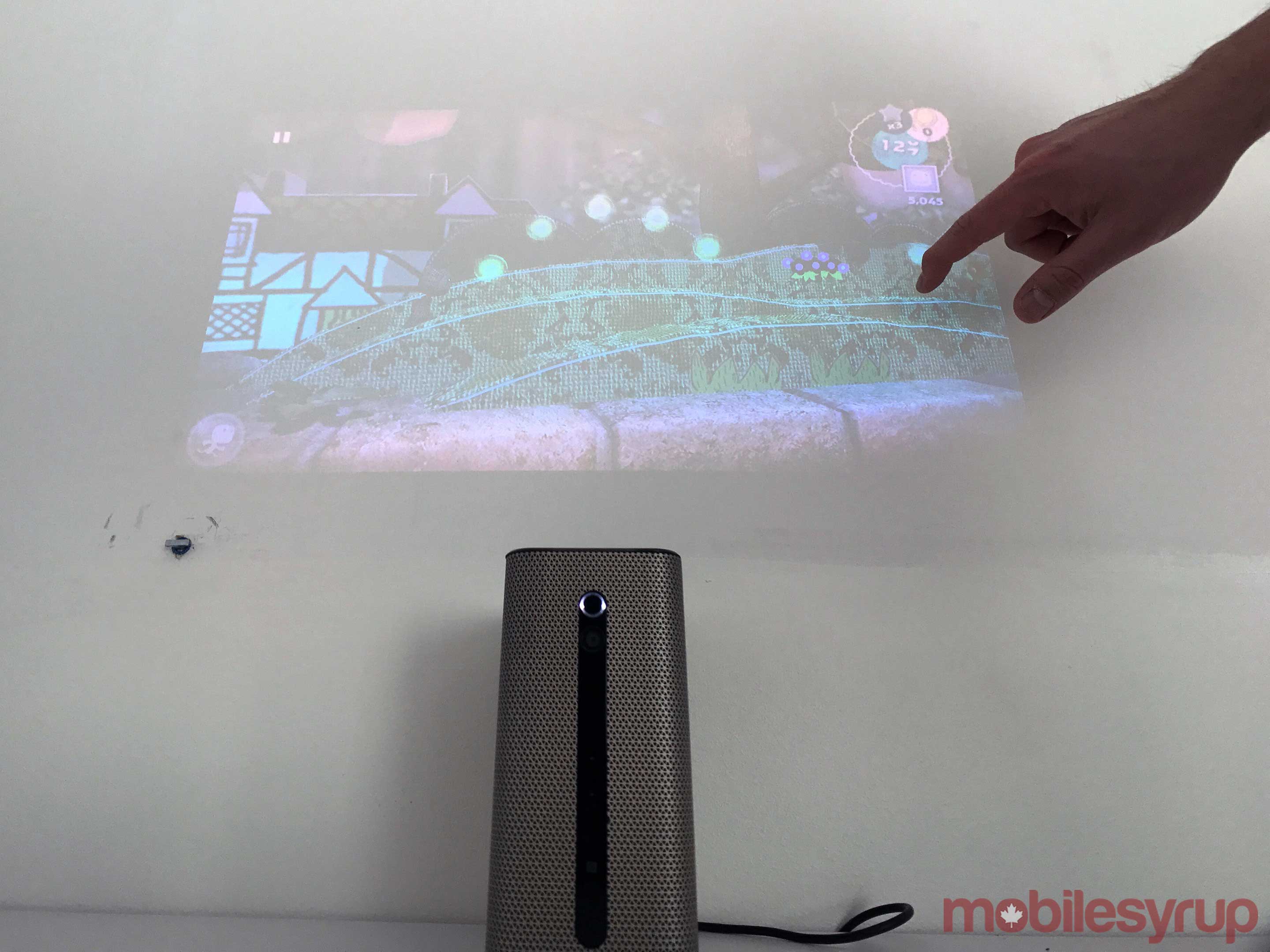 There’s 32GB of internal storage, with a microSD card slot to expand that up to another 256GB. Technically, it could probably handle up to 2TB cards, though Sony probably won’t say that publicly.

Built-in voice control allows the Xperia Touch to respond to voice commands. Since the demo we saw was running on 6.0.1 Marshmallow, it was running Google Now, but Sony reps indicated that it may feature Google Assistant instead at launch.

The built-in speaker isn’t bad, though pairing a Bluetooth speaker with Touch can take the overall volume and audio fidelity to a different level. There’s no Aux-In for wired connections to external speakers, but there is a micro-HDMI port to make it work with a monitor or TV. 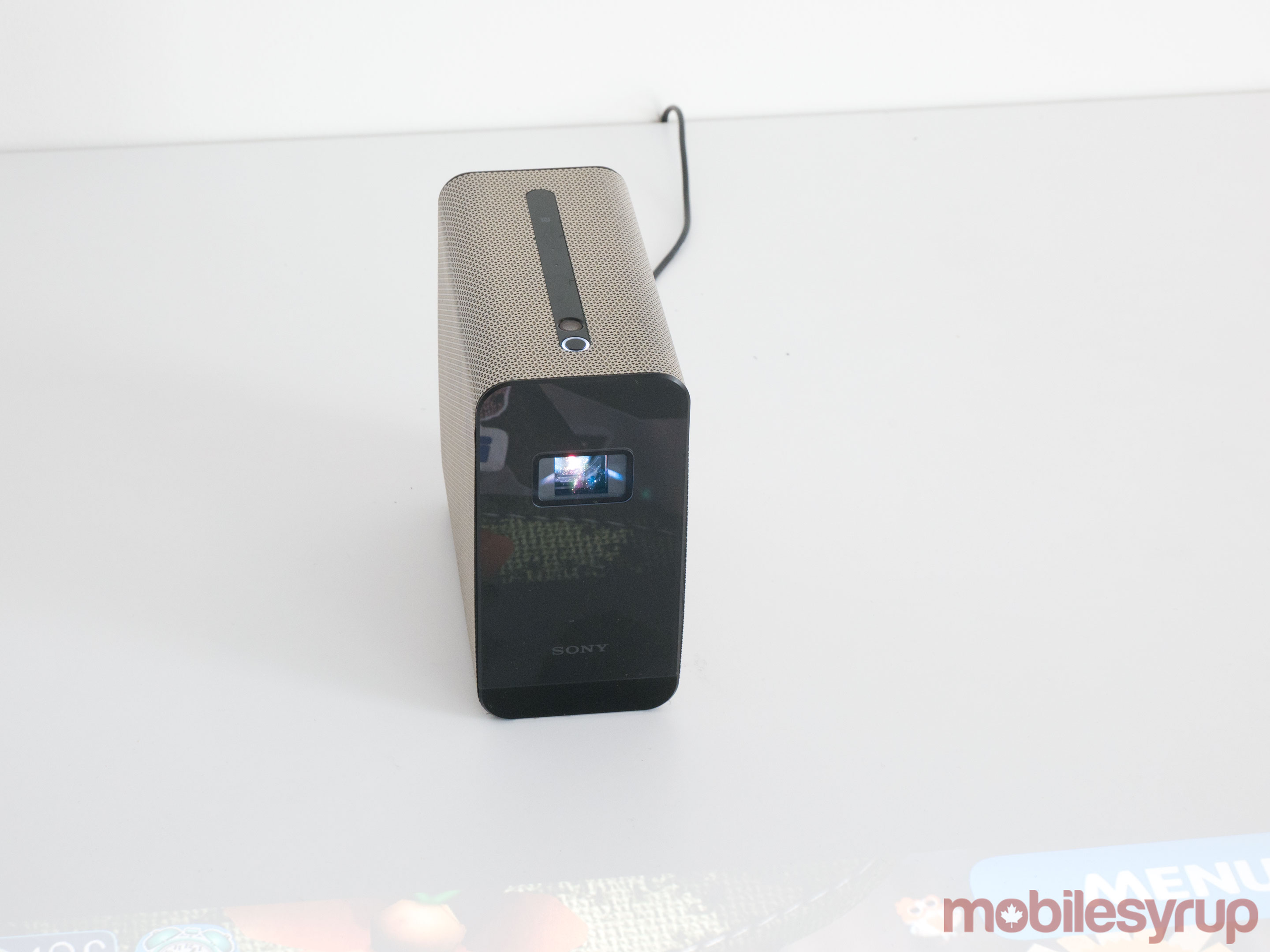 The openness of Android is such that other use cases are possible. Voice chatting over Skype or another video chat app should be easy enough, especially with the projector’s camera staring at you.

Playing games with a PlayStation 4 controller paired with the projector. Following a recipe beamed onto a countertop or kitchen table. There are countless other examples, so if you can do it on a tablet, you can probably do it on the Xperia Touch. 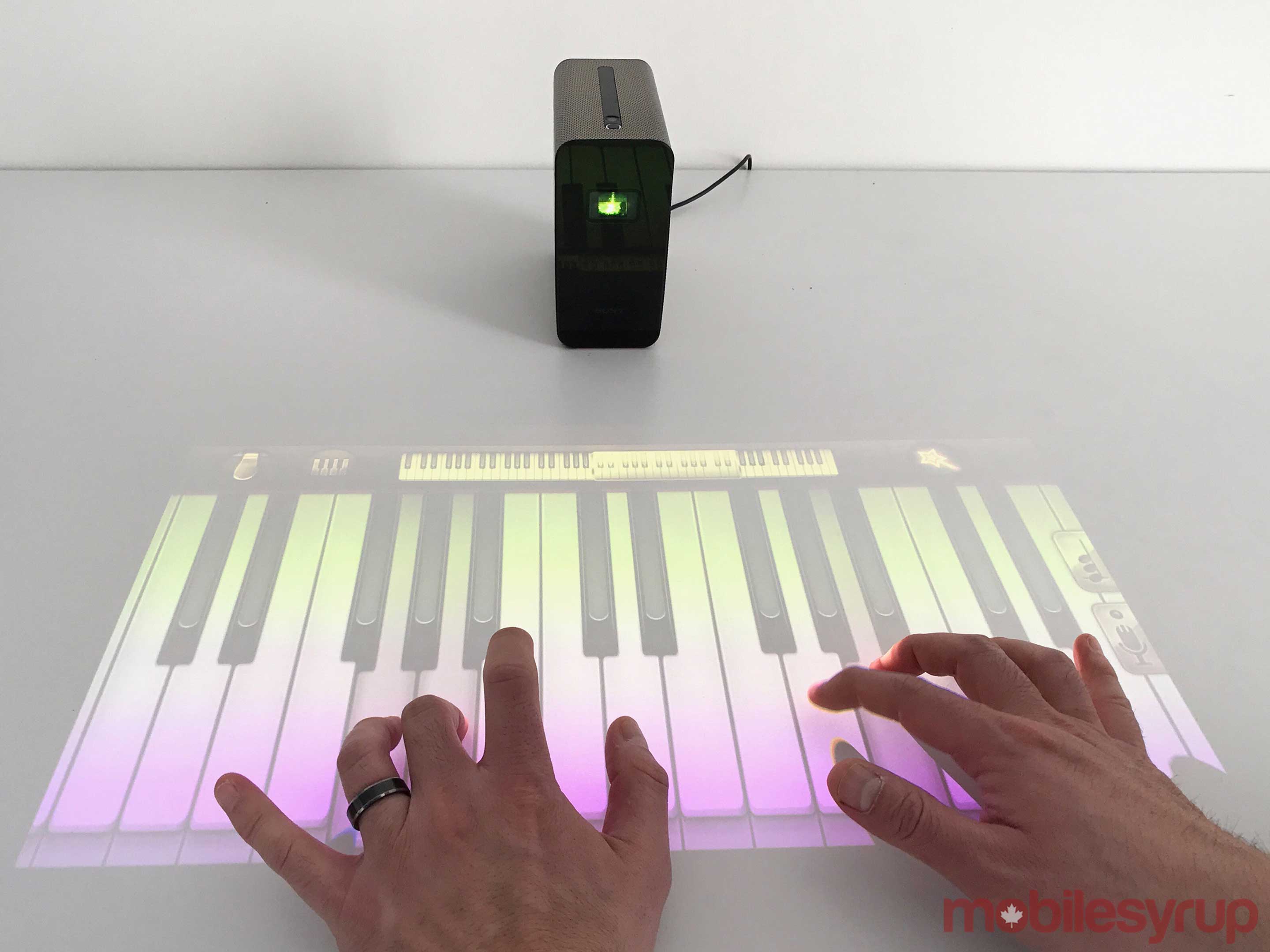 A perforated chassis is meant to increase air circulation to quiet the fan inside. It’s certainly not silent, yet not a buzzing machine, either. The battery inside can run the projector for up to an hour, so watching a movie wirelessly isn’t going to be possible. In most instances, the Xperia Touch will probably be a stationary device that needs to be plugged in, especially for longer playback.

Xperia Touch will only be available in the grey metallic shade, and will first hit Japan and Europe before it eventually comes to Canada. Sony says it will be this year, but it’s not clear when that will be.

It’s set to hit Europe as early as the summer at a price point of 1,499 Euros, which would likely put the Canadian price point closer to $2,000 based on conversion rates. That’s expensive, to say the least, which means this device won’t be in the affordable category when it finally drops.