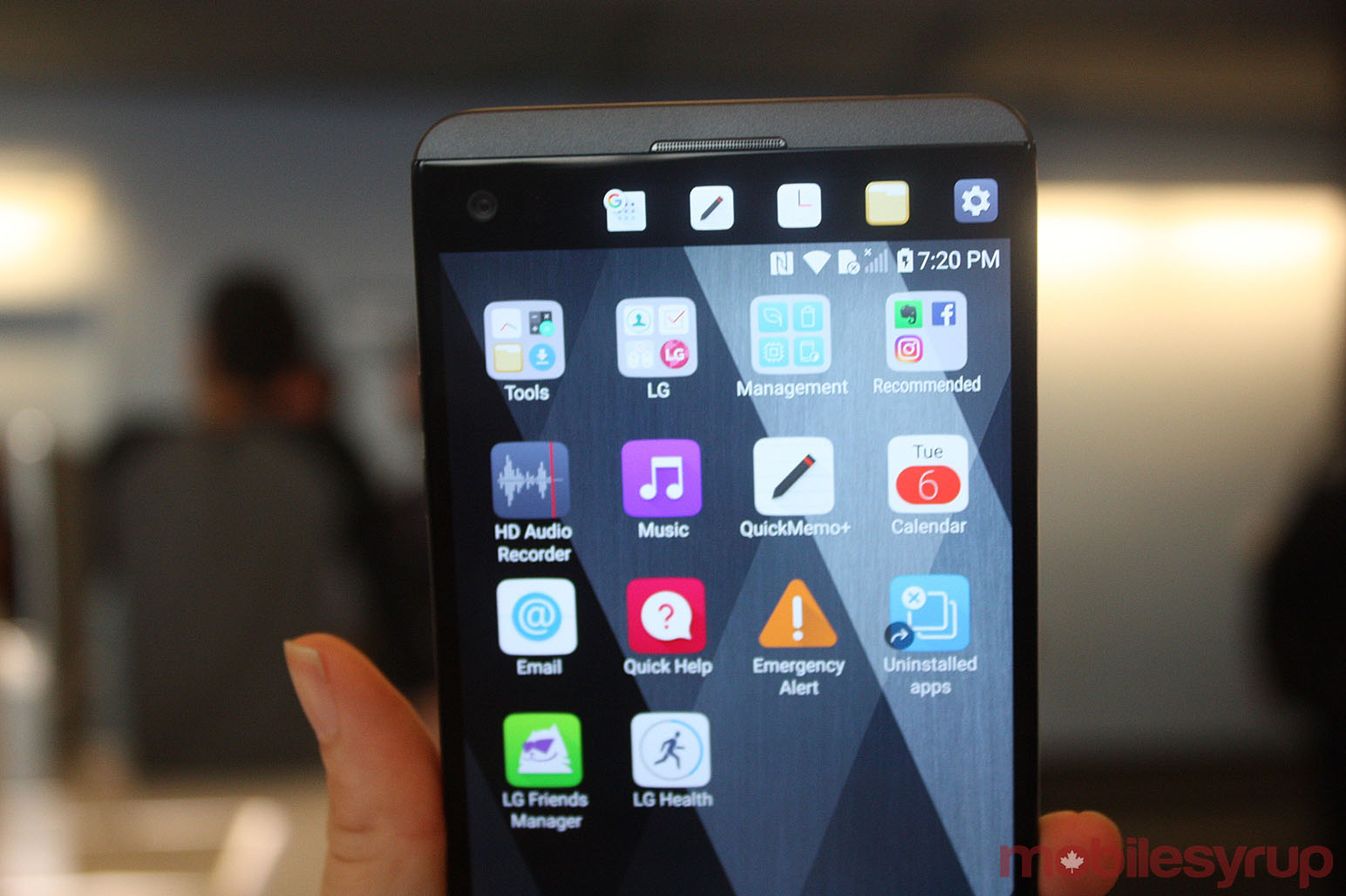 On the eve of the inevitable media circus that is an iPhone unveiling, LG announced its latest smartphone, the V20, an impressively-specced device that carries a generous amount of firsts.

Not only is it the first device to come preloaded with Android 7.0 Nougat and Google’s new ‘In Apps’ phone search function, it’s also the first smartphone to feature a 32-bit Hi-Fi Quad DAC, short for digital-to-analog converter.

This means for buyers with good wired headphones, audio will sound better than other smartphones currently on the market. At the unveiling event, I was able to test out audio quality both on my own Bose Quiet Comfort 15 headphones, and on a pair of Quincy Jones Reference Headphones Q701 that were supplied by LG to compare the V20’s audio against that of the most recent iPhone. 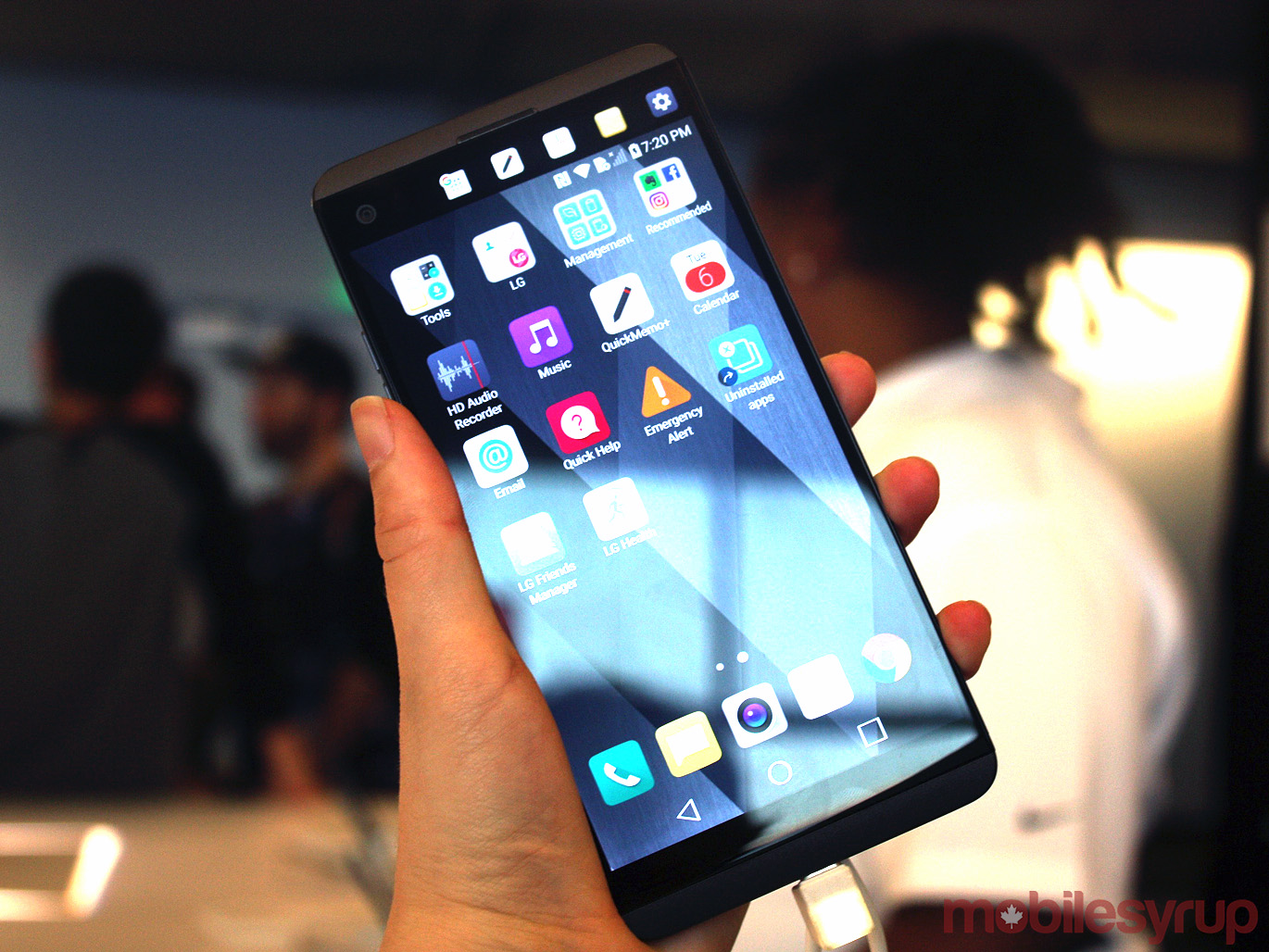 Both were impressive, showing surprising depth and articulation. The quality of sound in my Bose headphones was the best I’ve ever experienced, and I was able to pick out little moments, like a drumstick hitting a cymbal, with more precision on the V20 than with the Apple device. I must admit, however, that it took me a considerable amount of switching between phones to really appreciate the difference. This is a feature for true audiophiles.

I put this to the test by trying out the HD Audio recorder in a room full of journalists loudly taking videos of themselves, and it fared well, all things considering. My voice was separated and pushed to forefront, while everything else was relatively muted.

The V20 also boasts a premium camera with several features that could make the device a future favourite with photography enthusiasts. The dual camera setup — on both front and rear-facing cameras — allows for wide-angle photos, a benefit I didn’t know I craved until I started using it.

The 5 megapixel front camera has a 120-degree lens, while the 8 megapixel and 16 megapixel rear-facing cameras have 135 degree and 75-degree lenses, respectively.

This seemed to play a part in the sheer speed with which the device focuses and snaps gorgeous auto-mode pictures. The camera also loads quickly from locked and performs exceptionally in low-light, with its f/1.9 aperture front camera and f/1.8 OIS and f/2.4 aperture rear cameras. 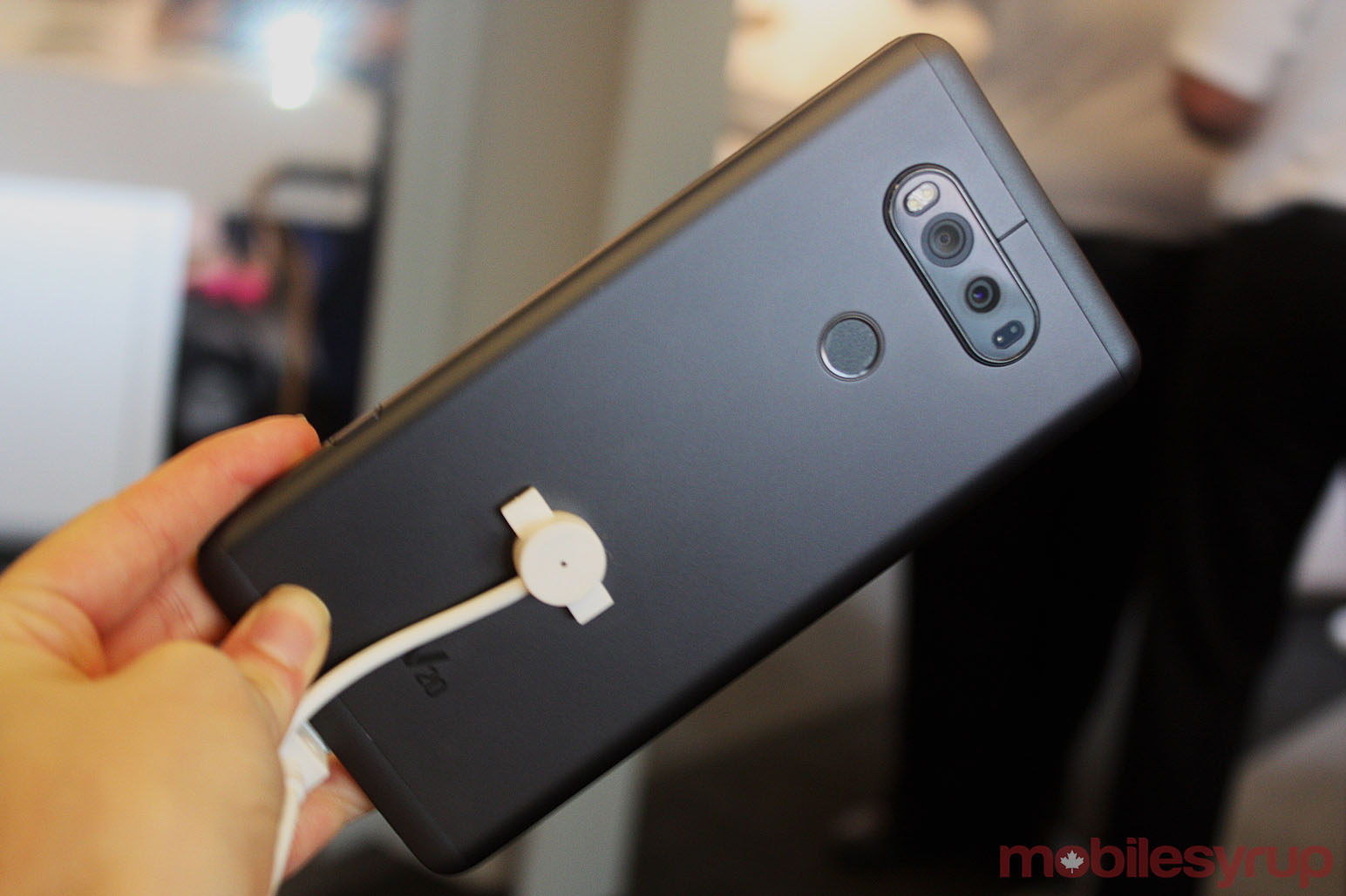 For video, LG is touting a feature it calls Steady Record 2.0, which leverages the electronic image stabilization (EIS) 3.0 technology of the provider of its Snapdragon 820 chipset, Qualcomm. This, says LG, reduces sync latency to 50 milliseconds. The stabilization process is then further improved by digital image stabilization (DIS) in post-processing.

This too works surprisingly well. After intentionally jiggling my arms around while filming, in a manner that would’ve destroyed the video quality on most any other device I’ve used recently (ZTE Axon 7, Moto G4 Plus), the video I took stayed fairly centered and stable.

As mentioned above, the V20 stocks a Snapdragon 820 chipset. It also has 4GB of RAM, 64GB of ROM (expandable up to 2TB) and supports X12 LTE. All this runs on a 3,200 mAh battery, removable by popping off the rear metal casing by use of a small release button on the side. It’s a slightly awkward process, but less so than the LG G5. 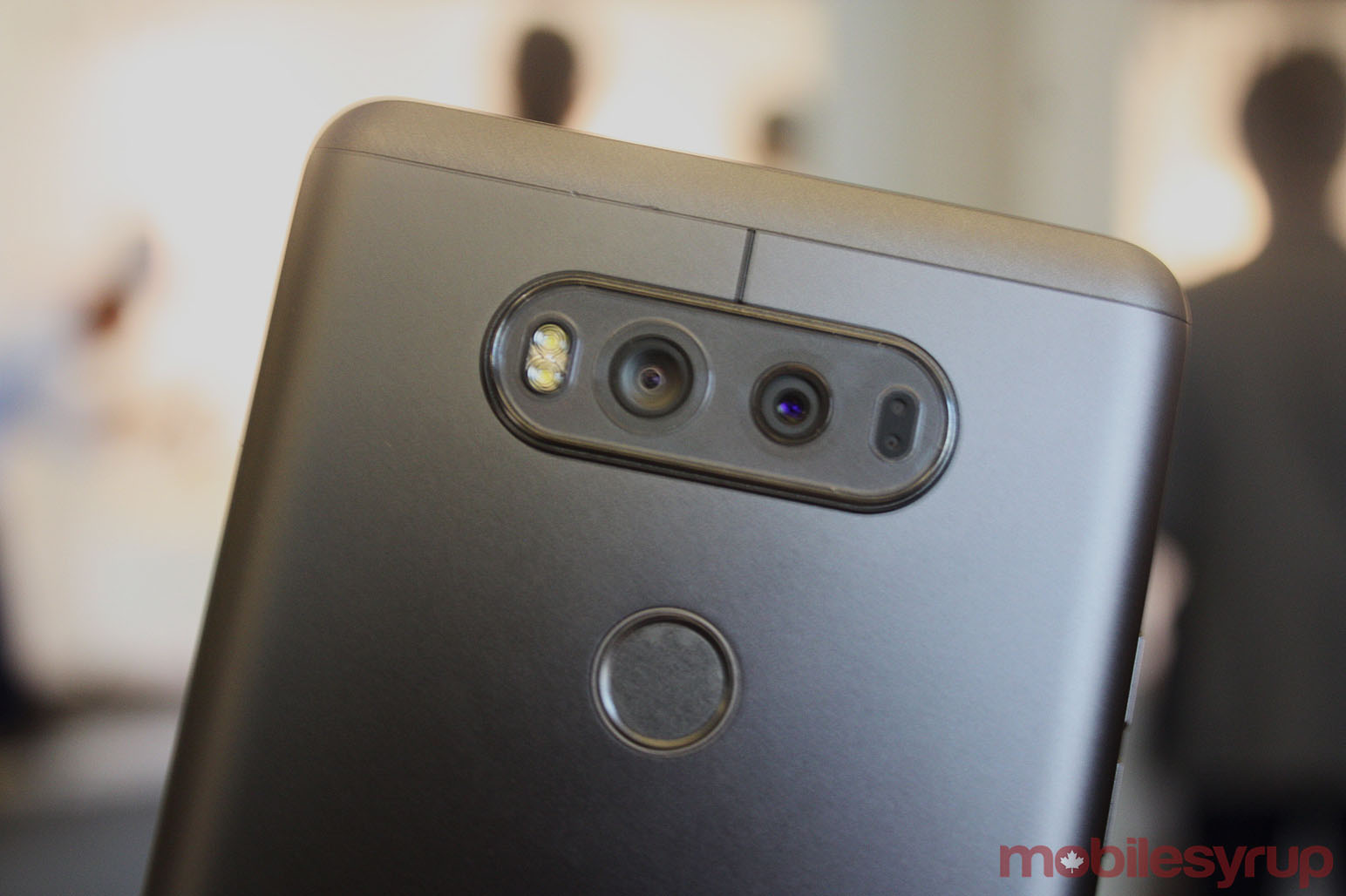 As for appearances, the 5.7-inch display device feels incredibly light, even at a not-insignificant 174 grams, and feels slim for its dimensions of 159.7 x 78.1 x 7.7mm. It has a circular fingerprint sensor positioned on its back.

The phone’s QHD IPS 2560 x 1440 pixel quantum display is crisp and vibrant, rivalling Samsung in its immediate ‘wow’ factor. Then there’s the matter of its so-called ‘secondary display,’ the small always-on ticker that runs along the top of the phone and was also a notable aspect of its predecessor, the V10.

The goal appears much the same as Samsung’s edge — a part of the phone dedicated to showing the clock and essential notifications, which never needs to be turned off, and which adds functionality when turned on by providing handy shortcuts.

While I’m still not convinced at the necessity of this concept in general, I do feel it works better as a screen above the display, rather than on the side, where it can be harder to navigate. 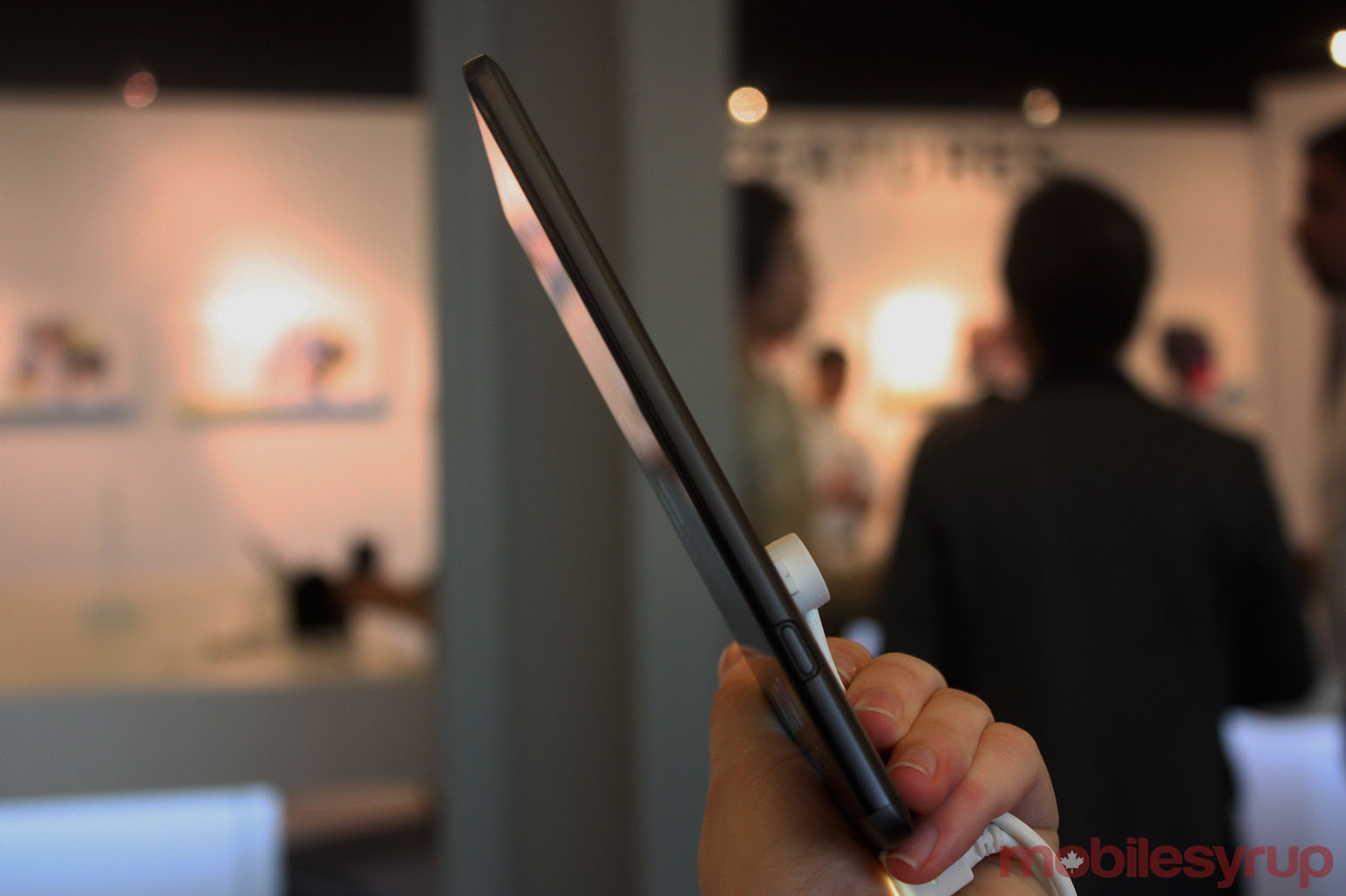 Being shipped with the brand new Nougat is an added bonus for the V20, though LG’s UX 5.0+ skin retains many of the unique and often irritating quirks of the previous version, 5.0.

For instance, enabling the app drawer is a multi-step process in settings. All in all, LG’s undignified skin makes it a rather unfortunate launch partner for Nougat.

Another Google innovation that made its launch on the phone is In Apps, a new search mode in the Google app that lets users find content within installed apps on their phone. It works well, turning up a wide spread of information in a timely manner.

The all-metal device will be available in ‘Titan’ in Canada, though pricing and availability have not been made clear yet. What we do know is that the V20 will first be made available in Korea starting this month “followed by other regions,” and that more information will be announced in the weeks to come. Considering the specs, the device is likely to cost just as much as the LG G5, if not more.

A full review of the LG V20 will be posted on MobileSyrup in the coming weeks.