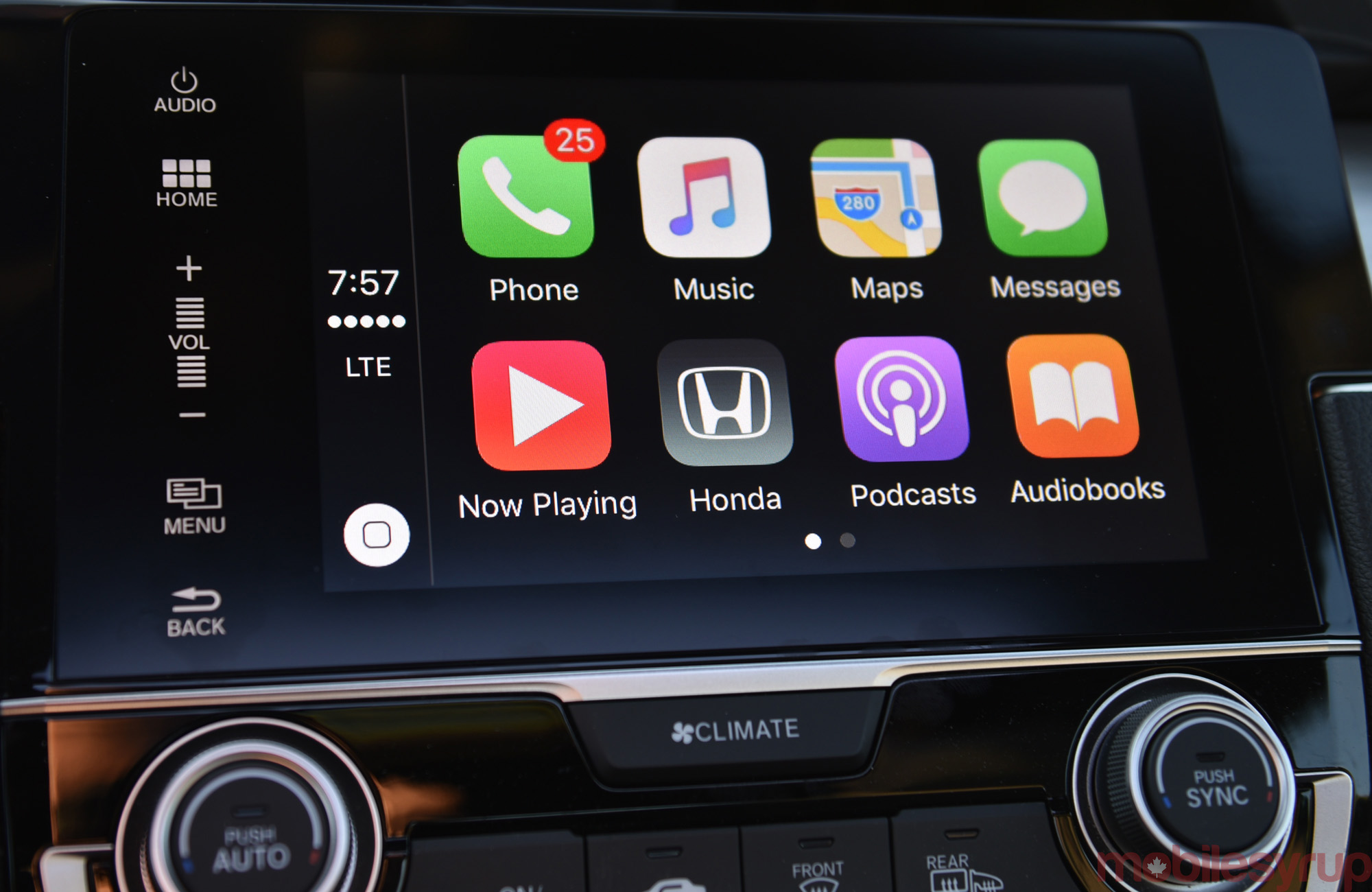 The Honda Civic was the best-selling car in Canada in 2015, marking the 18th straight year it earned that distinction. The Civics that hit the road this year have the latest infotainment system that includes full support for Apple CarPlay and Android Auto.

Honda brought the two platforms into the Accord line last year to mesh with its own HondaLink system, yet opted not to do the same for the Civic, which had come to market earlier.

I drove a 2016 Civic Coupe for this review, which utilizes the same exact head unit screen and layout as that used in the Accord. Incorporating the two platforms into its own system, Honda is making a commitment to offer something it otherwise couldn’t, but the automaker has to do something to make HondaLink stronger than it currently is. 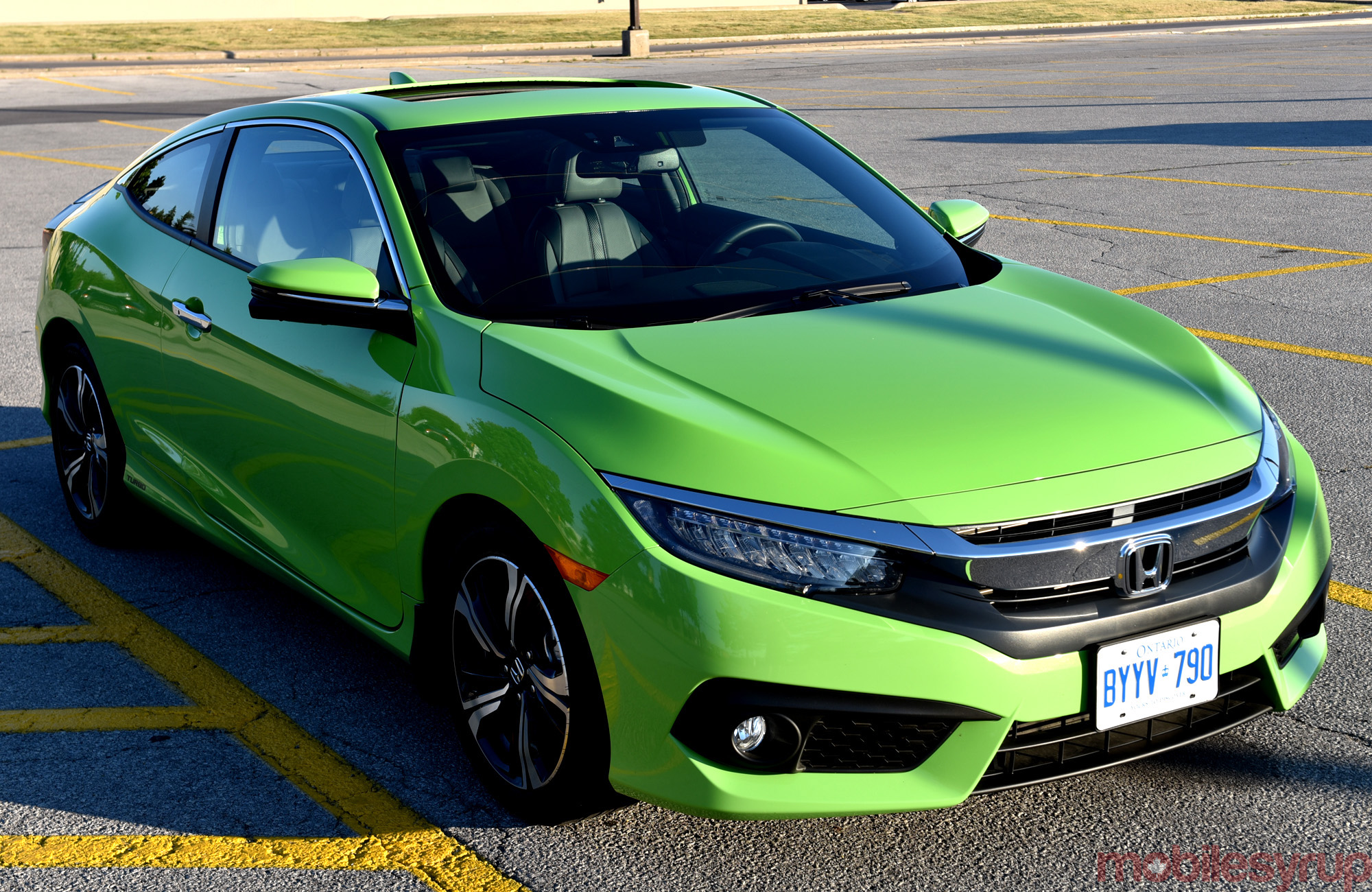 On its own basis, HondaLink is deeper than it appears. The system now uses a capacitive touchscreen, and is specifically designed to weed out legacy devices. Hence, the iPhone 4s and earlier no longer work when plugged in, except for listening to music and phone calls. Neither CarPlay nor HondaLink Next Generation apps will work with those phones.

HondaLink Next Generation refers to an app-based integration introduced last year as a way to enhance the existing system. It only works with the iPhone 5 and later, and is not compatible with any Android devices because they can’t do MirrorLink, and thus, can’t work with Honda’s Display Audio System.

By adding CarPlay and Android Auto, this setup is shifted, putting HondaLink closer to its roots as a customer support tool for setting up appointments or getting help in real-time from a representative in case something goes wrong. The functional add-ons include soft keys to unlock the car and pushing GPS routes to the car, among other things.

Beyond that, there isn’t much that has changed, and it appears, on the surface at least, that Honda is letting Apple and Google handle third-party app integration, given that Aha Radio is the only one that is natively built-in.

As was done previously, there is native support for Siri Eyes Free through the voice activation button (with a long press) when the iPhone is plugged in or paired via Bluetooth. Google Now doesn’t work the same way, but is fully integrated when Android Auto is running. 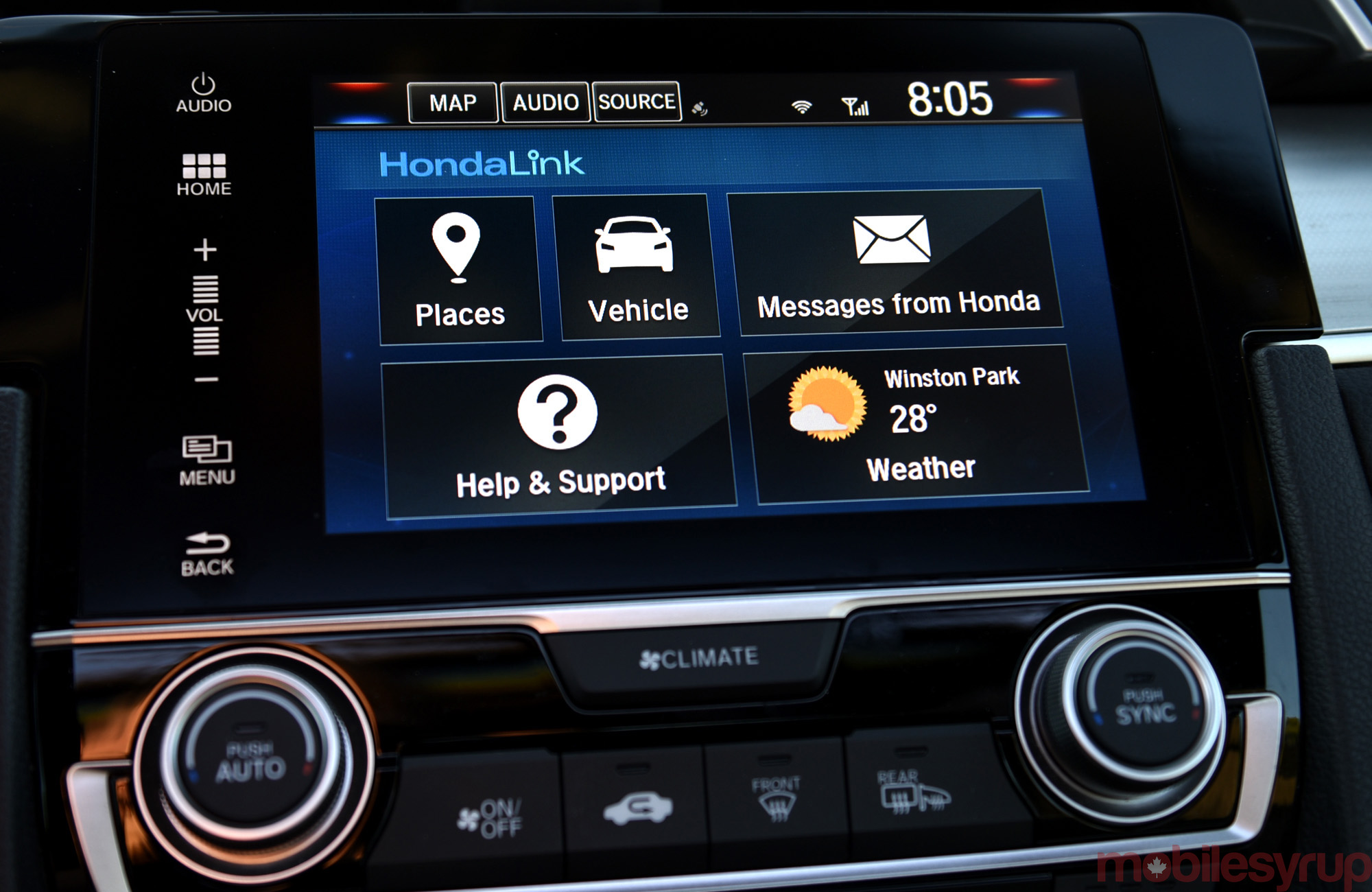 The biggest change here, obviously, is the inclusion of CarPlay and Android Auto, presenting the two burgeoning projection platforms onto the 7-inch head unit display in one of the most popular vehicle models. More on that later.

There were two USB ports, though only one is a dedicated smartphone port, and in the Coupe, it was under the dash in an open awning. Strange design, but understandable, given the real estate confines. A wireless charging dock is another reason for that, since it takes up the area where the USB port used to be. It’s a Qi mat, though it only worked for charging, meaning I wasn’t able to use the phone as if it was plugged in to the system, like BMW did with its 7 Series.

The other USB port was inside the storage compartment in the middle console, along with a 12-volt socket and Aux-In jack. Bluetooth is, of course, fully standard in the Civic, and with Siri Eyes Free, it’s possible to tap into Apple’s voice assistant while the iPhone is paired. A simple press triggers Honda’s own voice assistant, offering an entirely different set of built-in commands.

Honda has also included climate control by voice, a feature that fewer automakers have than is probably realized. Turning on the air conditioning or heating, and specifying a temperature doesn’t require fiddling with any physical controls, except the way in which the voice activation works made me wonder how much time I was really saving going that route.

A camera is attached to the right rearview mirror, and its live view appeared on the 7-inch display every time I signalled to turn right, overlapping whatever was on the screen at that time. Unusual in that I’ve never driven a vehicle with a camera there before, but it was still a cool thing to have. 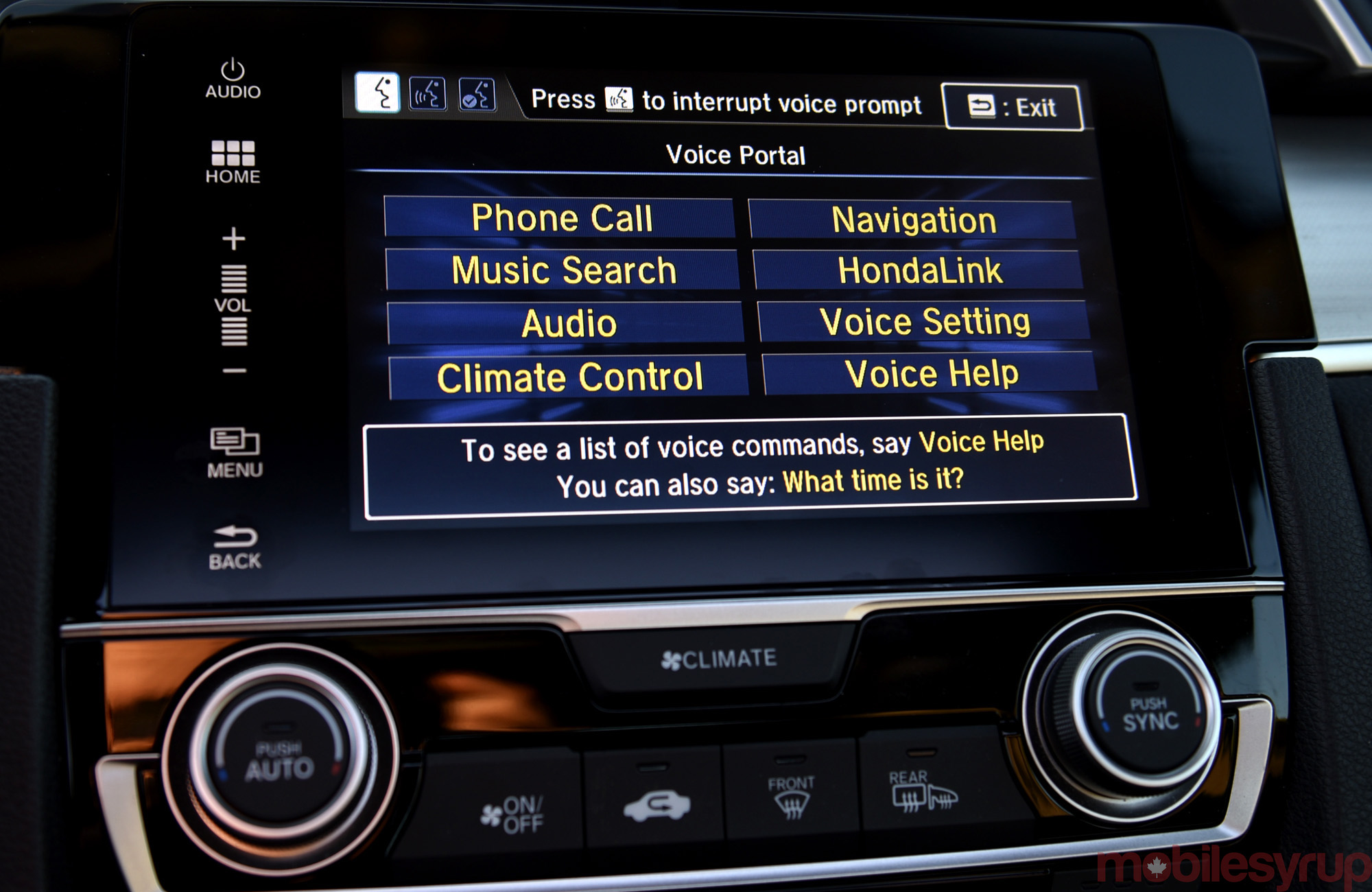 The setup for CarPlay and Android Auto was no different here than it was with the Accord previously. Both platforms are set up in such a way where the respective phones are also added as Bluetooth devices to pair with HondaLink in cases where you don’t want to plug in.

As noted earlier, wireless charging isn’t integrated as an input, so the only functional purpose it can serve while lying down and getting charged is when paired via Bluetooth. Android Auto can’t work that way because it needs a wired connection. Same with CarPlay because Apple still hasn’t released wireless CarPlay. It would naturally be redundant to place the phone down on the mat while also plugged in via USB. Plus, there’s no real room to do that anyway.

One major caveat to having CarPlay and Android Auto is that their respective voice assistants supplant the factory one. Be it a short or long press, Siri or Google Now will perk up instead of Honda’s monotone assistant. That may be fine for phone calls, but it negates commands for in-car climate and HondaLink Assist that are native to the factory system. Tapping on the HondaLink app on CarPlay (it’s the icon on the bottom right in Android Auto) and then trying the short press didn’t work. I had to unplug the phone entirely to make that happen, or disable the platform through the HondaLink settings, neither of which made practical sense while driving.

It’s this sort of scenario that has probably contributed to the angst automakers have felt in allowing Apple and Google into their dashboards. Once either of their platforms are live, the factory portion not only plays second fiddle, it’s almost as if it ceases to exist in any meaningful way.

While streaming music through Bluetooth was completely fine, and phone calls were well done, the rest of HondaLink was easy to ignore otherwise. Navigation is okay, except Google Maps can now integrate offline maps through Android Auto. CarPlay defaults to Apple Maps, which may not be preferable for some users, but considering they get updated faster than the factory system’s navigation maps, it’s an easy sell.

The one advantage HondaLink has is in how the app can push directions to the car. The Civic has a built-in SIM with Wi-Fi as well. It’s not used to offer a car-only data plan like other automakers have been doing. Rather the SIM is embedded to communicate with the app to do things like unlocking or locking the doors, honking the horn or requesting assistance from Honda directly.

It appears that HondaLink may be Android-based, in and of itself, as is evidenced by the App section. Here, it is possible to load APK files, making it technically possible to put YouTube, Netflix and other apps on the unit by loading them from a USB stick. I didn’t really go all out in testing it, but I can confirm that video won’t work without the car being in park. 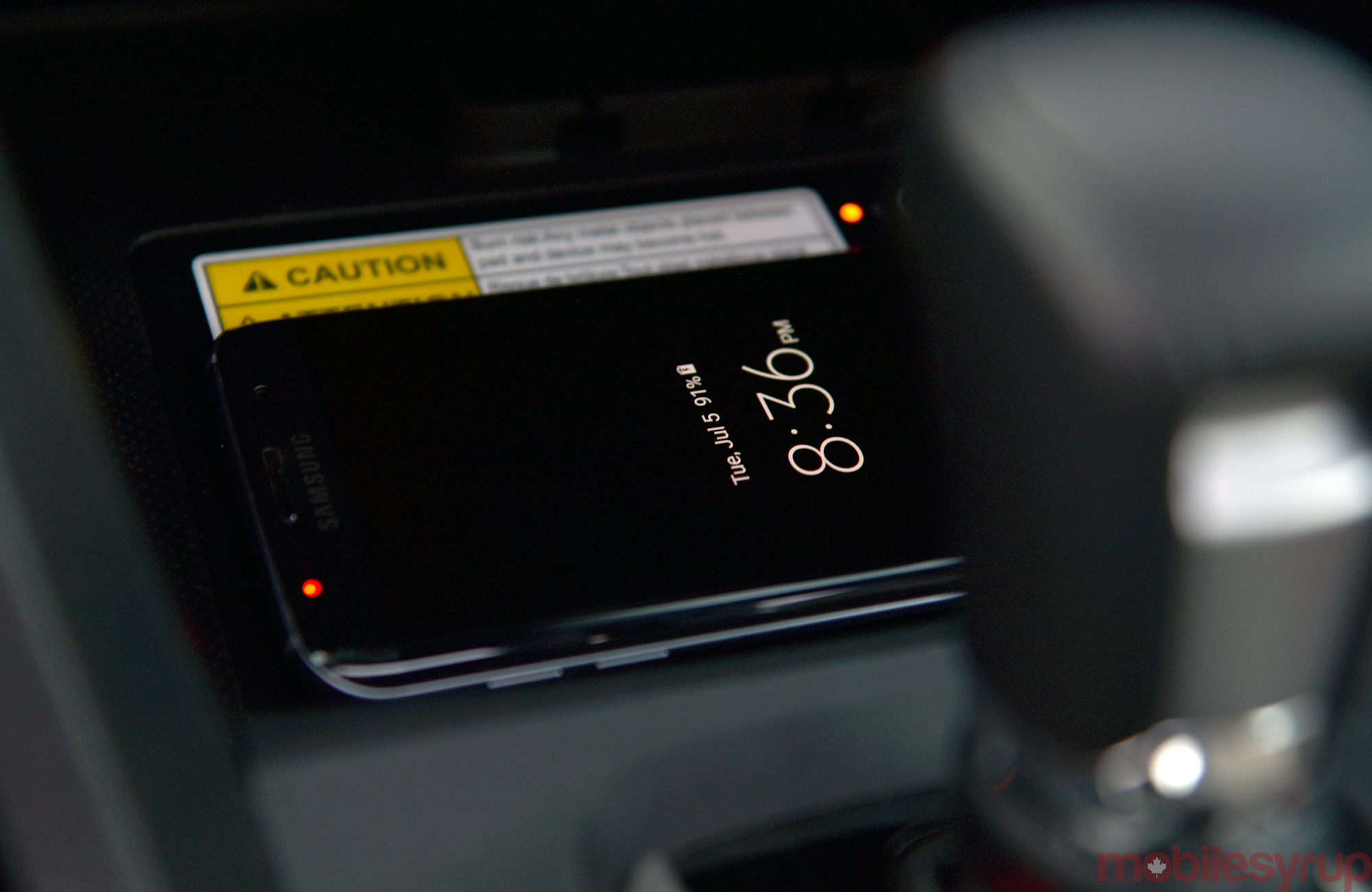 Little has changed in either case with music and phone usage. Audio streaming was very user-friendly once my phone was paired. Playback through CarPlay or Android Auto was also pretty standard, good and bad.

As I’ve noted in previous reviews, Spotify continues to have an issue where playback is stifled if the app has been frozen for too long — an issue that plagues the iOS version more than the Android one. And while playlists, artists and albums under Your Music are readily available, Android Auto still leaves out songs. If there was a song I saved, but didn’t add to a playlist, I would have no way of seeing it unless I looked for the album or artist. Such an omission doesn’t make sense.

Moreover, there is still the 20-song limit in the menu layout for a playlist, making navigation a terrible experience that is anything but safe. Google Play Music has the same thing, as does TuneIn, so it’s a restriction baked into the platform. CarPlay doesn’t do that, allowing a full playlist to be scrolled through at will. Not the safest method, perhaps, but it’s there at least.

Android Auto does at least offer voice-activated app launching. I could start up Spotify with a shuffle of music by just telling Google Now to ‘play music on Spotify’. The same could happen with Google Play Music. TuneIn would default to the last radio station played. As nothing has been indexed, it wasn’t possible to dig deeper and request a specific song, artist or playlist. Only with music files stored on the device, could that be done.

And that includes HondaLink, which is able to scour for songs in “iPod mode”. Yes, iPod mode. An iPhone doesn’t fool it, though I did find some success when putting it in airplane mode. 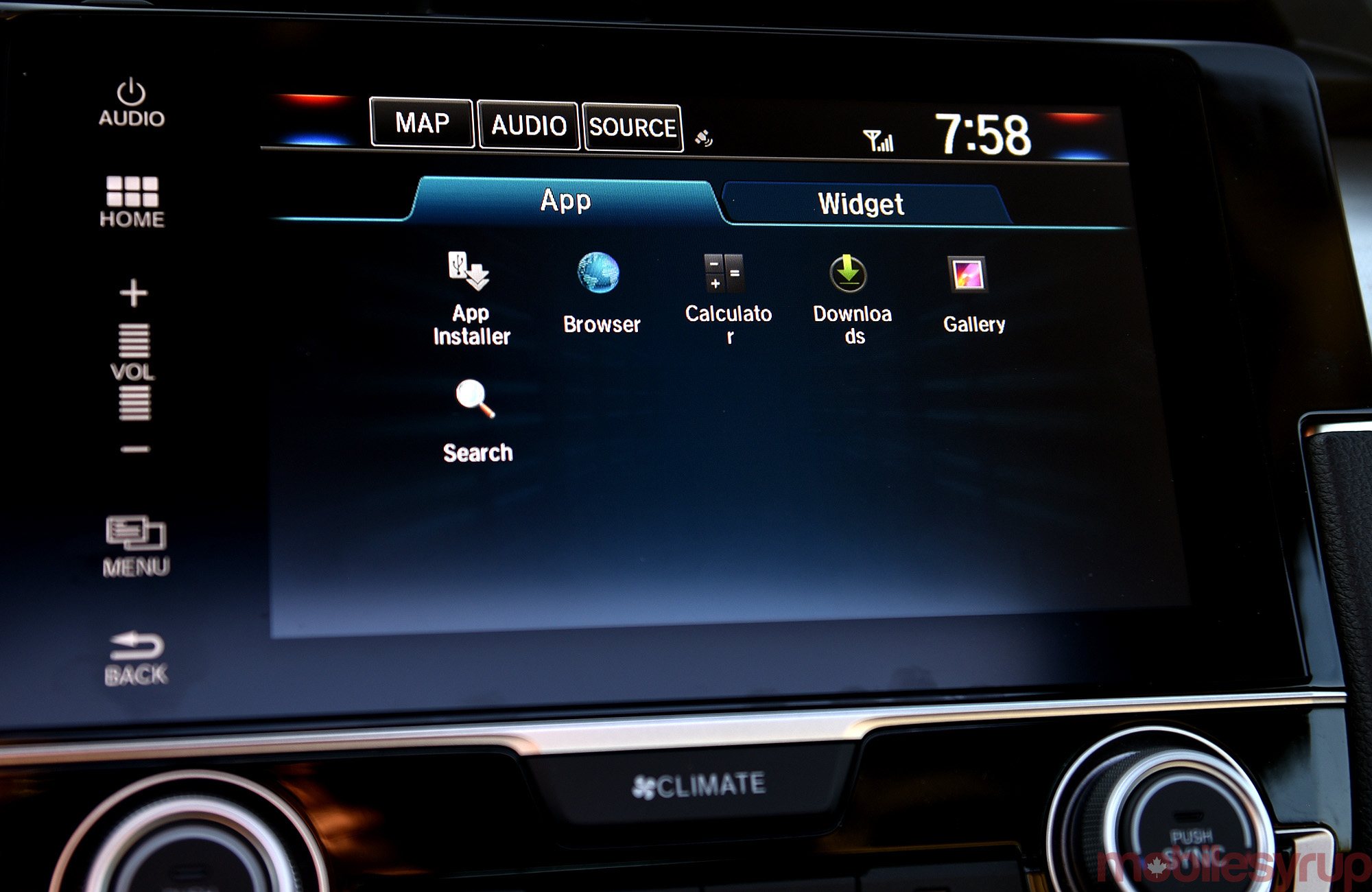 Like the Accord, the Civic gets an infotainment boost with the addition of the two most viable in-car software platforms to date. The fact they so effectively usurp HondaLink’s own features is a testament to the dashboard digital divide that has existed for years between the automakers and consumer electronics companies.

That divide may slowly become a conquering reality unless Honda can support both platforms with integration and features that, in practical terms, would make it more of an equal partner. That’s Honda’s challenge, whereas, for its customers, the addition of these two into the Civic is a major boost in smartphone integration for a vehicle that is among the most common on Canadian roads.