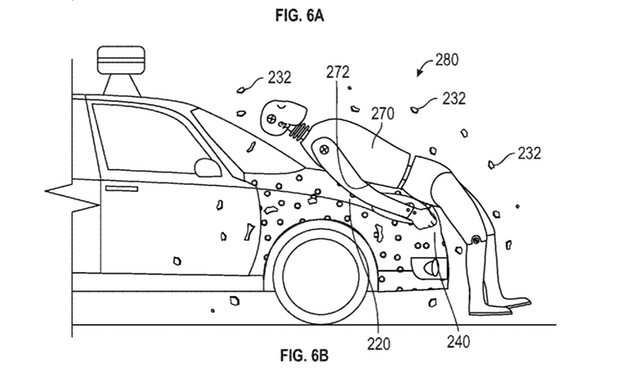 Driverless cars are the future, but that future is likely years away and along with it comes the potential for accidents, some likely involving pedestrians.

In a patent filing that seems equal parts insane and genius, Google envisions a product it describes as “an adhesive layer positioned on the front end of the vehicle,” that sticks to pedestrians in the event of a crash.

While silly sounding at first, the technology actually makes sense given most crash related injuries involving pedestrians are not caused by the initial collision. Instead, the majority of injuries occur when a pedestrian is thrown to the ground or into another obstacle, after being initially hit by a vehicle.

Still, having a sticky surface attached to the front of your vehicle is far from ideal given it will also pick up dirt and bugs, along with pedestrians. As expected, Google has thought about this issue and plans to create what it calls an “eggshell” exterior that covers the adhesive layer. Similar to the concept of an airbag, this layer would break instantaneously in the event of a crash. ‘