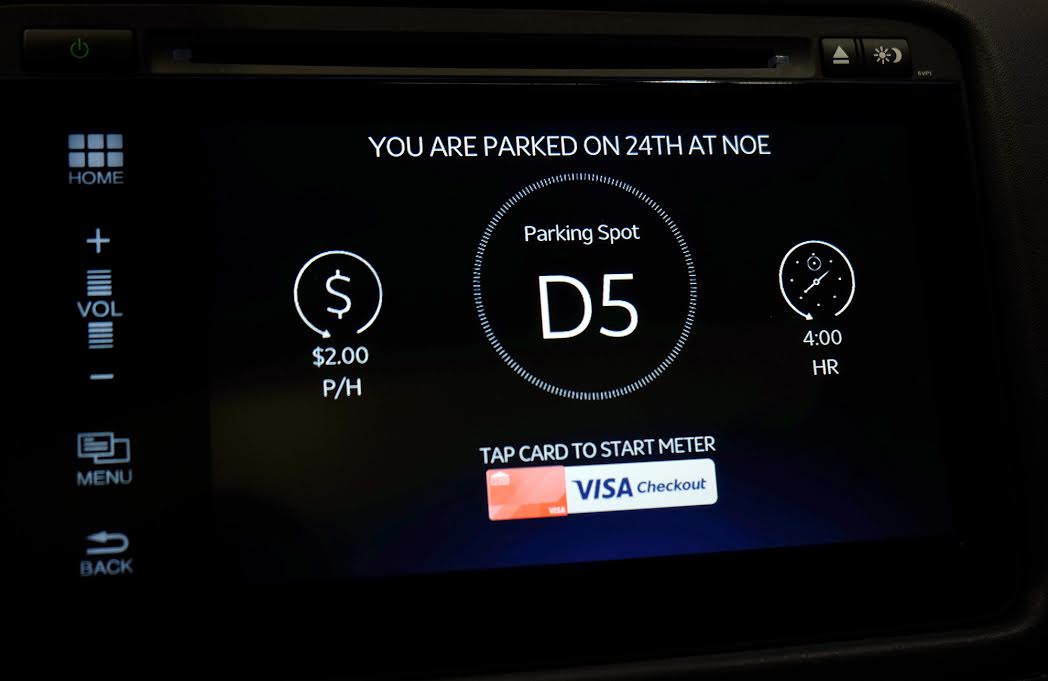 Visa demonstrated new ways drivers can pay for gas and parking through apps that use its Token Service and Checkout online payment service, at Mobile World Congress 2016 in a concept car on the show floor.

Using a Honda Developer Studio concept car, the demos were integrated in the vehicle’s head unit, communicating with its sensors to report related details. Whereas last year, Visa showed a proof-of-concept on in-car fast food purchasing, the focus at this year’s show was to zero in on the gas and parking experience. 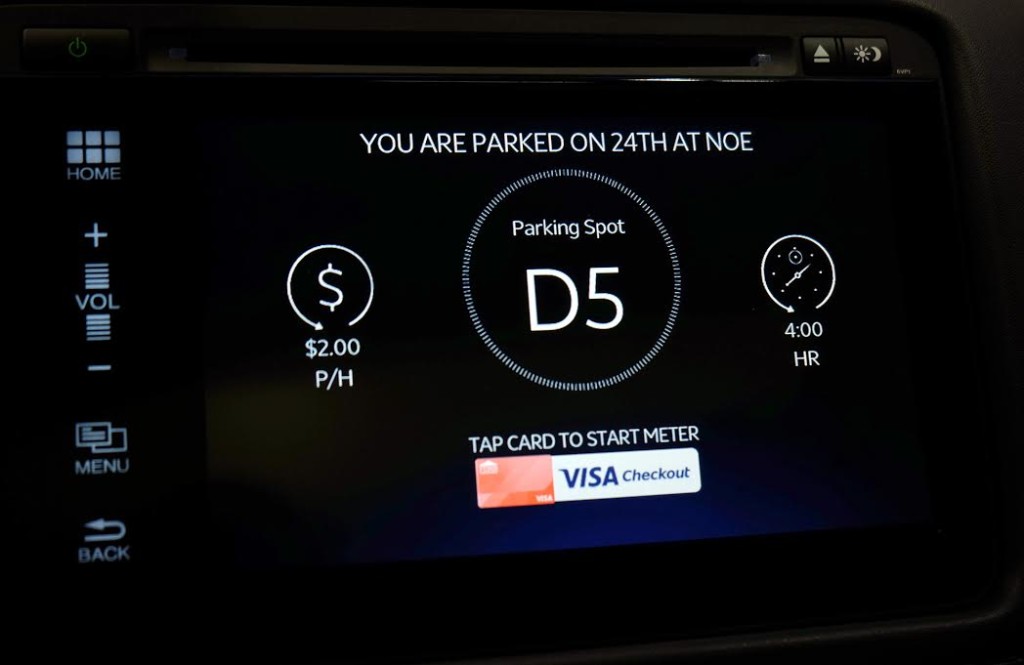 With gas, the car’s sensor tells the fuel app that the tank is getting low and might be time to fill up. Normally, the in-car voice activation system kicks in to say so, but with all the background noise on the show floor, this part of the demo was turned off.

It then displays four of the closest gas stations on the head unit screen, where drivers can choose one and get navigation directions. Upon arrival, a beacon at the pump talks to the car and indicates the pump number they parked at, negating the need to input any information or location-based data to confirm. 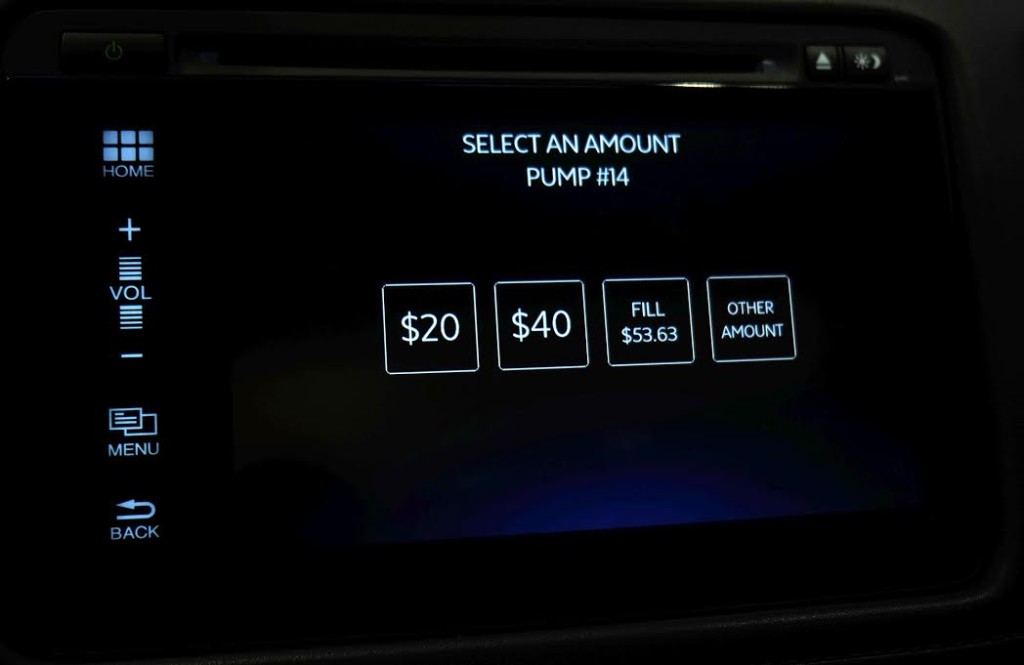 Currently, paying for gas with a credit card at the pump usually puts a hold on it because the card issuer or bank doesn’t know much gas is going into the tank. The sensory technology and app would get around that by computing an approximate amount needed to fill up, simply because it keeps tabs on both the gas level in the car and real-time price of gas at the pump. This way, only the amount required is allocated to the pump, removing the need for drivers to guess or have a temporary hold on the card.

For gas station owners, there is an advantage in that they can more easily bundle margin-friendly convenience store items by offering them directly on the head unit display before even arriving at the station. Drivers can choose what they want, and have a clerk bring the items out instead of having to go in and pick them up, all paid for in advance with the gas. The only thing drivers have to do is actually pump the fuel into their vehicle, unless it happens to be a full-service station (not too many of those around anymore). 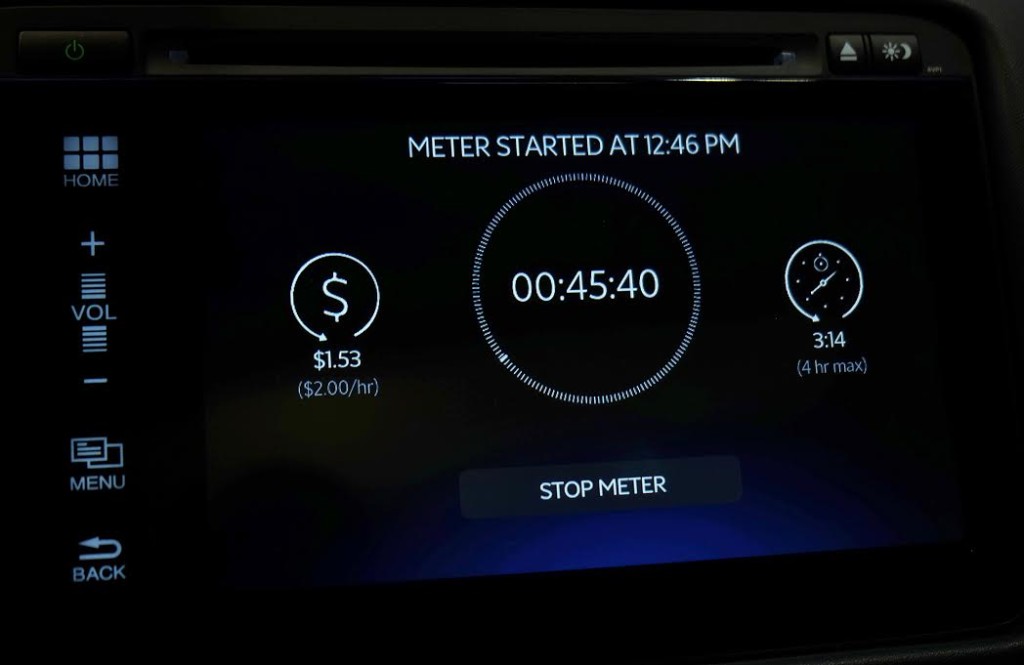 This demo has smart parking metres in mind, and uses beacons to communicate with the car to know that a spot is occupied by recognizing when it shifts from drive to park. Normally, drivers would have to get out and pre-pay for a ticket to cover the time the car stays there, but it’s long been an inefficient system where under or overpaying has become common.

Visa’s solution is to change it to a post-paid model where drivers would pay for parking when they leave the spot — all, of course, managed by the parking app and requiring no loose change or plastic to pay for it. The company says the real benefit is that consumers would pay only for the time they parked, not more, not less, thereby dealing with scenarios of guessing the time or running out to top up. It sounds similar to how carriers billed by the second instead of the minute.

A smartphone app keeps track of the metre at all times, though that is really only relevant in instances where the car is parked in a spot that has a maximum time limit. In those cases, a text would be sent warning drivers of imminent expiry.

Paying for parking via an app isn’t new, so Visa’s app isn’t necessarily ground-breaking, but by embedding it in the vehicle and enabling correct payment right down to the last penny, this post-paid model makes the driver do next to nothing once he or she parks and walks away. 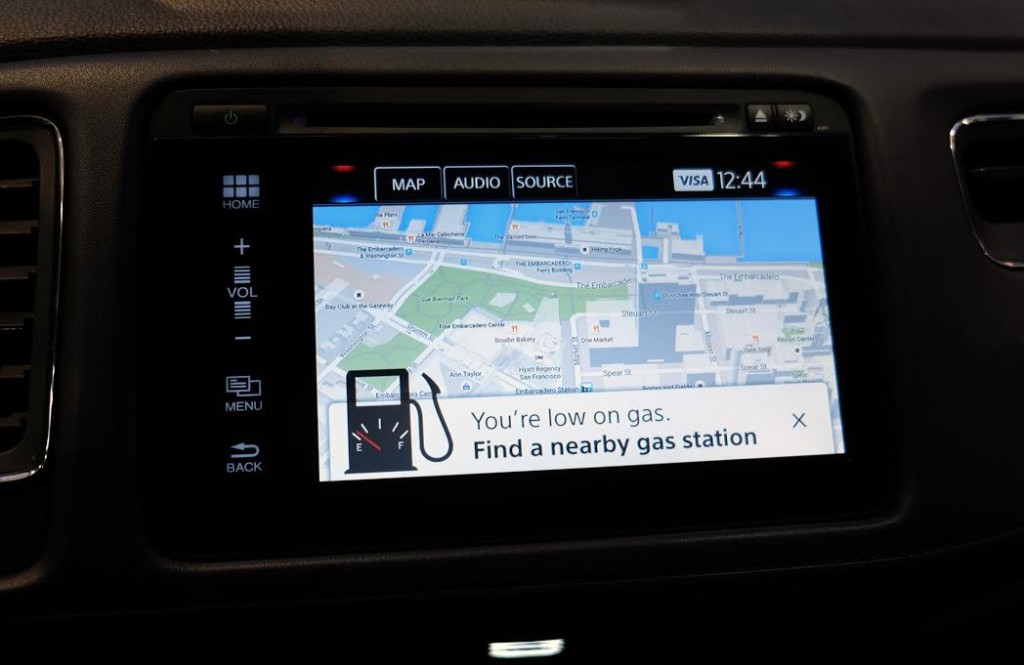 For the moment, Honda will be the automotive partner on this pilot project, which will roll out this spring or summer — in New York City for the parking side and the Bay Area in California for the fuel one. There are plans to expand this in other regions and countries, and Canada’s major cities could be on the board, though probably not until next year.

While unconfirmed, other test pilots could go live as well. Visa says it has opened the “framework” that would allow other vendors to try testing. Payment settings for tolls, maintenance, roadside assistance and food would make sense as well. As an example, Tim Horton’s drive-thrus are highly popular in Canada, and could benefit from a system like this that allows drivers to order what they want entirely from their vehicle and pick it up without having to use cash, debit or credit.

Another caveat to this is that it requires an onboard SIM in the vehicle — something most don’t have on the road. And even when they do, like GM, Ford, BMW and Audi, among others, they are generally locked down for each automaker’s own services. They may not open them up to adopt Visa’s in-car payment system. In either case, the data connection required to run it could piggyback off a phone instead.