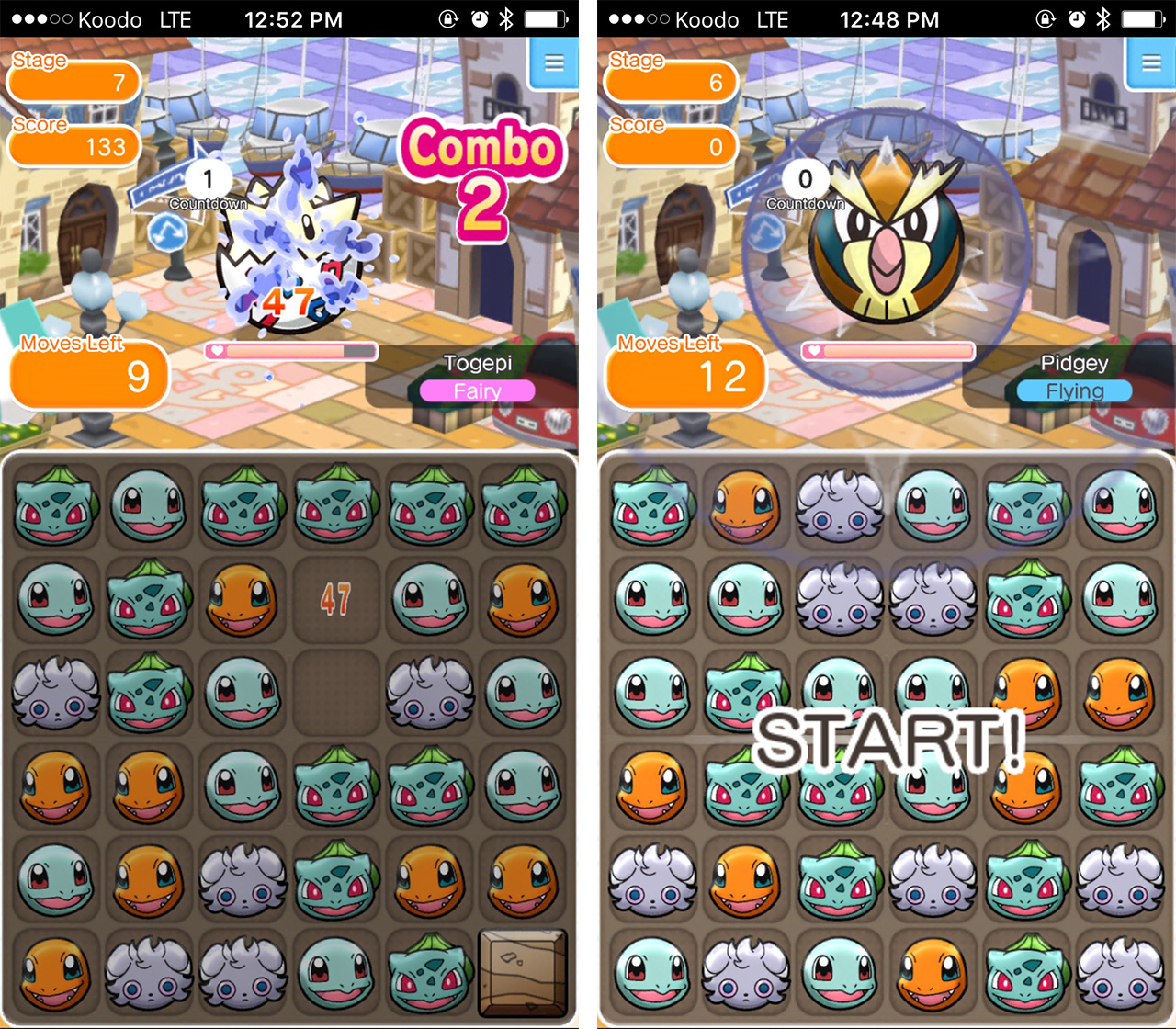 I love the idea of Threes, but I’ve always found even the most basic math intimidating, and this is why The Pokemon Company and Genius Sonority’s Pokemon Shuffle, is exactly the type game that appeals to me.

The iOS version of Pokemon Shuffle has been out for a few months (as well as the 3DS iteration), but the game’s Android counterpart only launched in early September, bringing the Pokemon matching title to an even wider audience.

However, since Pokemon Shuffle is a free-to-play title, this means it must be a bad game, right?

For me there is a clear distinction between a free-to-play title that includes optional microtransactions, and a game that’s pay-to-win. Pokemon Shuffle falls on the right side of this spectrum (for the most part) when it comes to forcing players to fork over money for menial in-app purchases. Most microtransactions come down to purchasing additional moves, additional experience points, and lowering the complexity of a specific stage, all easily avoidable elements of Pokemon Shuffle’s gameplay if the player adopts a little perseverance in some of the game’s more difficult stages.

However, it’s important to point out that Pokemon Shuffle also unfortunately institutes an Angry Birds 2-like paid progression system, which could be a deal breaker for some players, especially those who despise the inherent concept of microtransactions.

The game adopts a freemium format, requiring the player to spend “Hearts” for each subsequent attempt at a stage. Hearts are recovered by waiting a period of time (30 minutes) and additional hearts can also be purchased with coins bought with real world money. While this mechanic might sound frustrating (and it is sometimes), during my roughly two hours playing the game, I rarely ran into progression-related issues, but this is likely because I tend to play Pokemon Shuffle in relatively short bursts. When I run out of hearts, I simply take a break from the game for a little bit.

Pokemon Shuffle’s gameplay, like all good mobile titles, especially those of the puzzle variety, is deceptively simple. On a basic level the ultimate goal is to match three or more Pokemon to defeat your opponent over the course of a set number of moves. For example, if you don’t take down Togepi in enough moves, you’ll fail that stage. This means that carefully selecting matches is a necessity in order to be successful in Pokemon Shuffle. 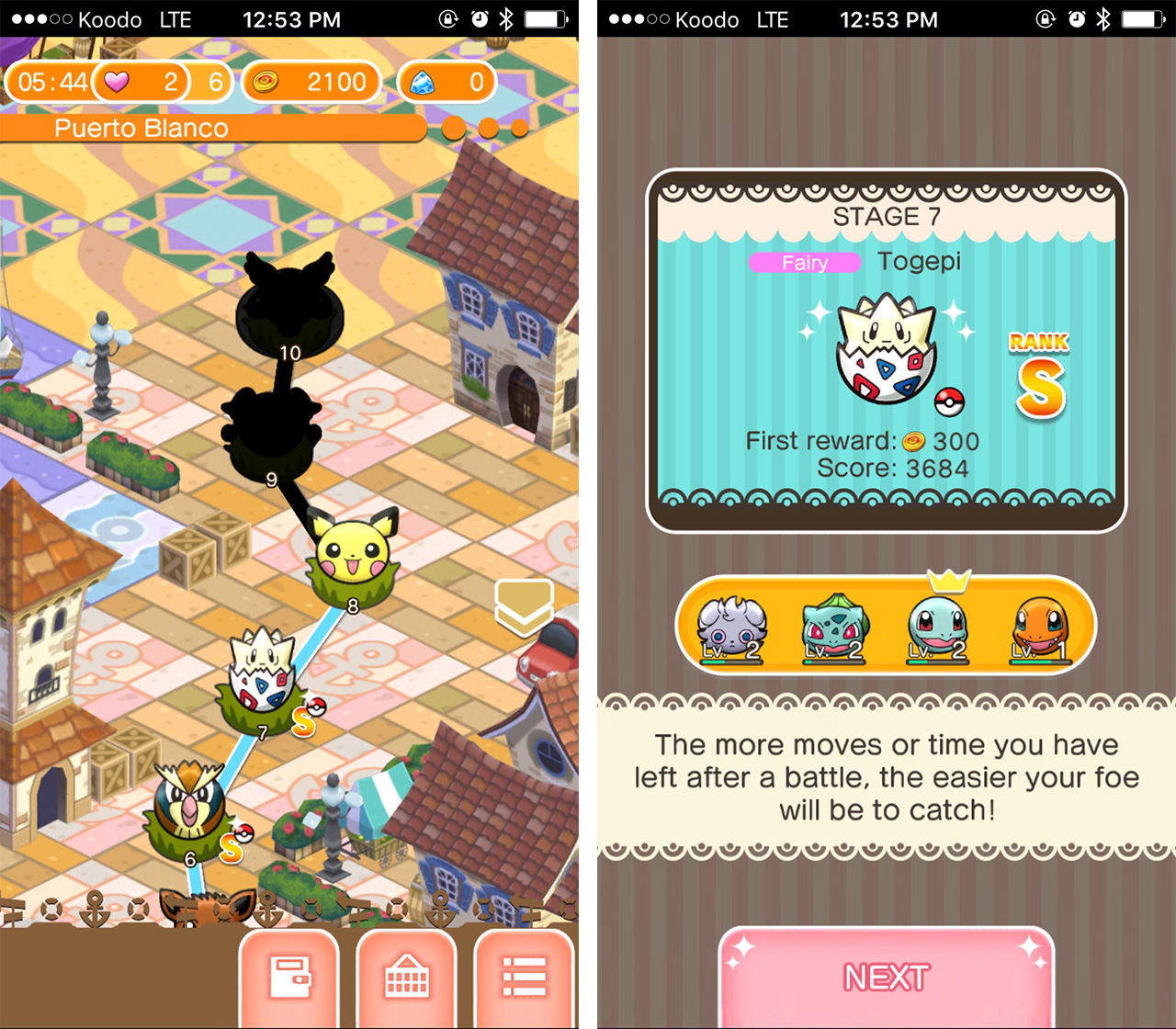 Other elements pulled from the core Pokemon franchise such as matching Pokemon types also come into play in Pokemon Shuffle. For example, a water Pokemon is going to more efficiently take down a fire type Pokemon. Capturing Pokemon and adding them to your roster is also a significant part of Pokemon Shuffle, especially when it comes to type matching while in a battle. Furthermore, in true series fashion, Pokemon in your squad can be levelled up so their attacks are more effective.

There are a few frustrating drawbacks to the mobile versions of Pokemon Shuffle though, especially in comparison to the 3DS iteration. My major gripe with the game is the fact that it requires an internet connection to play, a silly and unnecessary form of DRM. This means that if I want to play the game during my morning commute on the subway, I can’t, defeating the purpose of an on-the-go mobile game existing in the first place.

Overall though, I’ve had a decent time with Pokemon Shuffle. It’s also important to point out that the game is likely indicative of where future Nintendo mobile games are headed when it comes to both structure and microtransactions.

Pokemon Shuffle is available on both iOS and Android.