Rogers today announced a new initiative that, once rolled out, will offer gigabit home internet access to millions of Canadian homes.

But those whose homes are not within reach of Rogers’ new speeds can now sign up for new 30GB and 60GB monthly wireless plans, which the company rolled out today as well.

Offered at $175 per month and $325 per month respectively, plus the monthly cost of phone service (between $35 and $60 per line) the new plans are capacious enough to satisfy the most bandwidth-intensive users — or groups of users, since Rogers allows data plans to be shared with up to ten users. 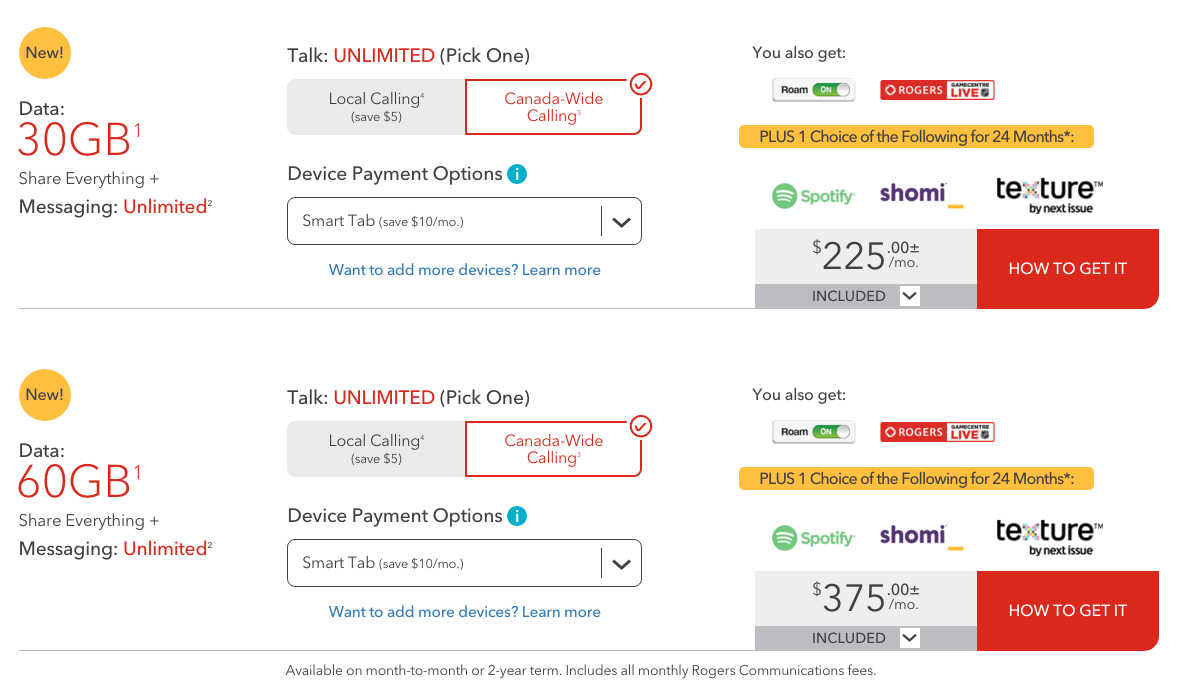 In reality, the 30GB plan is new only in the sense that Rogers removed it during the transition to Share Everything+, and has since brought it back, albeit at a slightly lower price (the data portion used to cost $190).

The 60GB plan, which works out to an company-low $5.41 per gigabyte, is new, and the largest data bucket offered by the Big Three. Others, such as regional carrier SaskTel, MTS and Wind Mobile, offer unlimited data for significantly less, but implement fair use policies that will throttle speeds above a certain threshold.

As part of Rogers’ new Share Everything+ strategy, the new plans offer the choice of two years of Spotify Premium access for up to three phone lines, or a single Shomi or Texture by Next Issue promo code for two years.

The new plans also allow for various incarnations of voice and text under a single account. For example, the main account holder can pay $60 and receive a subsidized phone on contract for two years, while the rest can bring their own devices at $40 per month, or choose to spend more for their phones up front under the Smart Tab system and spend $50 per month for access. Similarly, users no longer need to sign up for unlimited Canada-wide calling, but can choose to save $5 per month for what Rogers considers “local calling,” which brings back the notion of artificial calling areas, bringing the cost of phone service down to $35, $45 and $55 respectively.