On Thursday, HTC posted its second quarter results, and they weren’t pretty. On revenue of $104-million, the company reported an operating loss of $160-million. Worse, it also told investors that it doesn’t expect things to get better in the near future; HTC is forecasting at least one more loss in Q3.

In an attempt to turn the tide, the company is apparently working on a “fashionable and trendy” phone that it hopes will turn its fortunes around. For the most part, however, it may have to rely on drastic cost cutting measures to stop the bleeding, and significant job cuts are coming, according to the company’s chief financial officer.

“The cuts will be across the board,” said Chialin Chang, the company’s CFO, in an interview with reporters after his company announced its abysmal second quarter results. “They will be significant.”

Chang wasn’t specific on how many jobs HTC will cut, but he did say that the company will continue to reduce its headcount in to the first quarter of 2016.

Since the start of the year, HTC’s shares have fallen by 51 per cent, and it’s easy to pinpoint when that decline started. In March, the company announced the One M9, a smartphone that was greeted with collective indifference. Since then, the company’s stocks have plummeted to a 10 year low. Take a look at the chart below, courtesy of Bloomberg, to see how drastically HTC’s stock has fallen. 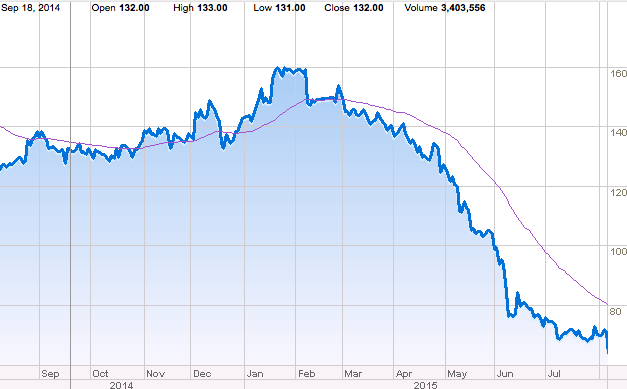 The HTC Vive, the virtual reality headset the company is co-creating with legendary game developer Valve, is likely the company’s best bet at returning to profitability. Unfortunately, it’s not expected to ship until later this year. Moreover, after Time’s less than flattering cover story on virtual reality, it’s not clear if regular consumers are ready to embrace VR. What is clear is that dark times are ahead for a company that was once Android’s shining star.