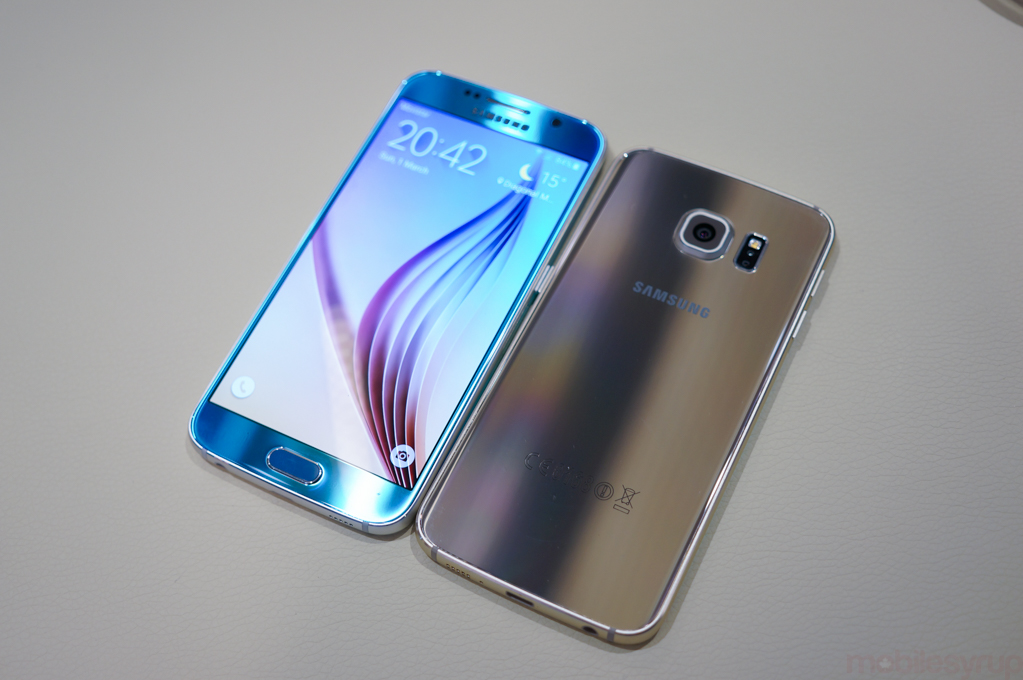 The devices were unveiled during a press conference at Mobile World Congress, and while fans will see considerable improvements on both devices from the Galaxy S5, it’s the ultra-expensive Galaxy S6 Edge that is set to turn heads when it hits store shelves next month.

The first and more mainstream of the two devices, the Galaxy S6, sports a 5.1-inch QHD (2560×1440 pixel) Super AMOLED display, but its new metal frame and glass back, which is not removable, is going to be the first major change people notice. That Samsung rid the popular smartphone of its exchangeable battery is one of two major omissions — the other being a lack of microSD expandability — that is sure to be divisive.

As we told you last year, the Galaxy S6 line was formed with a deliberate plan to diverge as much as possible from the line’s plastic past. While Samsung debuted several metallic phones in 2014, including the excellent Galaxy Alpha and well-received Galaxy Note 4, its design change will impact millions of new customers with the Galaxy S6, and pave the way for a reevaluation of Samsung as a company. 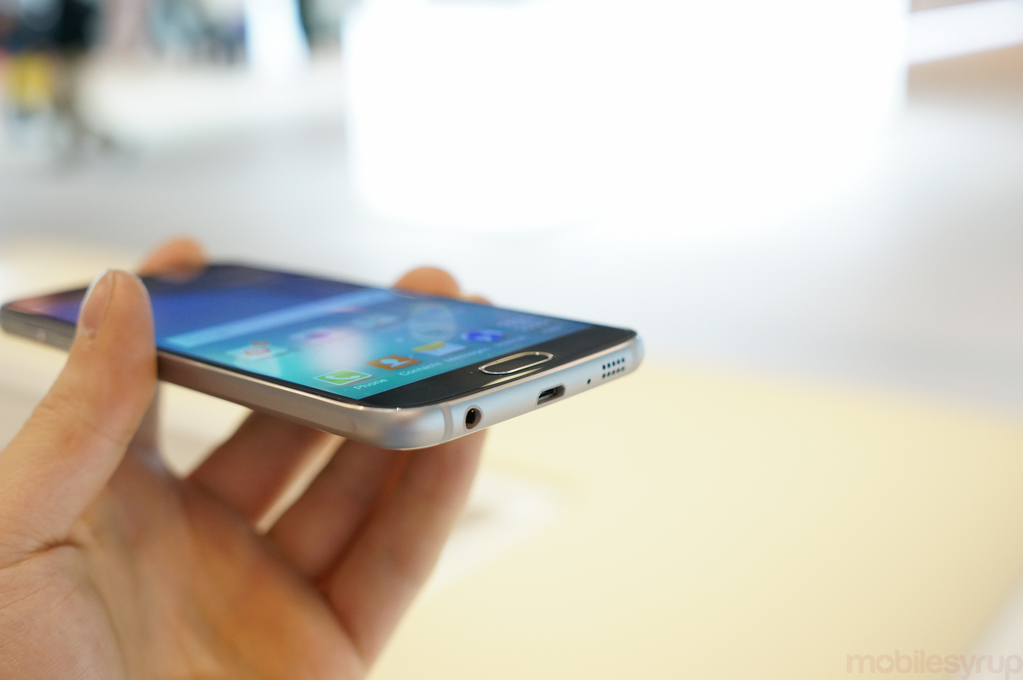 The Galaxy S6 eschews much of the practicality of its predecessors in favour of a more design-first approach. It is neither waterproof nor user serviceable, owing to feedback from its customer base. Samsung says the world has been clambering for higher-quality flagships, and it is here to deliver.

The Edge is, like the S6 itself, a high-design piece of electronics, but its 5.1-inch screen curves inwards towards the phone’s back. Unlike the Note Edge, this display still affords room for the power and volume buttons in their regular spots — right and left sides, respectively — and user shouldn’t feel, despite the innovations, any lessened sense of usability. In fact, while the edge display doesn’t offer as much functionality, at least for now, as the Note Edge’s larger right side equivalent, it is customizable with several pieces of content such as notifications and weather widgets. Samsung promises more features in the months to come.

Both devices sport 16MP camera sensors, similar to the ones in the S5 and Note 4, but their F1.9 lenses ostensibly let in significant more light, and like the Note 4, offer optical image stabilization for improved low-light results. The cameras now sport advanced auto-tracking, a feature merged from Samsung’s high-end NX mirrorless line. Double-tapping the power button from any app, which used to be reserved for S Voice, now opens the camera, and the open-to-shoot time has dropped to 0.7 seconds, one of the fastest in the industry. In addition, there is 5MP front-facing camera. 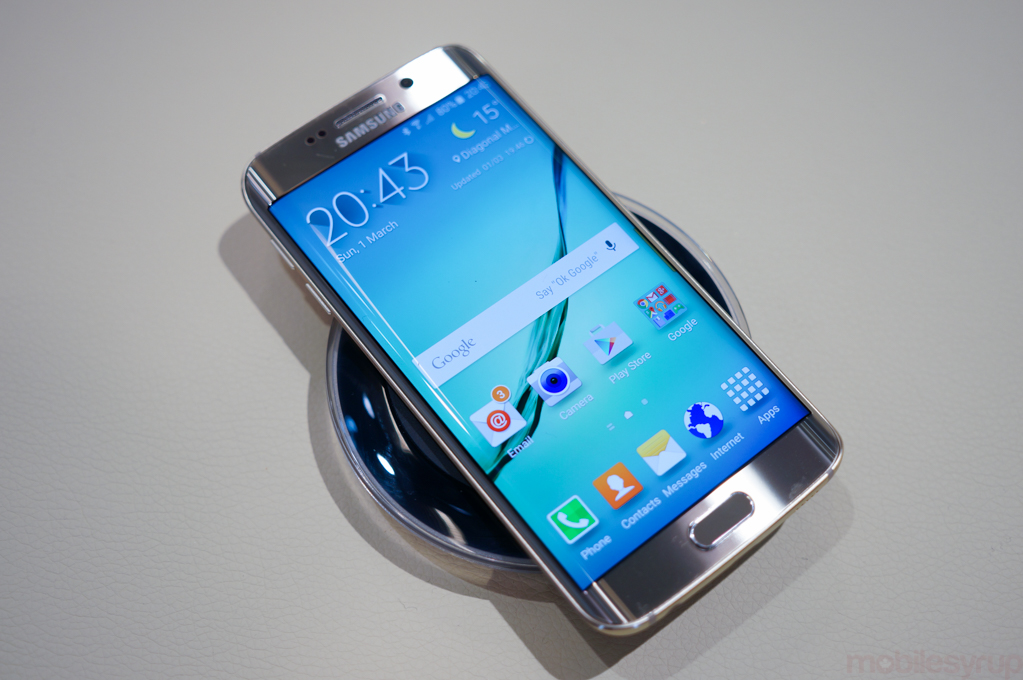 Samsung also added wireless charging into both the S6 and S6 Edge, and is the first in the industry to offer both Qi and PMA compatibility, which is practically 100% of the wireless charging pads out there. There’s also Fast Charging using the included AC adapter, which helps users reach 50% battery in 30 minutes.

On the software side, the devices run Android 5.0.2 with a TouchWIZ overlay that Samsung hopes users will call, for once, restrained. There are 40% fewer features, many of which have been eliminated to improve speed, based on customer feedback. Most can be downloaded through GALAXY Apps, the company’s app store, if desired.

Finally, the rumours are true: Samsung has done away with Qualcomm in favour of its own 14nm Exynos 7 chip. The company promises that its solution is as far, if not faster, than the Snapdragon 810, and LTE reliability is just as robust. The first flagship released in recent years not to sport a Qualcomm chip, it will be very interesting to see whether the performance holds up, especially since Samsung has never offered its own embedded LTE solution before. Along with the processor is 3GB of LPDDR4 RAM, and Samsung plans to offer 32, 64 and 128GB variants to make up for the lack of microSD expansion.

On the battery side, both devices have slightly smaller cells than last year’s S5: the S6 has a 2,550mAh cell, while the S6 Edge sports a 2,600mAh battery. Samsung says battery life will be equal or better to the S5 due to the more efficient 64-bit chip, but we’ll have to wait until a review unit to test this.

Of course, one of the main concerns from the S5 was the poor performance of its fingerprint scanner, and along with the announcement of Samsung Pay, the company’s mobile payment solution in collaboration with recent acquisition, LoopPay, the new fingerprint reader is touch-based, similar in function to Apple’s Touch ID.

Obviously, Samsung is promising a lot here, and is excited to show off just how far it has come after a disappointing 2014. Both the S6 and the S6 Edge are some of the most advanced smartphones ever created, and better compete with Apple’s two new iPhones. But whether Samsung can regain its market dominance is a question everything, including its executive team, is desperately wondering.

Update: Samsung confirmed that the Galaxy S6 and Galaxy S6 edge will launch in Canada on April 10th.