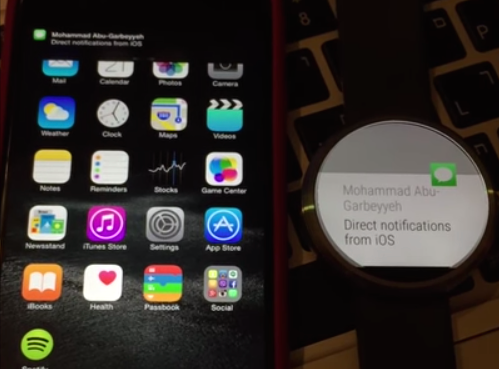 Thanks to Android Wear, the number of smartwatch choices for Android users grows larger every day. However, until the Apple Watch comes out in mid-April, iPhone users are limited to the small number of devices that are compatible with both Android and iOS. Or are they?

This past weekend, Android developer and regular XDA forums user MohammadAG tweeted that he had gotten rid of Android Wear’s need for an Android device. This was achieved via the iPhone’s ANCS, or Apple Notification Center Service. ANCS exists to allow Bluetooth devices access to notifications generated by iOS. MohammadAG’s hack involves uses a custom APK running on an Android Wear watch, turning it into an ANCS NC (or Notification Consumer). The end result sees iOS able to push notifications to Android Wear, just like it would the Pebble.

If you’re a die-hard iPhone user, this solution likely isn’t for you. Android Authority reports that the setup requires an Android device, so you’ll need to have an Android smartphone to get going anyway. What’s more, if you do get that far, you can expect a fairly limited experience compared to what’s offered by your Android/Android Wear combo. Together, the iPhone and Android Wear are only really capable of showing you notifications on your wrist, and not much else. Still, pretty cool, especially if you don’t want to fork over the cash for an Apple Watch.

Check out the video below to see the hack in action: