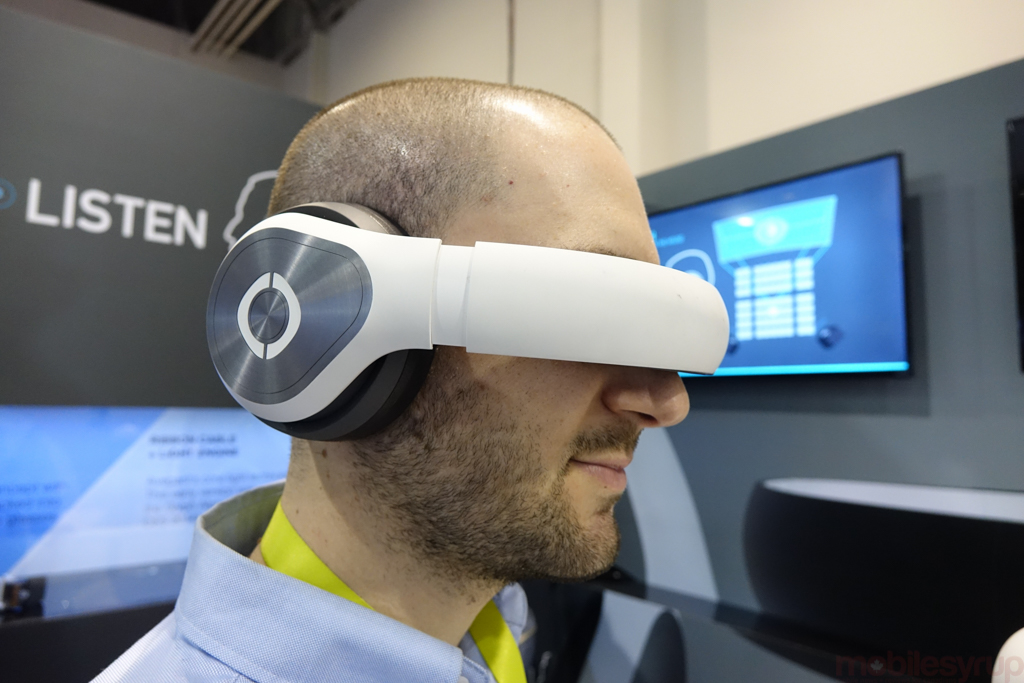 One of the best moments of CES came on its last day, watching How To Train Your Dragon 2 on a 30-foot movie screen.

No, I didn’t take off early to catch a flick (trust me, I wanted to), but was instead given a prototype pair of headphones that happen to have a projection system built into the headband. 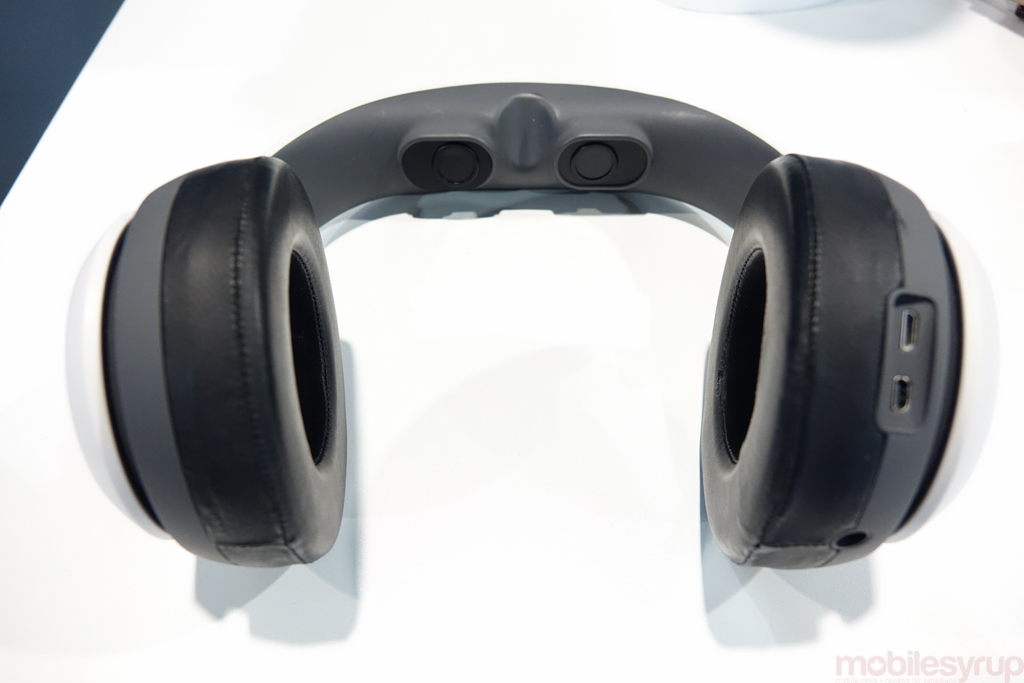 The Avegant Glyph launched at CES a year ago to much acclaim, and went on to raise over a million dollars on Kickstarter. But as the company closes on a release date, concept has turned to overcoming engineering challenges.

There were two Glyphs at the show this year: a hacked-together, rickety prototype on which I enjoyed a few minutes of projected 3D flying dragons; and the one you see above, the non-working model based on the final hardware design. It’s easy enough to put the two together in my mind, and what I saw — see — is just incredibly captivating, both as a product and a concept. 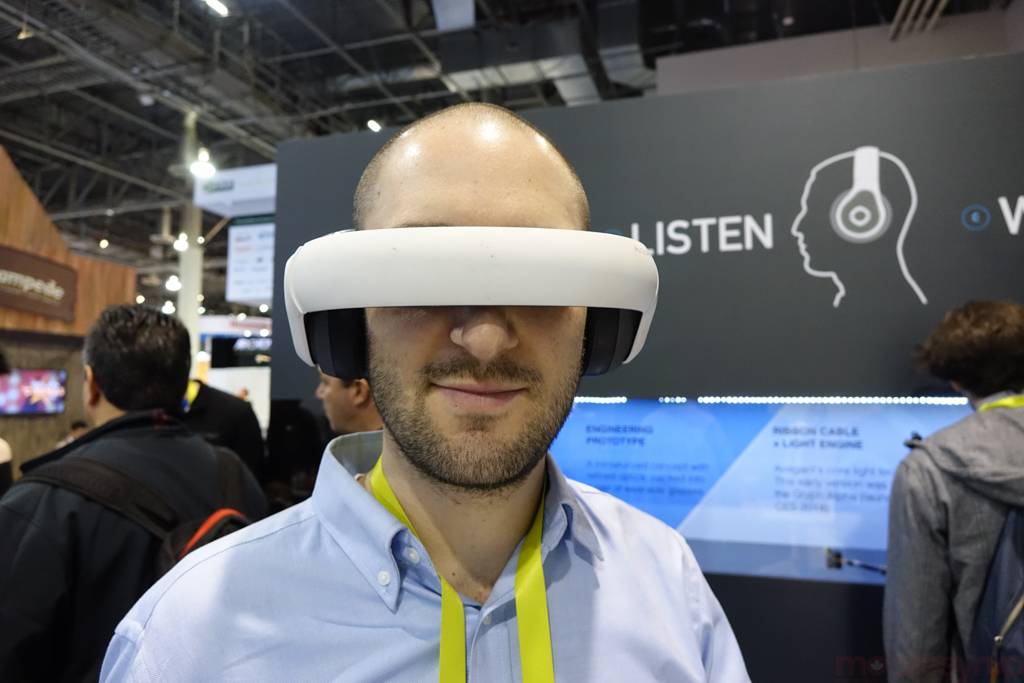 Avegant wants you to know something off the bat: Glyph is not a VR headset, at least not in the traditional sense. Its visual element is comprised of a projector, based on Texas Instruments’ decades-old DLP technology. The idea is that instead of viewing content on a small LCD screen that, in front of your eyes purports to be larger, a small LED bulb projects light onto a million micro mirrors (say that ten times fast) that, once through a second set of optics to focus the light, is projected directly into the back of the viewer’s retina. The resolution is 1280×720 per eye, but the presentation appears pixel-less as it floats in front of them.

The idea of self-imposed isolation is not a new one — people create such rooms in their homes all the time — but the Glyph offers a drastic reimagination of that motif. While it may seem preposterous to think about pulling down a visor in front of one’s eyes on the subway, Avegant promises that as more people grow used to such VR headsets, and wearing them in public becomes more accepted (and acceptable), the Glyph will fit right in. 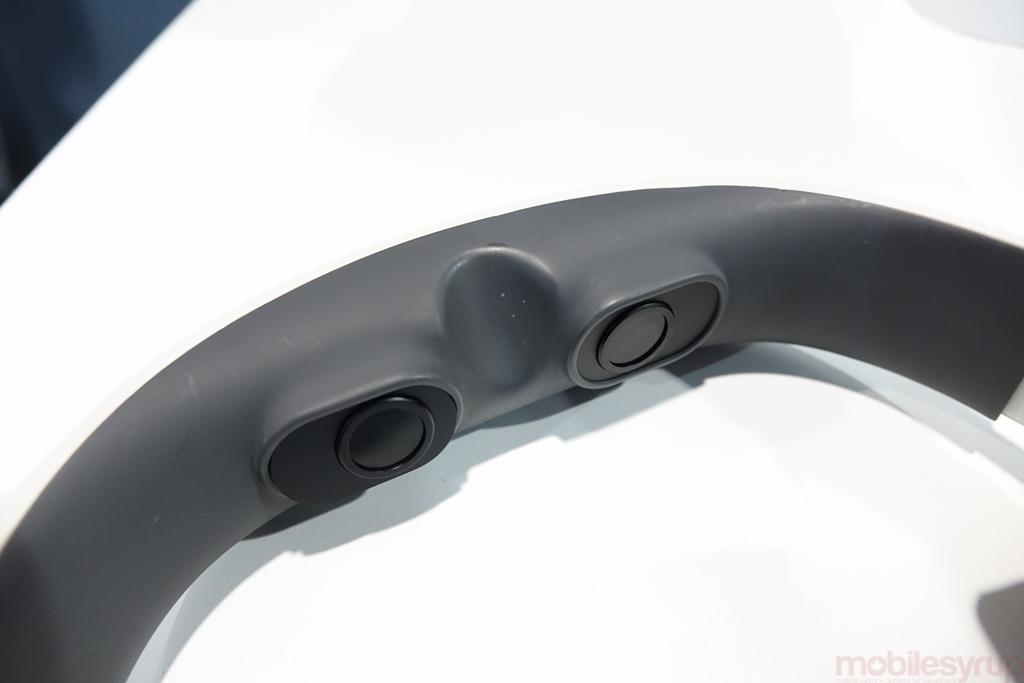 Glyph is also content-agnostic, and co-founder and COO Edward Tang said that’s what they intended all along. “We’re focused on a different consumer [than Oculus]. VR is very cool but we’re not focused on that right now. We’re focused on fashion and style and mobile.”

To that end, the Glyph has a single microUSB port for charging and a single HDMI input for connecting to practically any device with visual output capabilities. That means that users will be able to mirror what’s on one’s smartphone, tablet, laptop, television or even projector with the Glyph, in real time, and in 3D (if the content supports it).

The few minutes I watched of How To Train Your Dragon 2 were downloaded from the Google Play Store, connected through a Slimport cable that plugged into a Nexus 5’s regular microUSB port. While the current setup is a bit awkward — the Slimport cable splits to allow regular microUSB charging, too — Tang says the next generation of Glyph will almost certainly support USB 3.1 Type-C, which allows for both charging and video output from a single port.

Because Glyph works out of the box with any piece of content, Tang and his team doesn’t have to worry about creating a special operating system or a native app library to take advantage of the technology. I asked him whether this is a disadvantage in the long run, but he said that Glyph, in its current form, is merely trying to recreate the viewing experience of a great home or movie theatre, without extra bells and whistles. 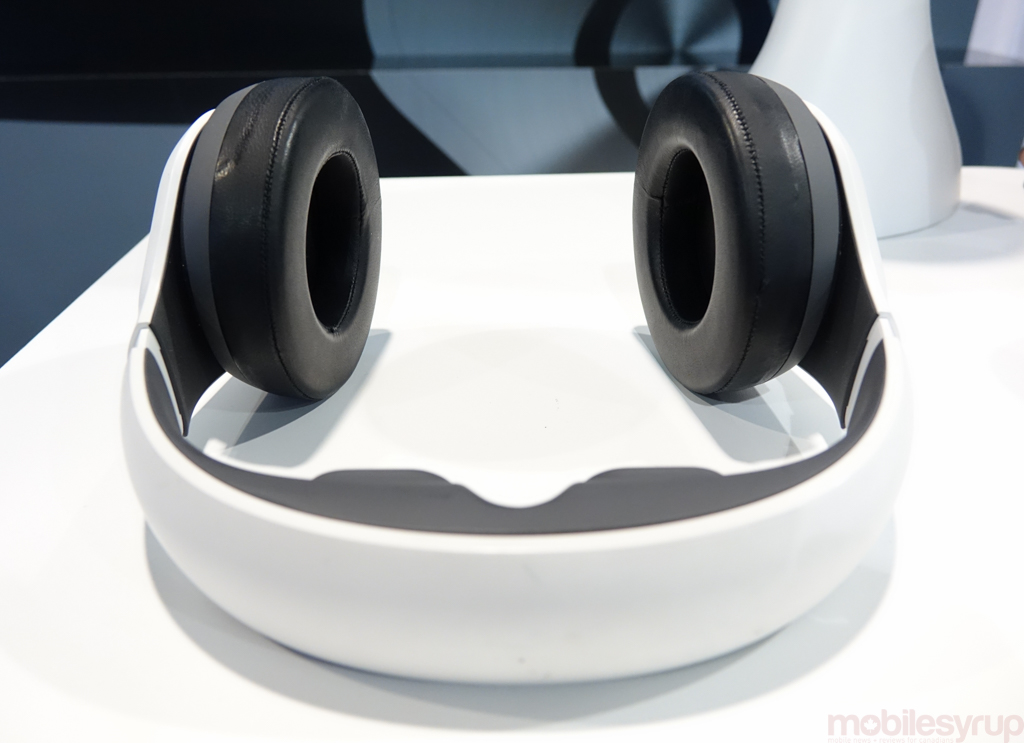 The audio component — Glyph doubles as a regular pair of Bluetooth or wired headphones, too — is equally important. We didn’t spend a lot of time talking about it, largely because Tang says it just works. “The audio experience is… excellent. It’s as good as the best $300-$400 headphones you can buy.” I listened to them on the show floor of a pretty busy conference, but I can attest to the Glyph’s aural fidelity. The spec sheet promises both active and passive noise cancellation — the first being the presence of a noise-cancelling signal generated to remove certain frequencies; the latter being a design that prevents external audio from leaking through the headpiece — with a frequency range of 20Hz to 20,000kHz.

Audio can also be conveyed three ways: through Bluetooth, connected to, say, a smartphone; a 3.5mm headphone jack; and, of course, through the HDMI cable, which also transfers the video signal. Think of the Glyph as both a television, speaker and receiver all in one.

Like VR headsets Avegant is ostensibly not competing against, the Glyph sports head tracking and a number of sensors that ensures correct orientation. And because the eyepiece is essentially peering into a projected image, the headset has IPD and diopter adjustments for people with vision problems. No glasses necessary here. The only thing Avegant can’t do (because it would require specialized lenses), is adjust for astigmatism.

As for battery life, Avegant claims the Glyph will get three hours of video playback and two days of audio. That’s pretty good for regular pair of Bluetooth headphones that also happens to double as a 30-foot movie screen. The only thing left to talk about is price, which is pretty steep at $500 USD. 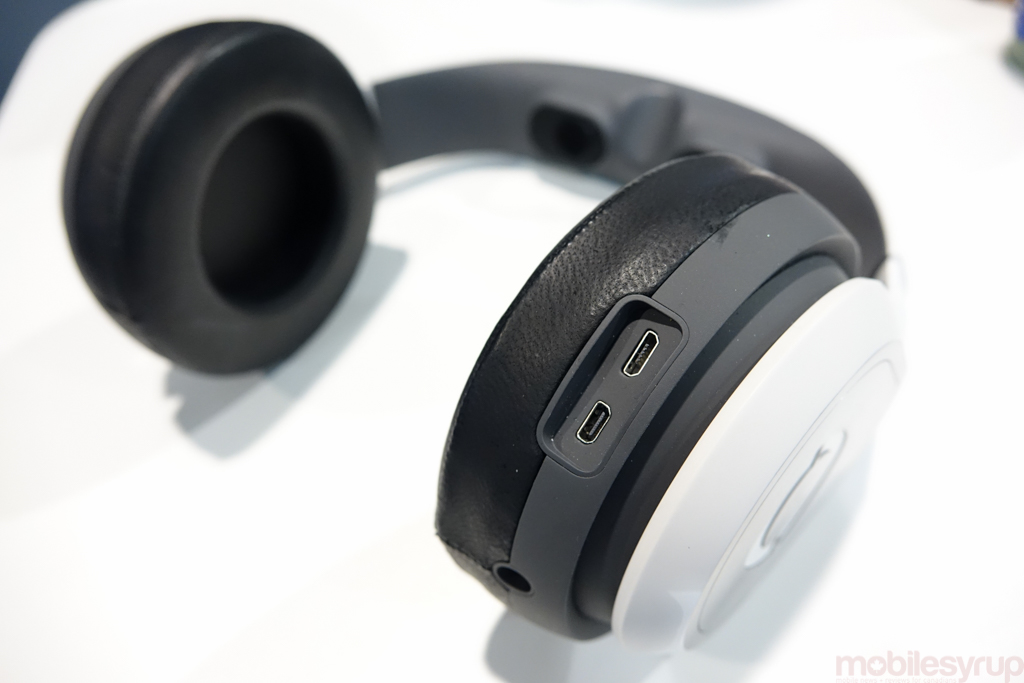 “We’re providing new experiences that fit into peoples’ lifestyles,” says Tang, who was also showing off a prototype called Jellyfish that was optimized for viewing real-time drone footage from a first-person perspective. “The Glyph is a premium mobile augmented experience,” a mouthful for a wearable that whittles down to something so simple: it’s a really great way to consume media. It’s also great for video games, or reading, or anything that requires privacy in public spaces. The first thing someone said when I told them about the Glyph is that it’s going to revolutionize public porn watching, and I can’t deny that’s where my mind went, too.

Like many great products, though, the Glyph, which should be available sometime in Autumn, is a blank slate, a canvas for whatever its users want to achieve. Audio has already reached this state of grace; so many people already experience superlative music-listening on the go. Avegant wants to bring that same experience to the visual world, and from what I’ve seen, from rickety demo to near-finished floor model, they’re getting awfully close.