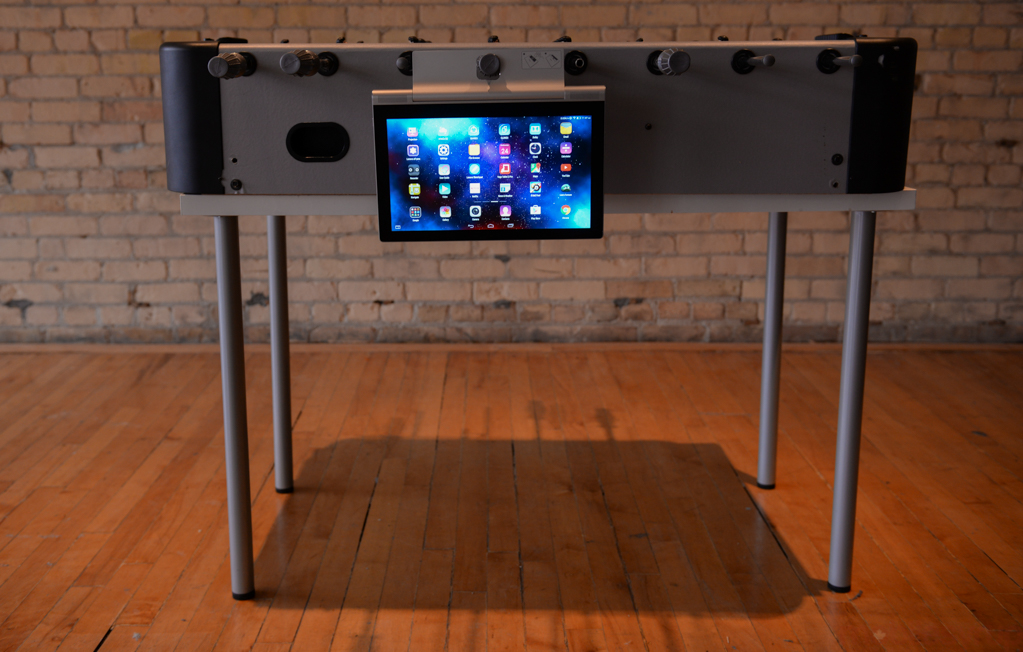 It’s safe to say 2014 was a tough year to be a tablet. As the global adoption of phablets continued at a pace beyond imagine even three years ago, it was no longer enough for a tablet to simply be a bigger smartphone. At the other end, tablets faced stiff competition from cheap Chromebooks and thinner, lighter, premium laptops.

So where does that leave tablet makers aiming to recapture hardware marketshare in 2015? Somewhere in the middle, providing large touchscreen devices merged with some of the functionality of traditional PCs. With the Yoga Tablet 2 Pro, Lenovo has extended this design approach beyond most other manufacturers, combining a large touchscreen with a PC-style design, and tossing in a relatively powerful projector to boot. Some may be deterred by the tablet’s clunky name and loose Ashton Kutcher association (AshTab?) but make no mistake, the Yoga Tablet 2 Pro is very serious about standing out from the crowd of me-too Android tablets. 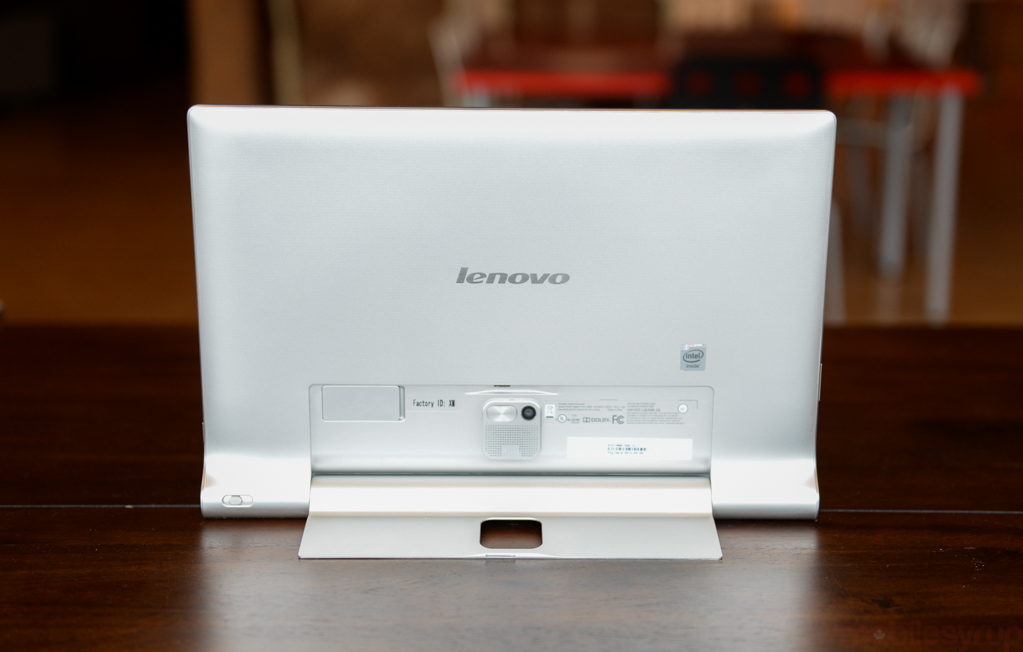 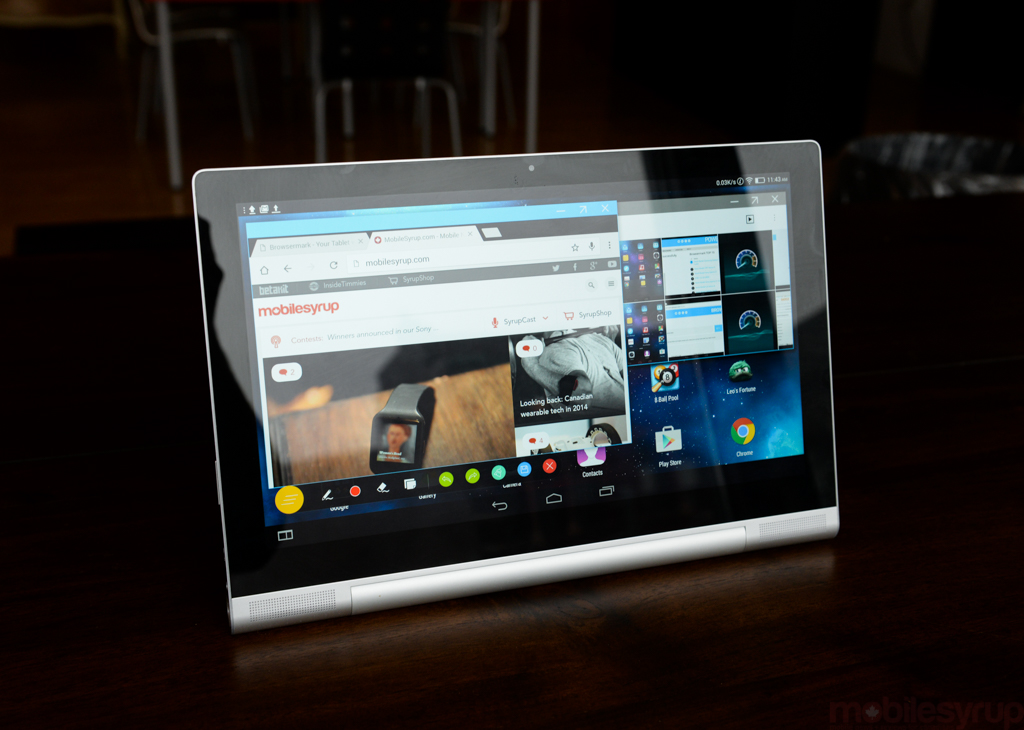 The Yoga Tablet 2 Pro is not a mobile device, but it is a portable computer. This may sound like a distinction without difference, but allow me to explain.

All mobile devices today are portable computers, as the slow plod of Moore’s Law guarantees that more and more processing power gets crammed into the devices resting in our pockets. But despite the beefy kit of today’s mobile devices, which allow us to do more with them than we ever thought possible even a few years before, their distinguishing characteristic is still, well, mobility. Mobile devices are carried in the hand; mobile devices rest in the pocket.

Some phablet owners may disagree, and tablets obviously fit a slightly different paradigm. But even tablets are separated from laptops and their more traditional traditional brethren by the ease in which they are toted around.

The Yoga Tablet 2 Pro is not a mobile device because it’s not meant to move; it’s meant to rest. Built with a mixture of hard plastics and and dense metal, the 13” tablet weighs in at a hefty 948 grams (just over 2 pounds). That’s less than a 13” 2014 Macbook Air (1.35 kg), but more than a Surface Pro 3 (800 grams), and more than double the iPad Air 2 (444 grams). The Yoga Tablet 2 Pro’s weight and dimensions (333mm x 224mm x 12.6mm) make it more comfortable to lay the device on your forearm than hold it in your hands. It is portable only in the sense that it can be conveniently moved to its next sitting destination. 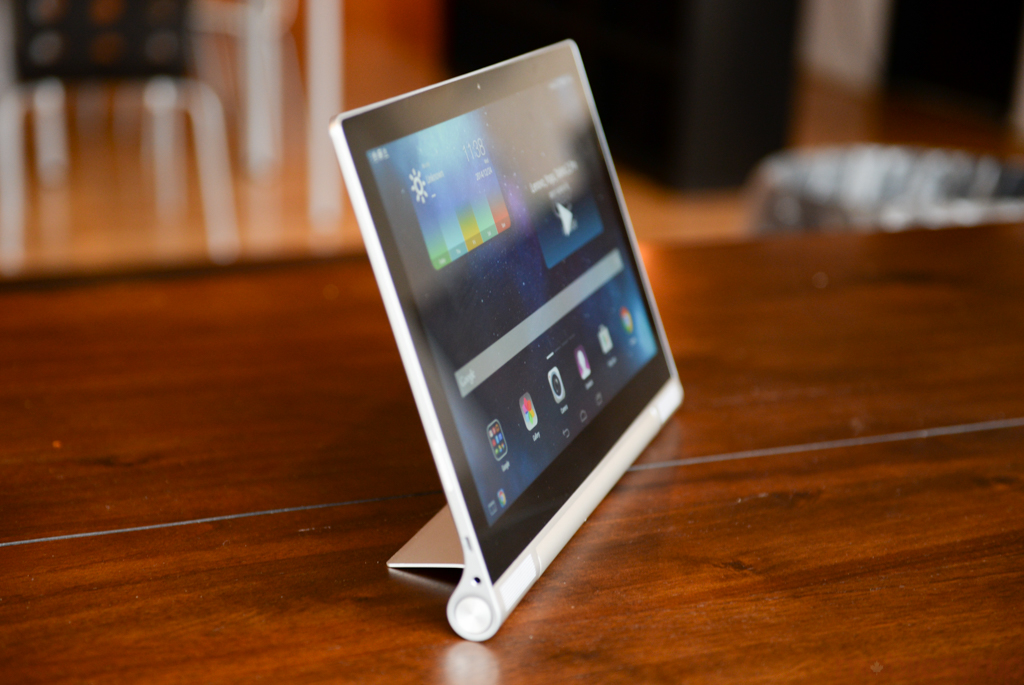 This is not an admonishment; the Yoga Tablet 2 Pro actually sits quite well. The tablet features a wide metallic stand that is both stiff and sturdy, offering a wide degree of viewing angles without fear of slippage. It also opens out from the base of the tablet, which allows it to be used as a kickstand if you want to keep the Yoga Tablet 2 Pro propped at a super low angle (a noted improvement over the Surface tablet design). The stand’s construction is also sturdy enough so that the tablet can be hung using its latch-hole.

The Yoga Tablet 2 Pro’s stationary intentions also allow for additional hardware not often found in mobile devices, such as the projector (more on this later) and Dolby Audio sound system with JBL subwoofer. Paired with bright, responsive, QHD (2560×1440) screen, I found the Yoga Tablet 2 Pro to be a convenient desktop fixture, either standalone or operating as a secondary, touch-enabled monitor for social feeds, Netflix viewing, or playing tunes. While the tablet doesn’t have the pixel density to match most tablets released in 2014, it makes up for it in additional screen real estate, which allows for better viewing from a greater distance. The Yoga Tablet 2 Pro’s screen doesn’t have great viewing angles, either, but the point is that it’s readily adjustable to meet you face on from wherever you’re looking at it. 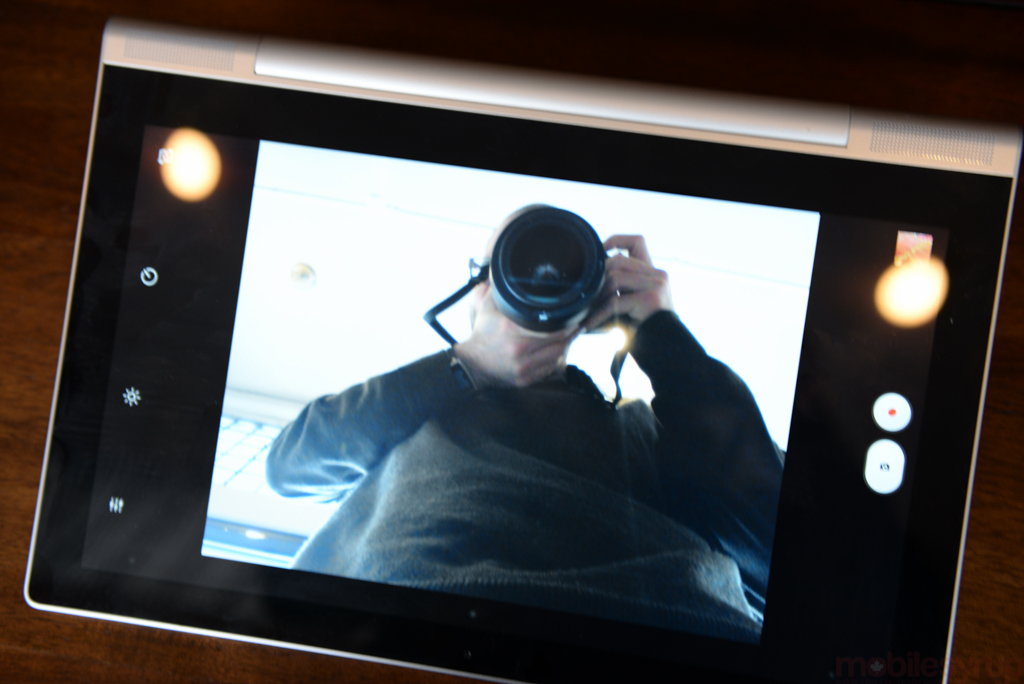 The Yoga Tablet 2 Pro’s camera, however, doesn’t hold up to the rest of the tablet’s smartly-designed hardware. Lenovo touts the tablet’s 8MP rear-facing camera, which features a f2.2 wide-aperture lens, and glare-reducing glass. However, most photos produced by the rear camera were washed out and grainy in even moderate lighting conditions, with lots and noise and artifacts caused by an under-performing BSI sensor.

But let’s be honest. The Yoga Tablet 2 Pro could have the best camera in the world and you still wouldn’t use it, despite a persistent and disturbing tablet photographer movement. Why? Because the damn thing weighs over two pounds, making it decidedly awkward as a recording device. If the Yoga Tablet 2 Pro is uncomfortable to hold in two hands under normal usage, consider the difficulties of holding it steady at chest-level to capture a proper exposure. It’s simply not happening. 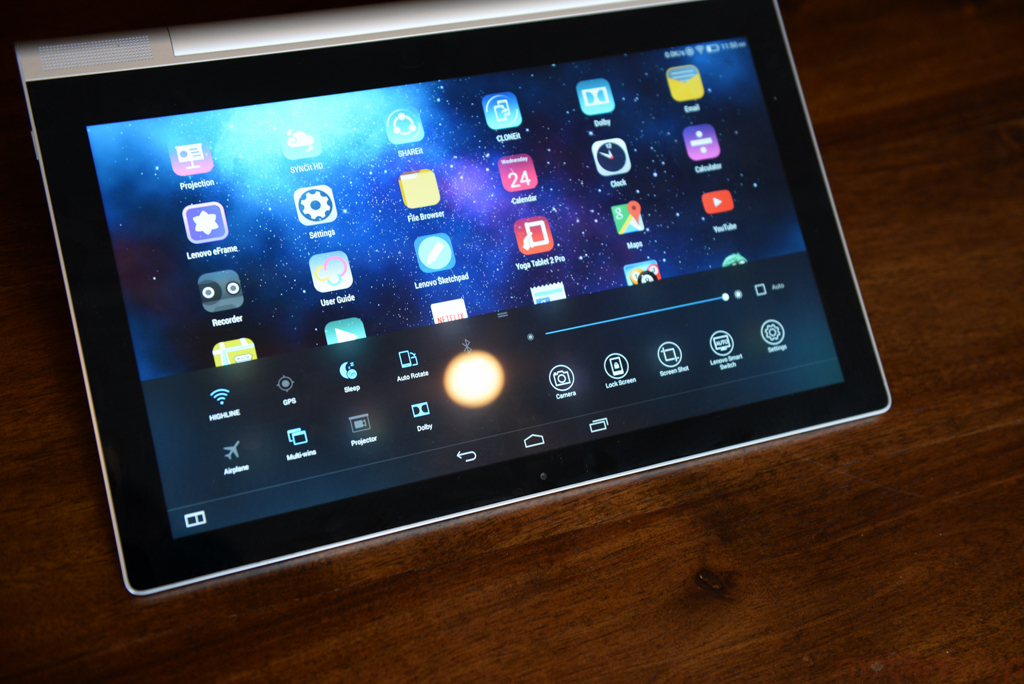 The Yoga Tablet 2 Pro runs a skinned version of Android 4.4.2 KitKat, but Lenovo has smartly avoided making significant alterations. In fact, I found many of the modifications, such as the multi-window app launcher, to be quite welcome. Little additions, like the handy screen capture tool that swipes up from the bottom of the screen a là Apple’s Command Center, added a touch of elegant productivity to Android’s core functionality. 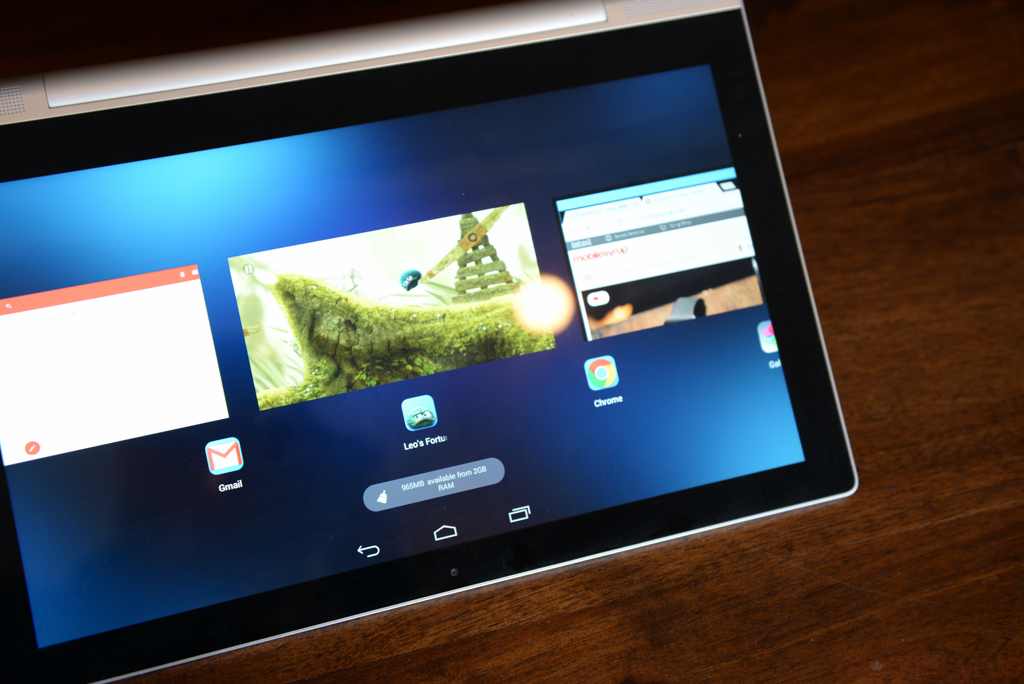 Other alterations are less impactful. Lenovo seems hard pressed to present the Yoga Tablet 2 Pro as a PC-styled (alternate versions come pre-loaded with Windows 8 instead of Android), productivity-focused device. Usually this intention presented itself in useless but amusing ways, such as a PC-styled update flow (complete with boot screen!) or constant visual indication of current download speeds or memory usage (the latter being functionally useless, as Android is not designed to perform any better the more RAM is freed). The lack of an app tray in favour of pre-set and unchangeable category buckets, however, is simply bizarre. 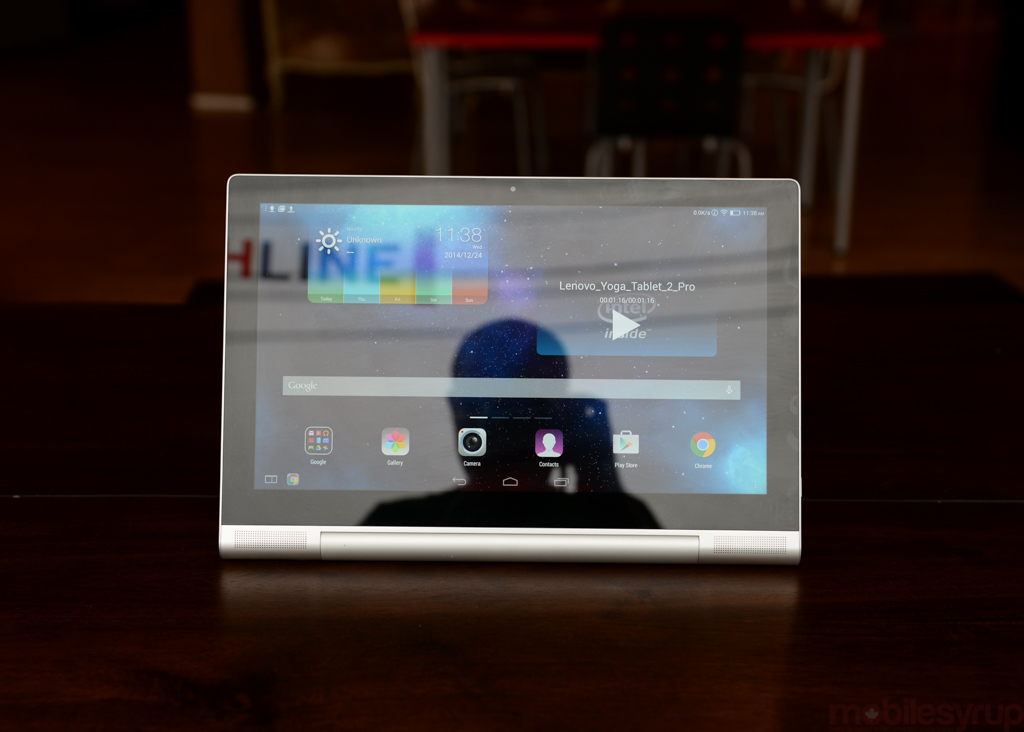 Lenovo has also smartly avoided inundating the Yoga Tablet 2 Pro with a slew of useless self-made software, opting instead to preload a portfolio of productivity-focused Android apps. Unfortunately, Evernote and Amazon Kindle aside, the majority of these apps are lower-tier versions of the best available on the Google Play Store, leaving you having to perform an app hunt anyway. In some cases, as with Evernote, you’re stuck with non-tablet optimized versions that need to be searched out for and explicitly updated on Google Play because they don’t follow the general update path of a regular downloaded app. 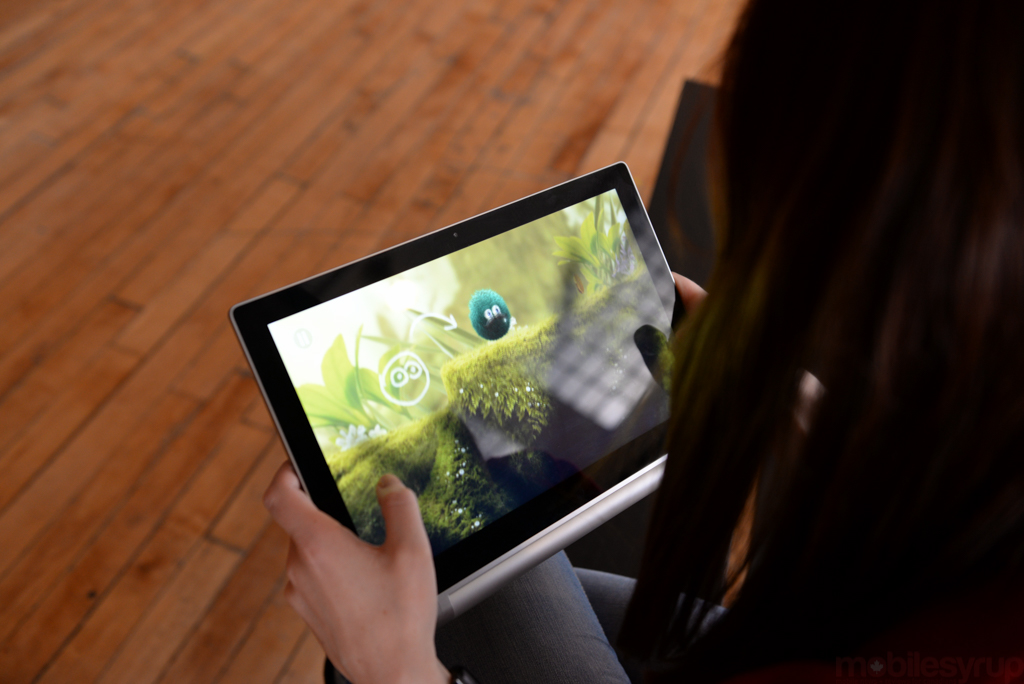 In general, though, the Yoga Tablet 2 Pro provides a streamlined and useful Android experience that in no way suffers from its middling internals. The tablet packs a 1.33GHz quad-core Intel Atom Z3745 processor and 2GB LPDDR3 RAM, which did not impress during our standard performance testing. 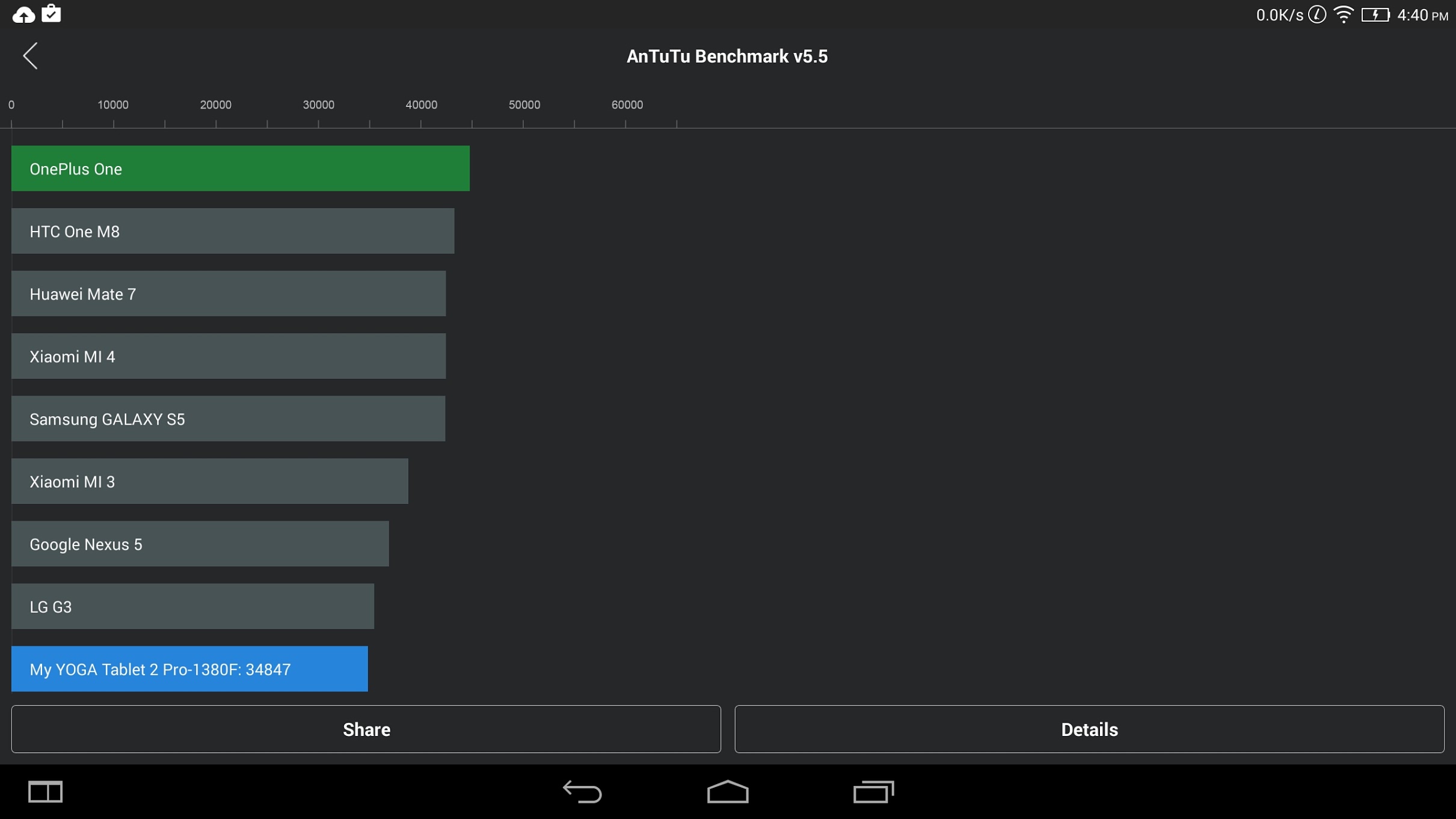 However, performance tests are not often an indication of real-life use, and I never encountered any jankiness or slowdown during my time with the tablet, with one exception. 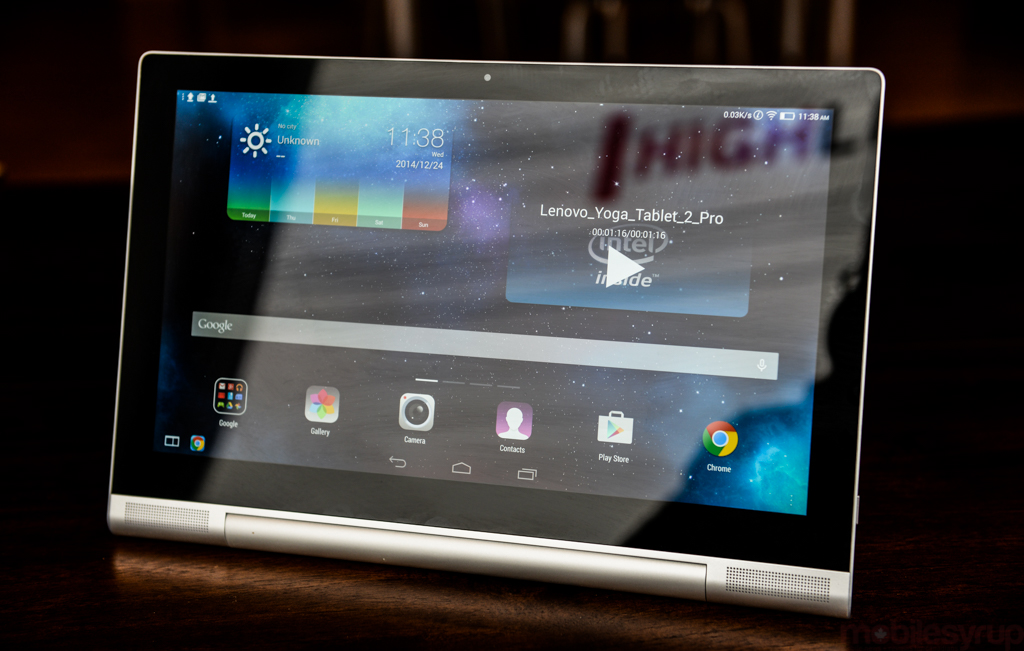 That exception being Wi-Fi performance. My initial experience with the Yoga Tablet 2 Pro was plagued with Wi-Fi issues, including poor connectivity and download speeds, as well as the inability to join certain networks. Oftentimes, I would have to toggle Wi-Fi connectivity on and off to get the tablet to join saved networks. More than anything, connectivity issues are a straight deal breaker when it comes to a Wi-Fi tablet.

I’m happy to note, however, that prior to this review going live, Lenovo pushed a software update that has resolved all connectivity issues I had with the tablet. The revised speed tests also benefited from a noticeable boost, although it should be mentioned that they were performed in an half-empty office right before the holidays.

In contrast to the Wi-Fi performance, I can say with complete confidence that the Yoga Tablet 2 Pro delivers when it comes to battery life. Lenovo boasts that the tablet’s beastly 9600mAh battery can last up to 15 hours, and in real-world usage, I found the battery to be essentially endless (barring heavy projector use). Be advised, however, that when I was forced to charge the tablet, it took ages to complete. 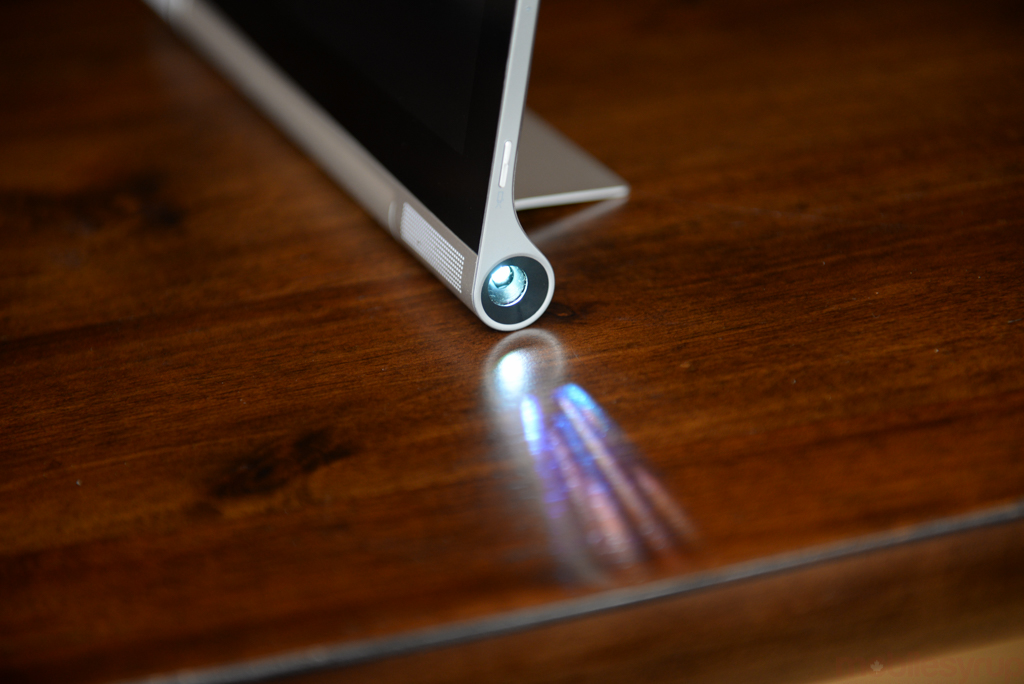 Generally, the most difficult aspect of reviewing hybrid devices lies in weighing the holistic benefits of their intersecting parts. Not so with the Yoga Tablet 2 Pro; I’m not sure what to think of the tablet’s supposed defining feature.

The Yoga Tablet 2 Pro features a low-powered projector (Lenovo neglects to specify its lumen output) integrated into the device’s cylindrical base. The projector itself is a composite of drawbacks and benefits that on the whole left me feeling positive if not excited by its presence. The dim projector requires a fairly dark room to be effective, and only outputs at a 854×580 resolution, although it can display its image up to 50 inches wide, from any of the device’s myriad orientations (Lenovo has included decent keystone correction and a Smart Switch app which can update audio-visual settings by orientation automatically). Despite being fanless, the projector does not run hot, even after extended use, and in a small enough room, provide a reasonable viewing experience, especially when paired with the tablet’s speaker system (although don’t let the inclusion of the subwoofer fool you. It’s really there to prevent speaker blowout than to provide block-rocking beats). 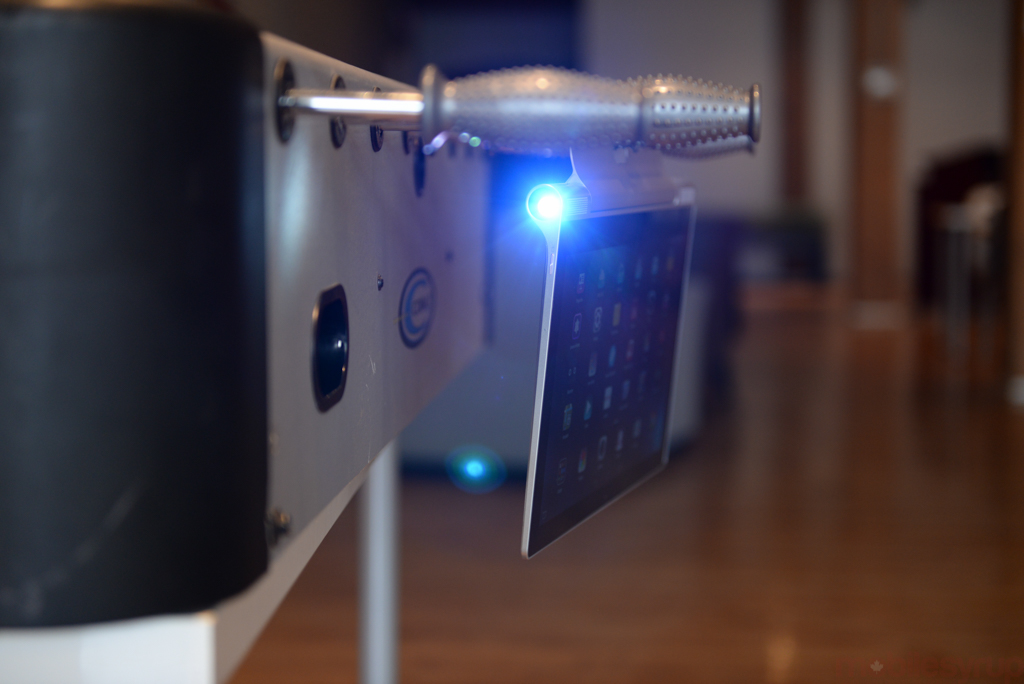 The real question is not how the projector performs, but what it’s for. The implied use case is obviously meeting presentations, but in 2014, most other devices can effectively abide by streaming their contents to a nearby flatscreen. I guess the Yoga Tablet 2 Pro provides a compelling entertainment experience for those looking to cut screens as well as cords, but I’m not sure how many people are seeking that experience. Still, the Yoga Tablet 2 Pro in no way suffers from the projector’s inclusion, so I tended to take it as a limited-use benefit rather than a make-or-break feature. 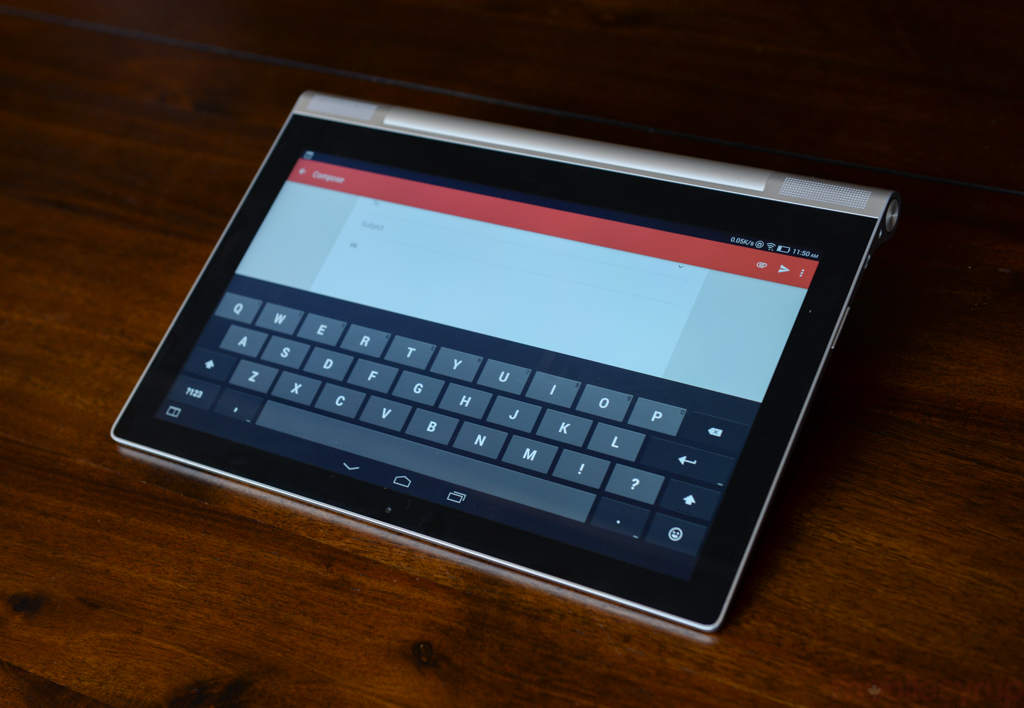 The Yoga Tablet 2 Pro is easily one of the most standout tablets released in 2014, both for its unique accessories (projector, subwoofer) and intended use case. In determining the tablet’s value, however, it’s use case that resonates more that bells and whistles. If you’re in the market for a large-scale, stationary, touchscreen companion, the Yoga Tablet 2 Pro is a great choice; if you’re looking for something actually portable, look elsewhere. The fact that it comes with a semi-decent projector for less than $500 CDN should be considered an add-on benefit rather than a purchase driver.