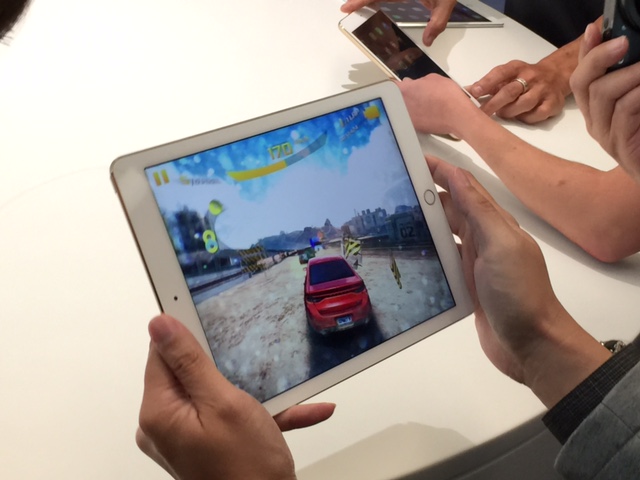 When Apple announced the iPad Air 2, it debuted a new version of its A8 chip, the A8X. Now that the dust has settled, we’re learning a little more about what Apple has going on under the hood of its latest iPad.

According to analysis from AnandTech, the GPU previously identified as the PowerVR GX6650 is a actually a modified GX6450 design. The end result is an 8 cluster design that AnandTech likens to the A8’s GX6450 with another GX6450 right above it. The cite claims to have seen a die shot of the A8X that confirms 8 clearly visible GPU clusters, something that Imagination doesn’t actually have, so this is semi-custom job that Apple’s engineers cooked up internally.

This combined with the A8X’s triple-core design (which AnandTech has also discovered is a legitimate 3 core design and not a quad-core design with only three activated cores) makes for an iPad Air 2 with performance that is much faster than that of the original A7 powered-iPad Air, something that was evidenced in benchmarks when the iPad Air 2 became available and can now been explained with a little more clarity.

So, ahead of its predecessor but what about current competition? Many have called the Nexus 9 an iPad competitor and, in terms of benchmarks, it certainly looks that way. The Tegra K1-based Nexus 9 is, as Daniel pointed out in our review, comes in ahead of the iPad Air 2 (except for the the Geekbench 3 multi-core test where the iPad Air 2’s triple-core configuration puts the dual-core K1 to bed) and Nvidia’s Kepler-based K1 is king of the castle in terms of graphics. That said, 9to5 Mac speculates that Apple’s hardware could be capable of even more with the right software optimizations.

That said, this is the first time we’ve seen Apple dabble in custom GPU designs, which is remarkable in and of itself. It may only be a modified Imagination design but we’re very excited for the future of Apple chipsets.