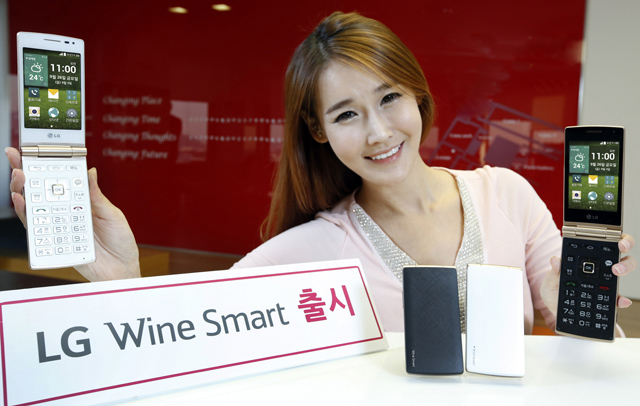 There was a time when the flip phone was king. However, for the last five years, it’s been mostly about the candy bar style device. As display sizes grew larger, clamshell designs fell out of fashion, giving way to a form factor that’s better able to accommodate larger screens.

In fact, it’s been so long since the flip phone was popular, the majority of phone manufacturers have never made a clamshell smartphone, LG among them. The South Korean company decided to change that this past weekend with the unveiling of the Wine Smart. Already unique in form factor, the Wine Smart’s design is actually not the most interesting aspect of the phone.

LG’s Wine Smart is a smartphone running Android 4.4 and is targeted at older people. The company teased the Wine Smart last week, when the world was going iPhone mad, and today announced the device as a dedicated smartphone for the elderly.

The Wine Smart is equipped with a ‘Safe Keeper’ feature that will automatically send the device’s location to a pre-determined contact if the phone is left unused beyond a certain period of time. It also has a 1W speaker to ensure the ringer can be heard even in loud places as well as a dedicated button for KakaoTalk, the IM app that sees near ubiquitous use in South Korea.

Under the hood, you’re looking at a 1.2 GHz quad-core chipset, with 1GB of RAM, 4GB of storage, support for MicroSD up to 32GB, an 8MP camera in the back, a VGA camera up front, a 1700mAh battery, and Android 4.4 KitKat. Given its clamshell design, the Wine Smart’s display is smaller than that of most smartphones, measuring in at 3.5 inches with a 480 x 320 pixel resolution.

The Wine Smart goes on sale in Korea on September 26 (this Friday). LG has yet to offer any details on international availability.