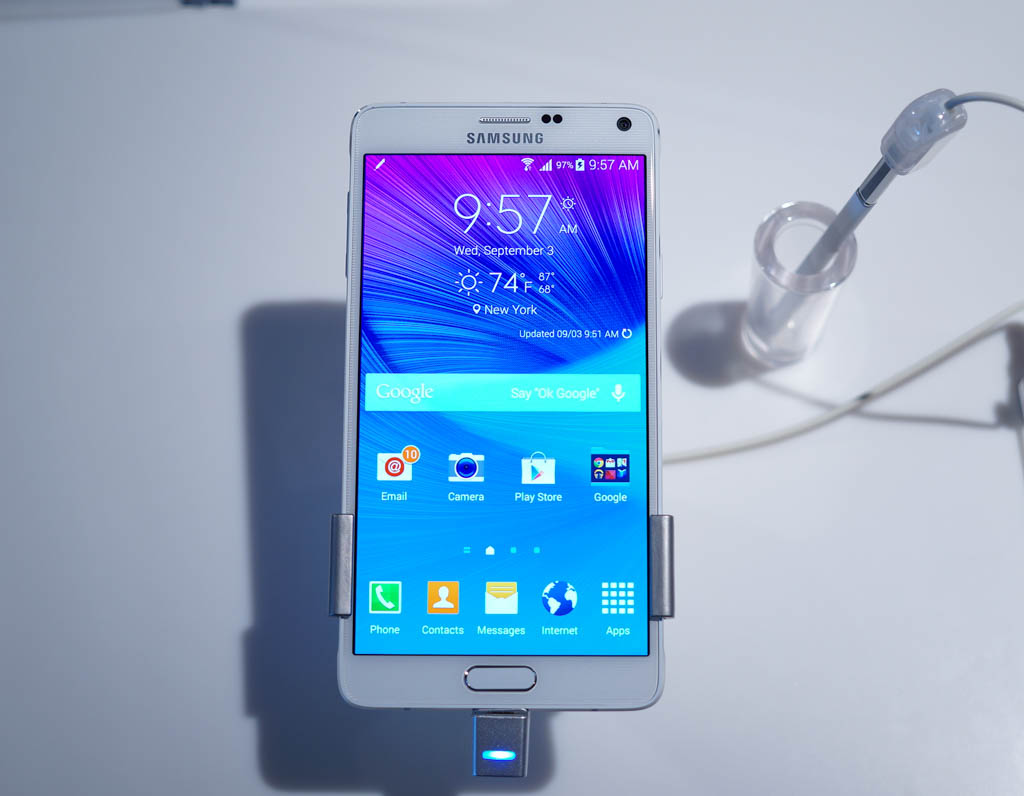 This morning, Samsung announced two new phones and a VR unit. The company, famous for its plastic devices, touted the Galaxy Note 4 and Note Edge as having the kind of sturdy metal frames consumers want — and have been buying in great quantities since the iPhone 4 was announced.

The Galaxy Note 4 doesn’t stray too far from its predecessor in terms of design — it has narrower bezels around the 5.7-inch screen — but there are dozens of small improvements that add up to a considerably finer user experience. 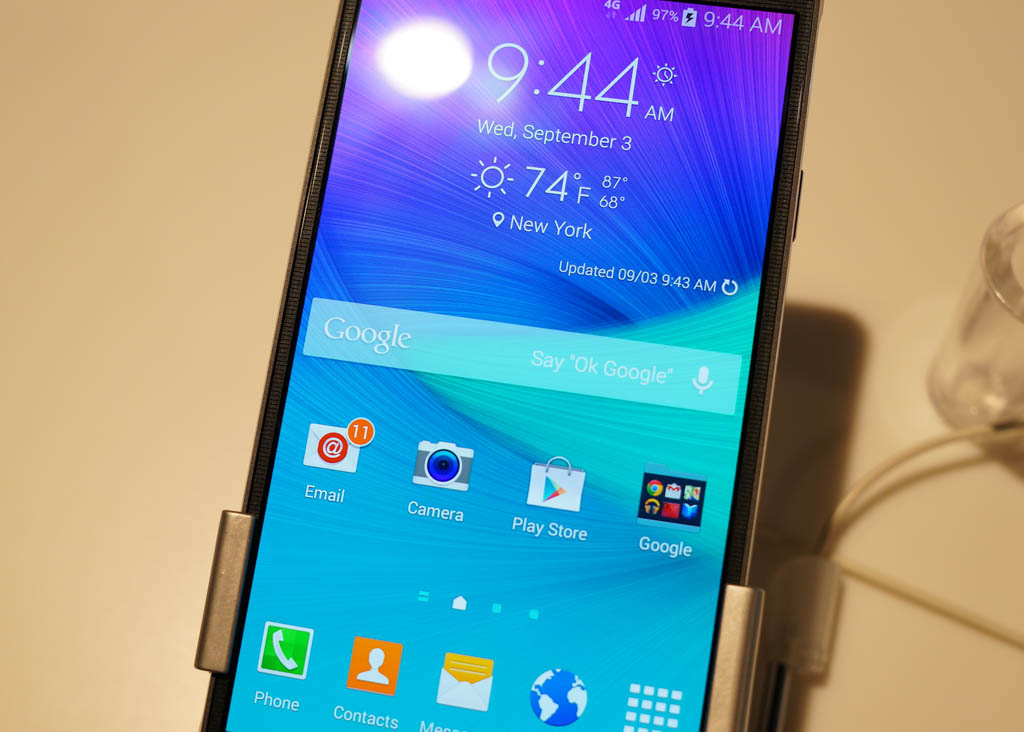 Colour saturation, as expected from Samsung, is extraordinary (perhaps too much), but black levels are perfect, whites seem relatively accurate and viewing angles are comparable to previous models. 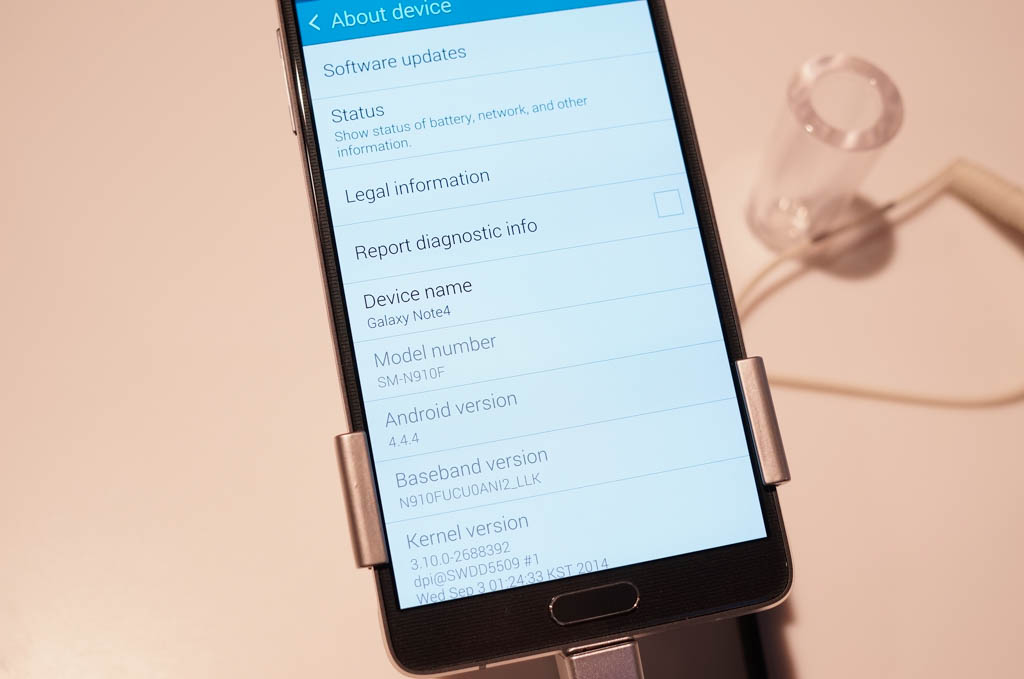 Aiding the screen’s improvements is a flatter user interface based on Android 4.4.4 KitKat. It looks remarkably similar to the Galaxy S5, but spruced up with S Pen improvements — Air Display is still present, though simplified — and a slightly different Flipboard news kiosk called Briefing. 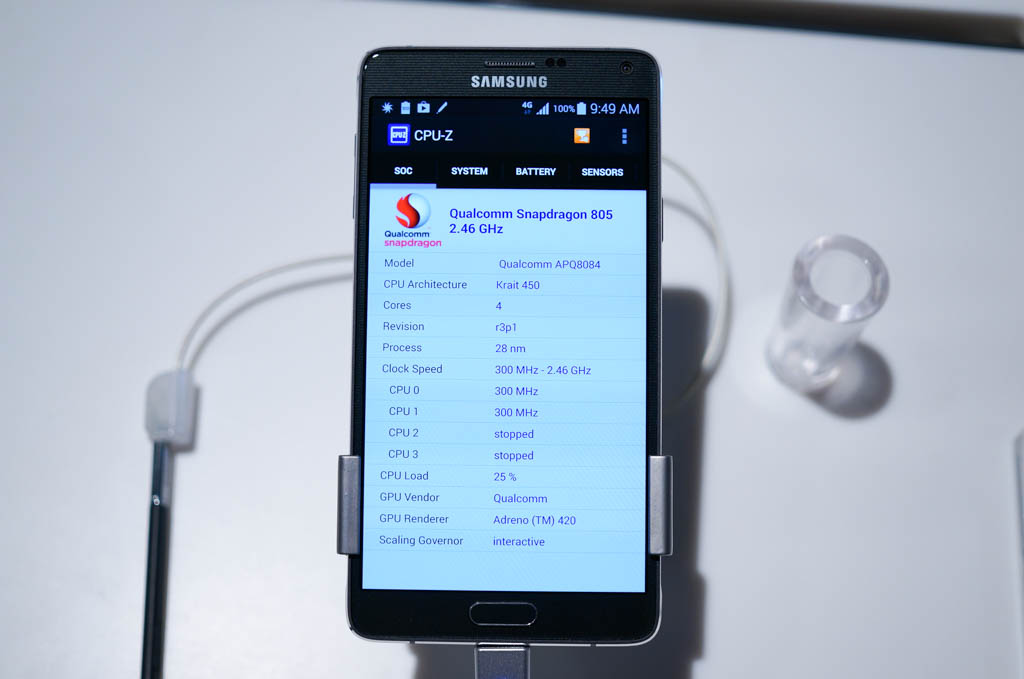 Inside the device is all new: a quad-core 2.7Ghz Snapdragon 805 SoC with a brand new Adreno 420 GPU, 3GB of RAM, 32GB of internal storage and a ridiculous Sunspider result of 385ms. 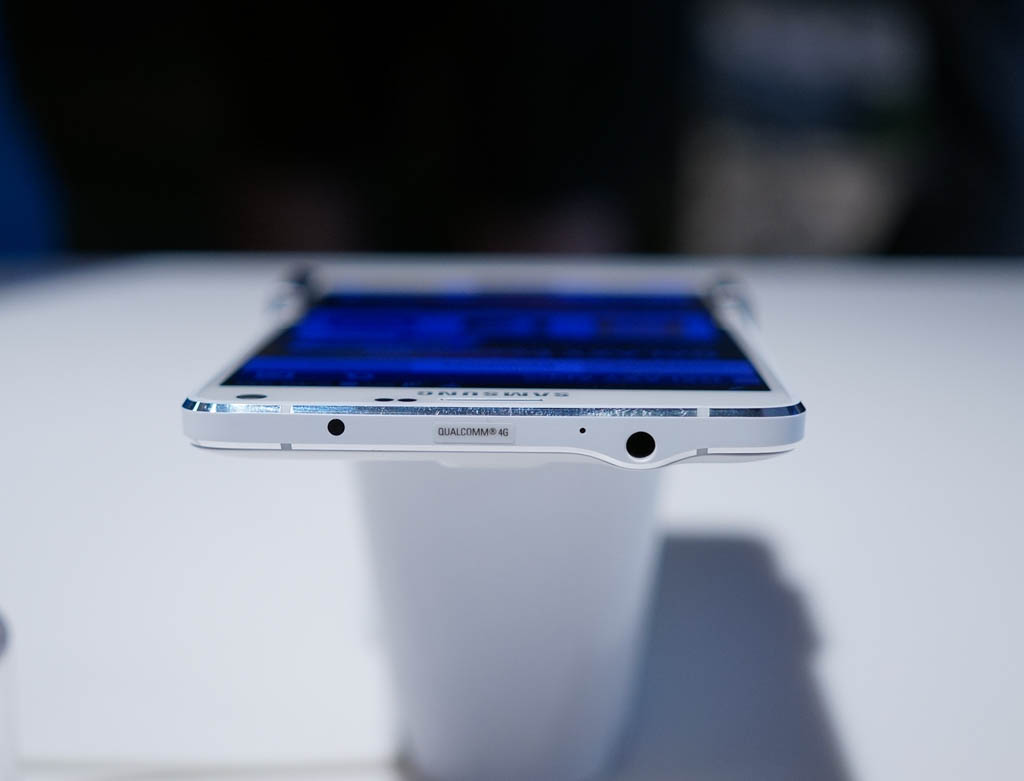 The camera also takes the best of the Galaxy S5 and improves upon it, with a similar (if not identical) 16MP sensor and optical image stabilization. 4K video capture is still limited to five minutes unfortunately, but we’ll live with that now that hardware stabilization is in play.

The front-facing camera is a wide-angle 3.7MP shooter with an f/1.9 lens, meaning that selfies will be lighter and clearer even in low-light scenarios. I’m ecstatic about the addition of OIS to the Note 4, as the Galaxy S5’s camera was severely hampered in low-light scenarios as a result of its omission. 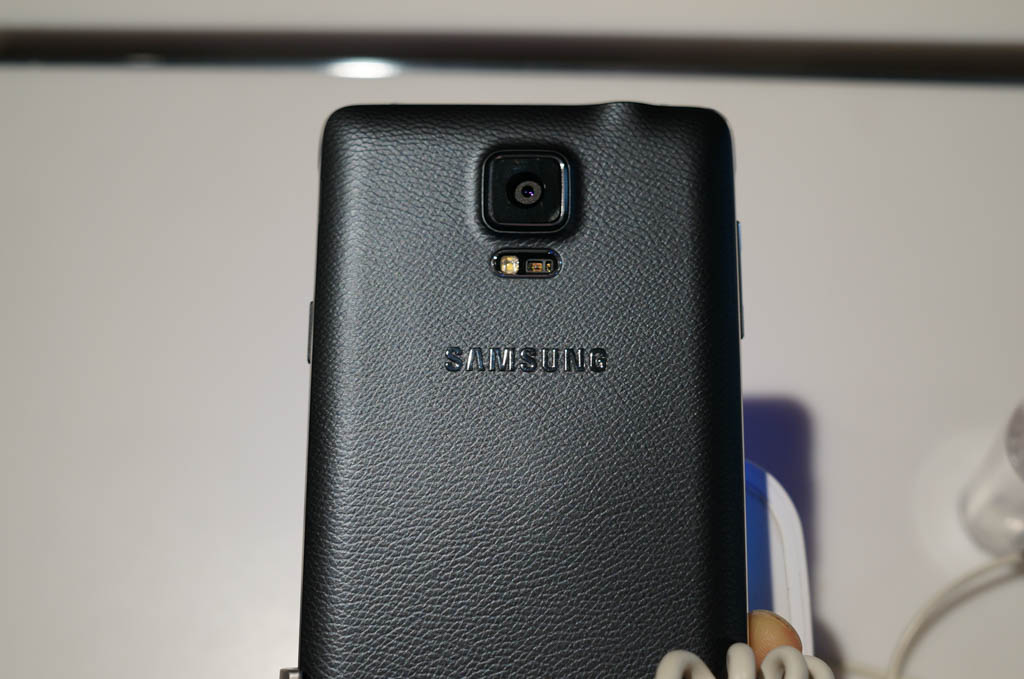 Also present from the S5 is a fingerprint scanner and heart rate sensor, along with Multi Window, Ultra Power Saving Mode and more.

But the Note 4 adds a number of new sensors that may take personal health data to a different place: a UV sensor makes it possible to determine how exposed one is to the sun; and an oxygen saturation sensor, which we didn’t have time to evaluate.

And while neither the Note 4 nor Note Edge have water ingress protection, both sport Adaptive Fast Charging and Quick Charge 2.0, which promise double the charging speed and a 0-50% charge in 30 minutes with the included AC adapters. 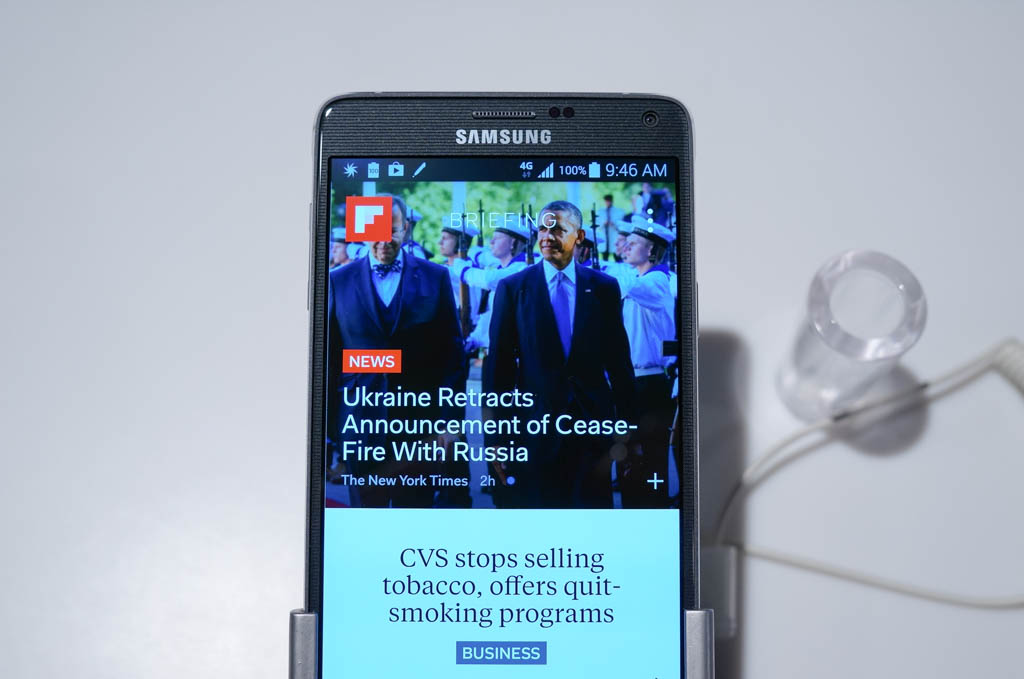 The 3,220 mAh battery is removable, and a modest bump from the 3,200mAh cell in the Note 3. Indeed, it is slightly heavier and thicker than its predecessor, but there’s a good reason for it: the metal frame is a significant upgrade from anything Samsung has previously created.

It feels great in the hand, and the combination with the faux-leather backing (yep, that doesn’t seem to be going anywhere) makes for a much more premium-feeling smartphone. 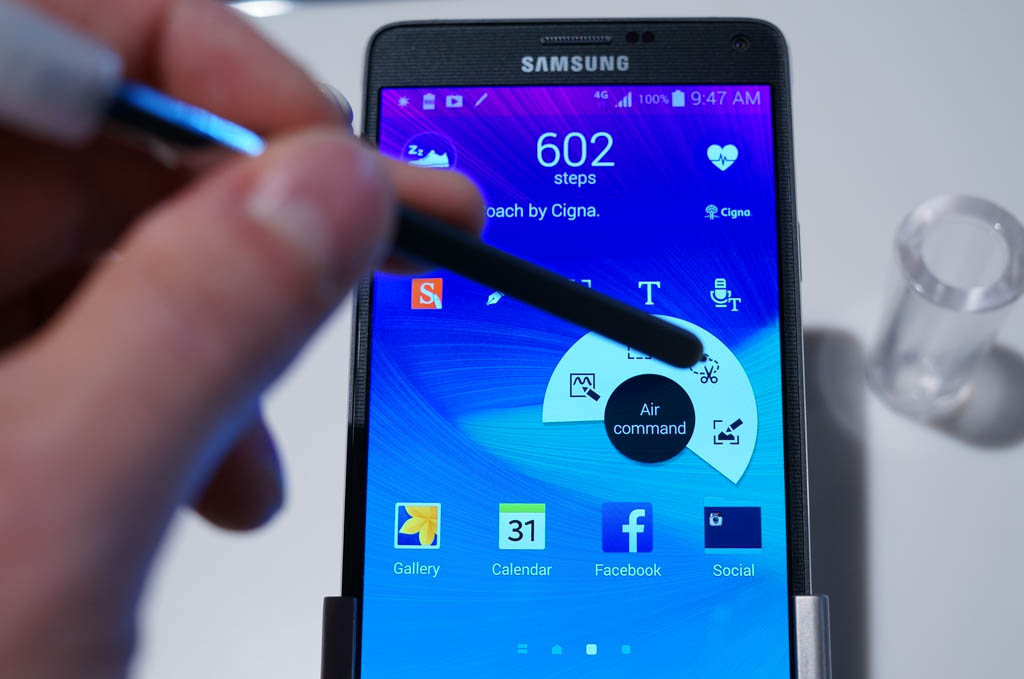 The bottom line is that if you’re already a fan of the phablet, and a user of the Note 3, this is more of the same, just a whole lot better. If you’re coming to the end of your Note or Note 2’s contract, this is going to be an essential upgrade.

Samsung says it will be bringing the Galaxy Note 4 to Canada, but we don’t know when, nor on which carriers.