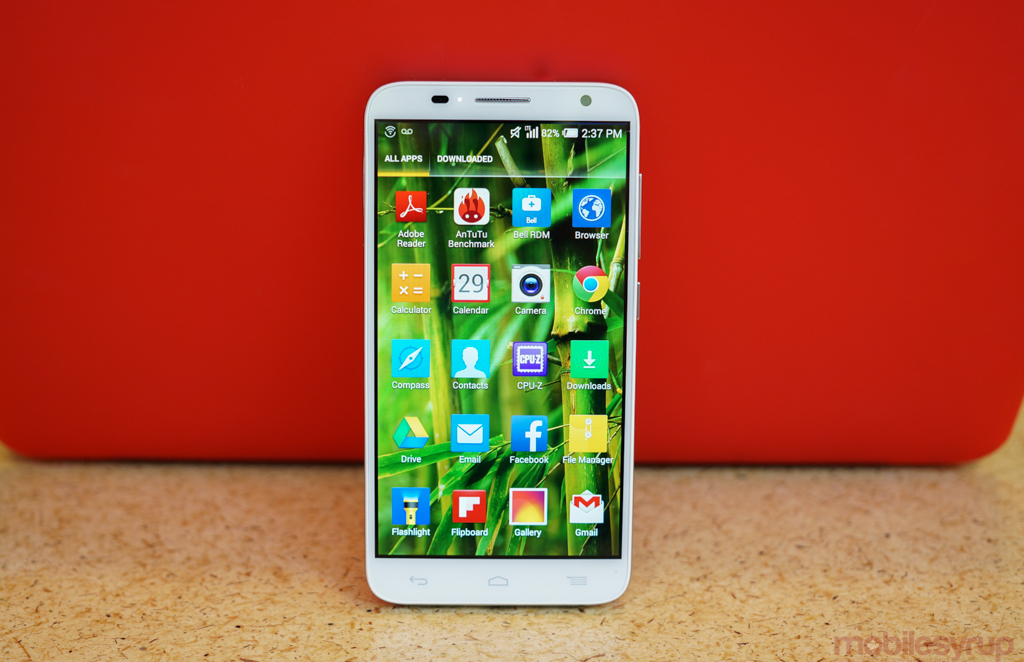 Humans, as creatures of habit, are naturally skeptical of new things. Car buyers who foreswore Japanese and, later, South Korean auto manufacturers quickly learned that there was great value to be had in imports. Later, Chinese OEMs like Huawei, Xiaomi, ZTE, Lenovo and others proved that a company’s age does not always correlate with quality. Wait, are we still talking about cars?

Alcatel OneTouch (AOT) is another Chinese smartphone manufacturer trying to make waves in the North American smartphone market, and recently inked deals with Bell and Telus to bring its mid-range and flagship devices — all significantly cheaper than the equivalent devices from Samsung, LG and HTC — to Canadian shelves.

The Idol 2 S replaces the Idol X on Bell’s lineup, and while the device is certainly eye catching, with near-absent bezels around its 5-inch HD screen and a comfortable matte backing, certain sacrifices were made to reach that coveted $300 price point. Still, the Idol 2 S is, like the Moto G, one of the better-performing mid-range devices on the market today and joins the Sony Xperia T3 as an excellent addition to Bell’s Lite lineup. 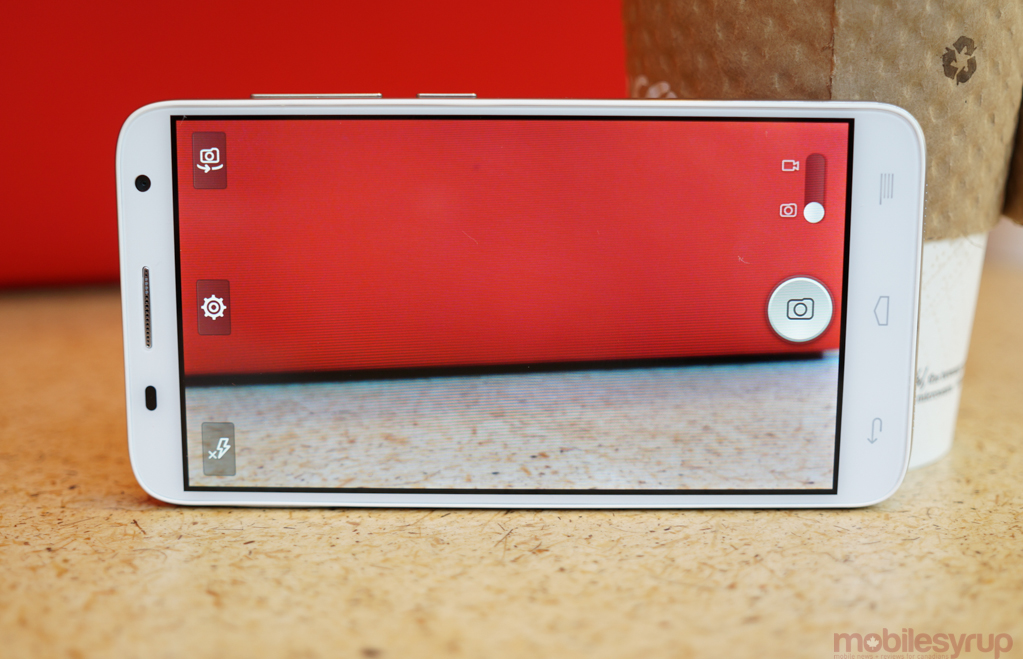 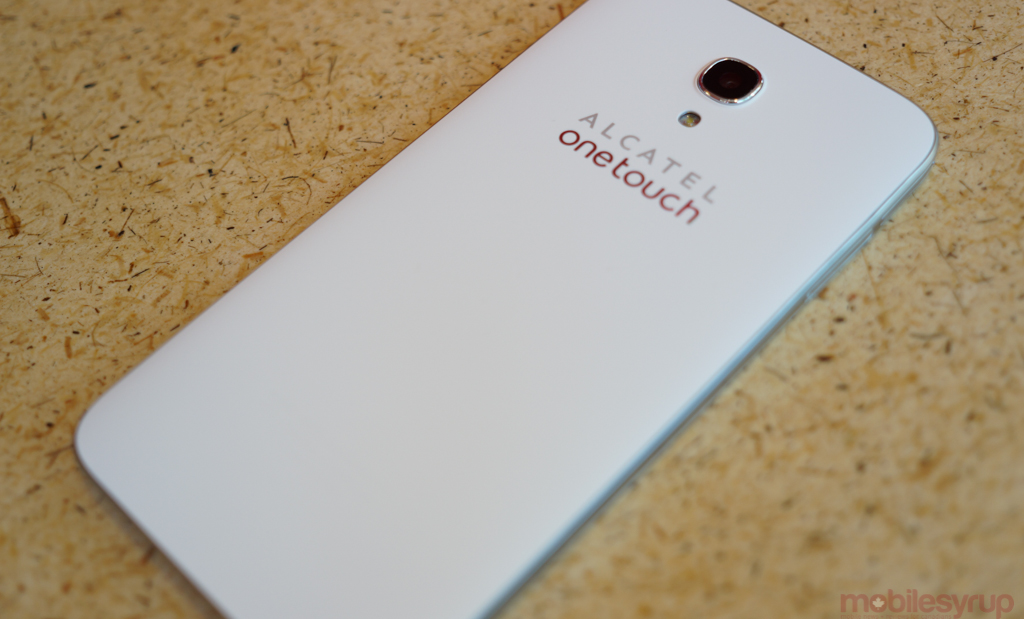 With specs nearly identical to the Moto G LTE, you’d expect the Alcatel OneTouch Idol 2 S to perform similarly, and in many ways you’d be right. The lightly-skinned version of Android 4.3 is unobjectionable, and apps load quickly, with relatively smooth animations. 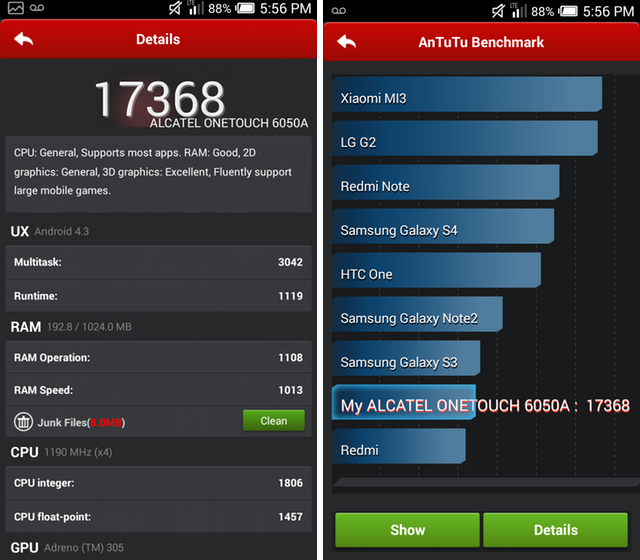 When we reviewed the Idol X in March, we were impressed by almost everything except its performance; despite sporting more RAM, its quad-core MediaTek CPU and and Mali GPU combo were underpowered for the 1080p display. On the Idol 2 S, AOT wisely decided to use Qualcomm’s unified Snapdragon 400 solution, bringing four Cortex-A7 cores, an Adreno 305 GPU and an embedded LTE baseband chip into a single low-power solution. We saw the benefits of this setup on the Moto G and it facilitates some pretty outstanding performance here, too.

To keep costs down, AOT chose to include a 1280×720 pixel IPS display on the device, and while it doesn’t come close to the clarity of the Moto G — the manufacturing process exposes the minute lines of the digitizer — it does have excellent brightness and viewing angles. Indeed, the phone has some of the slimmest screen bezels we’ve seen, at this or any price, and proves that function does not have to trump form at the entry level.

Digging into the OS, while it’s disappointing not to have Android 4.4 KitKat at launch — TELUS’s Idol X+ arrives with 4.4.2 onboard — AOT’s skin is colourful and unobtrusive. It even comes with useful features like “double-tap to switch on” (though not off) and an array of gestures, from muting the device when the screen is turned over to initializing a call when it is held up to one’s face.

The Idol 2 S’s camera is quite good for an 8MP shooter. As we found on the Moto G, performance is mainly limited by the quality of the sensor, not the speed of the processor, and in this case the AOT comes in ahead of Motorola. The 8MP sensor is paired with an f/2.4 lens, which takes decent daytime shots and, at night time, adequate low-light photos.

The flash, like many low-cost smartphones, overexposes the scene more often than not, but it works in a pinch, and we had a great experience with the speed and reliability of the camera app. Users can manually adjust ISO (light sensitivity) and exposure levels, and one-tap HDR, Night and Panorama modes are useful, if underwhelming. 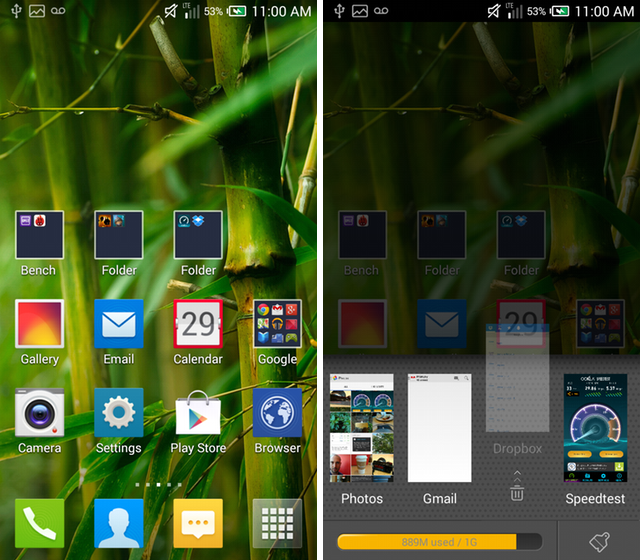 Another bright spot in the software is the fact that the Idol 2 S comes with both SwiftKey and Google Keyboard pre-installed, meaning that Alcatel OneTouch, unlike most OEMs, realized its coding limitations and, instead, chose to benefit consumers with two established choices.

Call quality was good over Bell’s network, and battery life from the modestly-sized 2,150mAh cell was excellent. I used the device extensively for nearly a week and it lasted over 12 hours per day without issue. In our objective battery tests, which loops a video clip until the phone dies, the Idol 2 S lasted 5 hours and 45 minutes, approaching the higher end of average. 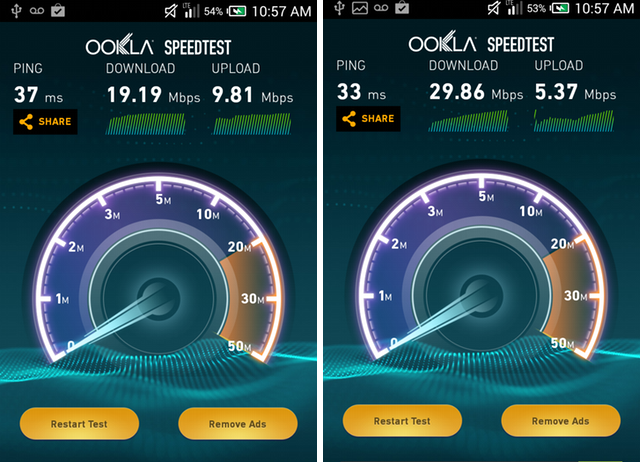 As for LTE speeds, because the Idol 2 S takes advantage of Qualcomm’s extremely mature (and optimized for North America) integrated baseband, I achieved excellent speeds of around 30Mbps down and 10Mbps up in downtown Toronto.

The Idol 2 S exposes a fundamental problem with high-end Android smartphones today. It does everything pretty well — though as we’ll see in the next section, sacrifices are plentiful — and is certainly attractive enough to fit in the pocket or bag of the average discerning smartphone customer. 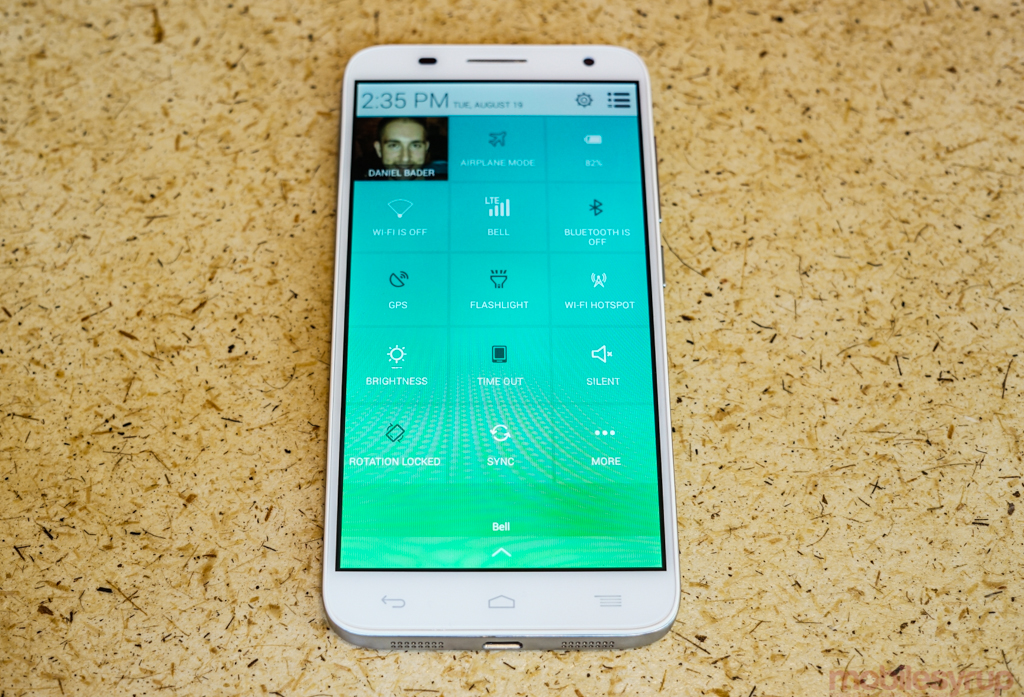 Here’s where things get tricky. How much do you deduct a phone that, for all intents and purposes is comfortable looking like one double its price and performing like one 1.5x its price, for minor idiosyncrasies?

I could fault it for not launching with Android 4.4, which is a concern, but the overall improvements to that OS concerned devices with 512MB of RAM and on-screen navigation buttons. The Idol 2 S uses legacy capacitive buttons, which I certainly take issue with, but this seems to be a cultural thing: Asian consumers prefer larger displays with no on-screen encumbrances, and if Samsung still insists on doing so it’s hard to fault AOT for the same thing. More concerning is that the Idol 2 S comes with a capacitive menu button, for which support, in many instances, has been deprecated.

Pressing the menu button either brings up the selections in the wrong place — at the bottom rather than the top right corner, where they usually are — or causes the app to eliminate the three-button menu button altogether. Neither behaviour is particularly reassuring. 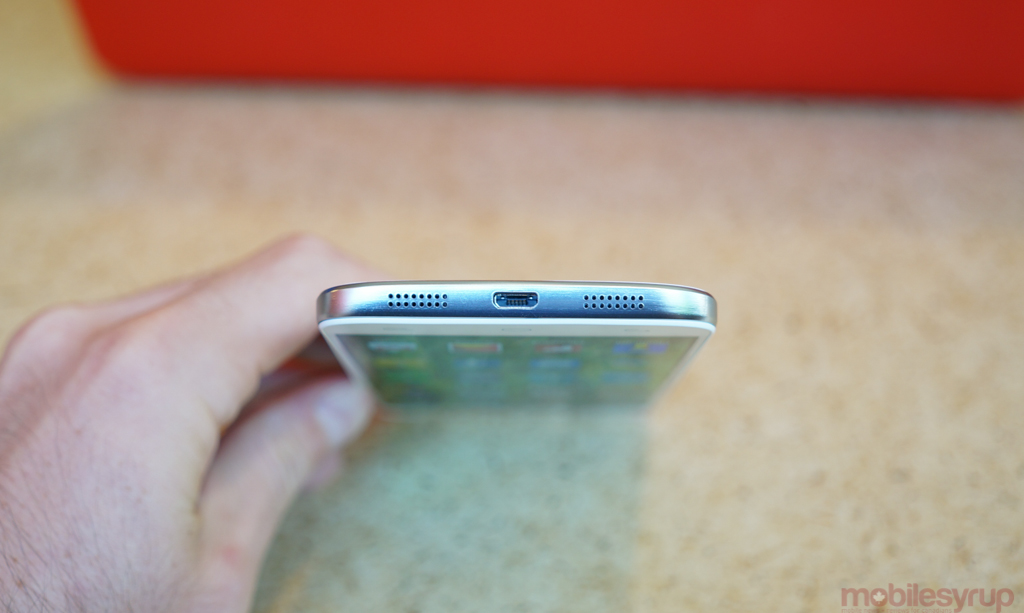 But the Idol 2 S’s biggest issues are with build quality. At a casual glance, the chassis appears to be well made and sturdy, but I quickly found fundamental issues with my review device. A minor deformity at the bottom of the display revealed severe backlight bleed, for example.

The ring of plastic around the device’s perimeter was of low quality and cheap-feeling, scratching too easily. The non-removable back cover was not secure, as if some of the clips were not properly installed, and the camera lens, which protrudes a millimetre, became scratched after only a few days. 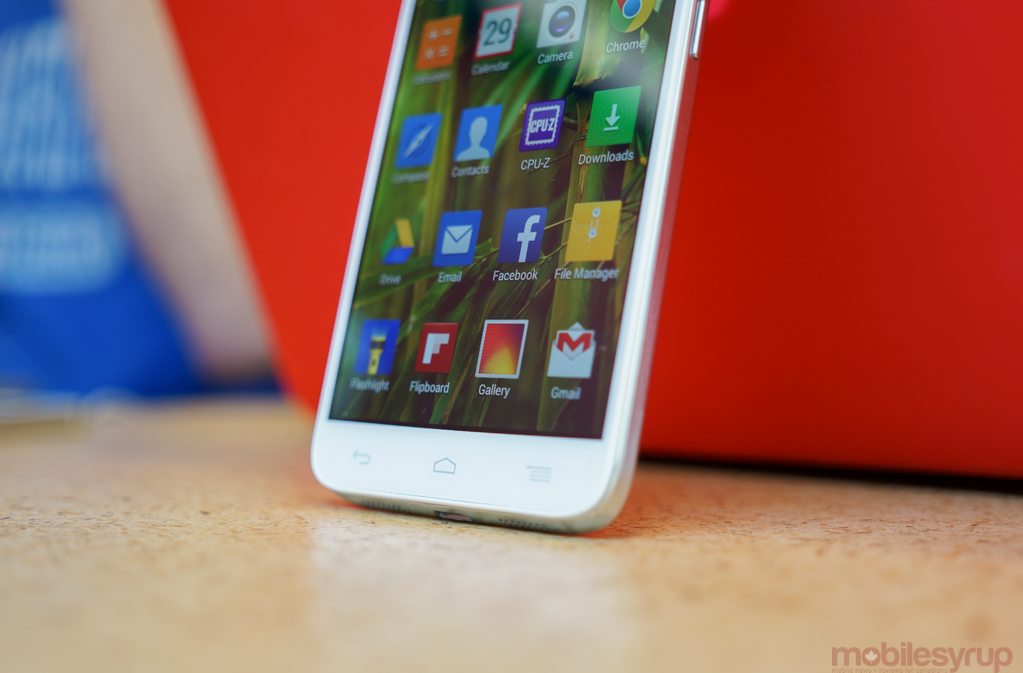