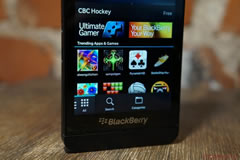 The two companies combined resources to ensure apps within BlackBerry World are safe for BlackBerry 10 users to download. BlackBerry Guardian is a “multi-layered strategy” that involves both automated and manual analysis to vet apps before they show up on the storefront.

While the feature is already active, on the company blog today David MacFarlane, Senior Director of Security Assurance at BlackBerry, wrote that the upcoming Passport and Classic will automatically scan all Android apps, including the recently announced partnership with Amazon Appstore.

In 2012, Google announced its own client and server-side solution for ensuring sideloaded Android apps were free of malware. In the same year, Trend Micro said BlackBerry 7 was the most secure mobile OS, slightly ahead of iOS at the time.

BlackBerry is ready to ‘fight back’ against the competition, launches ‘BlackBer...