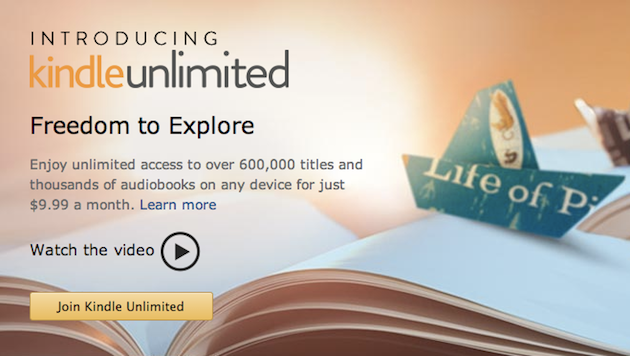 Amazon on Friday launched a new type of subscription service for Kindle users that allows unlimited access to a library of 600,000 e-books and audiobooks for just $10 per month.

Dubbed Kindle Unlimited, the service was first spotted by Kboards user MJAWare earlier this week. Though Amazon didn’t comment on the leak, which came via an official Amazon video, it looked like it was pretty close to launch. Now, just a couple of days after news broke, Amazon has made things official.

Users signing up for Kindle Unlimited will have access to 600,000 Kindle books on Kindle, iOS, Android, Windows Phone, BlackBerry, PC, Mac, and Windows 8 as well as over 2,000 audiobooks from Audible. The first month of Kindle Unlimited is free, and users will also get a three-month Audible membership with access to more than 150,000 Audible titles.

As suspected, this service is U.S.-only, which shouldn’t come as a surprise given Amazon has never been great at bringing new services across the border. We tried to sign up but were turned away with the same ‘U.S.-only’ line we’ve grown weary of hearing from Amazon.  We had been hoping that Amazon would offer details of an international launch once Amazon Unlimited was officially announced, but the company has offered nothing beyond, “Please visit us again when [Kindle Unlimited] is available in your country.”

iPhone 12 Review: The one to buy