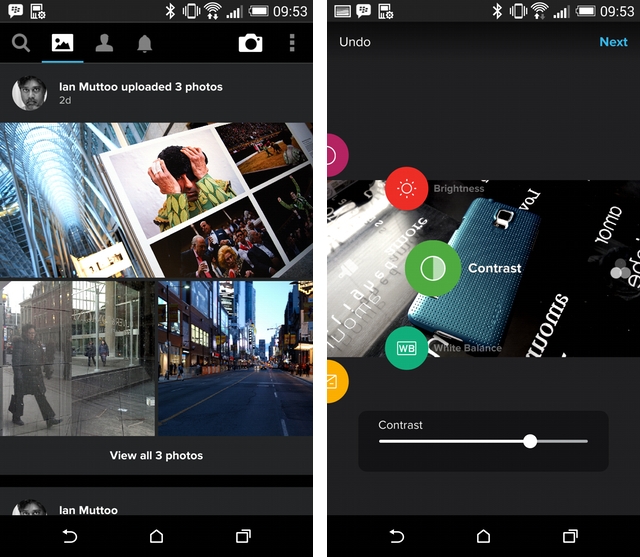 You’d be forgiven for thinking Marissa Mayer hasn’t taken Android as seriously as iOS since becoming CEO of Yahoo. The company has released many crucial updates for its most popular apps in recent months, including the iOS-only News Digest, and Android has often been left by the wayside.

It looks like the situation is beginning to change, if Flickr’s massive overhaul is any indication. The company has released brand new apps for iOS and Android that make navigating the large numbers of Flickr photos more attractive and, for Android at least, taking and managing one’s own photos a breeze.

While both iOS and Android versions look similar, the latter keeps things flowing with a top-level navigation scheme, and places editing controls in a flywheel. Not only does it make post-shot editing much easier, but the app feels much more than a mere iOS port like many photography-centred Android apps.

Also new to Android is the ability to automatically upload photos and videos to Flickr’s site for later perusal. Like Dropbox and Google+, Flickr gives users free storage for all their photos, and keeps them private until they’re explicitly acted on.

Search has also been thoroughly improved, as Yahoo’s acquisition of image-recognition companies is finally bearing fruit.

Some aspects of the Android app (the iOS app wasn’t available at the time of writing) still feel underdeveloped, like the cheap-looking gradient covering the navigation area. And while the app may not bring in a lot of new users, it certainly gives those on Android another great option for photo editing, and improves upon an already-great iOS app.