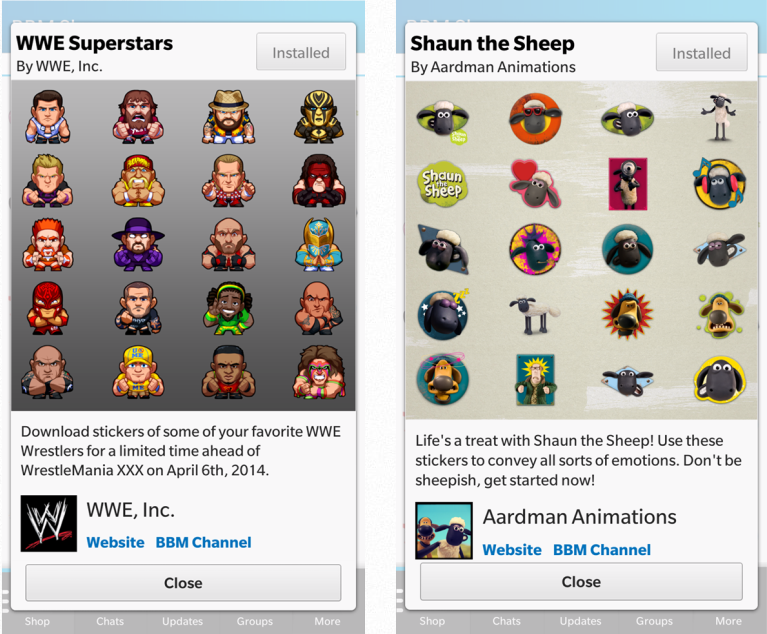 BlackBerry has lobbed its first salvo into the for-profit mobile messaging ecosystem today, adding a Sticker Store to its BBM for Android, iOS, BlackBerry OS and BlackBerry 10 products.

Last week, the company told us it would be updating the apps to support stickers, which are “larger, bolder and more expressive images than emoticons,” with both free and paid packs.

Each sticker pack has between 20 and 25 choices, ranging in theme from Shaun the Sheep (kids!) to WWE (adults!). The delineation between demographics is clear, but BlackBerry is attempting to hone the appeal across all ages and user types. The paid sticker packs will start at $1.99USD as an in-app purchase, though there will be many free options available, too. BlackBerry has also commissioned its own branded sticker packs.

The new update also includes photo sharing in multi-person chats and larger file sizes, up to 16MB from 10MB. Of course, BlackBerry still touts BBM as the fastest and most reliable messenger on the planet, but its 85 million user base doesn’t seem to be growing nearly as quickly as some of its competitors, including WhatsApp.